Sometimes it’s questionable whether it’s worth going sleep before the start of a trip, and in this case the need to be ready for a taxi at 03:45 did raise that question. For this trip I was flying from Birmingham Airport as I often do, and would be meeting a friend at Munich airport as we both switched to a connecting flight to Saint Petersburg.

It was a sleepy start but the check-in was easy, and by 05:00 I’d dropped off my checked luggage and was through security. I had hoped to get a little sleep during the taxi ride to the airport, though every time I closed my eyes to sleep the driver started to talk to me. I did wonder if it was a tactic to help him ignore the flashing engine warning light on his dashboard he’d attempted to hide with masking tape unsuccessfully. The only peace I got was whilst waiting in the petrol station.

Due to having two short flights, and little time in between them I decided my best chance for getting lunch would be to buy something from Birmingham Airport whilst waiting around. This turned out to be more difficult than expected when I found WH Smiths had nothing by mayonnaise-filled sandwiches but I was lucky that they also had a Boots that sold them.

The flight to Munich was short, and 1hr35 after leaving Birmingham I was deplaning and on my way to the gate for the next flight. Here I met up with James, the friend I’d be travelling with for the next two weeks. Around two hours after having touched down I was on my way again, ten minutes late, on the last leg of the journey to Saint Petersburg.

The plane touched down at 15:40 local time, almost 10 hours after I’d left home, and even with a slow baggage collection was out of the airport in around 35 minutes. Not bad by any countries standard. The guide we’d have for the next few days met us on the way out and wondered what had happened to us as she thought we should have landed on a British Airways flight from London over an hour ago. It turned out that despite telling Audley Travel many times what our flight numbers were, and correcting them on many occasions, they’d told the local guide the wrong flight numbers. It didn’t strike us with much confidence that they’d get it right for the flights at the end of the trip either. 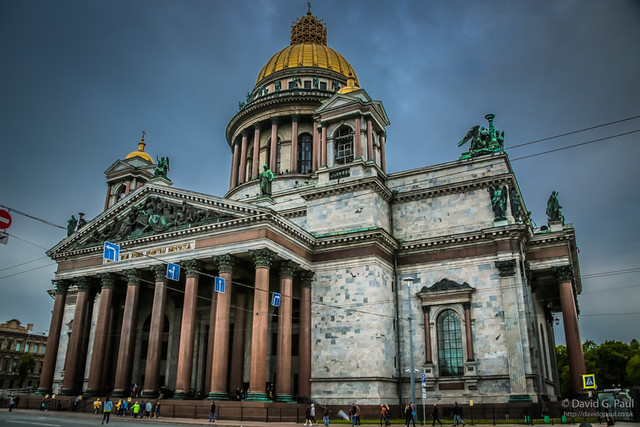 The hotel was a little over 30 minutes from the airport and in the centre of town, right next to Saint Isaac’s Cathedral. The room however had been made up as a double instead of a twin so we had to get this sorted with reception. The room however was well positioned with a fantastic view of the square and the cathedral. To give them time to sort the room we both grabbed our cameras and headed out into the city. 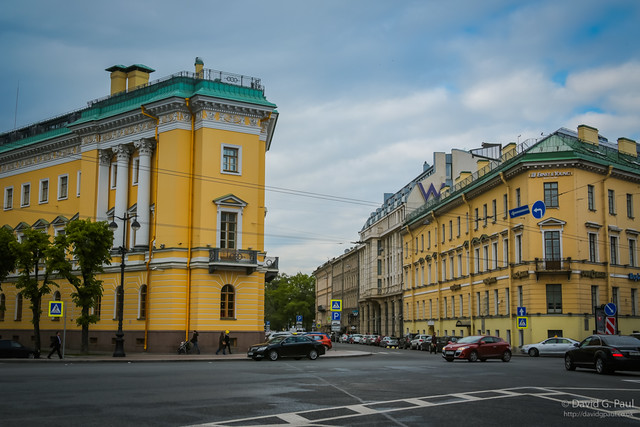 To start with we headed over to the cathedral to see what it’s opening times were, but they were closing the ticket office just as we got there. Instead we decided we’d have a look around the nearby parts of the city to see where we could get an evening meal. I’d remembered there was an area to the south east of the hotel that was supposed to have a large number of food places, but all I could remember was the name “prospekt”. A name which it turns out is very common for streets in Russia, or at least in Saint Petersburg. 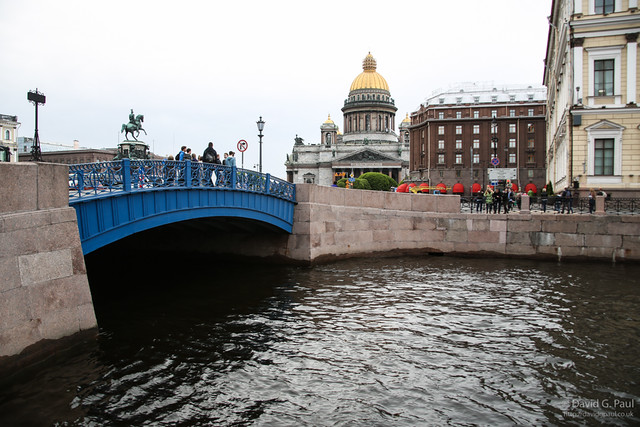 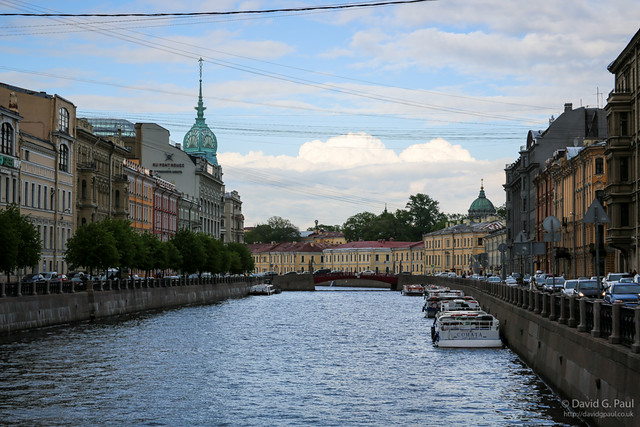 We picked a direction, west, and headed as far as we could go before reaching a dead-end. Having back-tracked back to the square in front of the cathedral we crossed the Moyka River and headed along it keeping an eye out. At the same time as spotting a McDonalds and KFC we spotted an English pub called the Oldham. It seemed to be a reasonable place to eat so went decided on this one. I went for a 280g steak in peppercorn sauce, and with a fizzy drink and tip this cost me only 1200 roubles – the equivalent to about £12.

It had started to spit with rain shortly after leaving the pub, and we’d both had every long days so headed back to the hotel for the end of our first day in Russia.