Unable to sleep passed 05:30 I decided to get up and put the time to some use on my iPad. Eventually we headed out to meet my friend at his hotel before continuing on to The Flame Diner where we were going to get breakfast. It was quite a bit further than I thought it would be, but it was in the direction of where we would be touring later in the day. Once there I had a sausage sandwich, and also got a blueberry muffin to go. 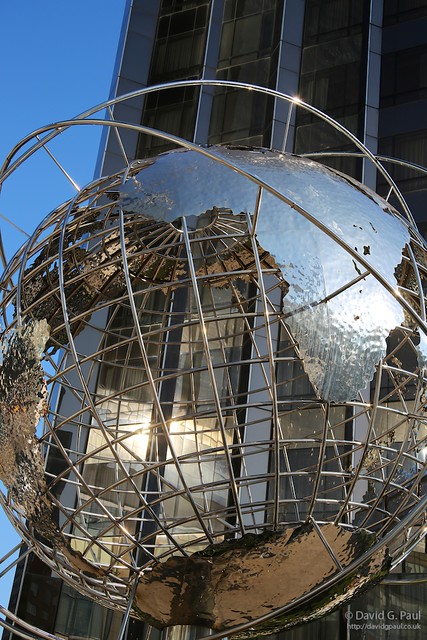 It wasn’t far from there to the corner of Central Park where we photographed the globe outside of the Trump Tower before going into the park. It seemed that we were wandering fairly aimlessly around Central Park, but the plan was to get up at least as far as halfway. The paths wind around quite a bit inside the Park and you also have roads running through it, as I’d already realised from my run the day before. 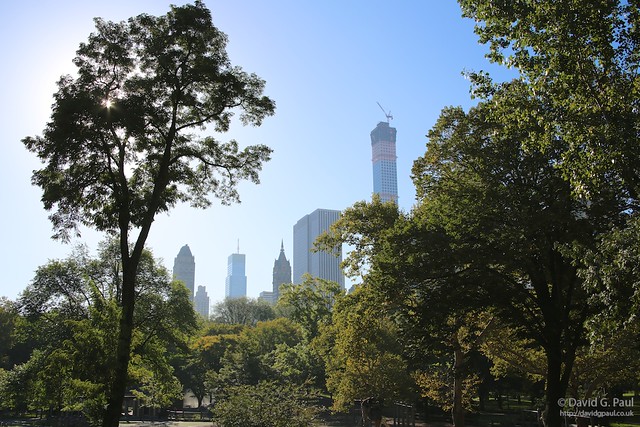 After a while we stopped at a bench overlooking The Lake, and ate some of the blueberry muffins we’d bought. The path from there then took us on eventually to Strawberry Fields. Strawberry Fields is a section of Central Park named after the Beatles song “Strawberry Fields Forever” (which in turn refers to the name of a Salvation Army building in Liverpool, England). The significance of this park is that it is dedicated to the memory of John Lennon, the former singer and songwriter from The Beatles who lived and was killed outside of the Dakota Apartments building. Inside this area there is a mosaic which says “Imagine” – which is also the title of one of Lennon’s most famous songs. 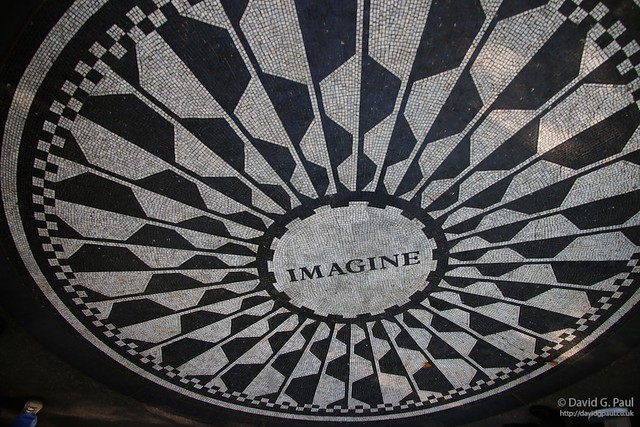 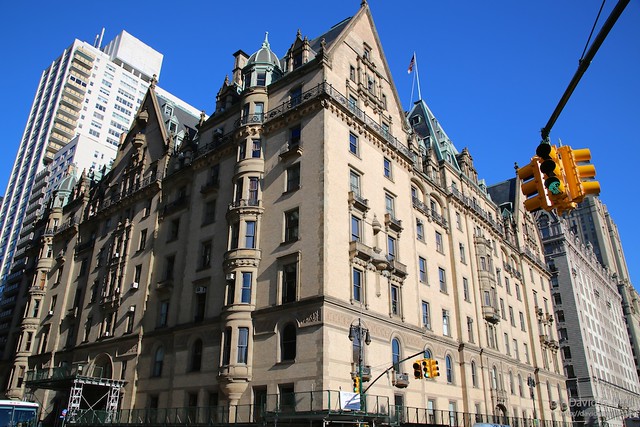 Just outside Central Park there at 72nd Street, you can see The Dakota. In addition to John Lennon’s connection to the building, it was also used in the filming of the movie “Rosemary’s Baby”, and is one of the most expensive and prestigious apartment blocks in the city. Once we’d taken a couple of photographs there we headed back into Central Park and continued north until we got through The Rambles to Belvedere Castle. 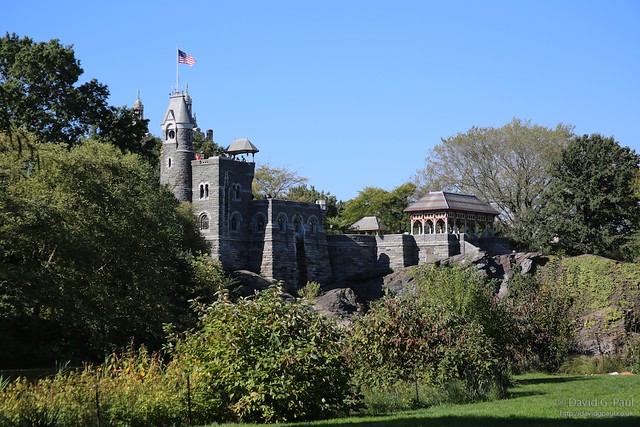 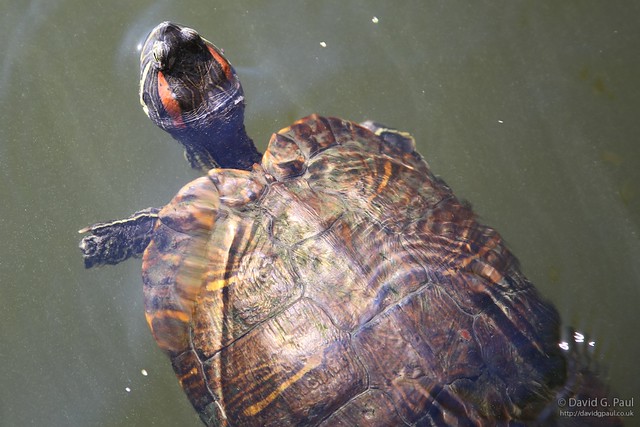 This castle, originally built as a folly, allows you to go in free of charge and provides a good view of Turtle Pond. As it happens the pond is aptly named as it does indeed contain turtles. Once we spotted the turtles we headed down alongside the Delacorte Theatre to get closer to the pond. Outside the theatre we passed two statues: one from Romeo and Juliet, and the other from The Tempest – both of which are well known William Shakespeare plays that are likely to have been performed at the theatre at some point. 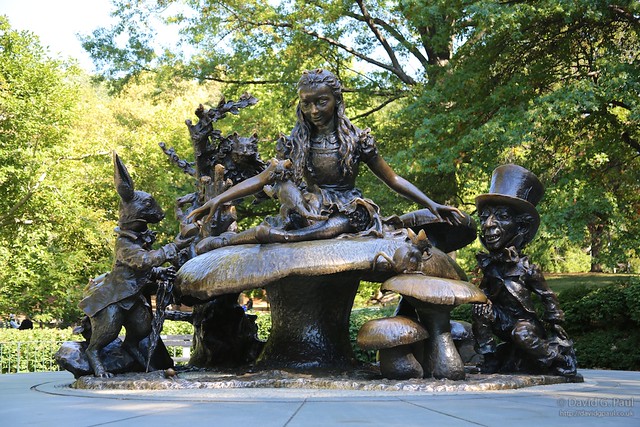 Alongside this theatre there is a viewpoint where you can look back at the castle, but more importantly get a closer look at the turtles. We spent some time there before moving on down Cedar Hill to a statue of Alice in Wonderland. Around this area there is also the Conservatory Pond and a statue of Hans Christian Andersen, the prolific author famous for his many fairy tales and stories. We continued along that path and after going through a zoo eventually came out of the park on Grand Army Plaza. 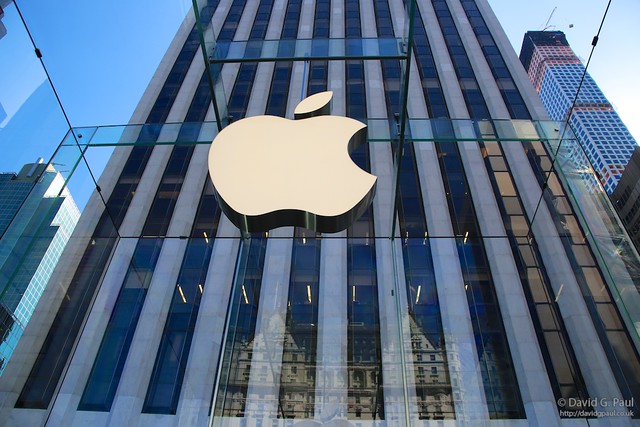 As we walked down Fifth Avenue our first stop was at the Apple Store. The reason for visiting this was because its entrance is an impressive glass cube with an Apple logo suspended from the roof, and a glass staircase down into the store. My sister then got us to visit the Louis Vuitton store, but we didn’t stay in there long thankfully. We continued our walk down Fifth Avenue, seeing what shops they had there, and eventually going in a gift shop to get some more souvenirs. It seemed like this walk lasted a long time, but eventually we found the turning for Grand Central Terminal. 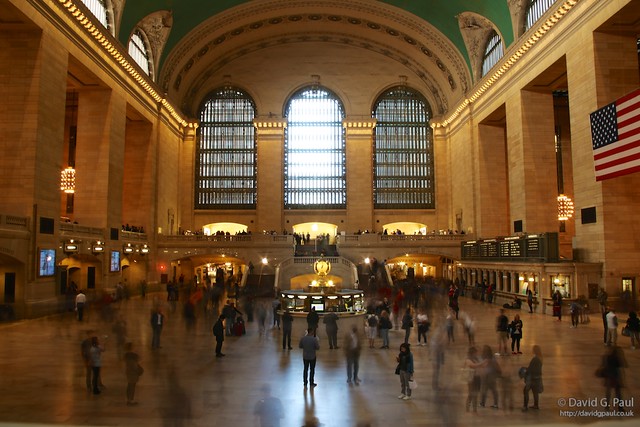 The terminal building is quite impressive from the outside and indoors it seems very grand, though I found it to be poorly lit. I attempted a long exposure photograph here to try and capture the busyness of the place, but it didn’t really work – I needed a much longer exposure than the equipment I had on me would allow. My sister tried to sit on the steps here whilst we took photographs but two police officers asked her not to do that.

Leaving the terminal, by pure chance we glanced behind us and spotted the Chrysler building and so managed to take a few photographs of that too on our way back to Fifth Avenue. As it was around 12:30 by this time we decided to get a hot dog from one of the street vendors. It tasted pretty good, but there wasn’t really much to it. I expected a hotdog to be big, just like the servings you get in American restaurants. Instead the hotdog you get isn’t much thicker than a pen, but you can add toppings of tomato ketchup, mustard and onions. 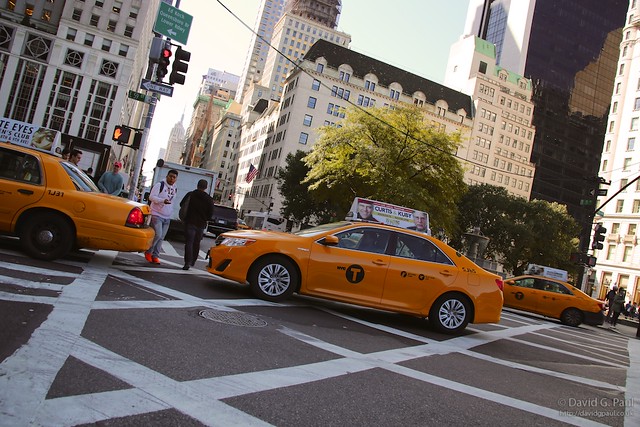 Once we’d finished our hotdogs we carried on heading south until we reached the entrance of the Empire State Building. Outside of here people were trying to sell tickets, making out it was an hour and a half wait to get to the top. We decided to ignore this and see for ourselves. It was a good job we had as well as it turned out there was hardly any queuing inside. 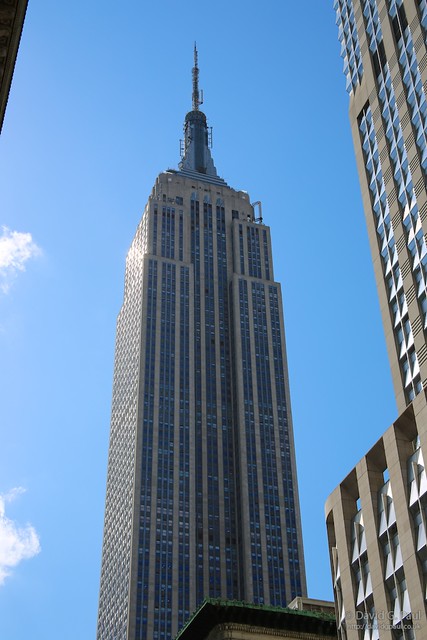 The lobby for the Empire State Building is quite impressive and the art deco style reminded me a lot of what was used in a computer game called Bioshock. Personally I would be quite happy to see more building interiors using the art deco style, but I think that would make it slightly “less special”. 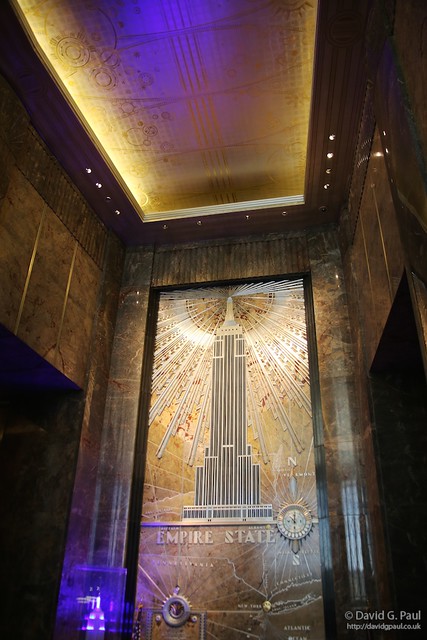 Before you even buy tickets you go through airport-like security, and then at the ticket office you get a choice of options. We went for the standard ticket that would take us to the observation deck. For this there was some queueing to get in the lifts that would take us up, but it was not a long wait. Due to the height and age of the building you can’t get to the top in one go and have to change lifts on the 80th floor. 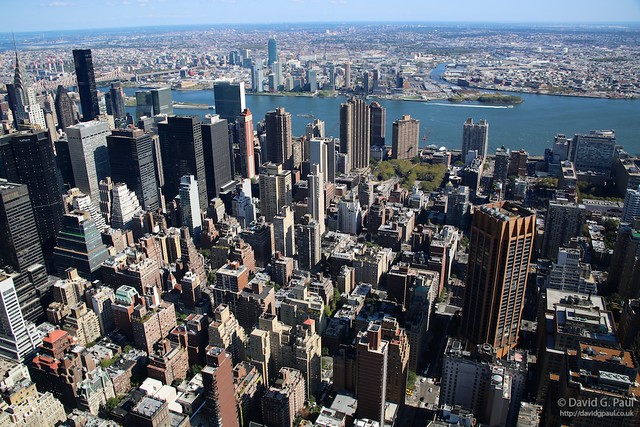 I was surprised that outside at the top it wasn’t as windy or as cold as I was expecting. It was quite pleasant which meant there was no rush to finish. We casually wandered around all four sides taking photographs of Manhattan. Eventually we’d taken as many photographs as we wanted and headed back down. The wait to get down was a little longer, but wasn’t that bad. As is usual though the exit is through the gift shop, but I couldn’t see anything that didn’t seem tacky or overpriced.

By now our legs were starting to ache – my left knee and both calves at the least were aching, though this may have been due to the previous day’s run. To give ourselves a rest we stopped by a nearby Dunkin Donuts. I had a Boston Cream Donut and a hot chocolate, both of which tasted very good, and were of course very unhealthy. 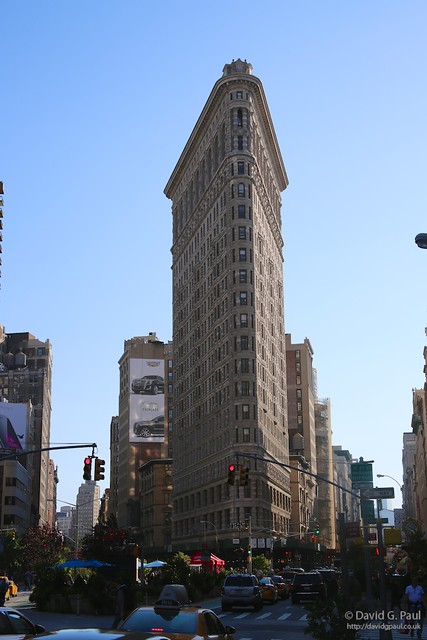 To finish off our travelling south for the day, we carried on down to where the Flatiron building is located. This iconic building was owned and constructed by the Fuller Company in 1902 after a year of work. It was one of the first skyscrapers in New York City to be built using a steel frame after local building laws were relaxed.

After taking a few photographs we then crossed through Madison Square Park before heading back up to where Macy’s is located. We then took the metro from there up to 47th Street to find our way to the Rockefeller Centre. Before we found the entrance though we managed to find Radio City, a famous venue that many big artists have played at. Radio City is actually part of the Rockefeller Centre and an important part of it’s history in broadcasting. 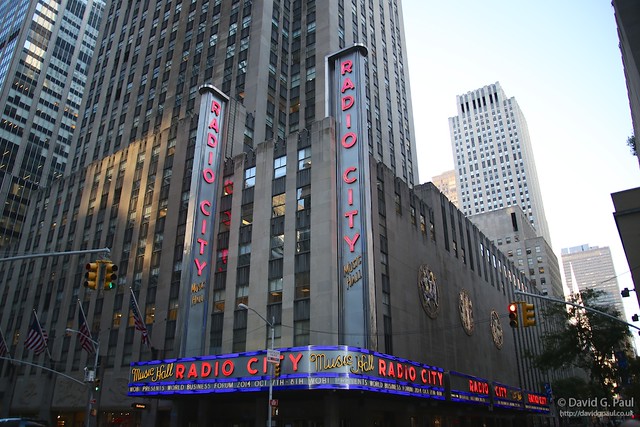 Eventually we found the main entrance to the Rockefeller Centre, the home of NBC Universal; but we didn’t go in. By the time we had found it the sun was starting to set so we decided we’d return another day, and we had already been to the top of one skyscraper.

Instead we walked across to Times Square to see what it was like. It was quite busy and there was a fair amount of construction and road works going on too. We decided we’d return at night and headed back to the hotels to drop off our bags. I also picked up a lens for my phone, but found later we couldn’t take pictures with that at the theatre either due to a local law.

We headed back out and ate at Patzeria Family & Friends, a nice Italian restaurant on 48th street. I went for a 10″ Neapolitan pizza with meatballs, pepperoni, and roasted peppers. It was a very nice pizza, though very filling. The only downside was how strong the smell of incense was from their neighbouring establishment, it was a little overpowering at times.

Once we’d finished our meal we headed on to Times Square where I took a few photos with my iPhone. However, I intended on returning with my DSLR some other time to attempt to do a better job of taking photos. 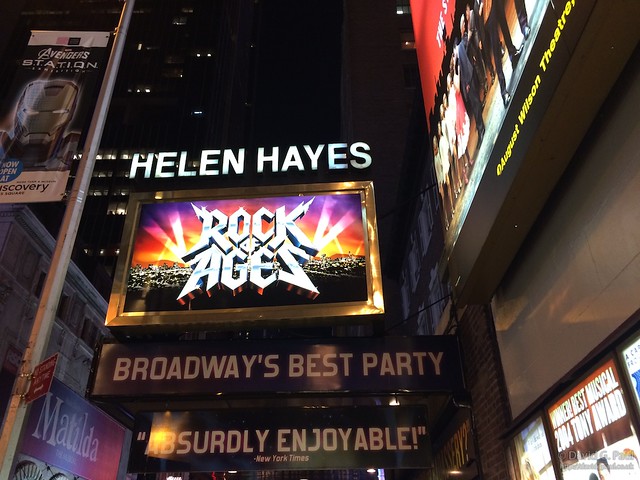 To end the day we headed around the corner to the Helen Hayes Theatre, a place next door to where we’d be in the morning for the Marvel exhibition. When we got there it was still fairly early so there weren’t many people there.

To start with we weren’t sure if the people outside were in a line or not, and when we asked them they said they weren’t. We then went to the ticket kiosk and found that it was in fact the queue. We went back outside and joined the queue until just after 19:30 when we got to go in and take our seats. I bought a CD on the way in as I thought it’d be nice to have a souvenir from Broadway.

The show we had gone to see was Rock of Ages, and it was very good. The only negatives from my point of view was the cramped leg room, the German in front of me being too tall so he obstructed my view, and the fact it was every cold due to us sitting underneath an air vent for the air conditioning. I’d seen the movie of this before and I did spot a few differences, but it was very enjoyable with many songs from the 80s that I recognised. On the way out I then bought a t-shirt.