I had more or less decided I wouldn’t be running in the morning as I had been too tired the night before. As it happens though I awoke at 03:35, around 5 hours after returning to the hotel the during the night, and felt quite awake so I decided I would go out for a long run. By 04:10 I’d made a start and ran towards Central Park. I found the park didn’t open until 6am so ran around its perimeter, pausing regularly for the many roads the cross into the park. 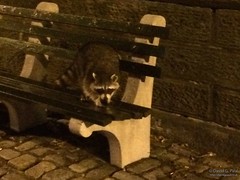 By the time I’d done I’d run two and a half times around it, passing a few interesting buildings including the Apple store, but had also seen some raccoons and rats. After 3 hours had passed I had completed 21 miles, and went back to the hotel to shower and eat an almond croissant for breakfast.

We had pre-booked tickets for a Statue of Liberty cruise so we had to be at Battery Park by 09:00. Thankfully we found a metro station on 49th that would take us all the way down to South Ferry. We decided on an unlimited metrocard that would last us 7 days as we didn’t know how often we’d need it and it seemed comparatively cheap. The journey took around 20 minutes and it was then a short walk across Battery Park to a place we could redeem our prepaid voucher to get the tickets. 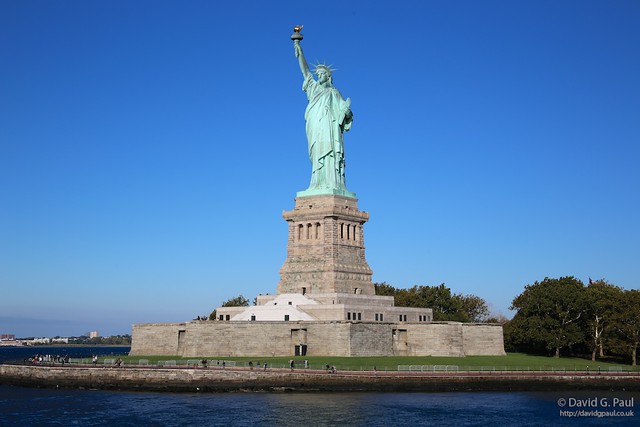 Before boarding the ferry you have to go through an airport-like security checkpoint where your bags and belongings are scanned before boarding. Eventually we made it onto the ferry and stood around on the top deck. Unfortunately it was very cold in the wind, but we wanted to make sure we got photos of the statue as we approached it. I’d read that this was the best time to see it, but also tried to take advantage of the views of Manhattan that it provided. On the ferry they also sell food, drink, and some basic souvenirs – as I’d not drank much up to that point after the run I decided it’d be a good chance to rehydrate before making landfall. 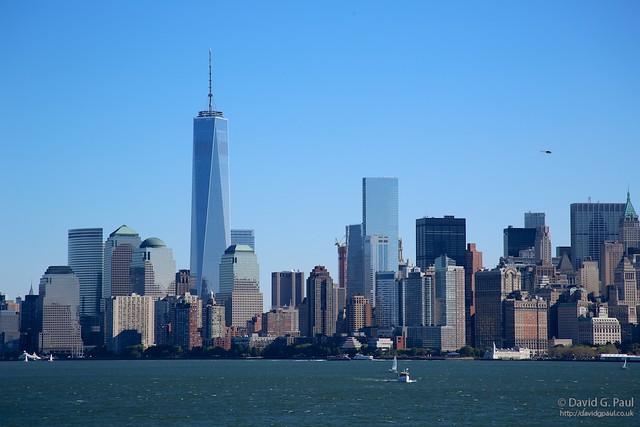 Once we had arrived at Liberty Island it was then a short walk around to the pedestal where there was yet another security check. It starts off with having to put bags in lockers as you can only take water and cameras up there. This isn’t just for security, it’s also because there simply isn’t room for bags if you plan on going up into the crown of the statue. It is then another airport-like check with scanners before you are then finally allowed into the pedestal.

From what I understand there had been a lot of concern previously about the security of this UNESCO World Heritage site – between hurricane Sandy and the terrorist attack that New York had suffered it had only just recently re-opened to tourists. 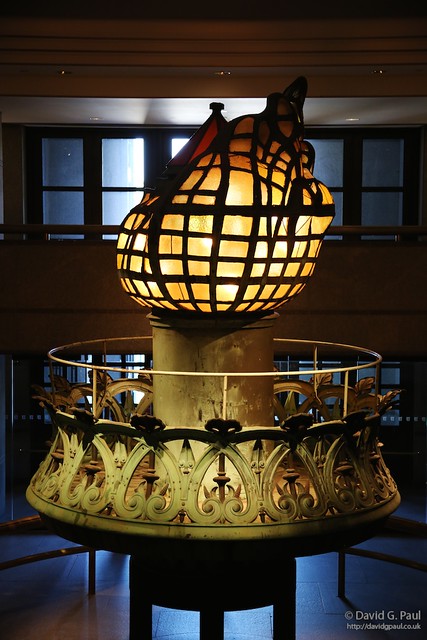 In the pedestal there is a museum that details the design by French sculpture Frédéric Auguste Bartholdi, and the construction of the national monument since it was gifted to the United States of America by the French. This includes the different designs they came up with for the pedestal upon which it now sits. You can then either take a lift up to the top of the pedestal, or take the stairs. Although my legs were aching from the previous run we took the stairs as it was only a few flights. There isn’t really much to see from the top of the pedestal so we quickly moved on. 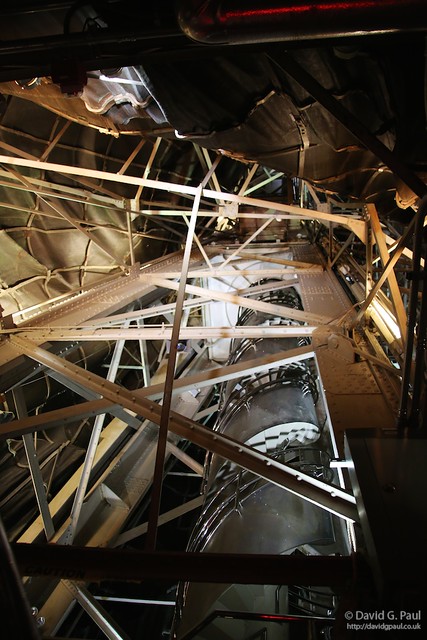 The climb to the crown of the Statue of Liberty is one my sister did not find easy. My friend had gone on ahead whilst I stayed behind to make sure my sister could make it up the tight corkscrew staircase. She took it slowly, but eventually she was able to get to the top without the height getting to her too much. 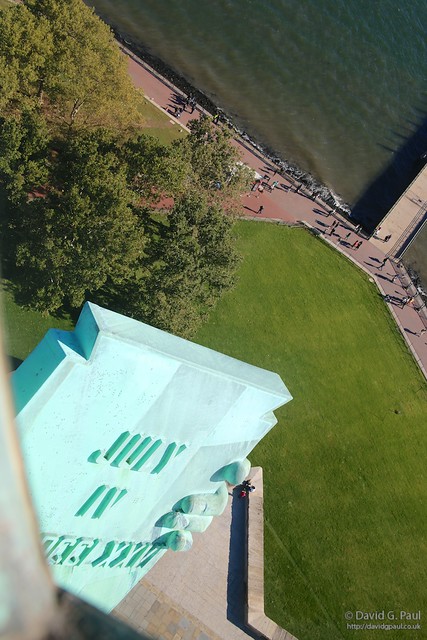 At the top you can see out over the surrounding Liberty Island, and down on the tabula ansata – the tablet of law, inscribed with the date of the American Independence, that the statue holds. Whilst up there we could feel the statue rock slightly in the wind, something both my friend and sister could have done without me mentioning to them. The two National Park rangers standing at the top also discussed some of the history of this island, particularly surrounding the history of alcohol on the island.

Looking at just the right angle out of the window you could also see part of the torch that the statue carries. The torch would allow a higher view, though access has been closed to the public for safety reasons since 1916. After a few photos we then went back down, my sister sitting on every step of the staircase as she went, a way for her to cope with the steepness and height of the steps.

After we had descended and collected our bags we decided most of what the gift shop sold was cheap rubbish (a bit harsh, but the moulds used in the models lacked so much detail). So we headed back to the ferry which after a short wait for it to arrive, then took us on to Ellis Island. 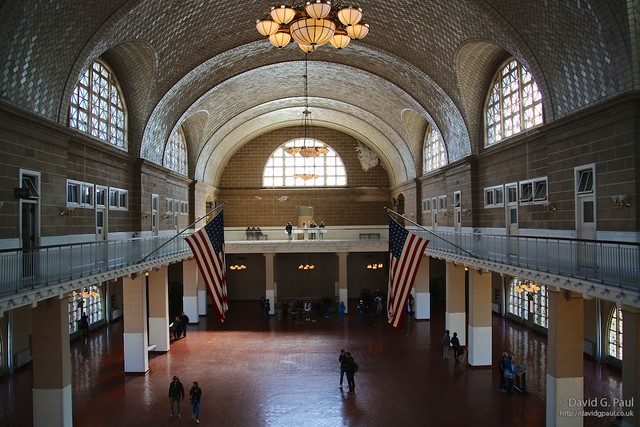 Ellis Island is famous as being one of the major immigration points for the United States in the past. A lot of it’s landmass comes from land reclamation that took place in the early 1900’s using mostly waste from the construction of the underground – this allowed for the facility to grow in size to accommodate the massive demand. It is estimated that one in three Americans can trace their ancestry back to immigrants that came through Ellis Island.

The museum is in the main building and spans three floors to cover its history. Unfortunately all of the artefacts had been removed in 2012 after hurricane Sandy had caused damage and they could no longer be climate controlled. This has meant the museum was closed for months whilst repair work took place and they estimated the museum would be back to normal sometime in 2015. 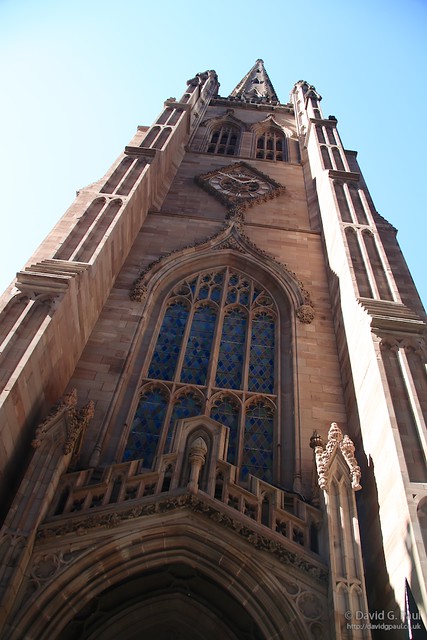 At the end of the tour it had gotten to midday so we decided to eat outside in the sun at the restaurant there. I went for a barbeque chicken sandwich with crisps (or chips as the Americans call them), and a red velvet cake. I thought the sandwich was very nice and it was good to eat something proper after an almost non-existent breakfast. Whilst we ate we saw three V-22 Ospreys fly over head – a type of aircraft I’d never seen previously. The gift shop here was better, and bigger than on Liberty Island. I decided to buy a Statue of Liberty model for $34, whilst my sister bought a bear and a snow globe. 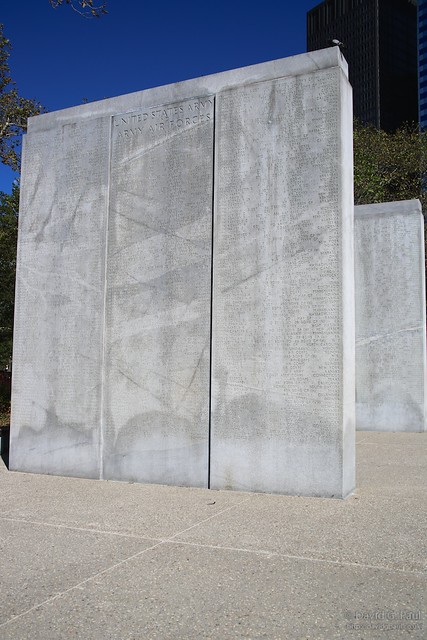 The ferry from Ellis Island then took us back to Battery Park. We didn’t stay there long, but saw a statue of an eagle and stone pillars that form a war memorial. The dates on the memorial only covered the Americans involvement in the Second World War though as they claimed the conflict was from 1941 to 1945, rather than from 1939.

It was fairly easy to find our way from the park up Broadway to Trinity Church. Most of the exterior couldn’t be seen though due to scaffolding but the interior wasn’t too bad. We didn’t spend much time there and walked down Wall Street in the direction of the 9/11 memorial (or 11/9 based on how the rest of the world formats dates). 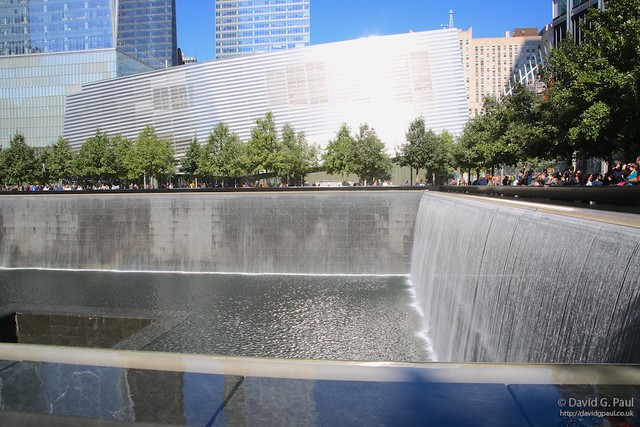 At the site where the world trade centre towers had once stood they had constructed an impressive waterfall in memoriam to those who lost their lives that day. Around the edge is a continuous plaque listing the names of those who died. On the birthday of any individual they put a flower on the name of that person. They also have security patrolling to ensure no one covers the names up, something I found out when I leant across them to rest my camera whilst trying to photograph the waterfall.

It didn’t take long from there for me to navigate us to City Hall Park where we needed to pick up our New York Super Week cards (a card associated with Comic Con to get discounts around the city). However we couldn’t spot the place we needed to be to get them. We eventually wandered around the complete perimeter before we spotted an information kiosk where we could ask about this. As it happened the kiosk was where we originally entered the park and was also the spot to collect the cards.

By this time our legs were aching quite a bit, so as we passed a Dunkin Donuts on the way to Brooklyn Bridge we decided to go in for a rest. We all got a strawberry donut and a drink and sat and talked for a while. 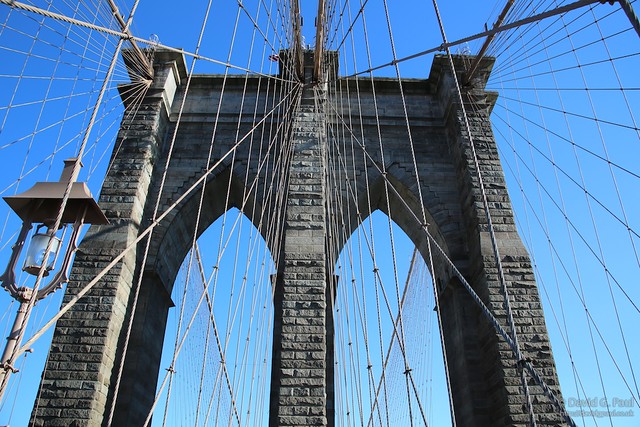 Eventually we moved on and took the walk way up onto Brooklyn Bridge. This path is split in two with one side for pedestrians and the other for cyclists. With how busy the path was it resulted in pedestrians frequently straying on to the cycling side to the annoyance of the cyclists. We walked as far as the first pylon and then started to head back. On the way back a runner ran straight into my sister and just carried on without acknowledging they’d done it. This is the first time in New York I’d seen that stereotypical view that New Yorkers are always in a rush and have no manners (the rest up to this point had been mostly polite). 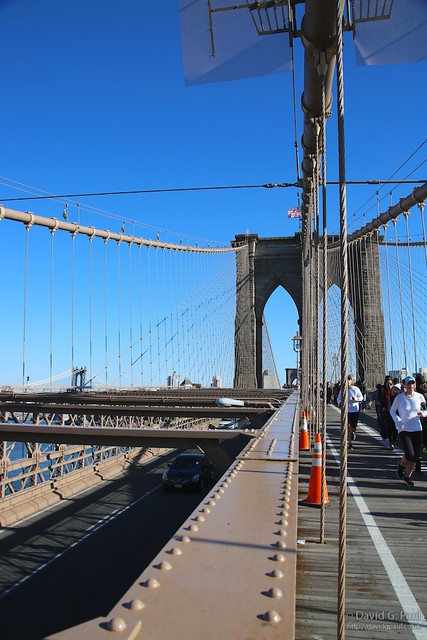 It took a while afterwards for us to find our way to Little China. This was mostly because what was there wasn’t what I had been expecting. We spotted one building that looked fairly Chinese in design, and a sign hung across the road, but that was it. Whilst in Little China we stopped at a souvenir store where I got a t-shirt for $10, and my sister got a hoodie and t-shirt.

I knew that adjacent to Little China was Little Italy, but this took a while to find too, mostly because the map I was using had missed out a few minor roads at the scale I was viewing it at so it took longer to get to the crossroad I was expecting to see. Eventually we found our way to Mulberry Street, though I didn’t know which part of it had been used in the filming of The Godfather. Based on this we decided to head north, and along this road we did spot quite a few Italian places. 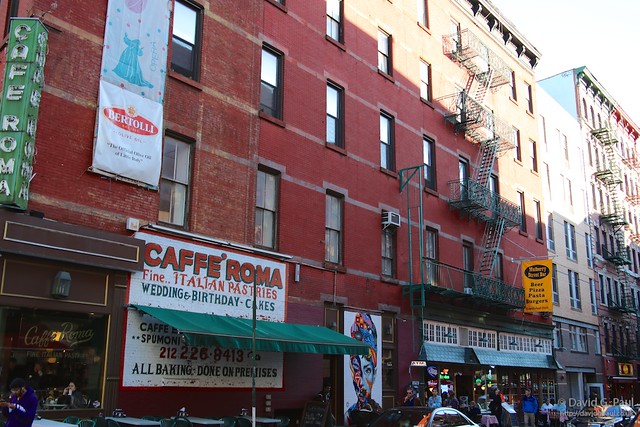 Our final stop of the day was at Cooper Square where there is an interestingly designed building that was used in the filming of the recent reboot of The Tomorrow People TV series. There was a lot of construction going on here, so it was difficult to get a clear photograph. Once done there we found our way to the correct metro station and headed back up to 49th Street. 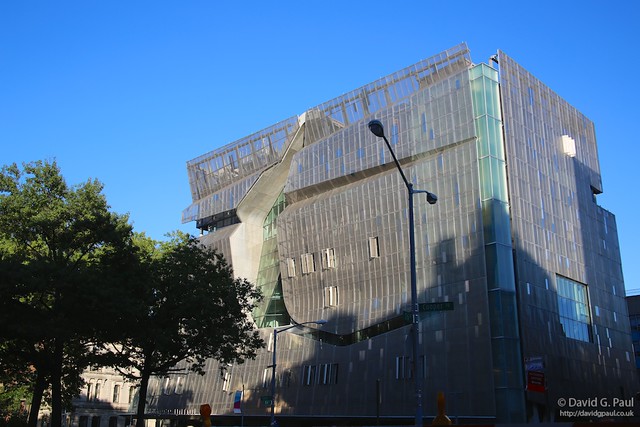 For a while we stayed at Mayfair Hotel, the place my friend was staying at. After a rest we left our bags behind and headed out again to get an evening meal. For this we went around the corner to Applebee’s as we felt like going for a New York style steak. I went for a 12oz New York Strip with fries and Mexican rice, and the whole meal between the three of us came to $111 with the tip – not bad for a good quality meal, especially considering how good the service was there. 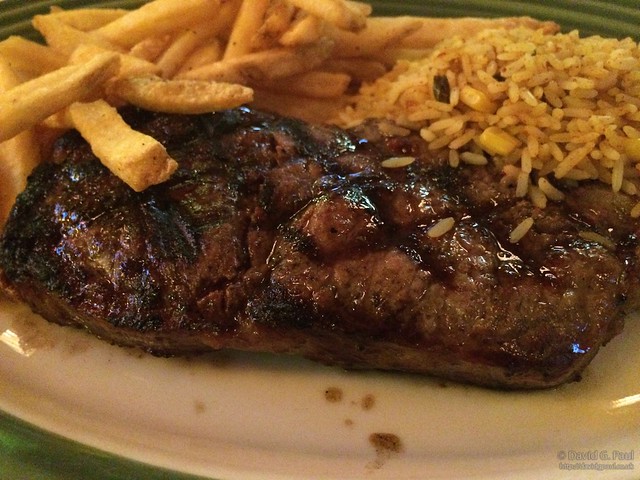 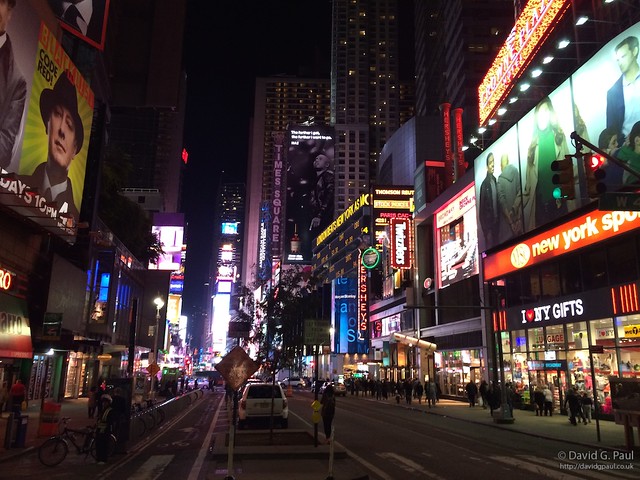 After finishing we walked not far from Times Square on our way back to the Mayfair Hotel,  picked up our bags, and walked the couple of blocks back to our own hotel, finally able to get some rest after 17 hours of being up.