Our last night in a hotel had now passed and our final activity was upon us. The plan was to do the Tongariro Alpine Crossing and to climb Mount Doom. The night before we were told it was likely to be cancelled due to the extreme weather conditions that were predicted. However we went ahead with the climb regardless. It took somewhere around an hour to get from Taupo to the Tongariro National Park. 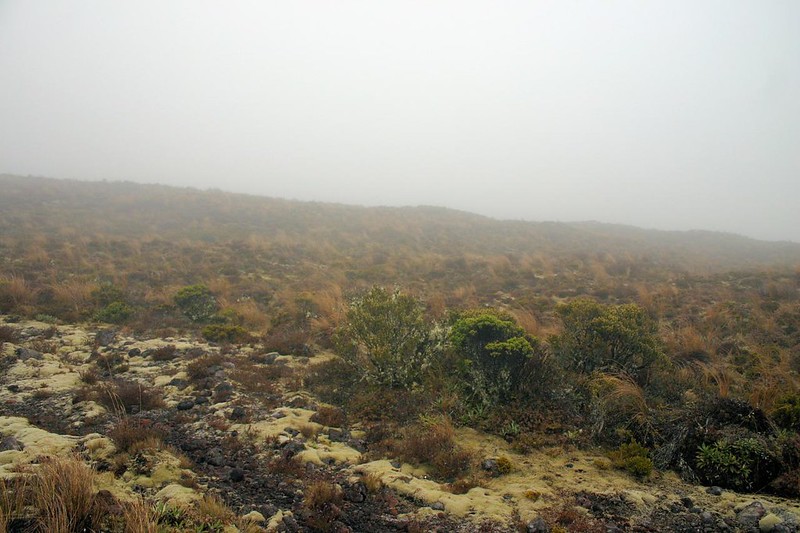 Preparation for this climb basically consisted of making sure we had walking boots, zip-off trousers, a base layer and a fleece. The climb starts by travelling across board walks which raise you up above the volcanic, rocky surface. After about 3km you start to ascend what is known as the devil’s staircase – it’s supposed to be a slow climb up them but we left our guide behind and ascended them quicker than he was used to. Part of the way up we encountered several groups heading down having decided it was too risky for them to continue. Eventually we came across a Channel 3 News guy who spoke to our guide and recommended we turn back before the weather gets worse. He’d been up near the South Crater and couldn’t proceed any further. Still, we pushed on up the Devil’s staircase as it started to rain. 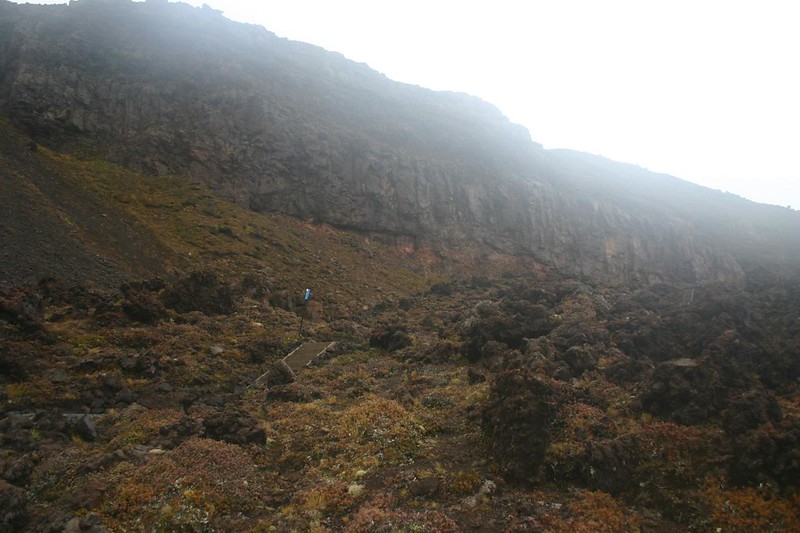 Once we reached the final toilets (which we weren’t told they were) we took this chance to equip ourselves with gaiters, waterproof trousers, waterproof coat, gloves, woolly hat, and backpack cover. We were now prepared to continue our ascent. Eventually we got to the base of Mount Doom but chose to continue on the main track first instead – we thought this was something we could come back to later. Climbing up to the South Crater we started to encounter snow and ice, and by the time we reached the crater the rain had turned into hail. The view wasn’t great from the crater either due to about 5 metres visibility. It was understandable why every other group had turned back at this point, the weather was getting far worse and the wind was starting to pick up speed.

We may have been mad, but we chose to continue on. We walked across a kind of plateau that was actually fairly easy going, it was just the sleet to contend with at this point. It was a bizarre landscape that looked like it would have been better placed on the moon. There was no sign of life, just ash and rock.

Some of the climbs were incredibly hard work and also quite precarious. Our guide was the sort who didn’t mind taking risks and going away from the normal track. At some points the only way across was to stretch out and jump, grabbing on to rocks wherever possible. As the climb got higher there were more and more places like this and we knew if we missed a step we’d slide down the mountainside and wouldn’t likely stop before reaching the bottom. It might not sound too bad but falling down the side of a mountain through ash and rock would likely do more than just ruin your day.

Eventually we climbed down away from the snow and ice to a place called The Emerald Lakes. The rain continued on but the wind had calmed a little which allowed us to sit inside a tent put up with great difficulty with no pegs or poles and kept on place by us sitting on the edges on the inside. This gave us chance for a small reprieve to recover and have something to eat. Outside the green lakes looked amazing, but both them and some vents caused the area to reek of sulphur.

Once we had been fed we continued our ascent to the summit of Mount Tongariro. Every step we took was opposed by the wind and a struggle to keep our footing. It seemed that every dozen or so steps required us to catch the breath the wind was stealing from us. Clambering over rocks we eventually reached the summit to touch the summit rock.

On the way back down our guide said he knew a shortcut; it did however turn out to be a particularly dangerous path and on a couple of occasions I was knee high in volcanic ash and still managed to slide down the mountain only to be stopped by grabbing a rock. On the last occasion, after regaining my footing my friend lost his footing and came sliding down but fortunately him crashing into me stopped him from falling any further. At various points along this shortcut we had to climb higher to allow the guide to get his bearings in this poor visibility environment. To his credit he did eventually get us back to the plateau, but alas it was not clear sailing from there. When we reached the level plateau we encountered winds exceeding 120kmph which made it so much harder to move forward. At times you’d plant your feet firmly on the floor to brace for the wind and would still get blown backwards, creating gouges in the floor where your feet have been forced back. Even when the wind wasn’t blowing us backwards it was either halting any forward movement or slowing us considerably.

It felt like a lifetime crossing those winds but eventually we did get to descend again and the closer we got to the devil’s staircase the calmer the wind and rain. The last 2km of our 19km walk gave us chance to dry off as the cloud cover started to break. 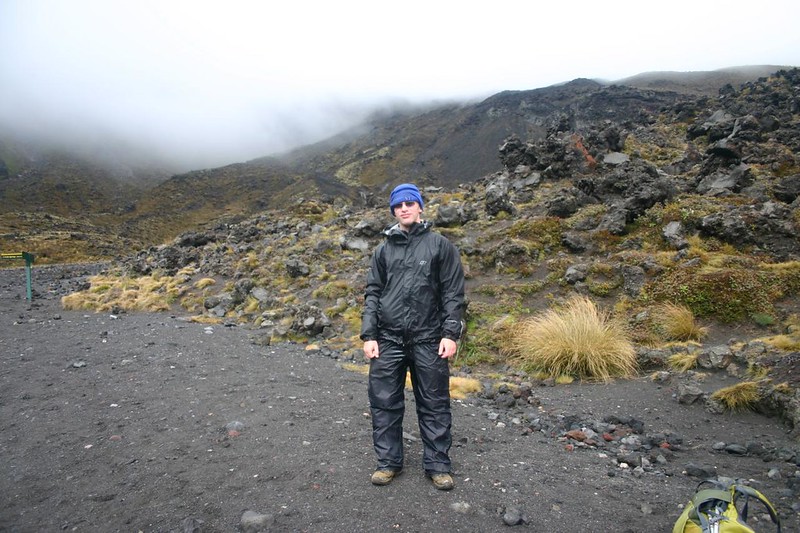 We hadn’t just climbed to the summit, we had survived the climb and lived to tell the tale of a crossing we should never have persuaded the guide to do. Everyone we spoke to had said the conditions were too bad and should have been impossible to climb, but our guide got us there and back again. It feels kind of ironic to know the place doubled as Mordor in Peter Jackson’s Lord of the Rings trilogy just because it was described as having an evil there that does not sleep. 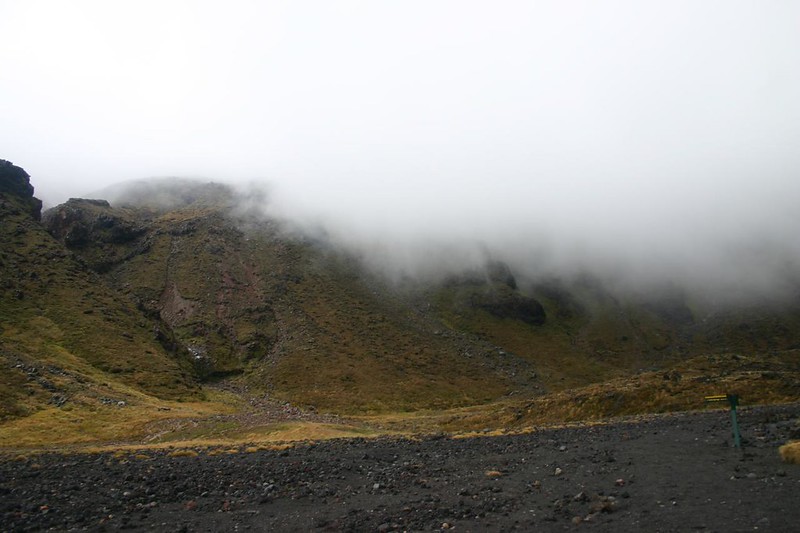 By the time we got back to Taupo we couldn’t really face waiting 8 hours at the bus station for our Intercity bus to Auckland. Instead I suggested we check back into the Colonial Lodge for several hours to give us chance to shower and get our clothes dry.