I last did this race during the pandemic, and the result wasn't a great one for me. The course had changed a little, and the change included some tight turns, so my hope was that in doing it again this year it would be back to the route it was before. Whilst I was pretty sure I wouldn't managed 5:44/mi average like I had in 2019, I did think that if I could manage a sub-6:00/mi average it'd be okay. In fact, as long as I beat last year's time, I'd be happy and from there I could start my journey back towards improving my running again. One of the things I've missed since before the pandemic is challenging myself, and getting faster times and running farther has been part of that. Only recently did I come to see that regaining those times would be a challenge too, and something I could enjoy.

So, for day 725 of the run streak, I drove to Milton Keynes for the annual Rocket 5K. This time I parked up where I had for the 20 mile race earlier in the year as it's free parking. It's just over a mile to the start, but that's okay - that'd be my warm-up! I probably didn't take the most direct route through as part of the route I'd planned ahead of time was blocked due to construction. At the race start they played the usual slew of space-related songs as we all lined up at the start. Due to the size of this race there's two start gantries on either side of the centre reservation of the dual carriageway. To counter for the left-hand one being closer to the turn, the right-hand side starts slightly further up the hill. I chose the right-hand side as it meant I'd be running slightly less hill. I felt pleased with myself for thinking about that!

I stood a good ten metres back from the start line, expecting it to fill up in front of me, but nobody would stand in front. One guy to my left asked what time I was after, I thought quickly, and decided on 18 minutes - he was too, but then a guy behind us was aiming for 17. With sixty seconds to the start I didn't move as everyone else stepped towards the start line so I could start farther back as I'd planned. Once the race started I put more effort into the up-hill bit than I should have, and slowed a little before I reached the top, not wanting to burn out too soon.

Just after the turn it's then mostly down hill as the distance covered is 0.5 miles, with one slight incline from 0.7 miles to 1.2 miles. This second incline felt very tiring, but I tried to keep the pace going as well as I could, even if I did drop down to 6:25/mi briefly. It meant I'd covered the first mile in 5:48 and I knew that I wasn't going to get a PB, but the positive was that I was on target to do better than last year. So far, so good.

At 3km I knew I was tired, but I reminded myself that it's not all that far to go, and I could keep going. I thought of things that were positive, not just as a way of distracting me, but also as a way of motiviating myself to keep going. It seemed to work, but at 4km I was certain I wanted to stop and walk for a bit. I knew I'd be unhappy if I walked though, especially if it meant being slower than last year. Instead I slowed down for a bit, and then started to speed up again once I could see the MK Dons stadium. I was pushing myself harder and harder, but felt I couldn't reach a full on sprint when I hit the final straight through the car park. I was sure if I tried I'd either injure myself or make myself sick, so instead held the pace. 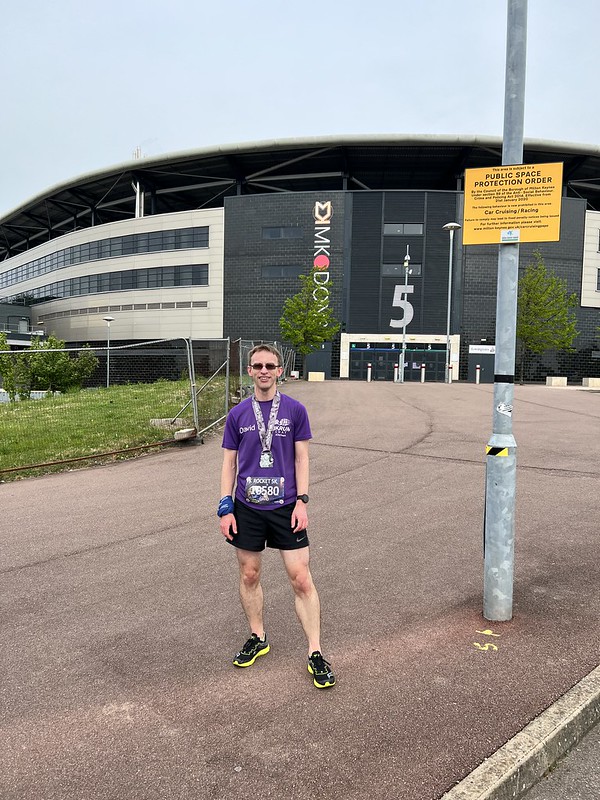 I crossed the finish in 18:21 in position 33 of 852. It was 30 seconds slower than my 2019 time. However, it was 9 seconds faster than my 2021 time, so perhaps things were going to okay. I've found motivation needed to push myself again, and have a lot planned over the next year. I think with careful planning, the races ahead of me will go some way towards helping me get back to where I was. I'm also back to cycling regularly and I once read that strengthens the glutes, which helps with speed. Whether or not it's true, I think it's working. I've noticed over the last month even my pace on slower runs has started to creep up to the point where I'm having to conciously slow myself down again. I think today proves there's a chance for faster races ahead of me, and maybe even some parkrun PBs.