The title is not a typo, this is the race that should have been last year. There were however some global events going on that prevented it from taking place. Today I should have been doing the Big Half, but after it was moved it clashed with a race that was non-deferrable, so I deferred the Big Half for 2022. That race however was postponed until 2022, and so I entered this race in its place. My last 10K was June 2019 when I ran with a cough from Warwick Castle to Kenilworth Castle. This was long before the pandemic so wasn't anything to worry about - it just meant I had to go a little slower. It was one of the few times in recent years I'd not done sub-40, and had been disappointed by it. Now, I find myself on day 473 of a run streak, even slower than I once was, and very out of practice.

My goal for today, other than to enjoy myself and to get to talk to friends I've not been able to in person for a long time, was to see if I could do a sub-40 again. Sure it'd be nice to get a sub-39 once more, but very unlikely when also considering my last time here was 39:20. Sub-40 was unlikely enough as it was.

This is my third race of 2021, and I definitely feel out of practice - I couldn't really decide how much time to leave before the start. I left out at 07:45 for the 09:00 start - it'd give me time to park up in the city centre, and to get a warm-up done. The race start for this one is always inside Abbey Park. Whilst the park does have its own parking, I find it easier to park in the John Lewis car park and use the journey from there as my warm-up.

My warm-up ended near the Race HQ, which this time was next to an amusement ground that had popped up for the summer. Normally this race would be in the spring, and somehow is always a scorcher of a day. Today though was warm, but not oppressively so - it'd rained a lot overnight. As the race had been split in two there wasn't anyone I knew about yet, so went for a walk before making my way to the race start. I stood far enough back to get several rows of people in front of me - but had the issue that nobody did, so I found myself further forward than I wanted, or should have been. We were told that there were around 50 of us that had said we could do sub-45, and the rest would start an hour later. This gap meant that there'd be no lapping people as there has been in previous years, and so in theory would be an easier race.

I started off a little too eager, and was clocking a sub-6:00 pace, faster than I had for a 5K a couple of months ago. As soon as I realised, I reigned in back in, and tried to settle around a 06:20-06:30 pace. I figured as long as I kept in that range I'd be sub-40, and could be happy enough with that. This first mile was a small loop inside the park, and finished just outside. For the start of the 2nd mile it's a very gradual incline up to the main road where you turn left, and then climb some more until you follow a path for a quick descent to behind some tennis courts. This then goes across the car park and back inside the park until there is a right turn that goes onto the canal path. At just over two miles it then crossed the start line for the second time - I wasn't doing too badly at this point. I still felt good, and my pace was around 6:29/mi.

On this second 'lap' it goes a slightly different way through the park so you cross one bridge, go through a narrow gateway and then do a lap of a large grassy area before crossing another bridge. This stretch felt harder, and I thought back to last time I did this race - it'd been so different. I was determined I'd keep on going though. At around 4 miles in it left the park once more, and as soon as I saw the 7km sign I thought I did feel tired, but did not want to walk. I figured if I walked now I'd be disappointed, and it'd be a bad sign for Berlin. I pushed on and overtook a runner in this stretch - one of the few times I did. Once behind the tennis courts and across the car park, this time it cut straight onto the canal path before going into the park, so meant a quick descent of some steps. An elderly pedestrian was on his way up, so me and another runner stepped aside to give him room, but a Stratford AC runner barreled through the gap we'd left. On races in a park we should be respectful of other park users, so my hope is that he just didn't see him until it was too late.

This time when running along the canal I thought of my training runs that led me this way, and how much slower than this they were. I don't know whether I should have found comfort in knowing I was going faster along it now, but I kept telling myself not to slow down. At the end of this section there was just 1km left to go - to get back into the park, cross the start again, and then do some of the smaller inside loop to where there'd be a turning point for the finish. It felt like the longest kilometre ever, but I kept going, determined not to walk this time. Once I hit the grass to the finish I started to speed up to a sprint and crossed the line in 39:19 in position 24th of 607. 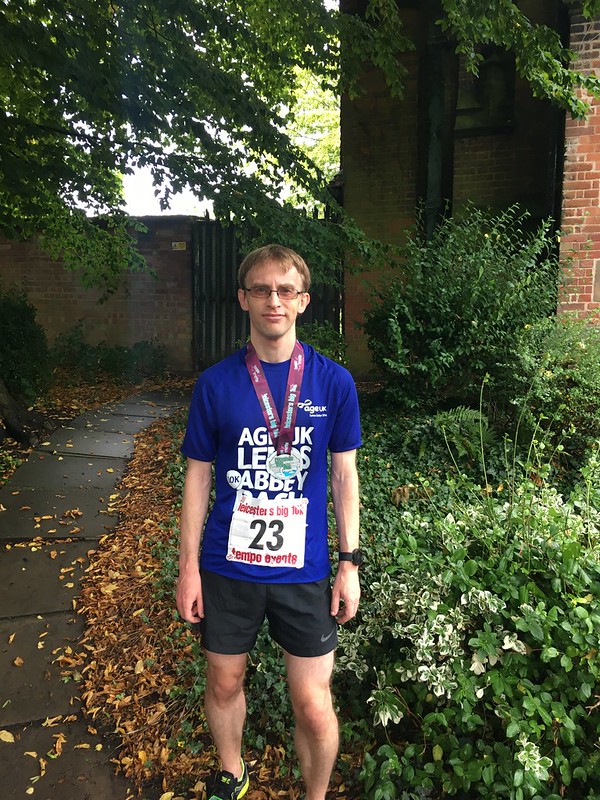 At the end of the race was the best bit, I got to talk to running friends I've not seen for so long. It was great to see @BillAndrews57 with his sister, and then @jen_f16, before walking over to the mass start and seeing @amy_everett_ with her mum and sister. Seeing all these people were the best part of the race, and a real positive. Another positive was that I got the sub-40 I wanted, and was around where I hoped I'd be based on my last 5K race. Not perfect, but it's also my fastest time on this course, having beaten the 39:20 I did here in April 2019 by 1 second (the week before I set my current 5K PB). Maybe things aren't as bad as they seemed, maybe there's still some hope for Berlin being a positive result - I just need to work hard on the day, and try not to give up.