This was another race that had been postponed from 2020. Between lack of training during the pandemic, and racing yesterday, I didn’t feel I’d manage any sort of decent time. It was likely to be another hard race after another early start. Earlier than I thought in fact as I’d made a typo when writing down the times and would need to be going a good 40 minutes earlier than expected. So, reluctantly, it was a 05:00 start. A lay-in compared to yesterday.

It took over an hour tor each Sheffield, and I was fortunate enough to park up right next to the gate for Endcliffe Park, where the event village was located. This one was a little bigger than Milton Keynes yesterday - there were multiple tents everywhere, and funnels fenced off. It looked quite normal, except for the signs saying to wear a mask.

For this race we had to collect timing chips which they called ‘dibbers’. These would actually work like the gardening tool of the same name - you just poke it into the hole. Doing this would register your time, and these devices would be located at major road crossings, and at the start and end of each stage. 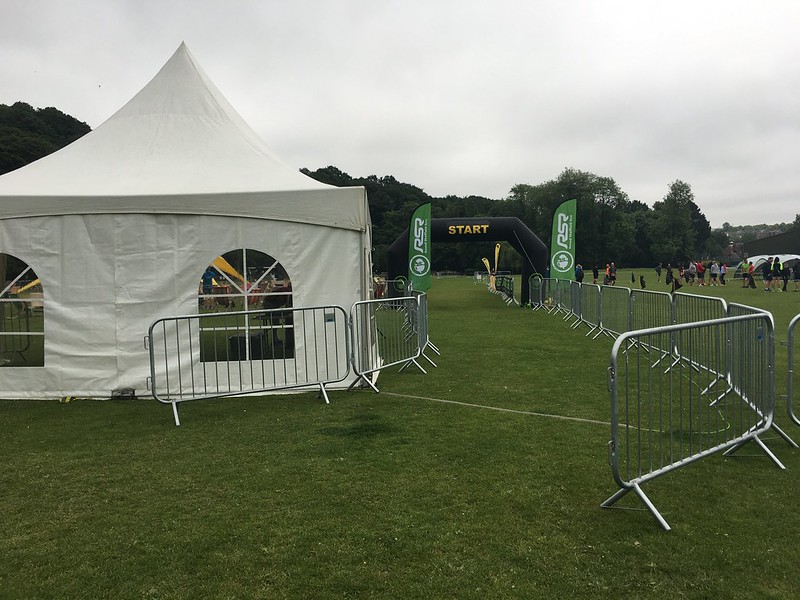 At the race start, I ‘dibbed’-in and set off at a steady pace, unsure what the right pace would be. They were setting us off two at a time, and being in the Elite wave was bad enough, but nobody had stood in front of me either meaning I’d ended up very near to the front of the queue to start. This first stage was a 2.9km dash to Forge Dam with two road crossings. I was fortunate enough to time both so that I would need to dib in and out as I crossed. This was an easy enough stage, and already had a reasonable amount of climbing.

It was a short walk from the end of stage 1 to stage 2. I decided not to use the full recovery time, and got going again as soon as I realised I didn’t have to wait. This was the tough one, I wasn’t sure what to expect but this first bit was flat so figured I may as well start as I normally would and was averaging 07:00/mi for the first bit. This did not last long. The climb started to get steeper and eventually I had to walk. Even though I tried to run parts of it, I’m sure there was more of it I walked than I ran, some bits felt like even walking them was a lot of effort.This section was muddier due to it being along Porter Brook. It was the sort of section where I wondered frequently how much there was left to do - the distances being in kilometres didn’t help when my watch was in miles and wasn’t being started and stopped for stages. The end of this was a bit of a switchback and then there’s the end of stage 2. It was a tough stage, and I was glad this King/Queen Of Mountain stage was over, and could now take it easy walking along Fulwood Lane to recover. This passed an Alpaca Farm, but I totally missed any sign of them.

Stage 3 was the Limb Brook Trail, a 2.5km descent into the valley. This was fast and needed a lot of concentration in places to make sure every footfall wasn’t going to cause an issue, but I made it down the descent without mishap. This sort of descent is usually my best time to overtake people, and this I did. This then ends with a recovery along the main road, and then some more descending to start with.

Stage 4 was the shortest yet, at only 1.8km in Ecclesall woods. The start of this was fast, and I did in fact go too fast. It was during this section where I couldn’t slow down enough for a turn, and ran down an embankment almost into the Limb Brook. I stopped just short of getting my feet wet, turned around, and rejoined the course. From there the descent got quicker and quicker, at some points reaching an easily sub-5:00/mi pace and an almost 10% decline. This one ended at Abbeydale Road, and was a short walk passed the Dore Railway Station, and from Twentywell Lane up some steps that went half way up the hillside. These were steep, and according to the Steel City Strider I was talking to for this recovery section, apparently it used to be part of the stage.

Stage 5 started from what seemed to be halfway up, and was a narrow path for much of this. I was starting to notice the same dozen or so faces on every stage, and I knew all of them were so much faster than me on the hills, but I’d noticed a few of them I could overtake on each of the descents. I wasn’t sure why I was noticing it, it’s not like I was needing to think strategically. This race was one I was doing just to see friends, but so far hadn’t seem them as their start time was over an hour later. In fact, I’d finished this stage by the time they’d started - I’d made it passed Beauchief Golf Course, and through Lady Woods.

The next stage was one of the shortest - just 0.8km through Chancet Woods on an undulating trail, I think this was the one where I didn’t spot the end and had to grab hold of the pole to dib out as I overshot it. It was a short walk from there along a main road, and then off down a side street for the next section through Graves Park. This one was another stage that required a lot more effort I though, and I walked far more than I would have liked. It ended with a feed station. At this one I took some water, and swallowed probably too much of it in one go, and grabbed a chunk of banana. I didn’t want to drink too much as there were no facilities on this route if needed. Although, on the other hand there wasn’t that much of the course left either. A lot of it was blurring together in my mind, and it was becoming difficult to distinguish one from the next, except for those that had certain key features such as the stairs.

The next stage was fairly quick, but I remembered nothing of it. I did however remember the walk from the side of the allotments through the housing estate and onto the main road. Just as with the course itself, during the recovery sections I’d glance around frequently to make sure I could see an arrow somewhere.

At the start of stage 9, we were told that it’d be 800 metres through Meersbrook Park, and was entirely downhill, with a very steep section. Sounded good to me! I set off quickly and found to control my strides on the steepest part I was having to be very flat-footed, every stride ended with my foot fully touching the ground. I could feel the difference, it’s not the most comfortable way to be running, but this was such a fast section and I struggled to control the speed once I got going. At the steepest part, I was running just faster than 03:40/mi pace. It’s a shame I can’t run at that pace all the time, but this was on a 20% gradient.

During the recovery stage I ran across the A61, and then waited by the mirror shop for the start of the penultimate stage. I decided this time I’d use most but not all of the recovery time, and then take a very gentle run up Brincliffe Edge Road. In places, despite the lack of roundabouts, it reminded me of ‘The Park’ section of the Robin Hood Half Marathon. I think it was the type of incline, and all the houses that triggered the memory. This then drops down a couple of old steps onto a trail for the remainder. A lot of this was certainly being walked more than it was being run. I think this had been true for a lot of the hills, but at least this up-hill stage had started with a run. I did however run most of the bit from the top, and through the kissing gate into Chelsea Park.

For the final recovery section I spoke to another runner, and then stopped in Endcliffe Park. This was the final stage - 400 metre sprint to the finish. I couldn’t think at this point what 400 metres looked like, so took it easy to start with, and then when I realised where the finish line was I started to speed up and didn’t quite reach a full on sprint for the finish, but it was fast enough. 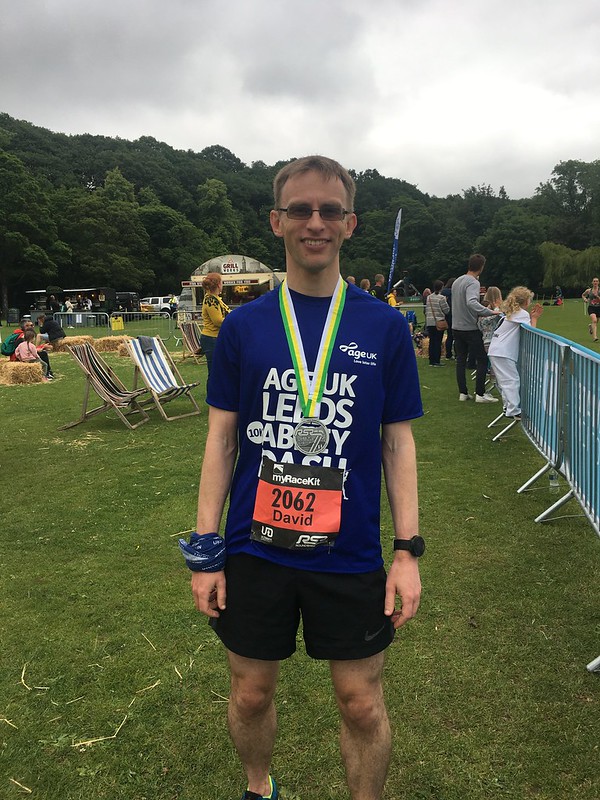 Once I’d collected some water and a medal I used my buff as a face mask once more, and handed in the timing chip and got a printout. They then hand out a banana and a granola bar, and sat on the grass to read the details of the race. I’d finished in 86:09 which didn’t seem that bad really, not considering how slowly I’d taken the ascents with all that walking. I later found this was position 165 of 2,161 finishers. Maybe not that great, but it wasn't like this race was ever for time or position - it was for fun and to see friends I'd not seen in a long time.

I’d seen @rainbowchaser79 at the finish, so after I’d eaten I went back to say ‘hi’. I waited around there for about half an hour, but the friends I’d hoped to see were still some way off. I’d estimated that they’d be another hour, so decided I’d go back to my car and try to cheer them on somewhere on the course. I couldn’t find any parking however, so ended up driving home without seeing the friends I’d entered this race to see.

This feels like a race where I should have so much more to say about it. It's unlike any other race I've done, and it certainly was an experience with some of it being extremely enjoyable. I think it's a race I may have found more fun if I'd not raced yesterday as well, there were times I could definitely feel that effort in my legs still. One of the strangest things was how 'normal' the finish felt. There were crowds of people everywhere, and people doing just normal everyday things such as sitting outside of cafes. It's something I'd not seen since March 2020, and was a welcome sight.