Last time I was in Milton Keynes it was the weekend before everything changed. It was a weekend when a feeling of dread lingered in the air everywhere you went. Talking to runners before the race, we all knew our spring marathons would be cancelled if they hadn’t already been. People had been hoarding toilet rolls over the last week, and during the race I saw people running of with crates of water from the aid stations on the course. It heralded a change in all our lives, and one which only now we’re really starting to see the light at the end of the tunnel of. Today I was back there for the Rocket 5K, delayed from May 2020, and then May 2021.

To comply with COVID-19, it meant starting off in waves, and I’d chosen the 09:00 wave. It was nice and late, so I wouldn’t need to be awake too early. When my race number arrived though, it was for the 07:00 wave. This meant I’d need to be on the road by 05:30, so would need to set an alarm for 04:30. That was not pleasant, and it meant my now routine of video gaming over the internet with old friends on Friday and Saturday nights couldn’t really happen. All of a sudden, not only was I back doing my first race of 2021, and actually travelling more than 5 miles from home, I was letting running disrupt what passed as a social life these days. Things almost felt normal.

When I last did this race it was May 2019, and it was one of my last PB races - there was only one other after this. It's now 2021 and we live in a different world, and my running is different to what it was back then as well. This race day was my 416th consecutive day of running, and I'm slower now than I once was. Since the start of the global pandemic I've been largely without a goal, and nothing specific to train for. Usually I'd do this race a few weeks after having just run a marathon, so would be in a good position to chase PBs at shorter distances. This time, with the possibility of a marathon only just returning, I'm now in a position where I'm doing a run streak and marathon training, and won't be on the freshest of legs. It doesn't help that my speed work has been poor in the last 18 months as well.

So, my expectations for this race have been low. If I wanted to PB, I'd need to be hitting an average pace of better than 5:44/mi. Considering when I've done 1 mile time trials during lockdown I've not hit that pace, it seemed pretty likely there'd be no PBs this time. What it would be though was the return to racing I needed, a way to find motivation again and to start pushing hard once more.

I was awake at 02:00, and for the next couple of hours sleep was not forthcoming. I wouldn't need that 04:30 alarm after all.I gave myself 90 minutes for what should have been a 70 minute drive, and this turned out to be fortunate. Whilst I’d intended that extra time to be used for a short warm-up, a good portion of it was sitting in traffic on the M1 due to a collision between two cars, a lorry, and a car transporter full of Audis. In Milton Keynes I found some free parking near Campbell Park that was deserted - perfect. I left my car behind and did a 0.5 mile warm-up to and through Campbell Park. I stood around waiting and there seemed to be no sign of the race starting. When it got to 07:10 I asked at the tent when the race was starting.

“It already has,” she replied.

“It has?! I didn’t hear or see anyone starting,” I was confused. How was it possible to have missed the start? Then it was explained to me - this wasn’t the race start, that was down the road near Xscape. I got there as quickly as I could, and was lucky that I could still start the race more or less as soon as I got there.

I started slightly too quickly, but dropped back to my target 05:45/mi pace pretty quickly. It was strange to not stand around at the start. After the initial straight there was a left turn that was a little more down hill as it took us down to a roundabout. Ahead was signposted, and I could see a marshal about 200 metres ahead down the road, talking to a driver. I started to follow the roundabout around to the right when someone behind me shouted, “No! Straight on!”.

I was confused, and hesitated and started to turn back towards the cones. It seems they then realised their mistake and apologised. Fortunately it would have been only a second or two lost if that. I got through the first mile in 5:48, which wasn’t too bad. It was representative of the mile runs I’d done during lockdown, but could have done with it being just a few seconds faster, and then holding it there.

That wasn’t to be however. About half a mile down the road, the course joins the redway in a spot where there’s a sign reading ‘Caution: Step’. As I was needing to do a lot of overtaking from having started late, I took it wide and found jumping up the step there was then straight down into a pot hole hidden by the long grass. I stumbled, but kept on running. When the course next turned, it was one of the underpasses under the road that get used a lot in other MK races. From the other side the remainder of the course was then filled with twists and turns that made this feel slower than normal for what is essentially a net downhill race. I didn’t mind the up-hill bits really, they were short and a few quick strides would mean they were out the way. The problem for me was the frequent corners - I just couldn’t take them as quickly as I wanted to. I got through the second mile in 06:00/mi and was not yet feeling tired. In fact, the third mile didn’t feel that difficult either, but I knew if I’d had a fourth mile to do, it would have been a difficult one.

As the MK Dons stadium came into sight, I looked ahead for the finish line, trying to judge when would be best to pick up the pace. I couldn’t see it, then realised that instead of the usual way through the car park, the route went back on itself alongside the stadium. Eventually it did something I didn’t expect at all - it went inside.

As soon as my feet hit the carpet, I slowed down, I think my feet were confused about what was happening. You’re not supposed to run indoors are you? That’s an outdoors thing! Still not sure where the finish line was going to be, I suddenly found myself a second away from crossing it. It could certainly have ended a little quicker, I’d got the energy to, and my legs felt good enough to.

I finished with a time of 18:30 in position 21 out of 628. It wasn’t exactly the time I’d have normally wanted, but considering the last 18 months, how bad my training has been without a race to aim for, and the run streak. I don’t think it was as bad as it could have been.

At the finish I collected the finishers medal, some water, and a pain au chocolat and headed outside. There I bumped into @lloydcrossruns and ran back to Campbell Park. For the first time in so long, I could not only talk to someone face to face, but talk to someone about running. 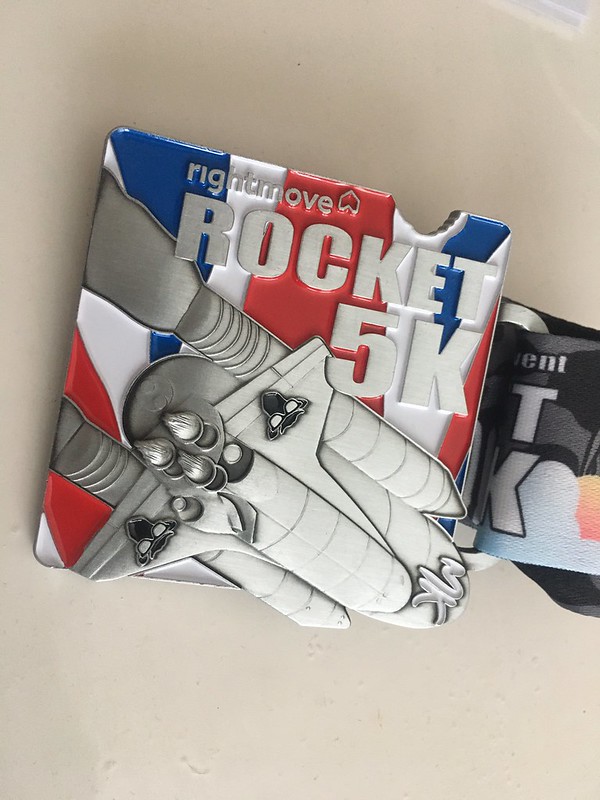 Tomorrow, for my 417th day of the run streak I'll be doing something a little different. It's the Round Sheffield Run which is a multi-stage trail event.