A friend I'd not seen since last year's Manchester Marathon, had planned to do this race, so I entered this one. It wasn't too badly timed to use as a long training run for the Manchester Marathon just so long as I did a mile warm-up and a mile cool-down aftewards. Sadly my friend never got to do this race due to ridiculous cut-off times; but I decided I'd go ahead with it. It'd be all about controlling my pace and ensuring I did no mile any faster than 07:00/mi or I'd risk overdoing it. So in the build-up to this race I did a 22 mile run on the Sunday, and then 5 miles a day up until this race with the exception of Saturday - my rest day, and a tempo 5.5 mile run on Thursday. My legs would be tired; but it'd help reign in the speed a little.

However, to quote Robert Burns: the best laid schemes o' mice an' men gang aft a-gley. This meaning that on Friday, after having done my last pre-race run, things were about to change. Since January the news has been talking about a virus, COVID-19, which started in China and was almost certainly giong to break the border and spread like they always seem to. Back then I thought about SARS, and other deadly viruses we've seen spread across the world and figured it'd probably affect air travel at some point. I never expected it to actually affect events in the UK as well. When I did the Big Half there was already talk that cancellations were likely to happen to try and slow the spread; but still I held out hope. Then local government began talking about contingency planning, and that spread into my work too - and suddenly things seemed like this planning may become more than just planning for the worst. It seemed we might just see mass cancellations and possibly even restricted movements unlike anything I've seen in the UK in my lifetime. First Jordan Marathon was cancelled, which came as a surprise as I thought of all my races that was far enough in the future to be safe. Then Manchester Marathon was cancelled.

I was surprisingly unbothered by it. In some ways it felt like an opportunity to be better prepared for Guernsey Ultra in May, so I decided that as MK Festival of Running could be my last race for some time it would be good to make the most of it. It'd be a race to enjoy; but maybe also one which I could now risk pushing a little harder in.

I got to Milton Keynes and found somewhere to park for free about half a mile from the start - perfect for a warm-up jog. The race village seemed deserted, with most of the people about queueing up for on-the-day race entries. I'd never seen so many sign-ups for a race before - I guessed they were doing other 20 mile or 13 mile races originally that had been cancelled. Even the portable loos here had signs on them reading:

Please do not take the loo rolls or hand sanitiser

A reminder of how ridiculous things had gotten. When I walked to to the start for the 20 mile race I got talking to other runners, and some were heartbroken over London Marathon being cancelled; but were finding some solace in getting to do one last race before deciding what to do next. The spirit of some runners is unbreakable.

I started a little behind the 2h15 pacer, and set off following him. I figured I'd stick with him for as long as I could as the sign on his back said in brackets 'sub-3:00 marathon'. Perhaps today would be a good way of seeing how ready (or not) I am for such a goal. What I didn't think about though is that whilst a sub-3:00 marathon is a 6:52/mi or faster, a 2h15 pacer would be doing 6:45/mi - a little quicker than I needed, and probably a little quicker than I'm ready for. Despite this, mostly from not realising, I covered my watch with my sleeve and trusted in the pacers work.

We reached Woughton-on-the-Green, a village off the main road, and was feeling good; though I'd got a nagging feeling I was going too fast. I decided that it must be because I've done so many long runs at a pace slower than target I'm probably just not used to it on a Sunday. I continued on into Ouzel Valley Park and another mile had ticked by, and then another two before reaching Willen Park Lake. Before reaching the lake however it felt like the pacer was speeding up, so I held back and maintained pace. When I checked my watch I saw I'd been averaging 6:34/mi - which was far too fast for me. I was sure the pacer must have been going to quickly, so I took comfort in that and slowed down to just above target pace. By the time I'd reached mile 6 I was around the lake and the pacer was so far in ahead of me he could no longer be seen. Though I'd fallen into runnign with a pack of three other runners that included who was at the time the first lady.

I saw two of the delivery robots that have been deployed in Milton Keynes during this race. The first one was cool to see, the second not so much. It seems that runners, or at least a mass of runners may be too much for the programming of these robots as the second one turned into me at the last second causing me to need to jump out of the way. Fortunately there was nobody to my left otherwise I'd have gone straight into them!

At only 30% of the race covered things can change at any time. Sometime in the next three miles the first lady had dropped back, and the other two runners had stopped talking to each other and were now slightly ahead of me and running apart. I was however surprised to have caught up with the 2h15 pacer despite no real change in pace from myself after having slowed down. I was now certain his pacing was all over the place. I was still following him when moving onto the second lap through Woolstone. On this second pass of Willen Lake I noticed the wind had picked up and it was becoming a struggle to push forward; but I kept on going and stuck with the pacer. Then it started to rain.

At first the rain wasn't too bad at all, almost refreshing; but it became relentless and gradually got heavier. Just as I was about to reach 13 miles the weather finally got the better of me and I slowed to a walk - that was the last time I'd see the pacer as my race was about to go downhill. After wiping my glasses I got going again at a slower pace. I have a bad habit of not fuelling when it's raining, and today was no exception. By the time I'd rounded Northfield I found myself needing to walk again. I started to walk more and more regularly as the miles ticked by, wiping my glasses when I could. The drop in temperature wasn't helping my glasses either as now having wiped them meant they were steaming up too. In Broughton Brook Linear Park, this had the unintended side affect of me not seeing a puddle at a point I could barely see and ran straight through it. I'd still got 5.5 miles to go with feet that were now squelching with every stride (or rather, plod).

I avoid puddles in long runs when I can help it, as wet feet always seem to lead to blisters. At 16 miles it was a relief to know that I'd soon be doing a section for the third time; but that it would lead to a turn off for the 2 mile run to the finish; however my feet were also becoming uncomfortable. I ran when I could; but I'd had enough - so much for making the most of this 'last' race. This turn off is at the Tree Cathedral near Willen Lake, and at that point my walking had allowed my body temperature to drop too. My hands were freezing, and I just needed that finish. It wasn't enough motivation to get a quick finish though - I could still barely see, and was also incapable of running up the hill in Campbell Park. I walked it. However I did run the final 500 metres to the finish, and once I'd got the medal and bottle of water I just kept moving, not stopping once, until I'd got from the finish line to my car. I was sodden, and hadn't thought to bring anything to keep my car seat dry. The only saving grace were the heated seats for what was then an hour drive home. 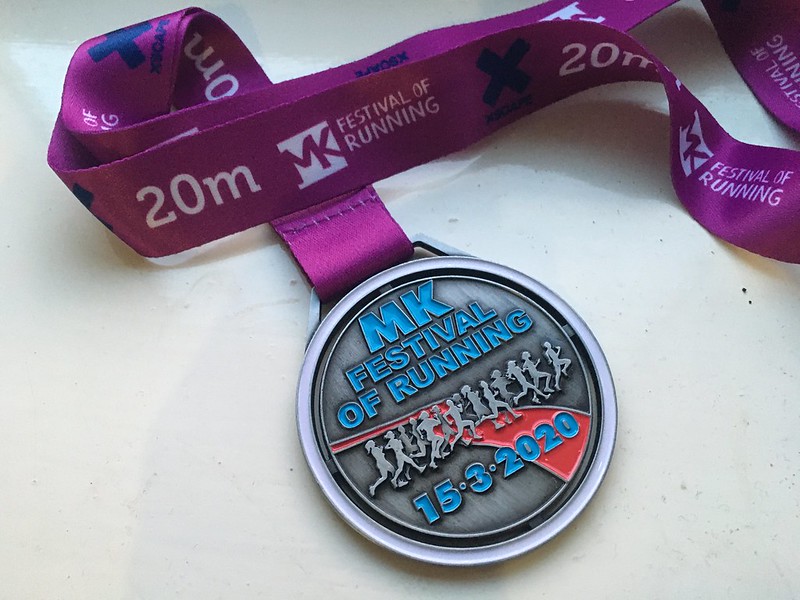 I finished this race with a time of 2:20:31 in position 55 of 580 - only just in the first 10% so one of my worst results in a while. What this race tells me though is that with an average pace like this I'm not quite ready for a sub-3:00 marathon; but could potentially be ready for a 3:05 one. I'll keep on training now for Guernsey Ultra 36 under the assumption that will be my next big race. Maybe I'll do a marathon in training before then. With hills. And stairs.