After years of working hard at the half marathon distance I had finally managed to get a time I could be pleased with. I'd achieved a sub-85 minute, and with it had opened up the possibility of a "Good For Age" entry into the Big Half. This was incredibly exciting; but I'd already done a 'normal' entry into this race. Fortunately a quick email to them was able to sort it:

The difference is where you would start - the Good for Age runners will go off just before the general waves.

Once the Good for Age entries open (I have been told recently this is around September), if you are successful in gaining an entry via GFA, we can withdraw and refund your general entry at that time.

Excellent! So when the time came for the GFA entry I applied, and was accepted. I then replied to the original email on October 17th to find out what I should do now to cancel my normal entry, so I could then pay for the GFA entry instead. After a whole week had passed I decided that they may not monitor old emails, so sent a new one which was replied to the following day. This time however I was told a different story:

As for the Good for Age query, there is no need to enter the event again as GfA. The entry you have will mean you start in the same pen as the GfA runners as they are starting with the masses there is no seprate start area. This is only the case for Championship runners.

I was surprised, as what is the point on GFA if there is no difference to a normal entry? I double checked to be sure, and sure enough was told "keep your entry in the event and not enter the Good for Age also as there is no need to". So that was it then: my first ever GFA entry was cancelled, and I'd be using my original entry. In November, the same person then replied to my original email thinking it was a new query, and they just seemed a little bit confused. I was starting to think that maybe their organisational skills may not be the best; but hopefully it'd be okay on race day! That's what really matters.

As with my PB race last year, I travelled down to London the day before and checked into a hotel not too far from the start. I wanted it to be around a mile away as that would be perfect for a warm-up jog in the morning. I really wanted a relaxing journey so took the train instead of driving. Finding somewhere safe to park overnight is one less worry.

One of my concerns for race day was that we'd encounter the same storms that had been around for this race in 2019. The strong storms and snow showers in the weeks leading up to it didn't help me think about it any less. Whatever the conditions brought, I would deal with them on the day - I know what obsessing over the weather can do to people. I think most, if not all, runners have been guilty of it at some point: refreshing the weather app in hope for something better. This left my mind though once I caught a cold, and spent the last week before the race underprepared, and desperately hoping the cold would go. This was never to be an actual PB attempt; more an attempt at repeating last years results to know it wasn't a fluke. I realised though that I wouldn't be 100% on the day; but would still try my best. Perhaps if I started off at my target pace I could see how long it'd last for.

In the evening I wanted some pasta; even though I knew London would be filled with runners wanting the same, I hadn't bothered booking a table anywhere; but had made plans to meet up with some friends. We got lucky and was able to get some pasta from the Vapiano near Tower Bridge. Perfect! 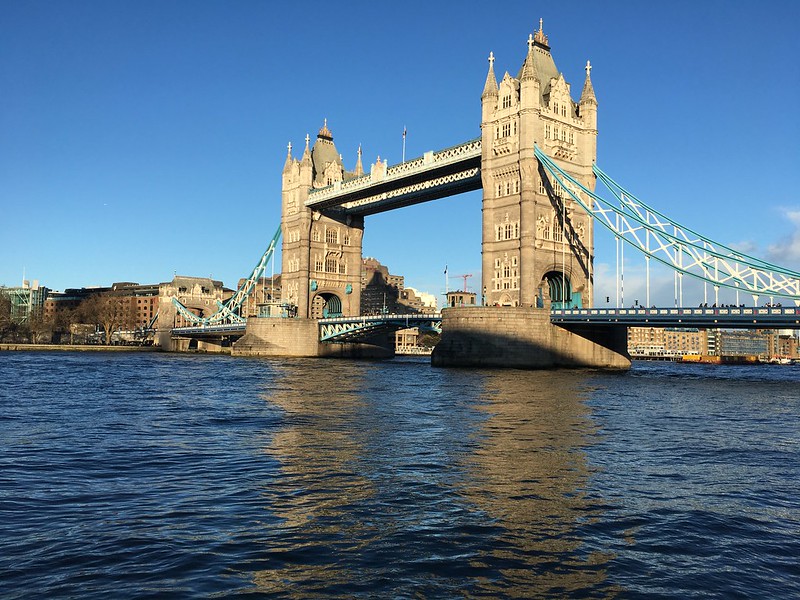 Saint David's day. The day of the Big Half. I'd decided that if I could push myself to sub-85 then I'd treat myself to a miniature I've been wanting to paint (not that I need more). Maybe it wasn't the same motivation I'd had to run fast as last time; but maybe it'd be enough. The hotel was a nice one, and quite quiet; yet I still woke up at midnight, and then again at 04:00. On that occassion I didn't go back sleep, so really took my time getting ready for the race and deliberating over what to wear. It was predicted to hail between 08:00 and 09:00 - just when I'd be hanging around in the pens; yet the Met Office disagreed with it, so trusted them. It was however going to be very cold.

I jogged from the hotel to the baggage vans on the south side of Tower Bridge, and dropped off my hoodie so I'd have something warm for after (I know it's a long walk to the DLR!). It was chilly waiting in the pens, and I was wishing I'd got got long sleeves. Sometimes you just have to trust you've made the right decision.

The sun was shining when the race started, and it didn't take too long at all to find some space to run in; I'd say only the first 0.1 or maybe 0.2 miles were crowded - much easier than I expected for a big city race. This first mile went to plan and was done in 6:25/mi; okay still early days; but it's good to start as you mean to go on. I then tried to keep to that pace by feel as I entered the Limehouse Link tunnel. I was surprised at how long that tunnel is! There's a long ramp down into it, and then it seems to go on forever. It doesn't; but it does seem to be either a mile or slightly more before running up the steep ramp the other side. The chance for your watch to get a GPS signal back is however brief as by the time the route reaches 5K you're amongst the tall buildings of the Isle of Dogs. The GPS gets REALLY messed up there.

Not knowing quite what pace you're going does make it difficult to know whether you should push harder, or stick at the pace you're going, or even slow down. You have to trust in your ability to run to feel. I know I didn't run mile 4 in 5:48; but my watch does however believe I did. What I found worked instead was to go by the times on the mile markers instead - though I didn't think until later that the time on my watch would have been better. I'm an idiot. I then lost track of what I was doing and just ran.

Around mile 5 the route goes passed where we'd already run so was able to watch the runners going in the opposite direction - keeping an eye out for anyone I knew. It's a nice distraction; but we leave this through Wapping High Street and then run alongside where the pens had been earlier. Tower Bridge was in sight - that was good motivation to keep pushing. So far it seemed I was on target, or maybe slightly ahead. I wasn't entirely sure; but I'd got through the first 10K in 40:14. I was finding it hard work; but Tower Bridge gave me a second wind. I was enjoying the course! Though maybe not so much the cobbled streets - I was glad to be passed those.

On the other side of the bridge I spotted the place I'd been spectating from in 2019, and started to be distracted - thinking of where I'd gone from there and what the rest of the day had been like. Before I knew it I'd done over 8 miles and had passed Southwark Park. I was trying to remember what I'd seen of the course the year before; but couldn't quite remember the order I'd seen things in. I knew there was at least one more hill to go over before the finish. It was however getting harder and harder to maintain pace; but I got to 15K in 1:00:21 and felt that was about right - 6K more to do in about 24 minutes. I'd got a feeling at this point I wasn't going to make it to sub-85; though I also wasn't too sure if my maths were particularly good this far into a hard race. I'd been enjoying it; but now it was getting really tough.

Shortly after the mile 10 marker it all started to go wrong. I decided I needed to walk a little, and a few hundred metres later decided I needed to walk some more. I knew at this point I'd messed up. I was then trying to keep walking breaks as short as possible; but they were still there, and I was losing time. Walking may have made the 11th mile my slowest; but not wanting to quite give up did push me on a little for two ever so slightly quicker miles so I'd got to 20K in 1:21:53. It didn't seem impossible to still get a sub-85; but I think my head knew it was over. I wanted to walk with just 200 metres to go; but convinced myself to keep on going. I couldn't be bothered to sprint to the finish like I have done for so many races before, no matter how tough they'd been.

I crossed the finish line in 1:26:14 in position 899 out of what I think were 10,000 finishers. I had however failed. Would eliminatating the walking have gotten me those 75 seconds I'd needed? I don't know - I think if those last 3 miles had been 6:30 each I'd have still fallen short by a few seconds. I don't think the weather or the remnants of the cold affected me, I think I just wasn't ready. 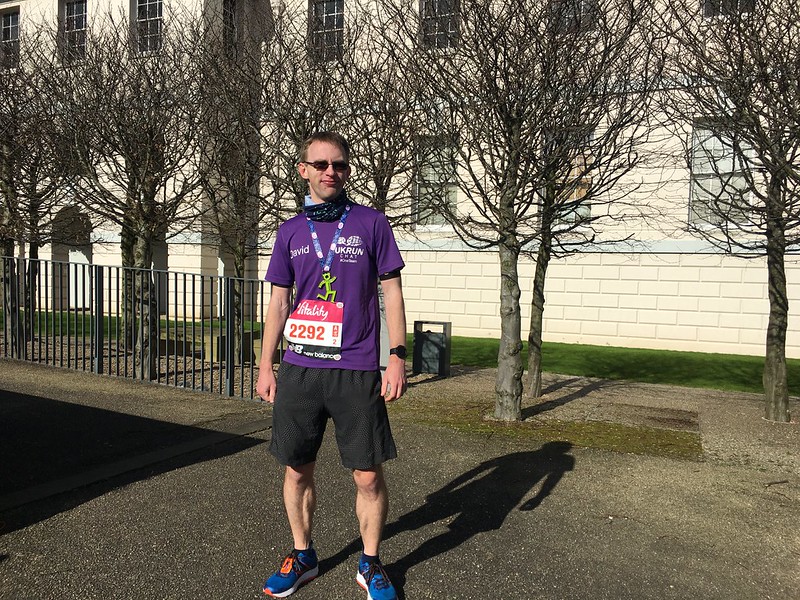 From the finish line you're handed water bottles and then eventually a medal. You then walk from there across the road to the Maritime Museum, and can collect a free techinical tee if you feel you don'ty have enough. They then have a narrow entrance to where the baggage lorries are located - but the lowest numbers for each wave are the closest - so those finishing first were creating a barrier that later finishers couldn't get passed which caused a bit of a queue. From the moment I reached the barrier in front of the lorries, it was then a further 20 minutes before I managed to get my bag. It was a bit of a free for all of shouting numbers whilst they were still trying to get organised. After this there's then a few snacks you can have: an apple, a packet of salt & vinegar lentil crisps, and a banana.

I'd planned to join a group for pizza afterwards; but it took me far too long to get back to the hotel to get my bag. From Greenwich Park I took the DLR; but got off at West ferry and went for a cool-down run. Sadly I didn't have too much luck with the train home either - standing room only for the entire journey from London to Leicester.

Next up is a 20 mile race I'm using for training in Milton Keynes - in just two weeks time. Then it's the big one: Manchester Marathon. Hopefully that one will go to plan…