Before turning 30 I wrote myself a bucket list of things to try at some point. Unbeknownst to anyone one of the items on this list was to skydive, so it came as a big surprise when I was given a voucher to do one for my birthday this year. My first thought was one of shock and wondering how I was going to fit it in to my plans for the next few months. I figured it'd be best doing it in the summer whilst it'll be warmer at altitude and has a better chance of being good weather.

Calling the skydiving centre in Nottinghamshire, they let me chose almost any date in July - including Saturdays. Perfect! What was not so perfect though was that in the confirmation email they sent there were some details indicating a medical certificate is required to confirm that you're healthy enough to jump. Fortunately I later found out it's okay for this to be self-signed if you're healthy. So all was good.

The way this worked was that although my booking was for 08:00, it could happen at any time between then and 20:00 depending on the weather conditions. During the week leading up to the event, the weather was not looking good. Despite this I set off at 06:45 so I'd be at the airfield in time. The forecast indicated there'd be a break in the rain for several hours, so maybe if the wind wasn't too bad it'd go ahead.

The small village of Langar was pretty easy to find, and the old RAF Langar airfield is just outside that. It was early, but there were a few cars around and some people had camped on the field. Inside more and more people gradually turned up in the reception, and when asked who wanted to be first... well, I volunteered. I handed over my voucher, medical disclaimer, signed a few pieces of paperwork, paid £25 for a BPA temporary license, and £80 to have some photographs and video taken during the tandem skydive.

Once everyone was checked-in we were called back into the reception for a briefing. It seemed we were very lucky to be going up: it was forecast to get windier, and at that very moment it was on the maximum legal limit for skydiving. One of the instructors commented that it might turn out to be the only time they'd be diving today. Very lucky indeed.

We were shown and practiced positions for when you first jump out of the aircraft, during free-fall, and for landing. Still feeling a little tired from the early start I was sure to keep repeating them in my head to make sure I wouldn't get it wrong. When leaving the aircraft I'd need to look up at the ceiling, and arch my back whilst crossing my arms. Once the instructor tapped me I'd then know it's time to change arm position. For the landing you put your arms underneath your knees as if you were sitting down, lift your legs as high as you can, and point your toes towards you. This is so that when landing you'll slide along sitting down, and it'll be your heels that touch the ground.

If you get your landing wrong then you could easily be putting the full weight onto your ankles - it'd be enough to seriously damage them. With training for Amsterdam Marathon in full swing - that is not what I wanted. I had to be extra cautious - I'd seen the stats for how many injuries and serious injuries there are per year. Although a very very small percentage, it'd be just typical if one of them was me. They do a lot to reassure people about doing the dive I think; though oddly I was calm and didn't feel nervous. I think maybe some of my previous experiences had helped with this, and knowing how many safety precautions there are.

Once we'd signed our names to show we'd attended the briefing, we put on some overalls, and then the harness that we'd each be attached to an instructor with. During the briefing they'd commented about it feeling loose; but to be honest I actually thought it was very tight! At least I knew I'd be securely fastened to the harness, and the harness in turn to the instructor using four hooks which each on their own could be used to tow a car.

The safety hat I'd need to wear was then attached to the harness ready for me to put on later - inside this was some goggles that would protect my eyes for the descent. My plan was to wear my glasses underneath these anyway.

For the skydive I'd be attached to Nick, and we'd be the first off the Cessna Grand Caravan so we stood and watched as the others got on pair by pair. Inside there were two benches that seated nine of us, and then two of the three skydiver videographers sat on the floor in front.

Once all aboard the roll-down door was put into place, and we began to taxi to the end of the runway. The aircraft turned, and turned the engines onto full as it roared along the runway. Within seconds we were up in the air - no turning back now even if I'd wanted to. It's been a while since I've been on a light aircraft and I'd forgotten how noisy they were - I couldn't hear a word of what was being said as we waited to reach altitude. Instead I watched as the world passed by beneath us.

In films about the second world war, I remember seeing how they'd queue up at the door waiting for a light to change colour so they could jump. Here, the process was fairly similar. When the red light came on, I put the goggles on and we edged closer to the door. I arched my back as my feet dropped out of the door, I looked up, and crossed my arms. 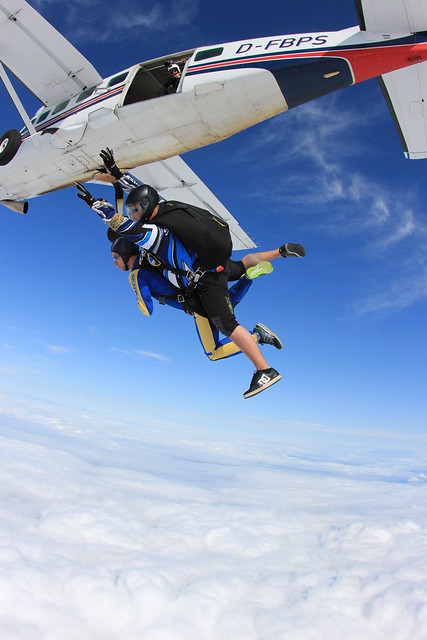 My first thought was how strange it felt. I looked at the cameraman, and then we were out of the plane: hurtling through the sky in free-fall as our speed increased to what would have been around 120 mph - the average terminal velocity for a skydiver. We were moving faster than I've ever driven - it's a speed that's not easy to comprehend. In some ways it doesn't feel like we were moving that fast! Just imagine running a marathon at that pace, it's mind-blowing. 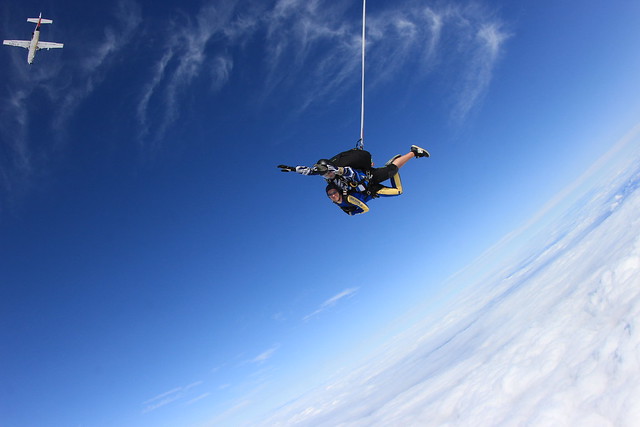 We spun around in the air, and already I knew this was going to be so different to the paragliding I'd done in Nepal. Everything was moving so quickly, breathtaking, and then I thought I felt a tap on my arm. I wasn't sure if I'd imagined it as it felt like we'd only just jumped; but I started to move my arms into the next position then hesitated. Had I imagined the tap whilst I was looking around? Then I felt another tap, and knew for certain it was now time to move into the second position. 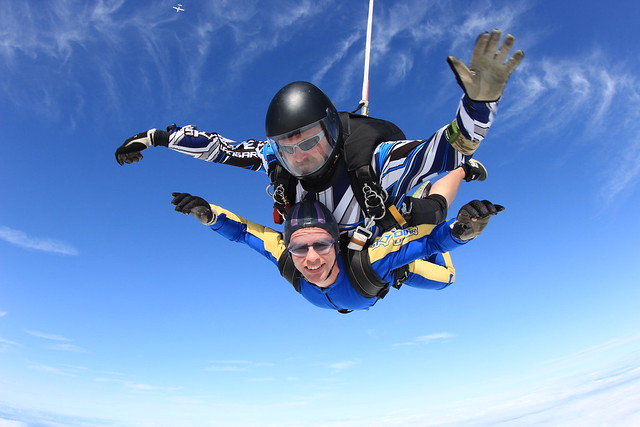 I could feel the wind rushing passed me like nothing I'd ever felt before. Whenever I tried to open my mouth I could feel just how strong the wind was at that speed. I could see the clouds below us edging closer and closer, and I was wondering what it'd be like to pass through them. I realised I was supposed to be looking at the camera; but there was just so much to take in - I didn't care how that looked. I looked up to see if I could spot where the other skydivers were, and thought I'd caught sight of one of them.

As we were about to reach the clouds, it looked like we were waving goodbye to the cameraman that had been with us, and then as we became surrounded by the dirty grey cloud I felt a tug behind me as I moved into a standing position: the parachute was open and our descent was now slowing. 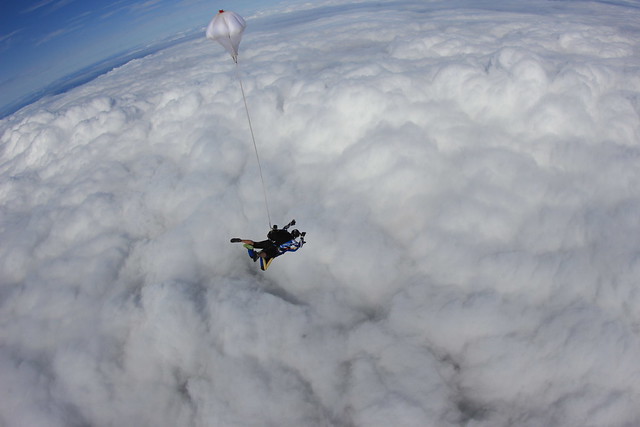 Once through the clouds I realised that my ears were hurting - just like on a scuba dive. Instead of clearing my ears without thinking about it like I would in that situation, I mentioned it and Nick reminded me of what to do. Of course! Swallow, or yawn - I know that works!

Now under the control of the parachute, Nick was controlling where we were going so we'd head towards the dropzone. This time when looking up I could definitely see the other skydivers not too far above us. I carried on looking around at what else I could see, and just relaxed. I knew it would all be over soon, so I tried to take in as much as I could.

We practiced the landing whilst there was still some distance to go - it seemed easy enough. Then as I saw we got closer to ground and was heading towards a marked circle I lifted my feet up, and prepared for landing. Just as we were about to touch down, Nick said to stand; but I hadn't quite been prepared for that and carried on sitting as we landed.

It was a smooth landing, and if I'm honest it was even smoother than the time I paraglided. I don't think making contact with the ground could have been any gentler… especially when you think we were basically falling through the air from something like 4,000 metres! 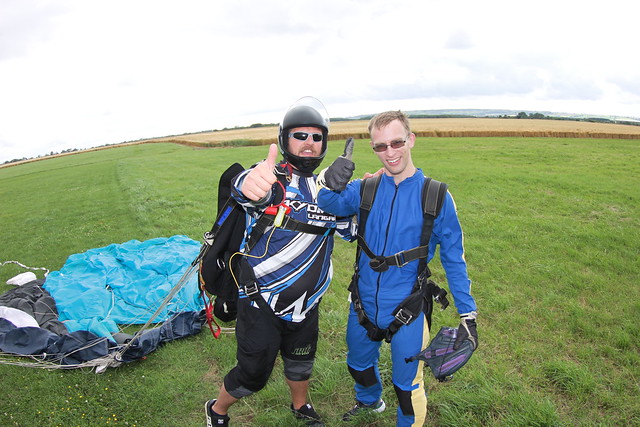 It's difficult to describe the experience, I was in awe of it; but I have to say it was incredible. A massive thank you to my friend for arranging this, and to Nick and Skydive Langar team for the experience! I'll soon have the photographs to remind me of the day; but until then I've got a certificate to remind me that I completed a tandem skydive.