I awoke in London after having travelled down by train the night before. I’d been fortunate enough to be able to work from home which meant getting to the train station on time had been easy, and at the other end all I needed to do was find the hotel, and sleep. It was even a journey in comfort as unlike the usual £80 economy ticket to London, it only cost me £25 for first class - complete with complimentary tea and biscuits.

With just days to go before the Chicago Marathon I needed to get in one last five mile run at a steady pace. I had hoped to run this with a running friend who lives in the area; though unfortunately they’d suffered an injury a couple of weeks before and was now recovering. I ran by myself, figuring out a route as I went - it felt entertaining to a degree that I was running again in the city of my first major race, and would soon be travelling to the second city. Chicago just happened to historically be referred to as the second city as well due to its populous.

My route was primarily around the perimeter of Regents Park - a route that my friend often runs themself. I’d run this way once in training when I’d been in London to visit the Jewish museum, but that had been a tough run in humid heat. Today it was pleasant, and I went a little faster than I’d intended.

Breakfast at the hotel was unfortunately continental, and not the last English breakfast I’d hoped to have. It was also incredibly warm in their basement breakfast room, so I tried to be as quick as I could though this left me with a few hours in the room before I needed to be on my way to the airport. Getting there from Kings Cross is easy - jump on the underground and take the Piccadilly line for about an hour. Bag drop-off and security were so quick that I found myself waiting for quite some time before it was time for boarding.

It was a smaller aircraft than I’m used to for a long haul flight. It was cramped, made more so by the passenger next to me who was wide enough to prevent the arm rest between us going down. The food wasn’t that great either - but they did at least serve ice cream. In terms of entertainment during the flight - there were a number of channels that were on a continuous loop. The only one I particularly wanted to see had faulty audio so I sat and read a book instead. 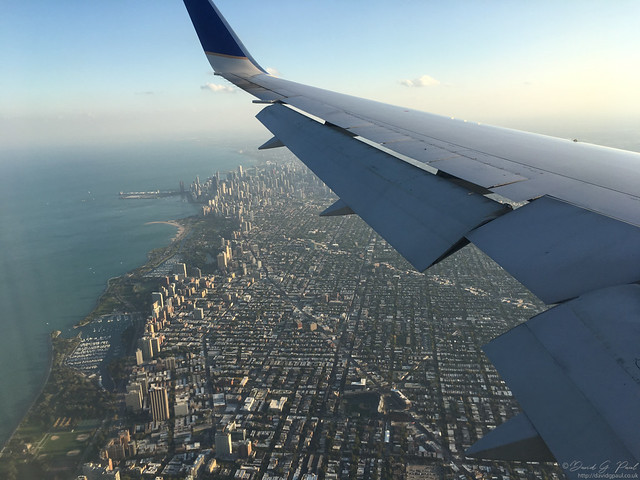 The flight into Chicago is from across one of the great lakes so that you can see downtown from the left-hand side of the plane during the approach. After a short taxi we were at the terminal, and surprisingly I found it extremely quick to get through. I walked fast enough to get ahead of most people off the plane, and then the immigration was done through a machine that printed a sheet of paper that would then be handed to an official. This took just minutes to complete, so I was in baggage collection (and with my luggage) within about fifteen minutes of disembarking.

What took the longest was leaving the airport - there was a long queue to go through customs. From there I just had to find my way to the city. I’d planned on taking the train but wasn’t sure where to go - the signs had just stopped. I asked, and found that I needed to get on a shuttle bus to terminal 2. Though when I got there I think perhaps it would have been quicker to walk.

Inside this terminal there’s a bit of walking to get to the train station, and my hope then was to use Apple Pay - however it seems that although my card should work overseas, Apply Pay did not, nor did other contactless payments. I lost some time to buying a ticket, having to make two attempts due to the first attempt being a card payment that failed due to needing a ZIP code. So, cash it was then!

I dashed across to the gate, and the card I just bought failed to work so they had to let me through the gate themselves. Unfortunately I’d lost about two seconds too many as the doors to the train closed as I got there. Seven minutes later the next one turned up ready for a forty-five minute journey to Clark/Lake in the city. 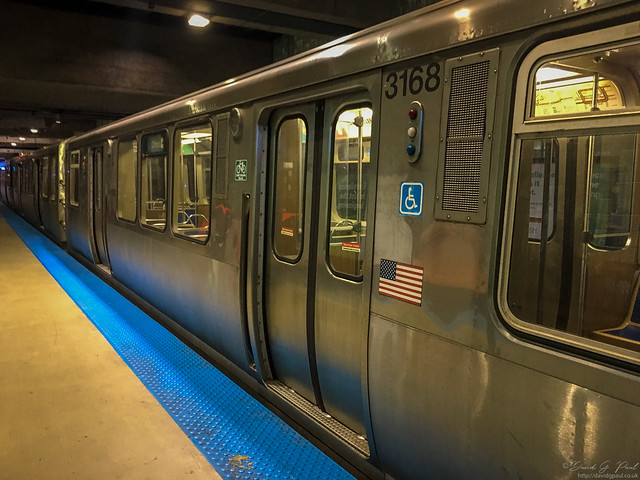 It should have been straight forward getting to the hotel from there, but I’d got my offline map set to driving directions which meant I ended up taking a very long way around to it. I then couldn’t see the hotel sign from the direction I was travelling in so did a complete lap of the block before I found it.

James was waiting in the hotel lobby, as he’d been able to check in whilst waiting for me. I completed the process, and then we headed out to Nando’s for food. By now it would have been about 3am in the UK and I’d not yet been to sleep - it’d be another hour or so before I could sleep.