After visiting Arizona, my sister had decided that direct flights were the way forward, and never wanted to do connecting flights again. As such it meant that we were flying from Birmingham and returning via Stansted. However, in going to Birmingham it meant our options for getting to the airport were limited. Rail connections don’t run early enough, so we decided our best choice would be a taxi due to not arriving back at the same airport.

It was an early start though. Our taxi was booked for 03:50, so long before either of us would be ready for breakfast. I got up twenty minutes before, and hoped I could nap during the car journey. However, it’s difficult to sleep yourself when your taxi driver is falling asleep as well - something apparent from drifting between lanes, and frequently opening and closing the window to blast himself with cool air. I think we both wanted to be sure he didn’t completely lose it.

Getting breakfast at the airport was time consuming, so by the time we’d bought something we had to make our way straight to the gate. Unfortunately we couldn’t take our hot drinks onboard the plane, so had to get rid of these first. It’s probably so they would have the chance to sell us their expensive ones that wouldn’t taste as good.

A cheap flight meant that although the seats were at the front of the aircraft, they couldn’t recline. We couldn’t attempt to sleep. When we arrived in Dubrovnik we were met by the driver we’d arranged for, and he confirmed with us he’d be taking us to the Hostel Sol. 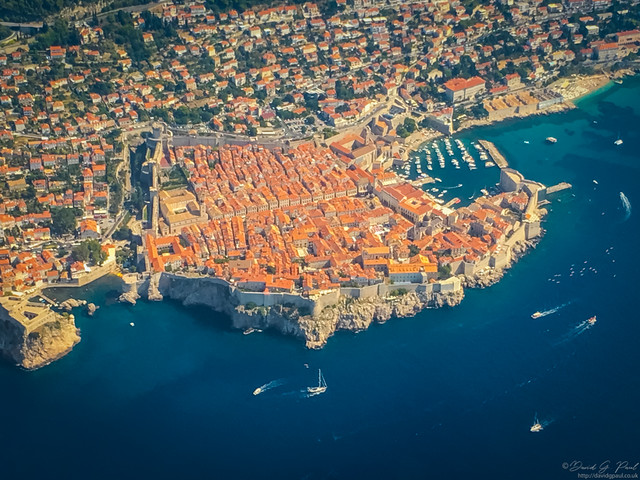 Just under an hour later we were there, and dropping out bags off in the lobby. Except it wasn’t the place where we’d be staying. Once we’d started getting ready they told us they couldn’t find us in the system. They must be joking!

The key in this sort of situation is to not panic - there’s always a solution. Just at that minute we didn’t know what it was going to be - my first thought was that we’d need to call the travel company to find out what was going on. Had they made a mistake?

As soon as I mentioned that Intrepid Travel had organised it, they told us the hostel was overbooked and the group had been moved down the road to Hotel Petka. It was a moment of panic that was soon replaced with annoyance. It was only a few minutes walk away, but we’d arrived during the soaring midday temperatures and had to carry our bags through that. Even if they couldn’t have emailed us to let us know, why didn’t the driver know?

With us finally getting to drop off our bags, we photographed the exterior of the Holy Cross church and went looking for a supermarket to buy lunch from. When travelling, getting lunch from local shops is cheaper than always eating at restaurants. I think it also helps us to experience local life a little better too - locals aren’t going to be eating street food and at restaurants every day, so we should try not to either. We bought what we needed for sandwiches, and sat down on the grass in the park. The heat was almost unbearable, but we decided we should go ahead and find our way into Old Town.

The local buses aren’t too bad to figure out, and seem to be a flat rate of HRK12 for a ticket. This took us all the way to Pile Gate, though we didn’t really linger as we figured we’d be seeing it again soon anyway. There’s a few shops around, and in one of them we bought return tickets for the cable car for HRK150 each. Unfortunately they wouldn’t accept my 500 note due to the slightest tear on one side - the condition I’d received it in from the bureau de change. Hopefully somewhere else would accept it at some point.

We walked down Stradun part of the way, and chose a side street at random to walk up. Every one of these had a myriad of steps and further alleyways. I found them interesting, but my sister wasn’t impressed by their steepness.

Eventually we got to the northern gate, and spotted the cable car station. This took us up the side of the mountain to a viewpoint overlooking the Old Town, and the Panorama restaurant. We sat inside, where it was slightly cooler, and had a drink and slice of cake whilst taking in our surroundings. 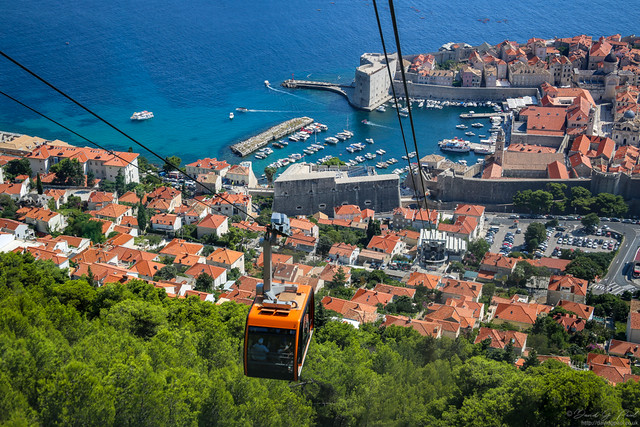 When we finished exploring the top, we headed back down to the Old Town. The heat was causing Lindsay to drink far more than normal, and already she’d got through the water we’d bought earlier on top of the drink we’d had in the restaurant. This meant buying more before we could carry on exploring. I don’t think I’ve ever taken so many breaks during the exploration of a new city.

Our random wanderings took us passed the Dominican Monastery, and along the Old Port. Here people were swimming in the water in a roped off area, and others were sunbathing. It wasn’t something either of us were really equipped for, so after a brief pause we carried on around the edge of the town. 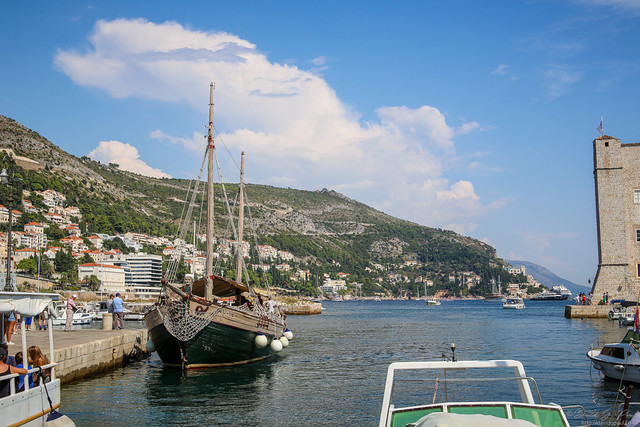 This time we headed south, and found the Church of Saint Ignatius. I thought maybe it’d be cooler in there out of the sun, but the humidity just made it worse. This was one of the filming locations for HBO’s Game of Thrones television series - the stairs were where Cersei Lannister was ‘shamed’ by the Sparrow. We’d no doubt see many more such locations as the days passed by.

Once we’d finished there we completed our loop back to the Pile Gate, purchased another bus ticket and headed back to the hotel to collect our room key. This hotel didn’t look as nice inside as the one we should have been in - it was a lot older. Maybe there’d be some explanation of this when we met up with the tour group.

There wasn’t. We talked about it amongst ourselves but Vlad, the tour leader, didn’t mention it. After providing insurance details, and quickly detailing the week, he told us we’d have five minutes to get ready then we’d all be going for a meal. We didn’t really want to be going for food with the group as we’d had a long day, but went along anyway.

We both went for Dalmatian style pasta - long tubes of pasta served with braised beef and carrots. An odd combination, but it tasted okay.

The group was mostly Australian, though apparently that’s because the tour company is Australian also. We were the only British in the group, and the only other nationalities was a Canadian and an American. It sounded like most of them had been touring the area already, so we were the odd ones out in many respects.

It was just after sunset when we left the others behind. We needed sleep; but first we headed over to the port to look at the lights reflecting off the water. It’d been a long day, so sleep was welcomed.