All the way back in July, a friend (@EmaJoyC) asked me if I’d like to take part in a 30km run she was organising to celebrate her Dad’s business being 30 years old. Without question or hesitation I agreed, and added it to my calendar. I’d not got anything else booked for that late in the year – it’d be a nice way to end 2017. Though since then I did book another two races for December…

A little later into the year I heard another friend had organised the PHPEM Unconference for the same weekend; though to me it was more important I keep my promise to do the 30K so accepted I’d miss the conference yet again. There’s always other conferences, but a 30th anniversary run only happens once – I needed to make sure I’d be there for it.

November came around, and I was off to Morocco for ten days in the mountains. It meant that when I got back I’d not really run much since the Thoresby 10 and would now need to be running almost double that. It’s not really a problem though, these days I’m happy to run a longer distance at short notice – it just might not be a good performance. That’s okay though – my plan was to hold back and keep my legs fresh for the following two weeks of races.

On the week of the run I mostly took it easy, with my biggest run being a 6:50 min/mile average run over 5.5 miles. Faster than I’d be aiming for at the weekend, but would keep the legs going. I probably covered about a half marathon in training runs during the week, so lighter than I’m used to as well.

On the morning of the event I got up at 06:30, had breakfast, and then found I needed to clear my windscreen of frost. Fortunately I’d factored that in as a possibility so wasn’t short on time, but was surprised by the sudden sprinkling of snow that started as I was leaving. By the time I got to the motorway it was coming down heavy.

It could have made for an interesting run, but by the time I reached Grantham the sun was out; but the temperature had only risen to 1C. I parked up at a car park near the church where they offer all day parking for £2.

The start of the run was on a bridle path which started opposite the Brewers Fayre. Emma’s Dad announced the start of the race, and blew the horn to signal those of us doing the 30 kilometres to begin. I’d decided to run at whatever pace Emma set so that she’d have company for the event she’d organised.

For the first 5K the route followed the Grantham Canal along a nice hard surface that was perfect for running on. I held back and enjoyed talking to Emma, whilst Chris and Daniel were running a little ahead of us. They both dropped back frequently to make sure we were going the right way.

This first bit had a few stops before we started to find a rhythm. One of these stops was when Emma found her Camelbak was peeing down her leg. Maybe in this cold weather it’d have been okay if it was warm water – but I imagine cold water would not be nice. It was sorted, and we carried on running.

Eventually we left the canal behind and started running along a muddy trail. For the most part it wasn’t too bad, but there was one little section that was so muddy it was slippy. Fortunately holding back meant I wasn’t going too fast, so was able to tackle that section carefully before carrying on along the mud.

It was amazing how quickly time was passing – before we knew it’d we’d done five miles, and a couple of miles later we’d left the trail behind and were now running on the road through Harston. That time having passed so quickly did at least mean we were having fun, and I was sure the run would be over before we knew it as well. We talked about running, about music, and literally anything. We’d originally started talking on Twitter due to #ukrunchat, and as always it’s nice to get to know another runner – especially one so full of life!

Reaching Harston meant a small incline afterwards, and then again as we ran up through Knipton. For a while I ran on ahead and talked to Chris whilst Belvoir Castle could be seen across the field to our right. It’s always interesting to hear about another runner’s experiences – it could inspire you, or give you ideas for other races to try out.

As we rounded the far side of the loop we started running as a group of four. You could tell everyone was enjoying themselves, and we even stopped for the occasional photograph – such as when we could see the other side of Belvoir Castle. This run wasn’t about position or pace, it was about being there to support a friend and to have a good time. I think we certainly were. 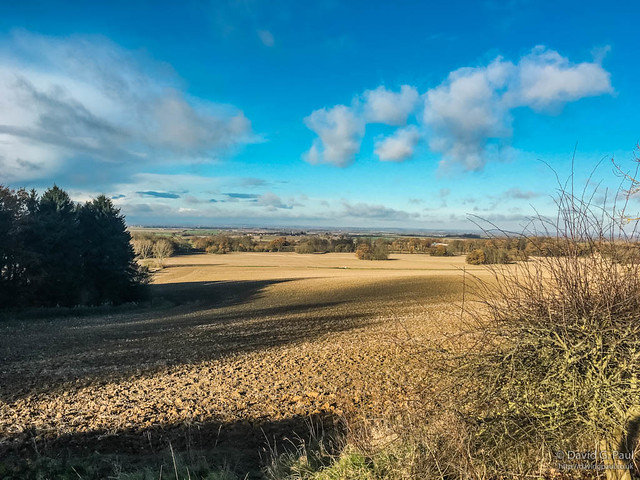 Between Belvoir and Woolsthorpe-by-Belvoir I’d stopped making a conscious effort to hold back and found my speed had started to creep up to my natural 07:30min/mile pace. When I realised Daniel and Emma were a few hundred metres behind I started walking to let them catch up. When they did we’d reached The Dirty Duck Pub where the 10K runners had started just a minute ahead of us reaching there. From there the route was back along the canal we’d ran along earlier.

The temptation to run on ahead and try to finish the remainder in 40 minutes was strong. I held back and carried on running with Emma and Daniel, whilst Chris disappeared off into the distance. He’s a much faster runner than me anyway so it’s unlikely I’d have kept up anyway.

We passed some of Emma’s friends who were doing the 10K, and then caught up with Amy whom Emma had been friends with since high school. As there were now a few of them together I decided that for a while at least I’d run on ahead to try and get my heart pumping faster. When I reached the end of the canal path I realised I didn’t know where I was going so had to wait for them anyway.

When they caught up we then ran back into the Grantham town centre, towards The Castlegate – Emma’s father’s business. I still wasn’t sure where I was going so didn’t want to get ahead of them so kept looking back to make sure they were there, and occasionally side-stepping instead of running. This became a bad idea though when I managed to run into a bus stop with some force – enough to bruise my forearm. It provided a bit of entertainment for the others!

Not long after this I was running alongside Amy and found we’d gotten ahead of the others. She did know the route which meant I wouldn’t get lost so carried on, and had a little chat along the way.

When we reached McDonalds there was a major road to cross, and after doing so we held back to make sure we could see the others before carrying on. We continued on, and every now and then I looked behind me in hope I’d see the others, or at least Emma behind; but I could not.

When Amy said that The Castlegate was at the end of the road we were rounding the corner I asked if she’d mind me running on ahead. I quickly got up to sprinting speed so I’d be able to keep the tradition of finishing with a sprint.

I finished 19 miles in just over 3 hours. For me that is considerably slower than I’d normally be, but as I said – it doesn’t matter. It was all about the experience, and supporting a friend. I did want to finish with Emma though, but I messed that up a little.

I walked into the pub and most people had already finished. I couldn’t see how busy it was to start with though as coming in from the cold meant my glasses had steamed up.

Emma and the others finished not that long after me, and the celebrations continued. Emma’s Dad thanked everyone for being there, and then Emma took over the microphone to call people up one by one for her sister to present them with a medal – a nice touch I’d not expected!

They’d put on plenty of food, but I needed leave so said my goodbyes whilst the others carried on the celebrations which would last into the night. There was also the ability to donate to Macmillan Cancer Support – a charity which is very important to her. I’d not got my wallet on me at the time, so decided I’d support this online after getting home.

A big thank you to Emma for organising a great day, and I hope her Dad’s business celebrates many more years. She definitely hit a home run with the day – it was a Joy to run with her.