It being a guest house rather than a hotel does mean that breakfast hours tend to be a little later. Here breakfast is served between 08:00 and 10:00, so I couldn’t be out exploring quite as early as I’d wanted. I had at least done more than planned the afternoon before though, so had time.

Breakfast was on the terrace of the riad, and served quickly. It was a big breakfast, though I didn’t want most of it. I finished what I could eat quickly, dropped my bags off downstairs, and checked out. The rest of the morning would be mine to do with as I pleased. 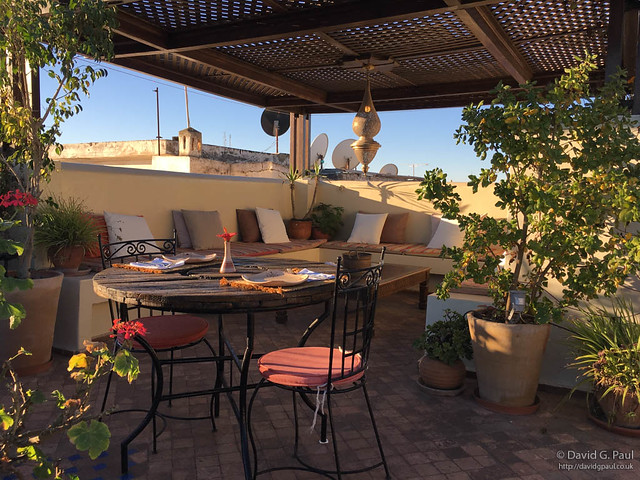 I found my way through the medina very quickly and exited facing the Kasbah of the Udayas. A number of people were standing around outside the main gate, so I decided I’d go inside the Kasbah and photograph the gate later.

Just inside the entranceway was where I encountered the first of what are known as faux guides. He was hanging around at the entrance and started talking to me, as soon as I realised where the conversation was going I told him, “I don’t need a guide” and walked off.

I started with the gardens, though they weren’t really worth the time. I started to realise I had three hours here, and wouldn’t need anywhere near all of it. I started walking slowly and started to explore some of the alleyways – some painted white and blue, and some were white and red. 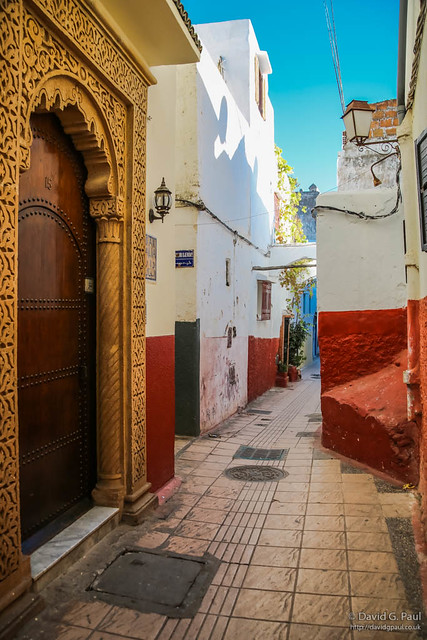 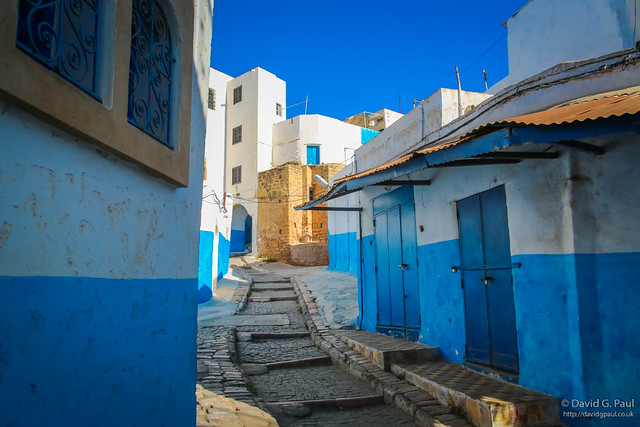 As I passed a shop being set-up I encountered another faux guide. This time he said he lives in the Kasbah and would show me around. He asked me if I know the area, I glanced at my map and carried on walking, replying with “yes” as I went.

The faux guide shouted after me, “no you don’t!”. Sure I might not know personally, but my map knew the area pretty well I’d say. I’d got that much time to spare I wanted to walk down every alleyway in case there was anything to see, but knowing that many of them would be dead-ends.

I eventually found one that led out into the open space of a courtyard. To my right were some steps leading down to a viewpoint from which I could see Salé. I realised I’d got time to walk over there if I wanted, but there was nothing over there I knew of that was worth seeing. Sure I could explore a little and maybe find something, but then, I could do the same in Rabat where at least some of the buildings looked to be older.

From there I followed a path that wound around the outside of the wall, passed a beach, and a cemetery. It seems they don’t respect the dead too much as everywhere I looked I could see discarded rubbish. I could also see a lighthouse so decided as I’d got time I’d walk there. 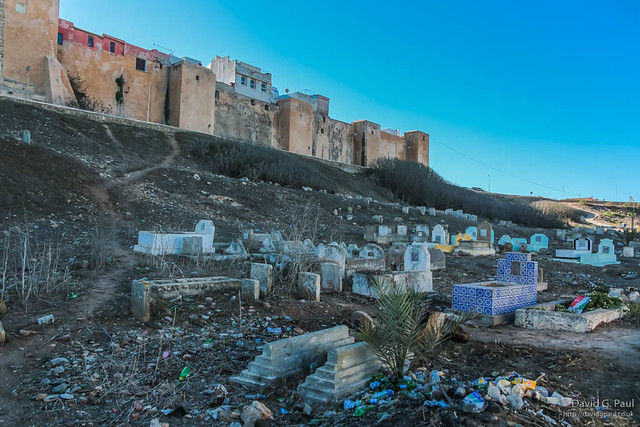 Along the way I found another cemetery; this one was filled with hundreds if not thousands of graves crammed into this space. It was quite a sight, though it looked like entrance to this was for Muslims only so I didn’t attempt to enter.

The lighthouse isn’t accessible either as it’s behind an old wall with a large wooden door. In the courtyard in front of it were a number of people exercising with an older gentleman acting like a drill instructor. 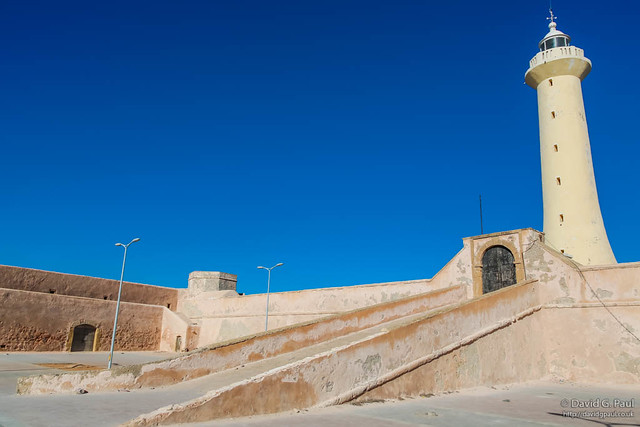 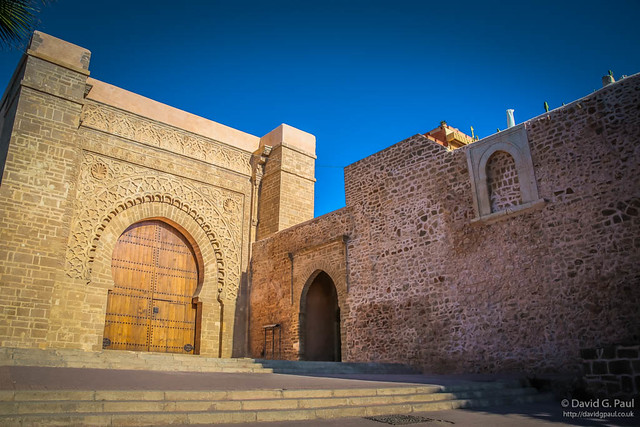 I’d not been walking along the river long when I started to hear a number of gulls approaching. This noise got louder and louder, and I wondered what was happening. I then spotted an old man that was wheeling something along, and all of these birds were flocking towards him.

When he dumped the contents of what he was wheeling onto the floor it looked like it might have been food, and soon he had hundreds of gulls fighting each other over it. The cacophony of noise was loud, and the sky filled with wings. It was like watching Alfred Hitchcock’s “The Birds”. 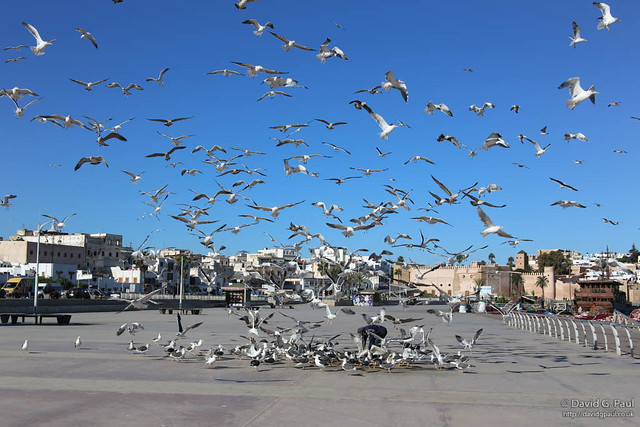 I’d still got over three hours until my train so thought I might as well keep walking towards the Hassan Tower. My thought was that it being morning would mean the sun would be in a different location and that could dramatically change the type of photographs I’d get there.

My route from there back to the Riad was an easy one, so I walked slowly and stopped for an ice cream along the way. Even with that stop I still arrived far earlier than I’d planned so carried on going and walked back to the Kasbah to get some more pictures now that the sun was higher. 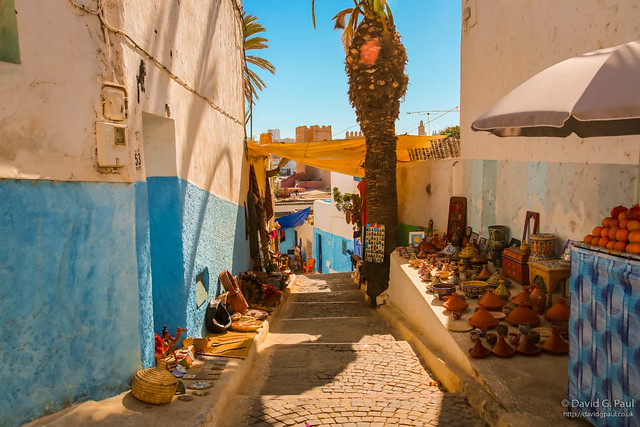 I sat inside the garden for a while, trying to stay out of the sun, and found that no matter where I sat I’d have a cat arrive on my lap pretty quickly. I guess this is how the stray cats of Morocco get their food – they’re very friendly with the tourists.

After twenty minutes of sitting I returned to the main gate and found it was now open to reveal an art gallery inside. This was something I hadn’t expected – I hadn’t even known there was an “inside” to the main gate from the research I’d done before the trip.

I peered inside, and noticed the sign saying no photography. I’m not really interested in looking art galleries so I instead went back to the Riad to collect my luggage, sort out the contents, and head to the train station.

It was a slow walk through the now busy medina, and this slow pace was making my heavy bags dig into my shoulders. I certainly didn’t take the best route out of the medina as I managed to miss a turning. If it hadn’t been for the bags I wouldn’t have minded so much, but I was now sweating, and having to reposition my bags to try and make them more comfortable. I had my camera backpack behind me, my travel pack in front of me, and a bag containing food and drink slung around my neck.

When I reached the train station I dumped by bags on the floor and used one of them as a seat whilst I watched the departures board. I sat there for about an hour, and ate some lunch; but had to dispose of the sandwiches I’d made as they’d gone mouldy. Not the sort of culture I was looking for.

I got fed up of waiting in the main concourse, so I headed down to the platform for what should have been the last forty minutes. I heard an announcement mentioning my intended train and “vingt-cinq minutes”. If I’d understood the announcement correctly, the train had been delayed by twenty-five minutes which would take my time in the train station to over two hours. I’d really overestimated how much time I’d need in Rabat. 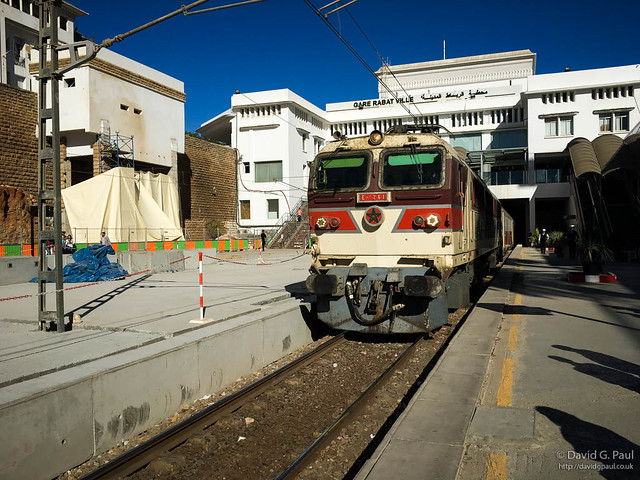 Eventually the train arrived, and once someone sitting in my seat left, I was ready for the next five hours. I passed the time by reading, and before I knew it the train had arrived in Marrakech. It had been an annoyance that someone had been smoking frequently in the train carriage despite the signs to say they couldn’t.

It was dark when I checked in to the hotel, and I followed this immediately with checking in for my flight. I now had the choice of walking to Jemaa el-Fna as I’d planned to previously, or to eat a little closer to the hotel. Things hadn’t gone to plan though – I’d barely eaten all day and was hungry, and with the added delay from the train I didn’t really want to have a long walk to get food.

I’d hoped the remainder of the evening would be relaxing, but when I returned to my room I could hear cheering coming from outside. I looked out over one of the public balconies and could see something was going on, but couldn’t tell what. 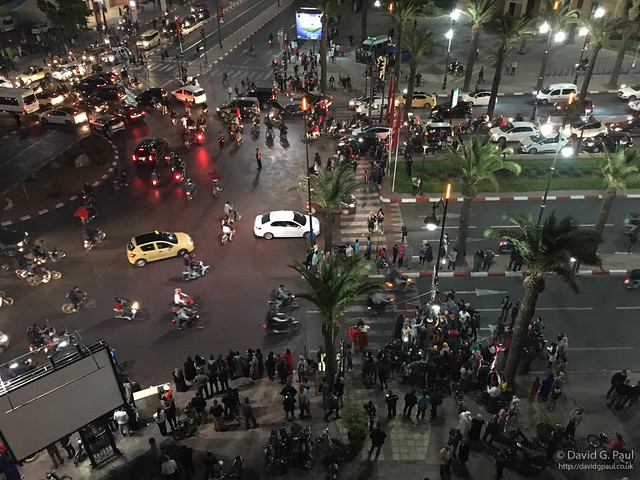 Once in my room I could see from my balcony that there were people cheering in the streets, and a lot of mopeds driving around the dual carriageway outside the opera house. They were blowing horns, and police had turned up to direct the now heavy traffic.

Morocco had beaten Ivory Coast at football, and had made it into the World Cup. Here the celebrations were peaceful, but in Brussels the Moroccan residents there had caused a riot that made it onto BBC news. In Marrakech the celebrations continued into the early hours of the morning.