At 09:00 we set off once more with a climb through the village to start, and followed the path higher into the mountains. This trail took us passed a football pitch where the dusty red ground was flat, and the outline was marked with rocks. For goalposts they’d used trees that had been cut down and tied together. It’d be a fair walk from either of the nearby villages, but apparently they do play each other occasionally. Playing football on the side of the mountain, I’d feel sorry for the ball boy. 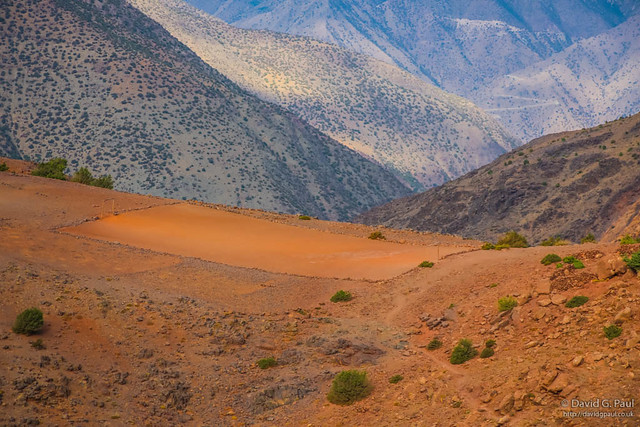 It didn’t take too long to reach the first pass and was a relatively easy climb through an area of red rocks that reminded me of Arizona and Utah. It’s amazing how eventually places in the world just blend from one into another. At the top we paused for a water break, and the mules carrying our bags caught up with us. We walked with them for sometime and reached the second pass.

The climb to this second one was harder, though still wasn’t that bad. At the bottom of this valley the mules left us as they headed in a different direction – the way they were going was to avoid the riverbed we’d be taking as it was now too difficult for mules since the building of some flood defences.

I was glad we were doing a walking pace as I think if we’d been running we wouldn’t have had as much time to take in our surroundings. I don’t think my legs would have been keen on it either as I don’t believe I’m good enough at hills for this. It gave me time to take more photographs.

At the top of the third and final pass we paused for a time whilst Hassan spoke to another guide; our intended stop wasn’t far passed this – underneath a tree where we could pause for a snack. Whilst there I sat and watched an African blue tit flying around, though struggled to get a photograph of it. 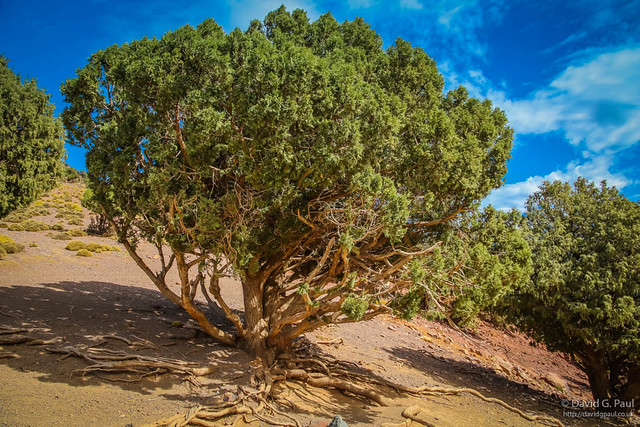 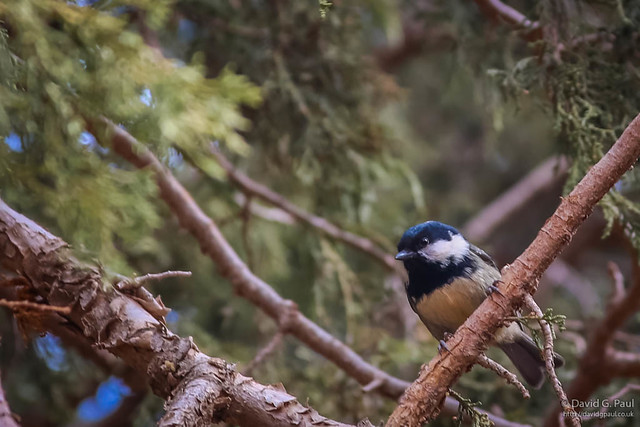 Even though this mountain is dry and far from any water, there was a frog on the ground as well. I thought it looked a bit desiccated so prodded it with a stick. It was dead. I could only assume a bird had carried it from elsewhere, and dropped it there.

Having rested enough, we started to descend once again. This would be our final descent though is the hardest of the descents on this trail. It started with loose ground that would shift underfoot, so I found myself alternating between looking at the green-blue mountainside, and the ground. 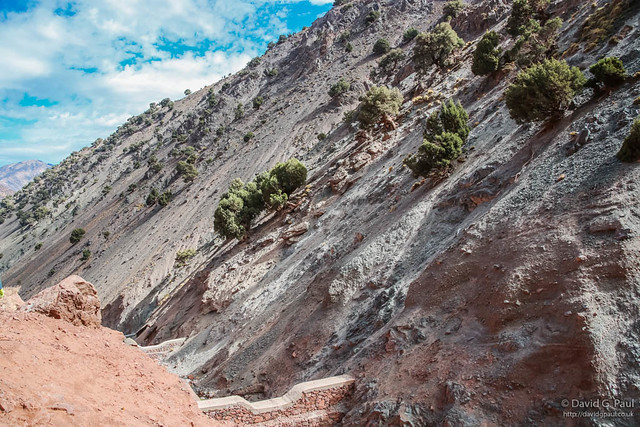 On one side we’d got the mountainside with trees that were twisted and dry-looking. To our right was the slope down to the dried-up riverbed that would likely be a raging river in the rainy season, or following the melting of mountain glaciers. In the previous few months before we’d taken this trail, they’d built a large number of dams to avoid the floods causing damage.

Part of this descent was through mounds of sheep droppings that had coloured the ground green. This wasn’t pleasant, especially when it moved as you stood on it. It’s one of those things though – you just have to deal with it and move on. The ground would soon change again to another type of surface.

Howard told us that people often complain about this descent, but I don’t think it was that bad really. The only thing making it particularly difficult was the ever present heat from the bright sun. I’d chosen to put a hoodie on to keep my arms covered, but it was causing me to overheat.

When we reached the level of the riverbed we crossed to the other side in order to pass the dam. There was a ramp up one side, and then a steep slope down on the other side with very loose ground which Hassan helped us down from one by one. I wasn’t too bothered if I slipped, just so long as I could keep my camera safe.

We stayed at the level of the riverbed for the majority of the remaining descent, and had to cross dams a few more times, but for these I found moving quickly was the safest way to cross them.

Eventually we ascended out of the riverbed and walked along a road to Tiziane, and then onward through the winding alleyways between buildings. This village has concrete paths, and seemed better off than they were in the previous village. 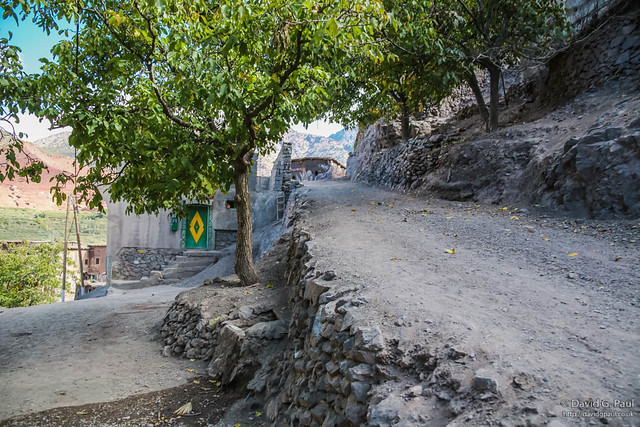 The gite here was over a stable, and I don’t think as nice. The flies around the terrace were annoying, and are ones which apparently bite. The previous gites had multiple toilet and shower facilities that were very modern, though this one wasn’t quite the same. 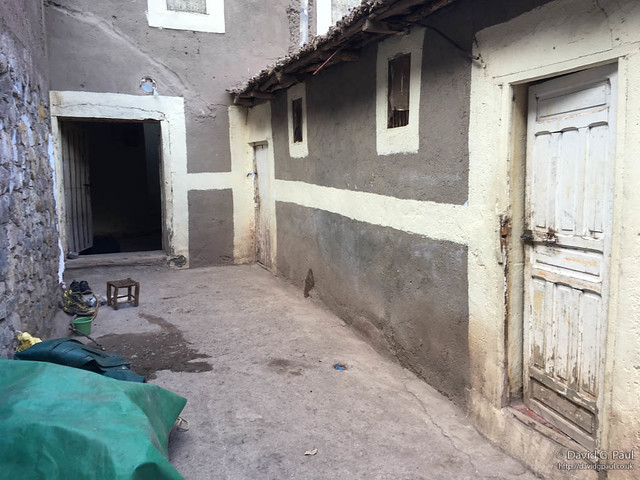 The shower was a ceramic hole in the floor with a leaking tap above it. It had a problem with drainage so couldn’t be switched on for long, and the hot water kept cutting out. I decided it was best to just use it for a quick wash.

The toilet there was one which had a tap to turn on to fill the cistern whenever you wanted to use it. If you sat down then you had to be careful it didn’t move underneath you as it didn’t seem to be fixed in place either.

We were led from the gite to the neighbouring town of Tizi Zougouart, where we walked around. John and Deb began handing out stationery and sweets to the children but were soon surrounded by them. Each one tugged at Deb, and were continuously holding out their hands for more. They’d tried to limit it to one per person, but this was too much for them and they found themselves needing to hand out more and more.

I stood and looked on from a distance, or at least tried to. In most villages their charity had been appreciated, but here it felt like children just wanted more.

Hassan took charge of the bag and continued our tour of the village, whilst the children followed like some strange version of the pied piper. Even though I’d not been involved they occasionally tugged on my arms and the back of my shirt, asking me for sweets too – even though I didn’t have any.

On our way back to the village we were staying in, the army of children swamped Deb once more. This time she fell over as she sped up to try and lose them. Fortunately she wasn’t injured in the fall.

Back at the gite in Tiziane we found a French couple had arrived who had been in Morocco for a while and were now hiking similar paths to us. They lived in the same village in France that John and Deb had visited a number of times so they had something else in common to talk about.

We had vegetarian tajine for the evening meal – prunes, courgettes, sultanas, carrots, and potatoes. There was the usual soup starter, and the dessert was cinnamon coated orange segments. 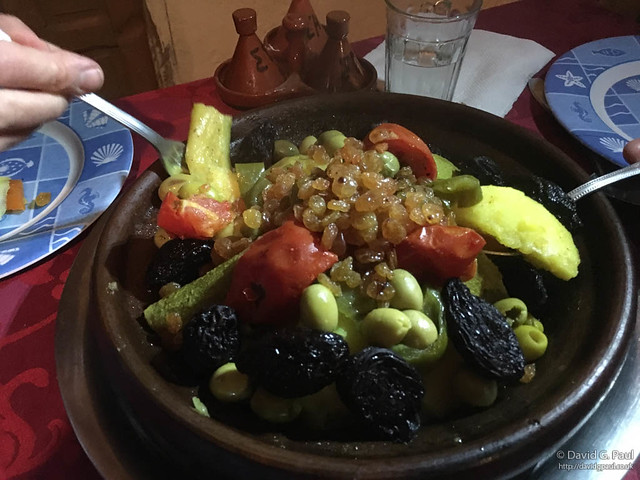 The dormitories here were the same as elsewhere – a series of mats laid out on the floor with a pillow for each. Tonight’s room was upstairs and opened out onto the terrace, and could sleep six.

As before, we split into two groups but this time there wasn’t one spare for the support crew so Hassan, the guide, was going to use the same room as us. There used to be more rooms, but the owner of this gite had moved back in along with his family and were now using two of the rooms downstairs.

We sat and played cards for a few hours in the evening, but as Hassan had already retired to the room we felt we shouldn’t stay out too late. The room was cool, probably because of the gap under the door and the wooden windows that wouldn’t quite fill the holes properly. The roof was wooden too so may not have been the best of insulators. At least I’d got my sleeping bag to stay warm.