The final day had arrived with me getting up at 04:45 to be ready and outside the hotel for 05:30. I hadn’t intended to get up quite so early, but the noise in Kathmandu finishes late and starts early so not much chance for proper sleep. Good ear plugs is something I’d definitely recommend – unfortunately mine didn’t work great.

When we got to the airport we had to figure it out for ourselves. Fortunately I noticed in the small print of the ticket receipt which airline it was so was able to queue in the right place. Although our booked flight said 102, the one we were given tickets for was 100. It didn’t seem to matter though as in the departure hall there were multiple fights with Buddha Air all at the same time. 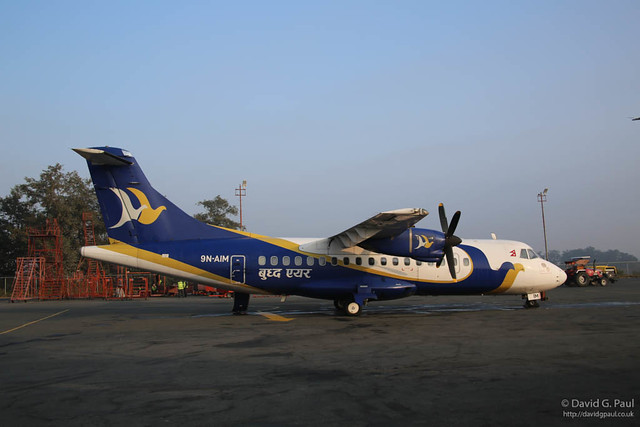 The scheduled flight time arrived, but they updated their PowerPoint presentation used for departure information to say it was awaiting a weather report. Apparently domestic flights are frequently cancelled or delayed depending on how much fog is about. This delay was only for 15 minutes, and although ours was the first in the list, when the time came ours was delayed a further 15 minutes and the others boarded. I started to keep a close eye on the time as each delay would eat into the time I’d have between flights.

By the time the plane finally took off it was 08:00 and the flight lasted for around an hour. To start with the left-hand side of the plane got to see the Himalayan mountain range including the all-important Everest. Whilst this was happening the other side got to visit the cockpit, and once the plane turned I was able to do the same. As my seat was at the front of the plane it also meant that I got in there quickly enough to see Everest from the cockpit which was quite cool! 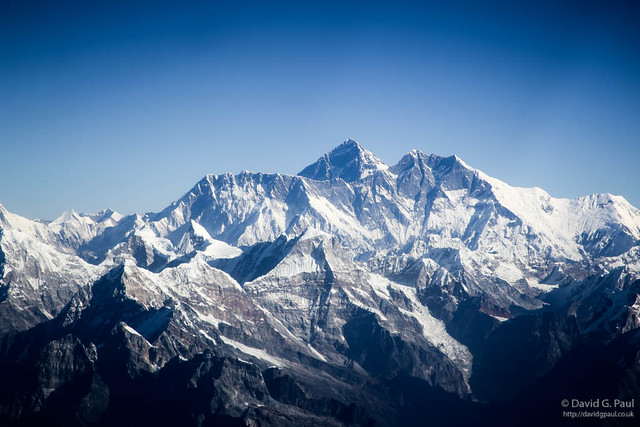 Upon landing my only thought was making sure I got my luggage from the hotel to make it back to the airport in time. As my fight was scheduled for 13:05 (and delayed until 13:15) I wanted to be at the airport for 10:00, but Trek Nepal had insisted that I leave the hotel at 10:00 instead. They must do this a lot so it made sense to trust them, though I’d definitely feel more comfortable about it once checked in for the flight.

I was back at the hotel for 09:30 so quickly got my luggage moved to the lobby and found I’d got 15 minutes to have breakfast. As we were late having breakfast there wasn’t much left and what there was didn’t taste that appetising so had a few bits, a cup of tea and then made a move to check out. At this point the hotel said they’d just ordered the taxi and it’d be 15 minutes meaning I wouldn’t catch it until 10:15!

I waited and waited, but the taxi didn’t arrive until 10:25 – much later than had been agreed. It meant I wasn’t at the airport until 10:50 which gave me less time than normal. Fortunately it was still enough to go through airport security, check-in, and embarkation in plenty of time. The embarkation queue and form was far simpler and more organised than the visa on arrival. In fact, all of the departure area seemed more organised!

Before going through security I bought a Buddha statue for $12, and bought some lunch. For 1000 rupees I was able to get a chicken burger, snickers duo, and a can of Coca Cola. The burger was the most appealing of what they had, but still wasn’t great.

At 11:45 I started queueing for security and was surprised that they have a queue for men, and a queue for women. The queue for men was twice as long so they moved some of us into the business class queue which moved far quicker and I got through in 15 minutes. It was then a long wait, almost until the departure time, before a gate was announced. This was due to the plane getting in late and causing a 35 minute delay. When leaving the gate they pat you down one last time in case anything has changed since the last two security checks.

It was the second time I’d taken off on a flight from this airport in the space of 6 hours – it can’t be often that happens! During the flight I watched an episode of The Big Bang Theory, and then Now You See Me 2, Everest, Eddie the Eagle, and Birdman. It was a lot to watch but it helped me to keep my eyes open during the flight so it’d help with adjusting back.

The Everest film told of how during a tourist trip up to the summit the weather had turned and stranded people there – some people losing their life as a result. It was based on a true story and demonstrated just how difficult a climb it is. It also reminded me that after the marathon some had gone on a trek to it’s base camp.

There were two meals served during the flight, a chicken dinner early on, and then some sort of vegetable dish covered in grease about an hour before landing. I wasn’t keen on either which meant it’d worked out well that I’d had the chicken burger in the airport.

The eventual landing was just before 22:00 Nepal time, so around 19:15 local time. Before I could make my connecting flight I then had to get through security once more, a process that was now becoming tedious – four checks for the journey even though I’d got international transfers. Fortunately this last one didn’t have a queue.

On my way to the gate they made the first call for passengers for the flight so had to speed up getting across the airport. When I got there though there weren’t yet many people about so had probably put the message out to get people there early.

This flight was a little more comfortable than the last and again served some food I didn’t bother with. I spent the time on this flight watching episodes of The Big Bang Theory and the 5 hours seemed to pass in no time at all and I was back in the UK once more, and home after 26 hours of being awake.

It’d been quite an adventure over the past two weeks, and quite different from trips in the past. The organisation and execution of the first week had been amazing, and went well enough that I’d recommend an Impact Marathon Series race to anyone. It had been a chance to look closer at what the country was really like, and then in the second week to see more of the place, and do the sort of activities that tourists usually go there for.

I was no longer reluctant to visit places by myself - this trip proved that it's possible to make new friends as you experience new things. With rafting and paragliding, new experiences were plenty. This was definitely an adventure in the Himalayas.