In order to fit everything in today I had to get up at 06:00 and we met our bus driver outside the hotel. About an hour before meeting the driver we’d all felt a minor earthquake – something common to Nepal, but something new for some of the group even though we occasionally get them in England.

When we met up with the guide it was then a half mile walk to find a tourism bus we’d be taking for the first part of our journey. When we found it I started putting my bags above the seat ready and as I was about sorted I was told to sit at the back. When I got to the back I started unloading my bags off my back again and again was told where to sit, despite having just been told. It seemed the guy responsible for the bus was a little impatient.

We set off at 06:55 which is when I started eating the packed breakfast that had been provided by the hotel. This consisted of two bananas, an orange, a hard boiled egg, a bean muffin, and a carton of mango juice. After about an hours driving we had a 5 minute break, and then again at 10:00 we had a 20 minute break. At this second one we saw some of the others from the marathon that were heading to Pokhara today – mostly Impact Marathon Series staff.

At 11:00 we’d arrived at Rapid Runner Exhibitions for the white water rafting. Unfortunately we had to wait 35 minutes for another group to arrive that were coming in from Pokhara to join us. When they finally got here our luggage was already loaded onto a truck ready to be taken to the finishing place, and we put on a warm top, a helmet, and a life jacket before heading down through a vegetable patch with a paddle to the beach.

One the beach were told a few commands and told what we’d need to do in various situations. Our group and the other group then got into the rafts and pushed out into the water. To start with we practised the commands and then set off down the rapids. 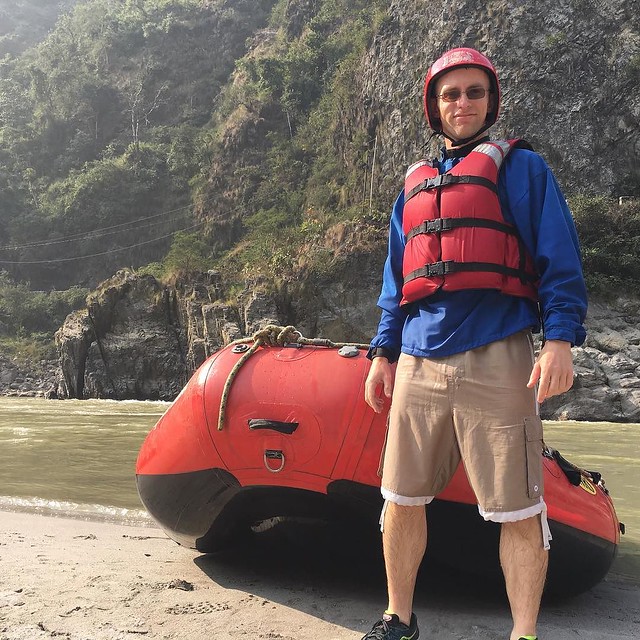 White water rafting is hard work, especially when the waves are so big they come crashing over the boat. For the first two hours we got drenched repeatedly as we avoided capsizing, and had to steer furiously. At 13:30 we stopped for a short 10 minute break on a beach where we could take photos before we had to get back on the boat to continue on. As we left this we could see a black snake crossing the river come ashore downstream.

In the last section we had what the guide described as major rapids. He wasn’t kidding either, one of the last ones we hit got us so had that the boat almost flipped as we shifted from paddling fast, to hiding inside the boat and then back on the edge steering again.

When we finished at 14:00 I thought it’d been quite fun, even when it felt really cold. There had also been a few places where we could leave the boat for a swim as well. We were led into a back room of the Ananta Jeewan Church where we were able to get dry and change into some warm clothes. In the front of this we were then able to eat from a buffet lunch of cold beans, cold pasta, some sort of meat, peanut butter, and bread. They also had a few biscuits so had a few of those for dessert.

We then needed to head on to the Australian Base Camp for our overnight stay, but our guide warned us the end of the trek might need head torches. Our guide had hoped to flag down a tourist bus, but hadn’t been able to so eventually after quite some time, at 15:45 he got us onto one of the local busses. From what I understood later, the delay from rafting had meant missing the planned tourist bus which meant a long wait for a suitable bus that would get us to Pokhara, although this bus would be slower to get there. 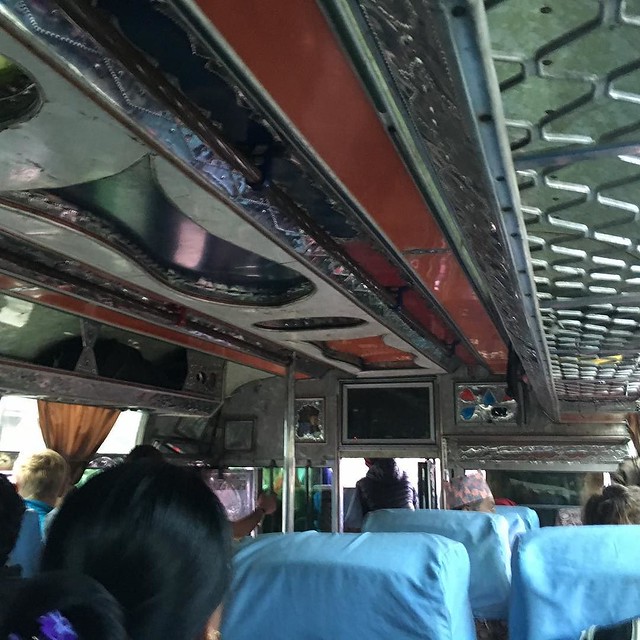 The local busses in Nepal do not have suspension and you feel every single bump on the road with some severity. The three hour journey was made even more uncomfortable by needing to have my camera bag on my knee. It was definitely an experience, and a way for us to further see what it’s like to be a local. After about an hour our guide got a call from the porters asking us where we were, so it seemed we were somehow at least two hours late.

Our guide eventually told us the hike would be at night, which was obvious as the sun was already setting. Our guide gave us the option of staying in Pokhara or carrying on to a guest house. It wasn’t that clear what this meant, but he said if we stayed in Pokhara we wouldn’t get to do the hike so we agreed to the guest house.

We arrived in Pokhara at 18:55 and got off the local bus; our guide wandered off at this point to look for our transport from there. A jeep soon arrived which would then take us on to the guest house – I noticed that this had been provided by the same company as the rapids earlier. The driver had some issues with this as he hadn’t brought rope for luggage so probably didn’t know how many of us there was going to be. Though he solved this by stacking them in the boot with the guide being cramped on space.

We arrived at the guest house in Kande about 30-45 minutes later and the guide went off to talk to the owners. The voices were raised but it was difficult to tell if it was friendly banter or them trying to come to some sort of agreement. Eventually we were led down the dark corridor beyond and down some steps that were behind bars to where there were padlocked doors. 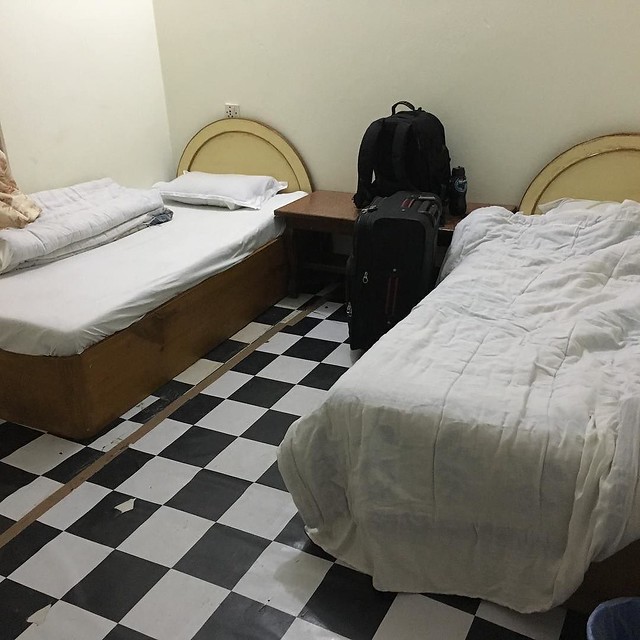 I started to think the place looked incredibly unclean and when they opened the first of the doors we saw that it had two beds, with dirty sheets and a thin blanket on a tiled floor. I think it’d be difficult to guess when they last had a clean in these rooms. I was a bit put off by this and at first wondered what we’d stumbled into. It had been our decision though, and in hindsight had been the right one. I decided I’d go bed fully clothed – unsure of how dirty the blankets really were, and knowing I’d need them to keep warm anyway. I was lucky though as in addition to being clothed I was able to have a second blanket of the other bed as this time I wasn’t sharing the room.

Back upstairs there was a very basic menu for ordering a late dinner, and the best thing on there was a peanut butter pancake. I’d have gone for a pizza but apparently they get those from the village, and it was closed due to how late it was. After quite some wait it actually didn’t taste too bad, but I was still hungry so had a kit kat and went bed.