The start of another adventure was upon me, but before it could begin I had some time before I’d need to head to the airport for a late afternoon flight. First thing in the morning I took the opportunity to go out for a run as I was unsure of what running I would be doing whilst away other than the planned race. During the run the rain was torrential as “Storm Angus”, the first named storm of the season, battered the country with strong winds and rain. 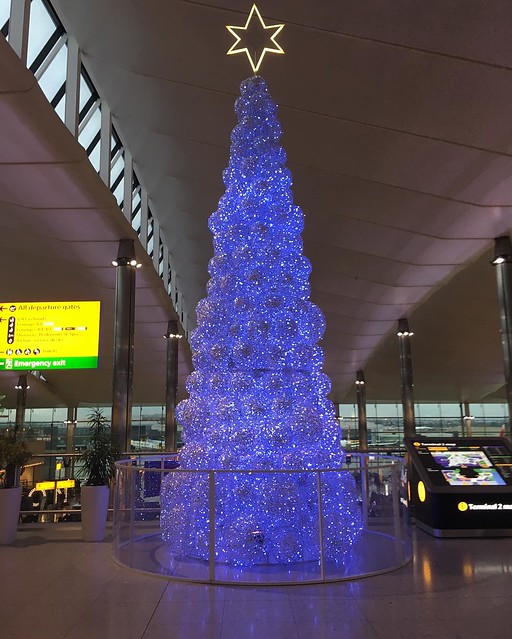 After one last Sunday roast I then headed to London Heathrow for the first of two flights. At the check-in desk it seemed at first like there was going to be an issue with the rip in my passport. It had got me home from the US okay but here they weren’t okay with it. The check-in person took my passport away and a few minutes later arrived back, confirming it’d actually be okay for travel. After that and security I then had almost three hours to waste before the first of two flights. 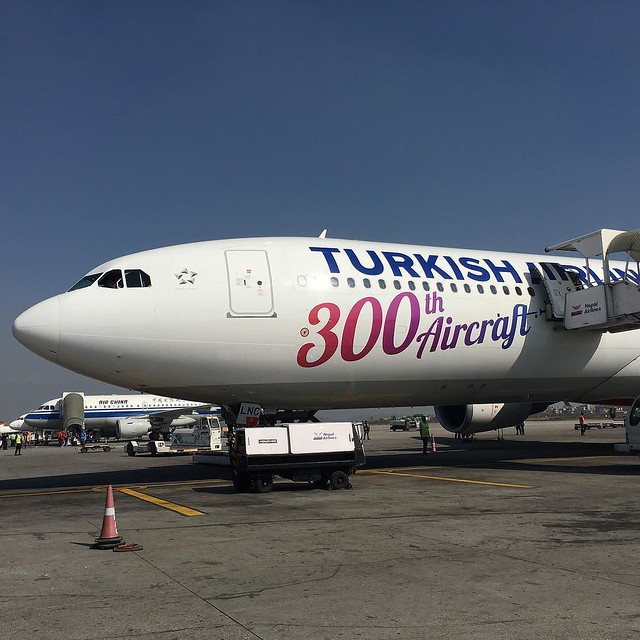 On the first flight it was a very well furnished plane with big screens, but the entertainment system for my seat didn’t work. It took off at 18:30 which was a little later than scheduled. It was incredibly warm on the plane, which felt ironic considering that when the inflight meal arrived the chicken was cold and still pink inside. Although they couldn’t fix the food, they fixed the entertainment system so I watched “The Secret Life of Pets”. When the plane landed in Istanbul there was a bit of a wait as we’d somehow arrived early and didn’t have a parking space!

After about 20 minutes we finally parked up and took a ride around the airport to the terminal building. As soon as I got there I headed to international departures and was directed to the gate for Kathmandu where people were already boarding another bus. This left in the opposite direction and was soon boarding a bigger Airbus 330.

A little later they served breakfast, but it was just a pot of scrambled egg so still couldn’t eat anything. Fortunately I’d brought a mince pie flavoured flapjack with me so had that. Time passed slowly so I watched “Ice Age: Collision Course” to pass the time. I’d hoped to see Mount Everest as we approached Kathmandu but sadly they wanted the blinds closed to start with, and I think it was too far east for us to see from the plane anyway. I did wonder though if the right hand side of the plane would have been able to see it as we circled for 15 minutes.

It took almost two hours to get through the visa collection in this tiny airport. The process required people to queue for one of two working machines first to fill in visa details and have a picture taken. The next step was to “queue” for one of three cashiers to pay the visa fee. Of the options it said it could be paid as US$25 or £20. With the current exchange rate it still meant that dollars worked out cheaper though. The entire process wasn’t that obvious though and a I saw a lot of people having to ask what was required. It was also indicated that not all the information that was “required” needed to be accurate or completed either.

Once through immigration it was then quick to get through the airport security check to the baggage claims. My suitcase was on one side, ready to collect due to how long I’d taken. I then met up with Nick from Impact Marathons Series, and some others that were already waiting in the airport. We waited for a few more to arrive then headed to Hotel Manaslu. 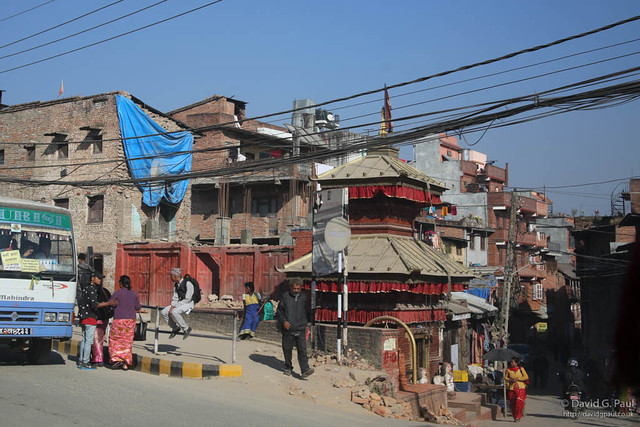 On the way our driver got pulled over by the traffic police and it looked like he was given a ticket for something. I’m not sure what though as the driving there is similar to the likes of India and China, but I know he had to show some sort of identity. My best guess was that it was for him blocking the flow of traffic in one lane due to him having changed his mind about where he was going. 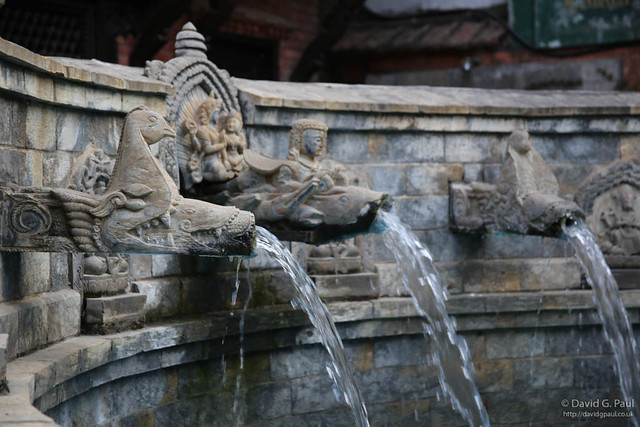 By the time we got to the hotel it was 15:00 and I would have three hours until the scheduled welcome drinks. After being giving a key to the room I was finally able to drop my bags off and change into shorts. Nick from Impact Marathon Series had hand written personalised cards for everyone and attached it to a bag with a t-shirt inside, and had placed a baseball cap on each pillow. I wandered around the hotel taking photos as the place looked quite nice. Afterwards I headed out and exchanged £80 into the local currency – far more than I was likely to need, but it’s good to be prepared. 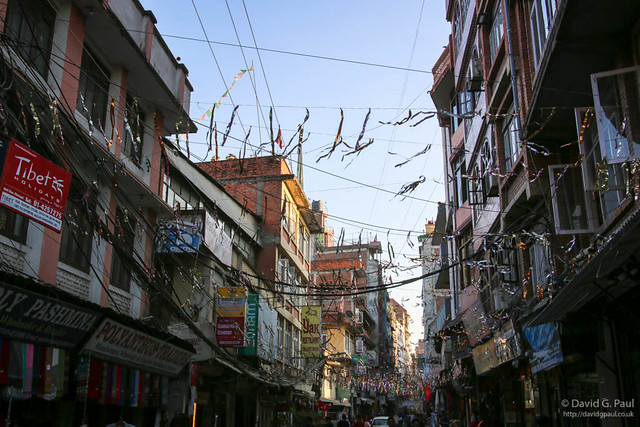 From there I walked a little over 2km to Hanumandhoka Durbar Square and paid the 1000 rupees they charge for foreign nationals. I knew ahead of going there that a lot of the buildings on this square are damaged or destroyed as a result of the earthquake in 2015. The route there was relatively easy, made even easier using an offline map. As the roads got narrower the cars became fewer, and were replaced by mopeds and bicycles.

With the rickshaws around it reminded me a little of China, especially being hassled frequently. Having been to quite a few similar places now around the world I knew to just carry on walking unless I was actually interested. One of these that runs near to the square is apparently famous and is named Freak Street and is lined with souvenir shops, food places, and pretty much anything you might need. I did wonder if I was being hassled less persistently as I was in my own as I know when I’ve been part of a tour group they seem to pester more. 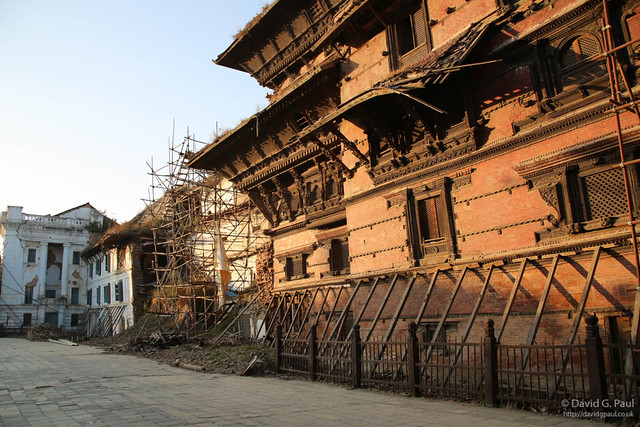 Hanumandhoka Durbar Square is also known as Kathmandu Durbar Square and is one of three royal squares in Kathmandu. This one was constructed during the Licchavi period but none of the current buildings are from that period having been reconstructed numerous times.This was also the seat of power for numerous Shah Kings between 1484 and 1896. 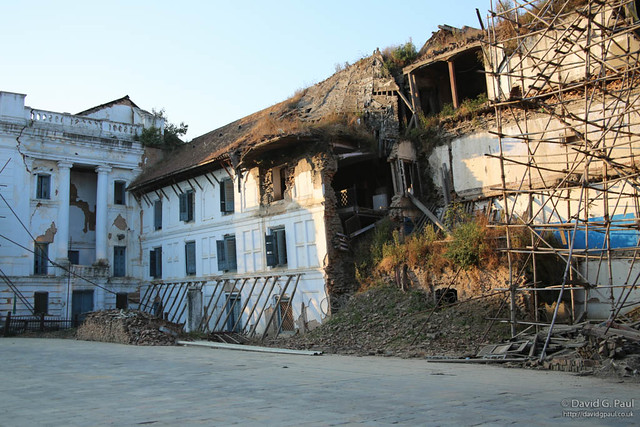 The square is quite large and is actually more like three squares combined by a path. The temples and palaces that weren’t falling down were covered with locals or obscured by ugly street lights. The look of this area really reminded me of China and Mongolia – likely because of Buddhism being their main religion. Whilst the damage was evident, it was also obvious that funds were now finally feeding into restoration efforts to restore these temples to their former glory. Behind one of the temple buildings there were even some cows wandering around freely which reminded me more of India! 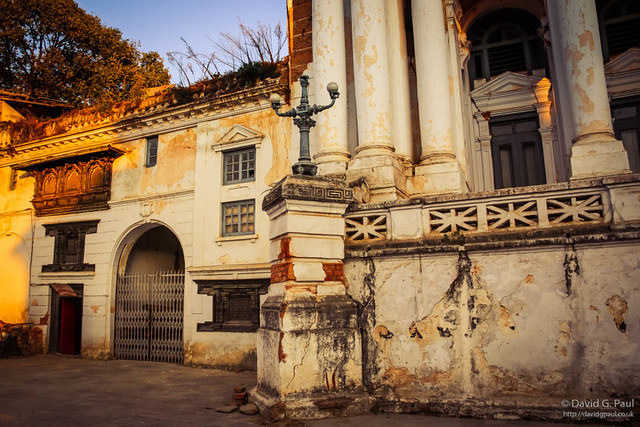 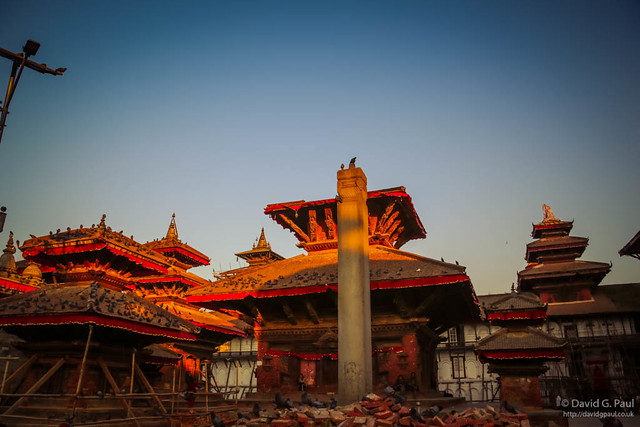 As I left the square the sun had started to set, and even though I didn’t take the most direct route back to the hotel I got there before it was completely dark. On the way I stopped at one of the many shops selling souvenirs and bought a Ganesh mask for my wall.

Back at the hotel I spoke to some of the others doing the marathon as waiters walked around with plates of deep fried vegetables and chicken momos. This was just a starter really though as before long they served an evening meal of dal bhat at 19:30. It wasn’t a bad meal either and was quite varied. Whilst people ate it was also being filmed by one of Kathmandu’s national news stations. For dessert there was swiss roll with what seemed to be rice pudding.

After the food there was then a briefing outside to tell us what would be happening in the following days. This started with Nick from Impact Marathon Series, then one of the locals from the community, and then finally a fund raising manager from Street Child. We also got to find out what time we’d need to be heading out in the morning for whichever project we’d be visiting.