Every year at the start of September I see classic aircraft flying over at home, and one year have even seen a simulated bombing run from the Vulcan as well. I’ve been told frequently it’s worth visiting the Cosby Victory Show, and have even been told that they have tanks there as well. Up until now though I’d never been able to make it there. This year however I went there with my Dad as it coincided with his 60th birthday.

The event spans three days – Friday to Sunday though on the Friday it’s apparently mostly school children that visit for classes. On the Saturday and Sunday the schedule various aerial displays and battle re-enactments.

We went on the Sunday afternoon with only four hours of the victory show left (in the morning I’d been out on a 22 mile training run). As we drove through Cosby to get to the show we saw the Trig aerobatic team flying overhead. This team of talented pilots flew their Pitts Special S-1D biplanes in some impressive maneuvers that would have pulled quite a few Gs! Once at the farm where this event takes place it’s then a bit of a drive down a dirt track to the field they use as a car park. Entry for this event was £18 per person. 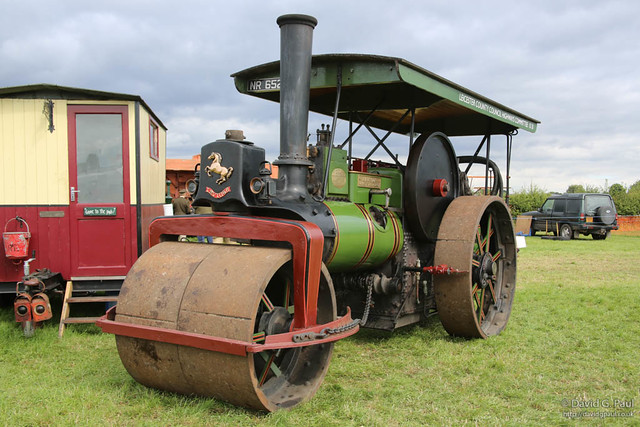 The first thing we saw when we got into the event was rows of stalls selling World War 2 memorabilia and suchlike. We weren’t particularly interested in this so headed to the far side of the field where they had some WW2-era vehicles parked up that we thought would be worth photographing. They weren’t all military vehicles though, there were also the odd staff vehicle (so the same as what the public would have used), old farm machinery, and traction engines. They weren’t particularly interesting to me, but I figured as they were there it was something to photograph. 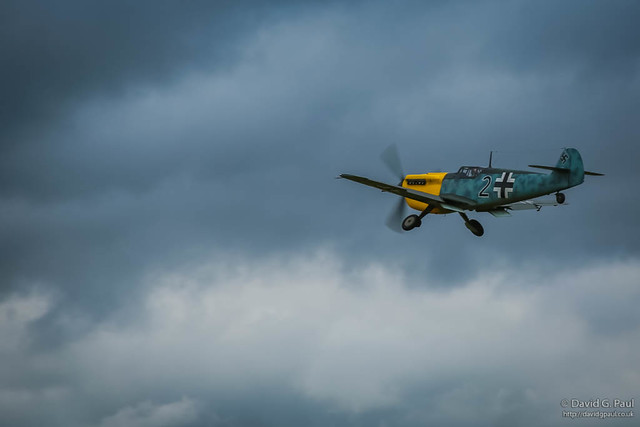 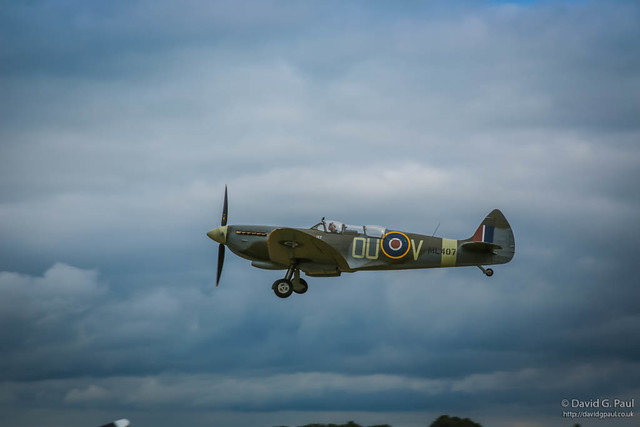 Whilst photographing these the next aerial display started and a Buchon buzzed the field alongside us giving us a great opportunity to photograph it close up. This is what I was there for – to photograph action shots of aircraft in flight having simulated dogfights as they would have during the war. This particular aircraft was from the German Luftwaffe and was a Rolls-Royce powered Messerschmitt Bf109. Behind this as part of the same display was a Grace Spitfire ML407 – one of the most iconic aircraft from the war. 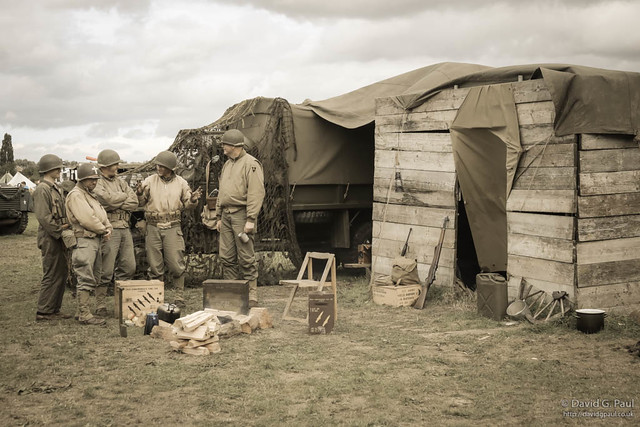 Following the old vehicles around at the head of the field we then started to come across reenacters that were either standing around their vehicles, or were part of a diorama-like scene wearing not just British uniforms but also Nazi and US infantry uniforms as well. There were soldiers laying down in dug out trenches with gun placements, others sitting around on trucks and light tanks and it started to feel like we walking around an Allied camp during the war.

From there we headed through a hedgerow to a parked aircraft – a Douglas C.47 Dakota. Unlike everything else we’d seen this far this one they were allowing people onboard (at a price). I didn’t actually bother to board it though as I’d been on similar aircraft whilst overseas. We could also see a few other parked aircraft but didn’t immediately go over to them as we heard the battle re-enactment had started and thought we should make sure we got to see it. 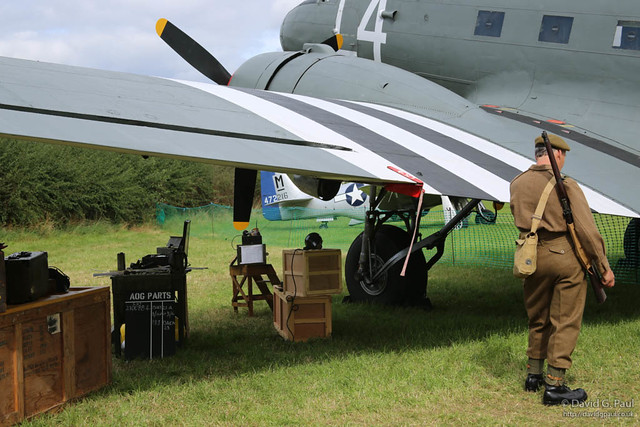 Along the way we stopped for the odd photograph as we passed more reenacters, but eventually we got there. It was crowded and blatantly obvious that to get a good view we should have arrived there earlier. It was difficult initially to see what was going on – between the crowds of people in front of us, and smoke rising from the battlefield we could only see the Axis forces, but even they were obscured. 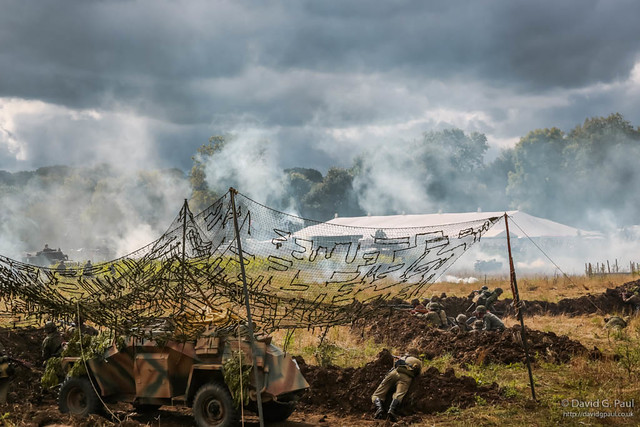 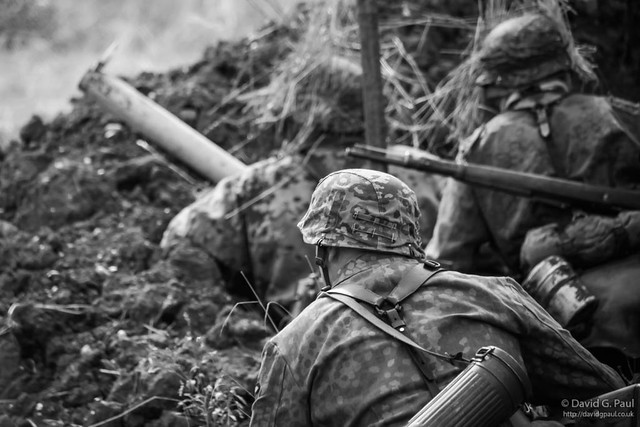 As the battle raged on we were able to move forward a bit and I could finally start to take some closer photographs of the battle. We could see Allied forces were advancing on the German position and had some armour moving with them. The Germans had their strongpoint on their side though, and some heavy weaponry.

There was a lot going on at the same time, in one area you could watch infantry trading shots, and the occasional casualty, whereas on the other side you could see tanks growing ever closer as German infantry attempted to use machine guns against them. You could almost consider this to be like a real battle, filled with confusion, though in this case they had spectators. 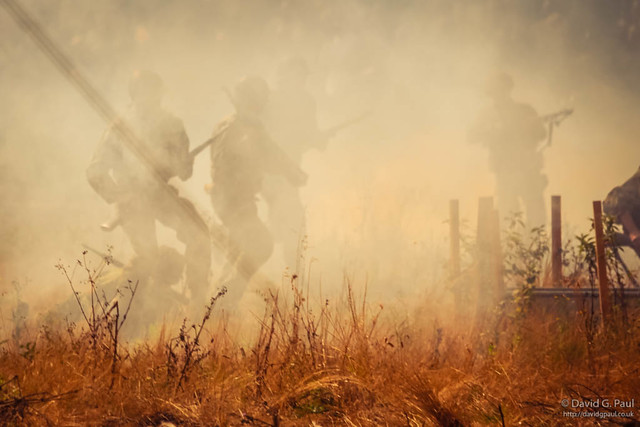 The noise was incredible – the sounds of bullets being fired, and shouts from the infantry on both sides. The smell of cordite lingered in the air, as smoke from the bullets spread and hid some of the soldiers from view. An onlooker could be fooled into thinking this was a real battle, but looking closely you could see some of them were smiling, they were having fun. Although they were demonstrating what a battle could be like, this was not one – there was no danger, no life or death choices for them to make in a heartbeat – just the need to put on a good show. 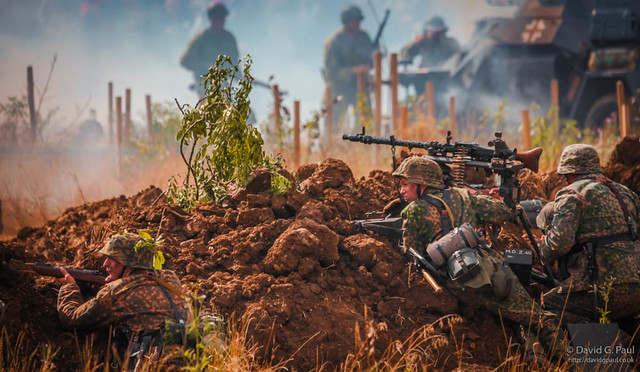 Eventually the Allied forces broken the German strongpoint and either captured or “killed” each of them. There was even one moment where a captured officer tried to escape and was shot in the back. It was quite a sight to watch this battle unfold before our eyes.

Watching the battle reminded me of HBO’s “Band of Brothers” – a miniseries that started with their training for Operation Overlord (the 101st Airborne drop behind enemy lines the night before the D-Day landings), and progressed passed this to Eindhoven, The Battle of the Bulge, and beyond. This battle specifically reminded me of the depiction of Easy Company’s march on Carentan. 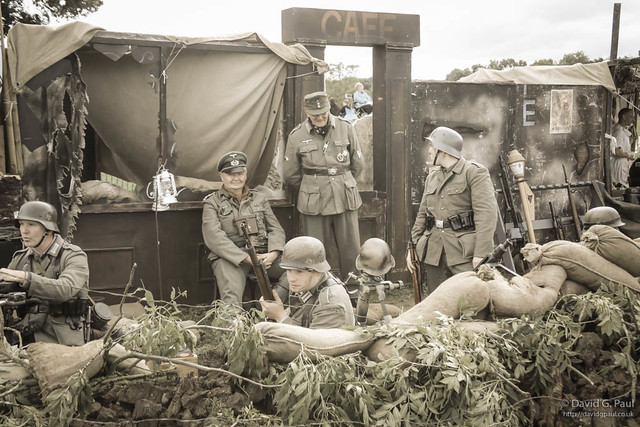 With the battle over we left the field and headed back to where we’d left off before this detour. Along this part of the field there were more “scenes” of war such as a group of German officers sitting in the ruins of a café. It reminded me of something I’d seen before, possibly a photograph – so I took my own photograph of them sitting there. There was also a half track we passed, a field hospital where they were dressing “wounds”, and the tanks leaving the battlefield also passed us here.

We didn’t stick around though, we headed into the forest… 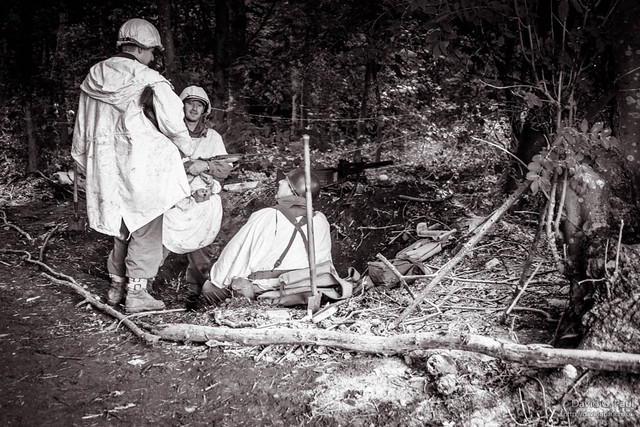 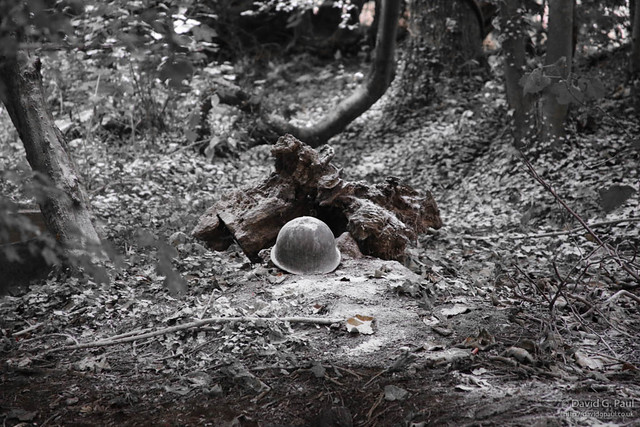 As we entered the forest the loud speakers in the field started to play the main title theme from Band of Brothers – perfect timing in my opinion. This area had been sprayed white to make it look like winter, and I think was supposed to represent the Battle of the Bulge. Here there were scattered fox holes, and soldiers in white ponchos. There was also an area made to look like it was where soldiers had fallen in battle. 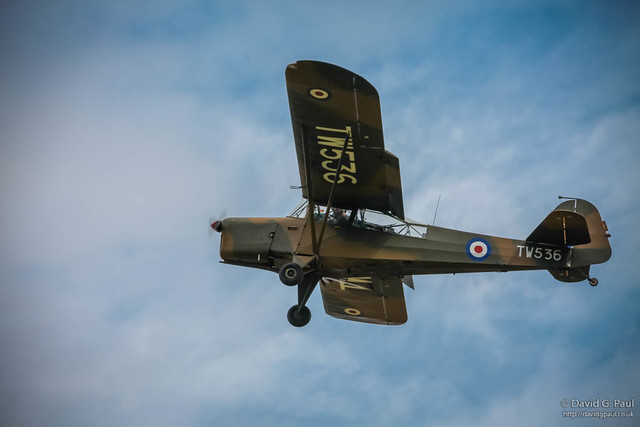 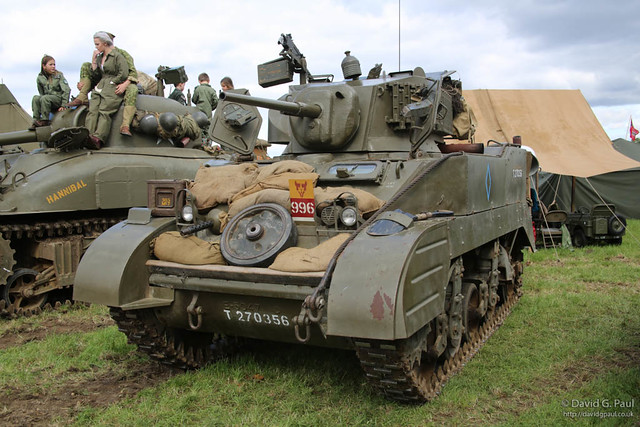 We left the forest in time to see the more aircraft flying over as we also tried to photograph the tanks now that they were approachable on the field. The remainder of this field we covered quite quickly and soon moved on to the aircraft walk (back near the parked Dakota) where we could get close to where some of the aircraft from earlier displays were parked. 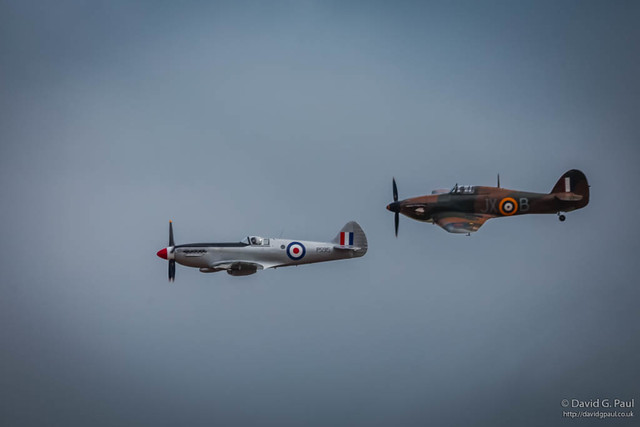 I think most of my attention was on the aircraft flying over which eventually became a reenactment of the Battle of Britain feature a Hawker Hurricane and a Spitfire. It was getting quite late in the day by this point and we knew there wasn’t much time left. I made sure I’d photographed each of the planes that was on the land and tried periodically to photograph those that were flying over head. We even saw a couple take off whilst we were there as they’d use a relatively flat piece of the field as a makeshift runway. 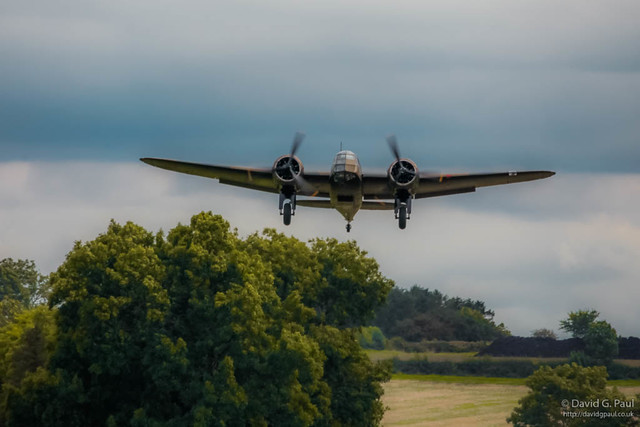 In the distance though we could see them preparing the B-17 Flying Fortress “Sally B” for take-off. This is the big finale for the airshow but we didn’t have time to stick around waiting for it so instead headed back to the car. The road out of the show takes you past the end of the runway, and we unexpectedly had to stop and wait just before the end of this so that the B-17 could take off.

By pure chance we were in the perfect place to see it as it hurtled down the runway towards us and eventually took off as I was frantically taking photographs of it. It flew overhead and disappeared briefly, but we were done and left – even though we could still see the B-17 flying around.

It was a fun afternoon and one I would recommend to anyone.