Having only been running 8 weeks at the time, and never having done 10K or a race, at the suggestion of a friend I signed up for the 6 mile “Sainsbury’s Sport Relief Mile” race at Leicester Forest RFC, Leicester on March 23rd 2014. Whilst 6 miles is not a 10K race, it is close enough as a 10K is 6.22 miles.

By the time I completed what was basically the “Couch to 5K” training I was already running over 5K so was already making progress towards 10K. I’d then decided that I’d continue with three runs a week which would be split between a 5K, doing a 1 mile run as fast as I could manage, and a longer distance run at a slower pace. Just before Christmas I managed to complete a 10K in training in 45:02 which didn’t seem too bad for my first attempt at that distance, and figured I should be able to do better in an actual race.

However I then had a month off due to the Antarctica Expedition, and following the Braunstone Parkrun had another week off due to an ankle injury. A fortnight before this run I still hadn’t managed to do a second 10K run in training and was ill with a cold that was making it difficult to run at all. Things didn’t seem too promising, and to make matters worse the only money I’d raised for Sport Relief was what I’d donated myself. At this point I thought maybe people either didn’t think I could do it, or weren’t bothered enough to want to sponsor me.

Things soon turned around though – a couple of people sponsored me which did make things seem better, and this was followed by a very generous sponsorship from Jadu, a company specialising in user experience on the web (through CMS, and other products as well as an award winning design agency) and has clients all over the UK (and also in the US and Australia). This put me over my fundraising target for Sport Relief and helped encourage me to keep on pushing towards the 10K goal.

Following this, whilst the cough and cold were still lingering I decided to plan a 10K run for after work one day. This formed part of the running I did as a virtual race (see Virtual Running). Having then completed just over the distance that was required I felt far more confident that I’d be able to do this 6 mile run. I even dared to hope that I’d be able to manage a 45 minute finishing time again like I had back in December. I then started to ease off on the training for the last week before the 10K, just to give me some time to recover. My ankle and knee still weren’t perfect and didn’t want to risk too much agitation to them before the day – especially when it was only another fortnight until the next race.

On the day of the race I spent the morning working on my next book, and at lunch just went for the normal sized meal I would at the weekend. As I got ready to head over to the Rugby Football Club for the race it started to rain. Though it was a very fine mist-like rain that ended before I set off, but had still cooled the air down a bit.

Arriving at the event it seemed very quiet – there weren’t that many people there, though from the checklist I could see there were a lot of names down. It could be that the rain had put some of the people off taking part in the event, or may have backed out for other reasons. It was cold though, very cold; not the sort of weather you’d want to be standing outside in shorts for whilst waiting for the start. On a positive note, we could wait inside for a while until closer to the start time.

At the start of the race they explained that 1 mile would be two laps of the course – though according to the distance recorded by my Garmin each lap was more like 0.45 miles as by the end of the second lap (of twelve) I was further round than I should have been for 1 mile. I felt bad though as I’d said I was going to hold back and go at a slower pace with a friend’s sister, but I lost track and ran at what is pretty much my normal pace. By lap four I’d lapped quite a few of the other runners, but felt really bad about having done it – I wanted to apologise to them, or say “hi” or something as I passed, but thought that may have seemed condescending or big-headed. I genuinely regretted it. I guess usually you don’t have half mile laps so don’t normally have to worry about this sort of thing. In this case there were a number of people that walked, so that counts for a lot.

The lap went around the edge of the rugby pitches, and to try and make sure the distance was closer to the target I made sure every corner was taken as wide as possible. The majority of the course was flat with the exception of one very sharp incline – but I used a quick burst of speed to get up it every lap. There were also a few places where overtaking was a bit questionable as one side you had a ditch, and the other side another slight ditch.

As the laps went on my mind kept wandering to other things, and I continued to pass other people. By the time I’d gotten round onto my twelfth and final lap I’m ashamed to say I’d passed most of the others at least twice, and some three times. I hadn’t meant to push that hard – but was pleased with my lap times as I’d even managed to beat my PR for 1 mile. For the last straight before the final corner and finish line I decided to speed up to a sprint, but misjudged how long I was going to be able to sprint for. I managed to sprint for probably 300 metres, but then had to slow back down not long before crossing the finishing line.

Within seconds of finishing they handed over a medal and a small bottle of water. Having not drunk any liquids for about an hour or two before the run, and none during it I guess I shouldn’t have been too surprised about how quickly I’d consumed it! 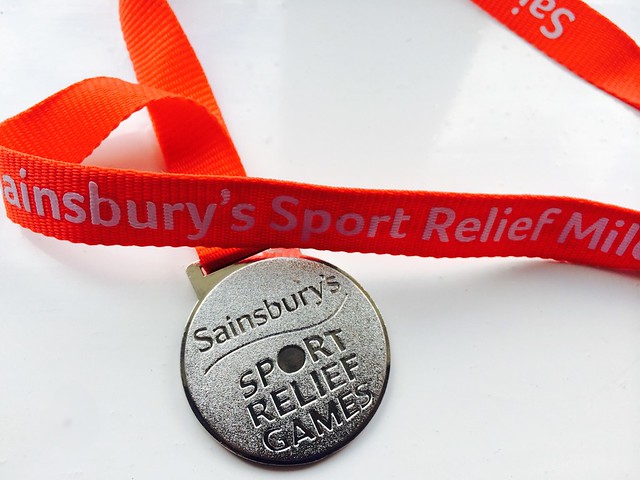 It was the first time I’d done a run only on grass, and the first time I’d run (close to) 10K with other people. I was very happy with the run, far happier than I expected to be with it – I certainly didn’t expect to come first either, so that was quite a surprise. I just wished I hadn’t felt so bad about having finished when I did, I should have kept to the pace I said I was going to.

I am very thankful to a friend/colleague who go me to start running – I think I owe them a lot for having introduced me to this. Also a big thanks for making sure I got a photo of myself at the end of the race with the medal. I hope one day I can repay the favour.

It was an enjoyable experience, and I’m pleased that I’d raised £240 for Sport Relief. Not a massive amount, but far more than I was expecting to which was pleasing. Now I’m left looking forward to the Lincoln 10K in two weeks time. I know I won’t do as well as the runners will be far more serious, but it’ll be another new running experience to look forward to.