A few days before I flew out to San Diego for Comic I went on a trip around Leicestershire visiting a few historic sights. Of these the one which is best known both nationally and worldwide is that of Bosworth battlefield. At the time I went there was only the exhibition and some role-players (can we count it as LARP-ing?) there. 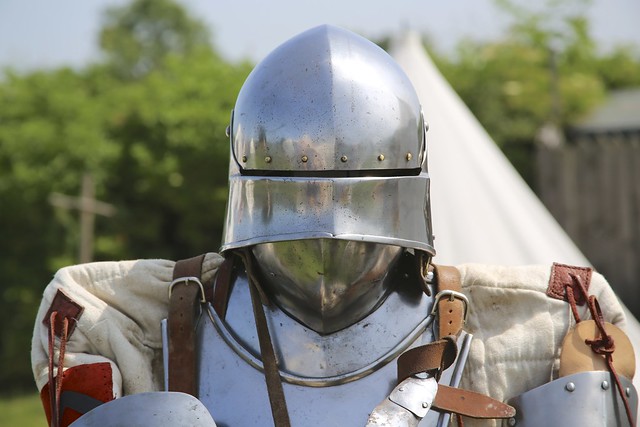 The exhibition doesn’t take long to go round, and even if you read all the material there you’ll only spend an hour doing so. As it was I didn’t really want to read much of it so got around most of it in around 15 minutes and that was inclusive of repeating some sections. 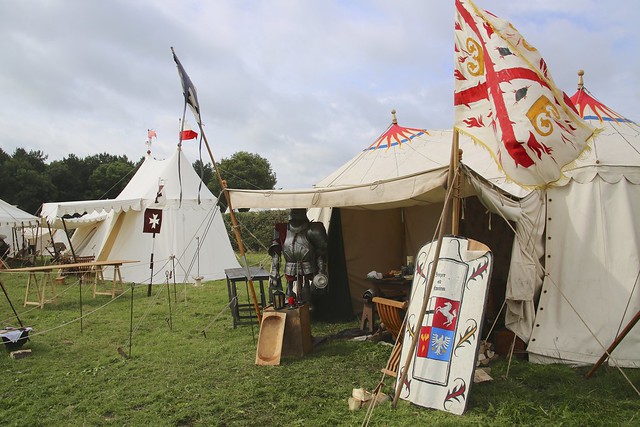 For the anniversary of the famous battle the heritage centre was putting on a big re-enactment over the entire weekend which they expected would get 8,000 people visiting. As it was a chance to see a battle I thought it was worth going back for another visit. I wasn’t really surprised they were expecting such high numbers as the discovery of King Richard III’s body in a carpark had piqued many people’s interest worldwide, and to supplement that the BBC had produced a TV series called “The White Queen” (based on a series of books by Philippa Gregory) which detailed the events of the War of the Roses (the finale of which would also be broadcast by the BBC that weekend). 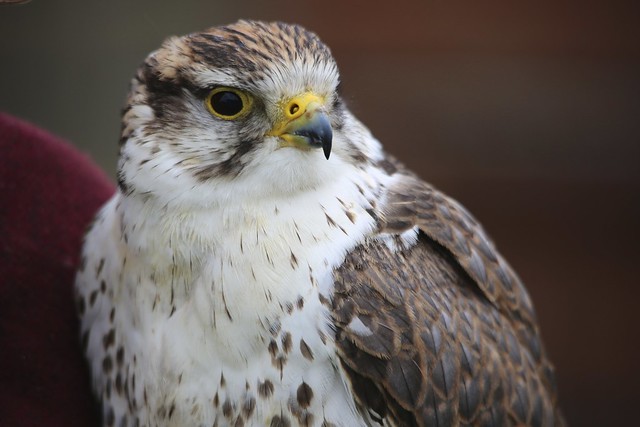 When I got to the heritage centre they were already directing cars onto the field as the car park had filled up quickly. Upon entering they handed out a programme for the days events which to start with I ignored and wandered over to where they had some birds for their falconry display. 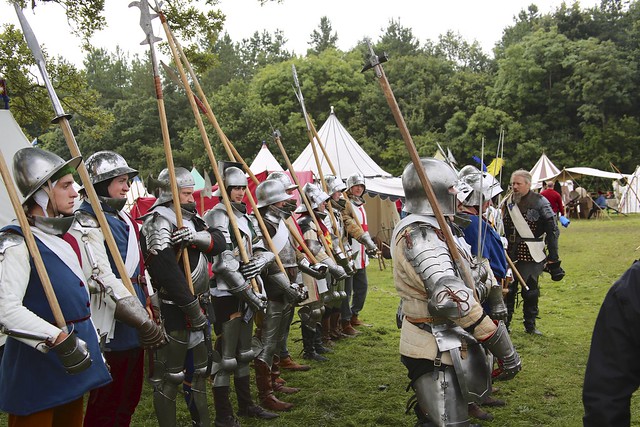 I didn’t spend long watching the birds and soon moved on through the “living history” section and onwards to the rear field where there were many old-fashioned tents set up and role-players living like they would have during the 1400’s. Outside one set of tents a number of soldiers were being briefed about the coming battle. I stood and watched this for a while and then followed them as they marched around to the main arena. 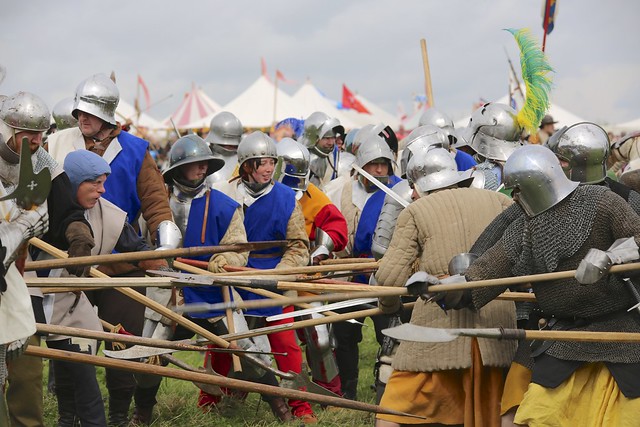 Checking the programme I noticed they would shortly be reenacting the battle of Tewkesbury from an earlier point in the War of the Roses during the reign of King Edward of York so I hung around and waited. It was quite a busy event so it was difficult to find a good spot to view from, but eventually I found somewhere with a good view of the action. 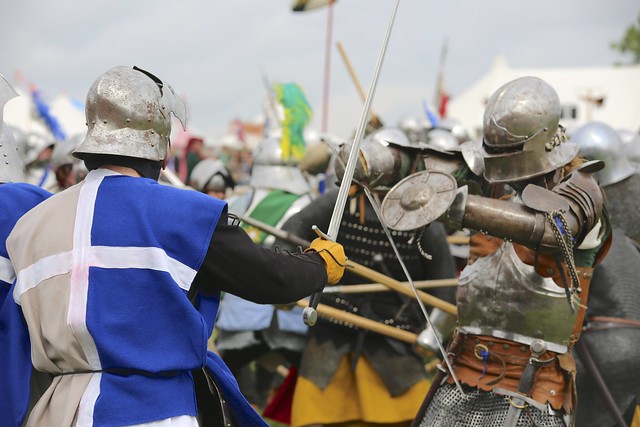 During the battle they demonstrated cannonade and fired wave after wave of arrows through the air. They were safe though a the ends had been blunted to avoid injury. As they would have during the 1400’s there was also the odd archer risk going out into the field to recover arrows to fire back. 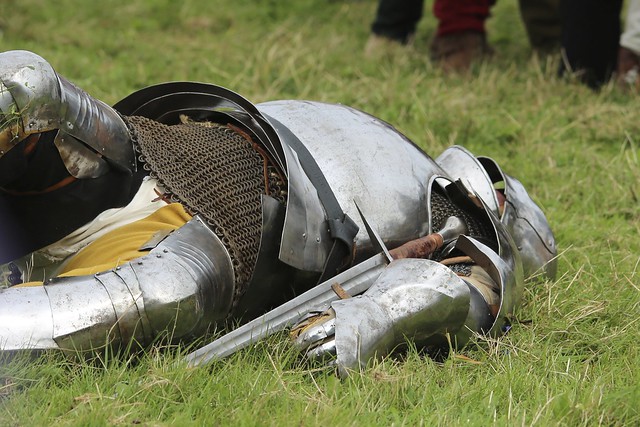 We also saw various fighting styles dependent on the weapon being used and the armour being worn. Those with lighter armour had more maneuverability but less protection against the rain of arrows. Unlike in Hollywood movies we saw the swords being used correctly too – using the pointy end only as the sides would be blunt and better for bashing with. There were also halberds being smashed together and beaten away. By the end the Lancastrian heir, Prince Edward had been killed by the forces of King Edward (though the commentator reported that it was King Henry that had been captured during the battle). 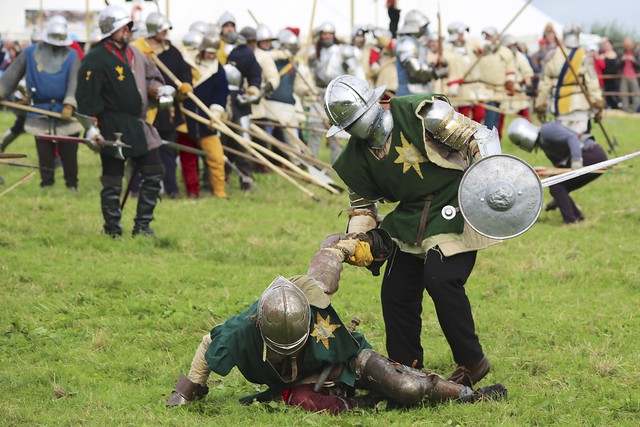 During the battle a friend had arrived and after the battle we headed over to where I’d seen the birds earlier. As it turned out though the “Birds of Prey” display was back in the main arena so we had to head all the way back and managed to find another spot to watch from on the opposite side. 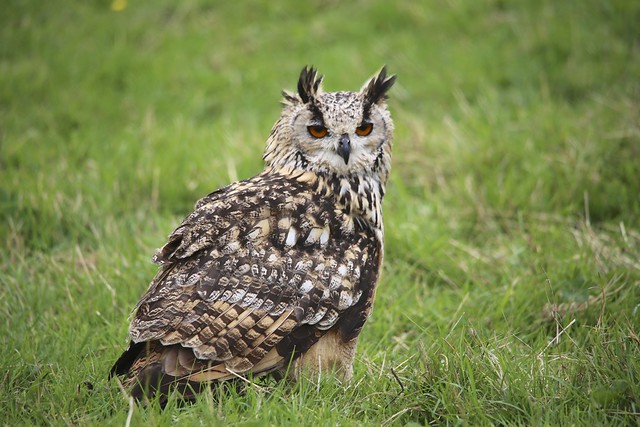 For the display they had two birds – an owl which would have been used as a decoy by hunters and one which they would have used to hunt meat for the King’s table. This was also a chance for spectators to take part by helping to handle the owl. Once this was done we headed over to the Tithe Barn to get some food. It was incredibly packed, but the food there was fairly reasonable although at the time I thought it seemed pricey. I had chips, a slice of steak and ale pie, a flapjack and a drink for just under £10 so probably not too bad really. It was a chance to sit down, but as there was no seating indoors had to stay outside where it had gotten chilly and very windy. 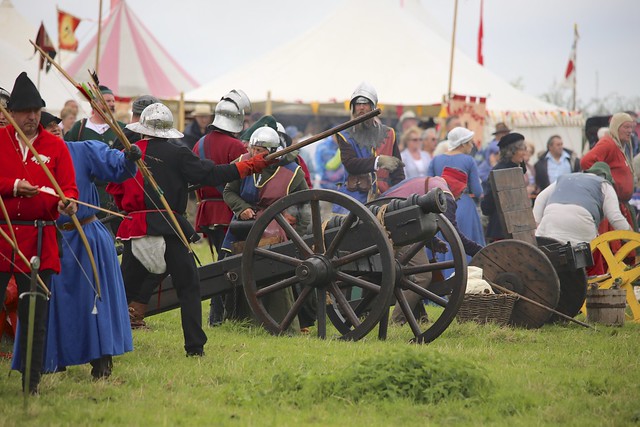 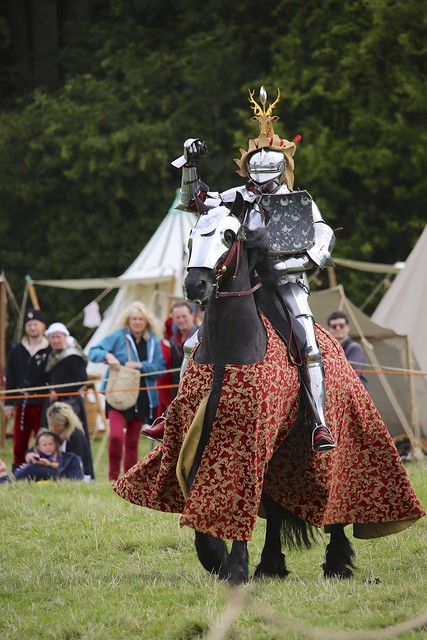 After dinner we headed back to the main arena to catch the end of the weapons demonstration. The sound of the cannons, especially when firing together, was incredible. Considering the sounds from 50 metres it must have been incredibly ear-shattering for those firing them. They demonstrated the use of arrows and cannons effectiveness against infantry, though of course no one was actually hit by anything.

Following this was some jousting, an apparently unscripted event which was dependent upon the actual skill of those taking part. The newspapers had reported that a world jousting champion was going to be playing King Richard in the battle, so presumably he was one of the ones that would be taking part in this tournament also. 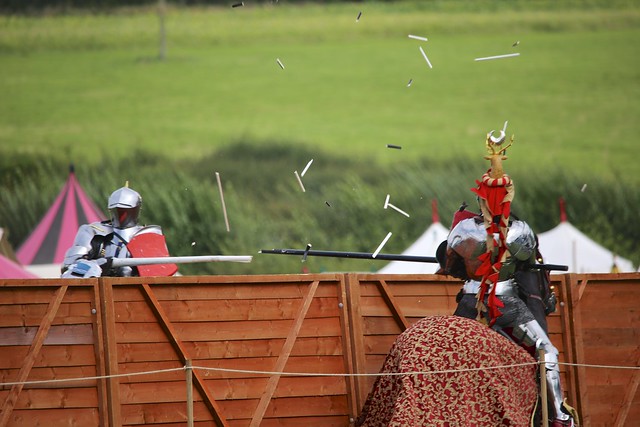 It took them a whilst to set-up the list, but once they had the knights rode in one by one followed by two “referees” and King Richard III. They then took it in turns and they were judged not just on where their blow struck, but whether their lance had shattered. The winner then took on the King (and won). 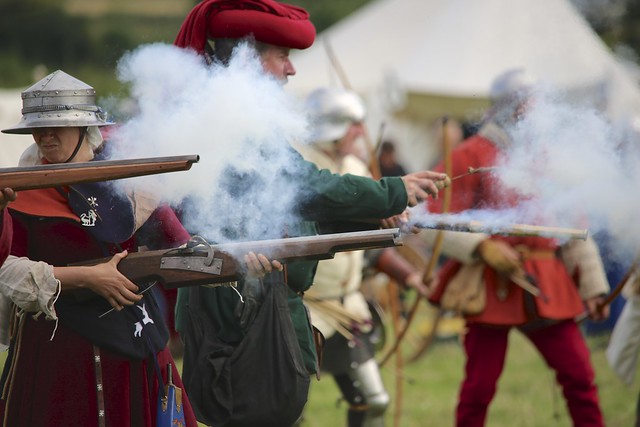 After a brief break back in the Tithe Barn it was then time to watch the big battle of the day, The Battle of Bosworth. This started with the Yorkist army marching out into the field and a minute’s silence in remembrance of those who died. 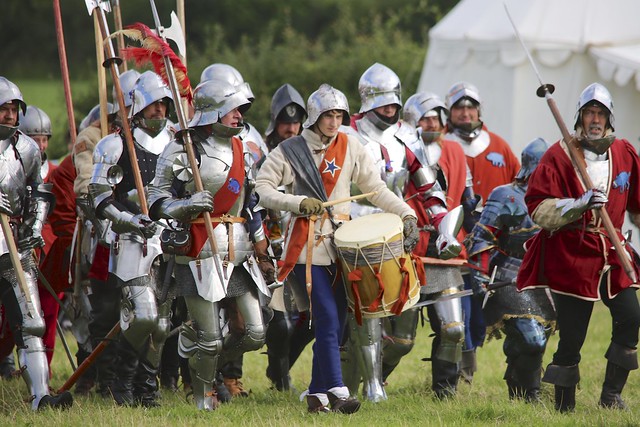 After this the army of Lord Stanley marched into the field and after a brief parley with the King they decided to stay off to the side to see what happened between the Yorkists and the army of Henry Tudor. The battle then started in earnest with multiple groups maneuvering and entering the fray. 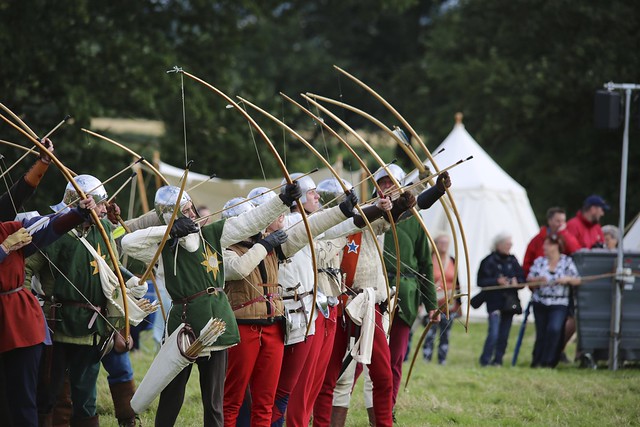 Once again there were soldiers firing weapons that wouldn’t be invented for another 100 or so years. There was also wave after wave of arrows being fired into the phalanxes. After about 20 minutes King Richard III charged into the battle on horseback but was dismounted from his horse and was soon struck on the back of the head. The mob then surrounded the King and beat him until he was dead (of course he wasn’t really… but that’s how the story of the battle goes). 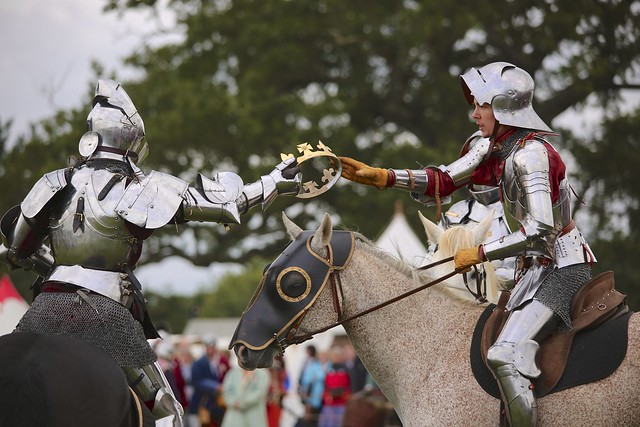 The crown was then stripped from the fallen King and taken to Henry Tudor, now King Henry VII of England. The body of Richard was then thrown over the back of a horse and paraded around the battlefield. At the end of the battle the re-enactors were applauded before they charged at the audience for a greater applause. 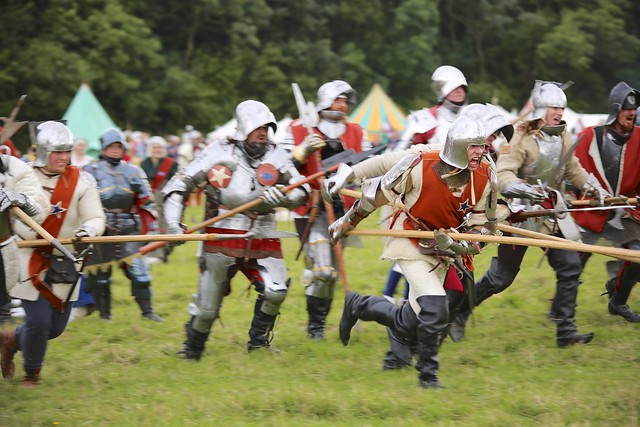 It was a good day out even if it had rained at times. A satisfactory way to celebrate the long ago death of a King and one of the closing battles of the War of the Roses, the war of cousins.