It was a long journey to get from Leicester to San Diego. As I was travelling alone this time I decided I’d be going from Birmingham Airport due to it’s relative proximity compared to Heathrow. It did however mean that the flights would not be as good. On the the evening of the previous day I had to catch the train from the local train station to get to the airport – I always find this a little dubious as the train doesn’t always stop at this station even when scheduled.

Unfortunately there weren’t any decent times available for the trains – I had to be at the airport for 03:25; the last train that night was at 22:33 and would get me to the airport for 00:05. The next train wasn’t until after 06:00 though meaning I’d have to get the earlier train and hang around the airport for about 3-4 hours; it was a chance to try and get some sleep though. I’d also tried to get a quick nap before leaving out once I got home from work however due to the temperature this just didn’t work.

By the time of the flight I’d been up for 24 hours already and had another 18 hours before I’d be touching down in San Diego. This isn’t particularly ideal when you’ve got 3 days of intensive tourism ahead of you, but by this point I was more or less used to it due to previous trips.

When checking in my luggage I was a little unsure whether or not I needed to collect it in Frankfurt or not. According to the check-in desk it was checked in all the way through to San Diego but it’d need to pass it through customs in Los Angeles. It didn’t make much sense to me at this point as I couldn’t see how it could be checked all the way through if I’d need to put it through customs in LAX. This did of course make more sense once I got there.

Frankfurt airport was fun – the plane landed 10 minutes before the boarding time for the next flight yet I had to take a bus to the other end of the airport, then walk back to the opposite end of the terminal, take a shuttle to another terminal and then get to the other end of that one including time spent going through security again. By the time I reached the Boeing 747-8 I was already 15 minutes late. Fortunately due to the size of the aircraft they were still boarding. If I wasn’t quick at walking I certainly wouldn’t have made it whilst there was still a queue, I was probably quite lucky I arrived at the shuttle at the right time too. 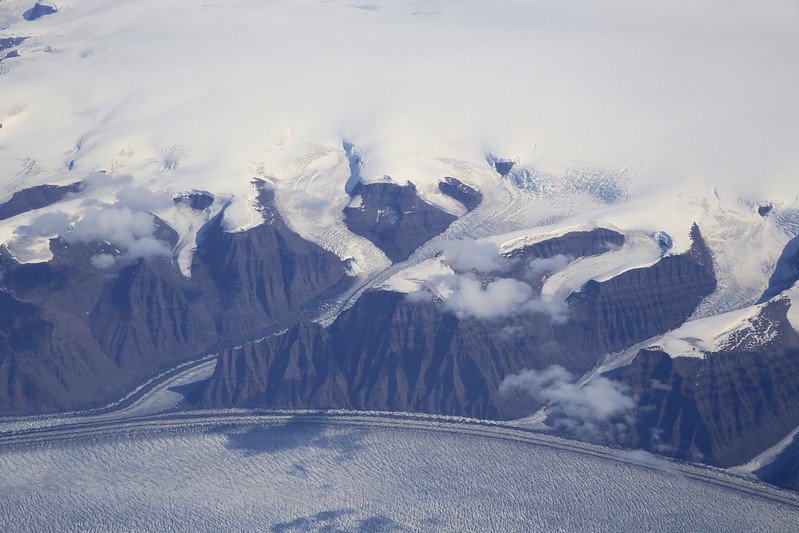 Although an 11 hour flight it was one of the better flights I’d been on – Lufthansa really know how to look after passengers. At the start of the flight they gave out pretzels, later there was spaghetti bolognaise (which for airplane food was good!), and even a snack in the form of a toblerone later. The later meal wasn’t as good but didn’t bother me as I’d got a cheese pasty saved from Birmingham. Whilst on this flight I watched Jack the Giant Slayer, some TV episodes, and The Incredible Burt Wonderstone. 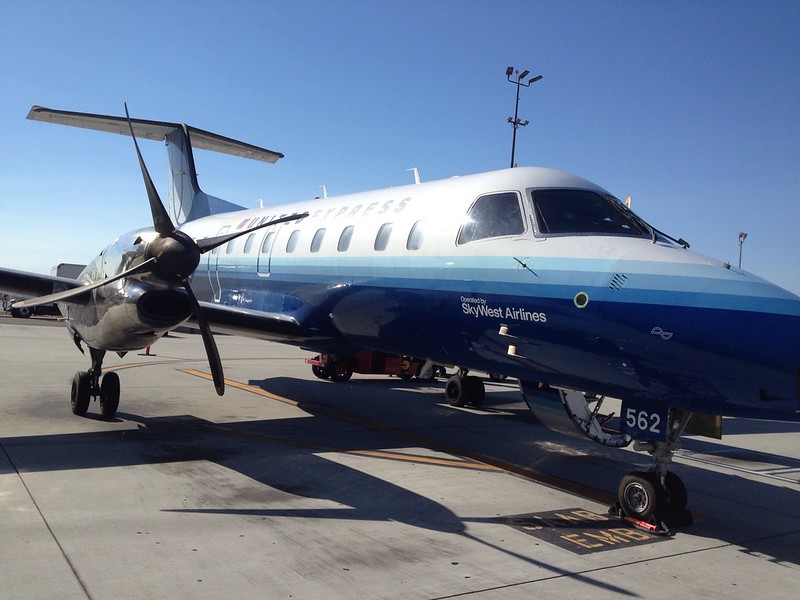 Arriving in LAX feels like organised chaos, but it’s understandable – it’s a very busy airport with a large number of terminals and flights. I suspect it’s busier and larger than London Heathrow, but didn’t get to find out. This was treated as an international arrival rather than transit so had to go through the full immigration process. At first it seemed my luggage wasn’t going to arrive, then I realised I was at the wrong baggage carousel! As I’d got food in my bag I had to declare it, but it wasn’t a type that bothered them so they let me straight through. It was then a short ride to terminal 7 where I had to go through security yet again and waited for the onward flight to San Diego. This time it was a far smaller plane with propellers, and it would only be a one hour flight. By the time I flew out I’d been awake for 42 hours.

The airport in San Diego took minutes to get through due to it being a commuter terminal. However it took over an hour before I could meet up with friends and leave the airport, although they knew which flight I was coming in on. They had gotten a lift with a hotel driver (not a hotel they were even staying at!) that was going to the airport, but went to the wrong terminal so had to do a loop of the airport. It was then a short wait to get a cab to the hostel we’d be styling at. 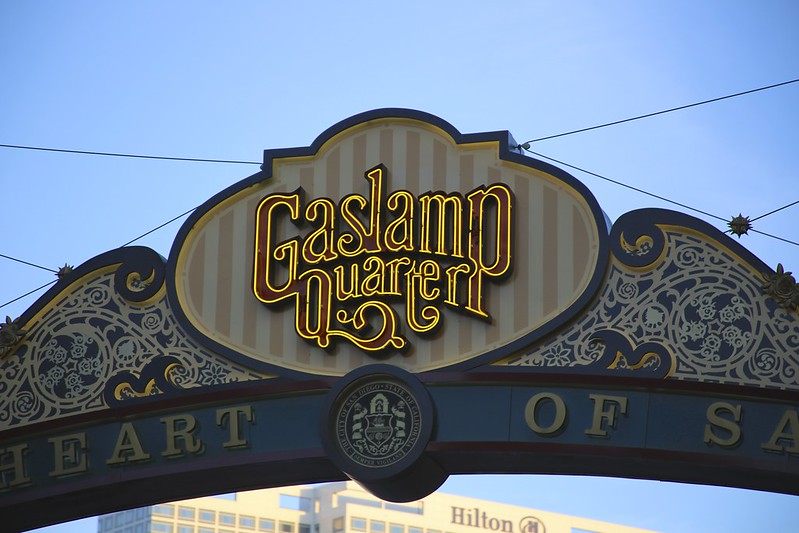 The hostel they booked was in the historic Gaslamp Quarter and was extremely close to the convention centre. It was also surrounded by restaurants and bars so it seemed likely we’d find somewhere to eat later. After checking in and dropping off my stuff we headed out to explore the nearby area. They’d already been in San Diego for sometime so had already seen a lot of the city but it had changed so much in the past day with off site events for Comic-con being set up. 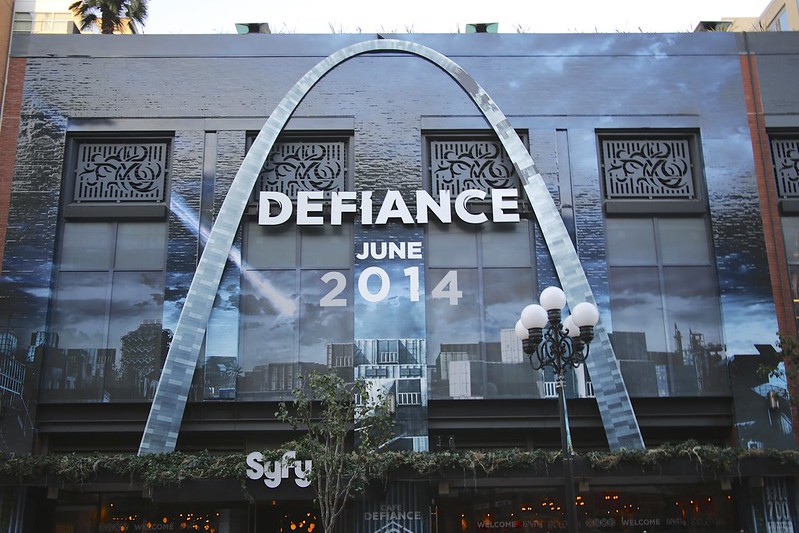 To start with we headed towards the convention centre and along the way we passed a bar that had been done up by Syfy channel to include a (smaller) replica of the arch in St. Louis as seen in the TV series Defiance. This included a large logo and even renamed the place to “Cafe Defiance”. The interior was basically the bar part of the “Need Want” and even had the sign. 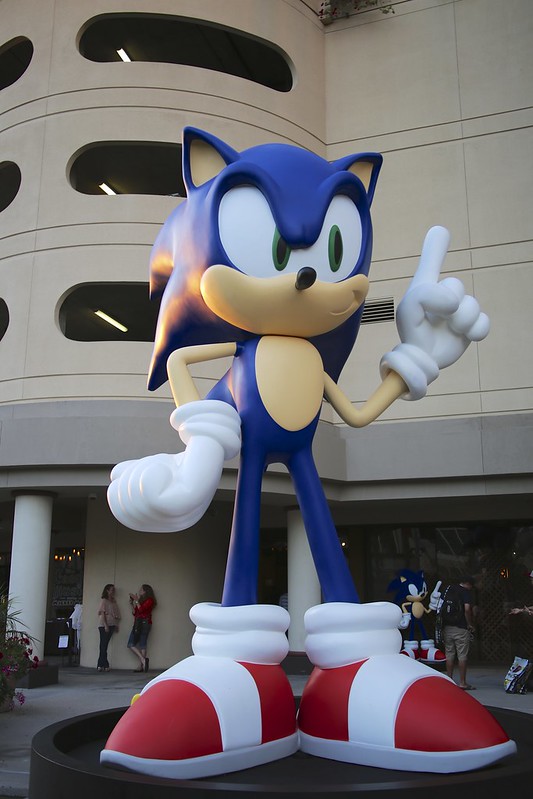 On most of the lamp posts they had signs either side to advertise Comic Con and either Captain America or Thor. Other buildings had advertisements too, such as one had an advertisement for The Amazing Spider-man 2. Along the initial route we took we saw a few things being set up ready for the following few days which included a giant statue of Sonic the Hedgehog to advertise a SEGA gaming lounge.

On the way back we noticed that we weren’t far from the Marriott so headed inside as I’d got a receipt with me for picking up some Comic Con t-shirts I’d pre-ordered over the internet.

When we found the place to pick them up inside the hotel there was a bit of queue and was told that they may not let any more in so decided I’d go back the next day to try again. 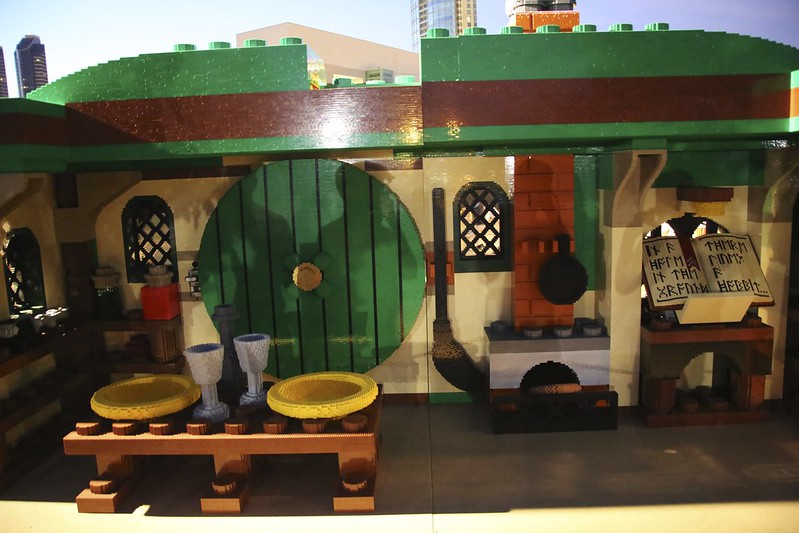 We then walked across the front of the convention centre and into a grassy area where they’d got large inflatable versions of characters from the Teen Titans cartoon series, LEGO versions of Batman, Robin and the Joker, and a LEGO version of Bag End from the Hobbit along with a number of dwarves and Bilbo Baggins himself.

These LEGO creations were all quite large and did look like the characters. Between these there was a replica of the Mystery Machine van from the Scooby Doo cartoon and live action movies. 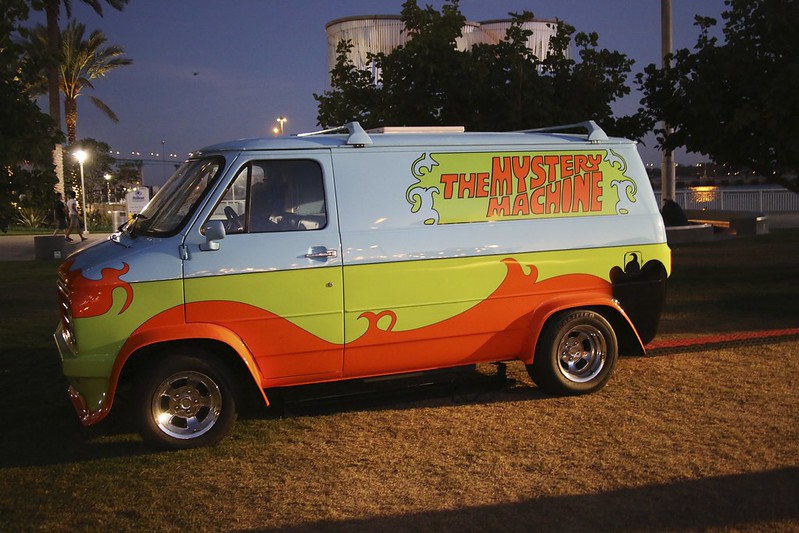 From there we went over a railway bridge into a carpark where they’d set up a few more “booths” advertising various games, TV series and movies. The first thing we saw here was a large inflatable Smurf and a car advertising a new Mad Max game. Parked here was also a Tatooine Sail Barge which was there for the Course of the Force marathon. 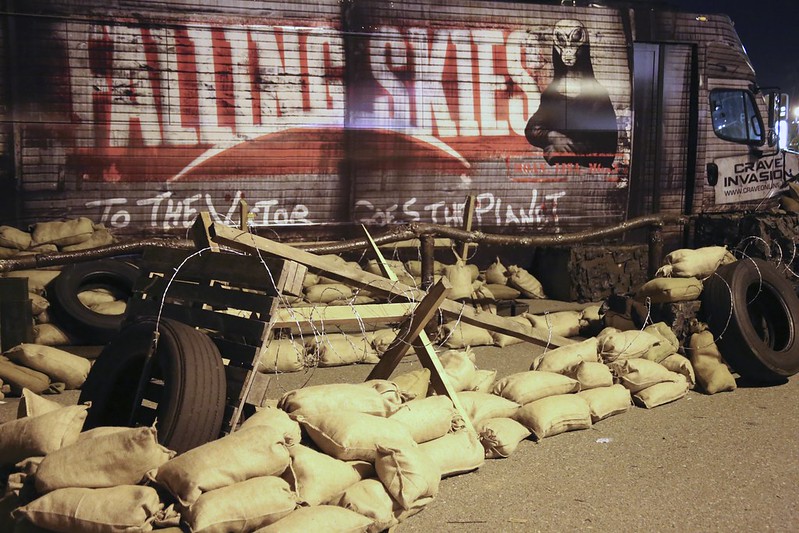 Wandering around for a bit longer around the Gaslamp Quarter we eventually stopped at a place for food. We had to show our ID on the way in as it was a bar, but after the others had ordered drinks they decided to tell us they’d stopped serving food. Eventually we moved on to another place where we got a slice of pizza though they were running short on what was available as it was close to midnight. I ended up ordering a Margarita Pizza, which wasn’t too bad, but I’d had better. 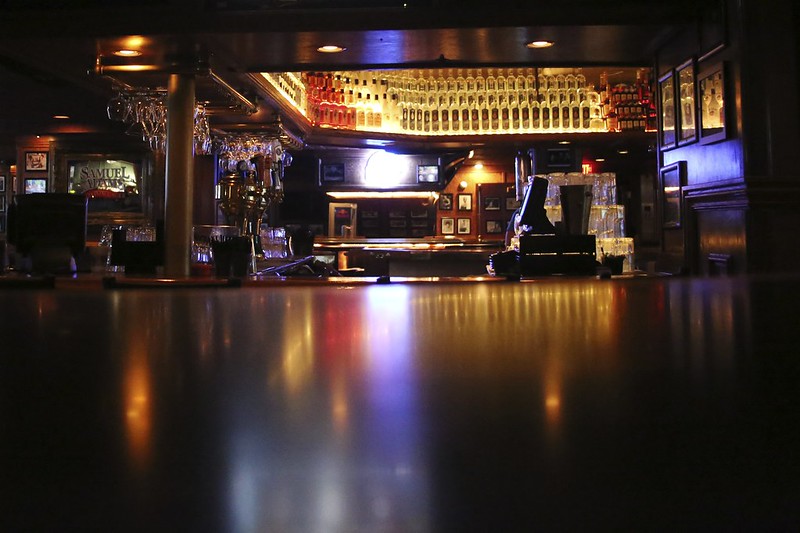 By the time we’d settled back into the hostel it was gone midnight and the other three occupants of the room had arrived as well – all of whom had been to the SDCC preview night. I’d not stayed in a hostel before, but I could see how it could add to the social experience of Comic Con; though for this night I got some ear plugs so I could shut it all out and finally after 57 hours could get some sleep.