Whilst I was away in East Africa the University of Leicester (which is the University I went to and is located in my hometown) announced that the skeleton they had unearthed in one of their trenches sunk into the car park at Greyfriars in Leicester was indeed that of King Richard III, the last of the Plantagenet dynasty. This was determined by comparing the mitochondrial DNA to a descendant of Anne of York, Richard’s sister. 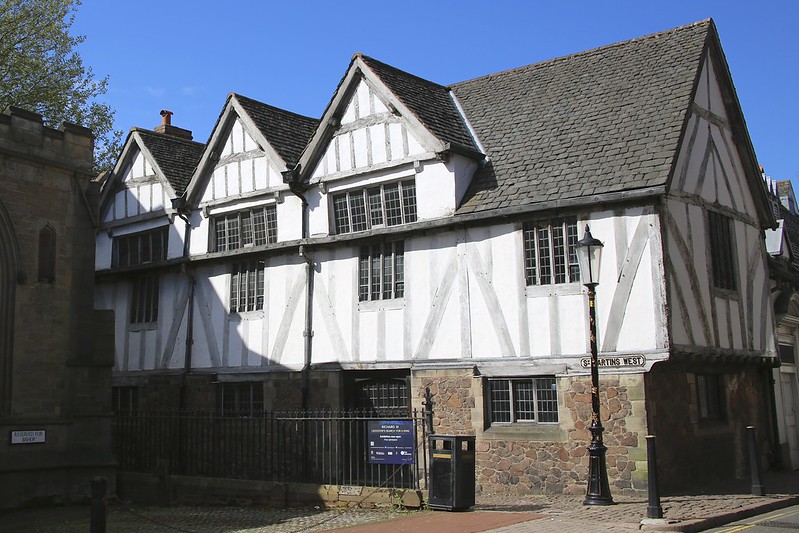 Within weeks of this announcement they set up an exhibition in the Guild Hall of Leicester with plans to have him buried in the cathedral, St. Martin’s Cathedral Church of Leicester, which is situated just next door. Around the time that the extensive DNA testing was taking place to confirm the identity of the body they also took a 3D scan of the print and did two things – they first produced a 3D print-out of the skull and then employed an expert in facial reconstruction to estimate what the person would have looked like by adding muscles, fat, and eventually skin-like structures to the skull into it resembled a person. 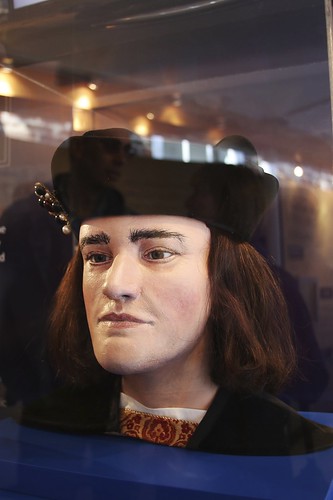 This facial reconstruction was also made part of the exhibition and was still on display months later when I finally got chance to visit.

The Guild Hall opens at 10:00 during school holidays so figured it would be a good idea to get there early in case there were queues. Fortunately we were the first in the line and didn’t have to wait too long.

The exhibition is quite short, and the very first thing you see is the facial reconstruction of the fallen King (other than a couple of informational boards). Though a couple of days after we visited it was due to be leaving on a tour of the country, starting with Bosworth Battlefield – the place where this King fell at the end of the War of the Roses. 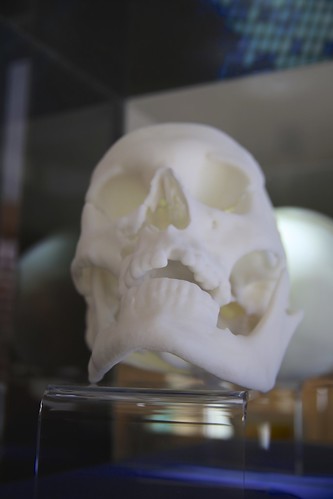 For those not familiar with Richard Plantagenet’s history, he was short-lived in the role of King after the death of his brother Edward IV. Rather than Edward’s 12-year old son take the throne this was taken away by the former King’s marriage being declared invalid, therefore making what would have been Edward V illegitimate. This then ties in with the stories of the Tower of London’s Prince’s Tower where it is rumoured his nephews were murdered.

During the rebellion that followed he went to battle with Henry Tudor (who later became King and the first of the Tudor dynasty) and was later killed in Bosworth – the last King to die in battle, and one of the few to do so in England.

During the battle some of his skull was sliced away along with other wounds, both of which could be seen on the skeleton found under Greyfriars. After his death his hands were bound and carried to Greyfriars where he was buried without ceremony, and based on the evidence appears to have just been thrown into a hole in the ground without any recognition – the reason his remains were lost for so long. 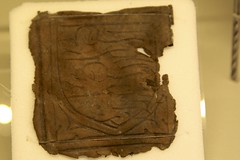 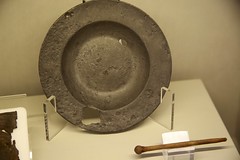 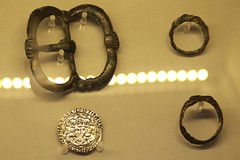 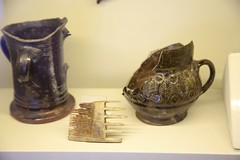 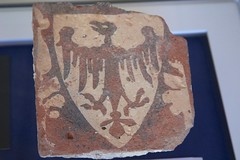 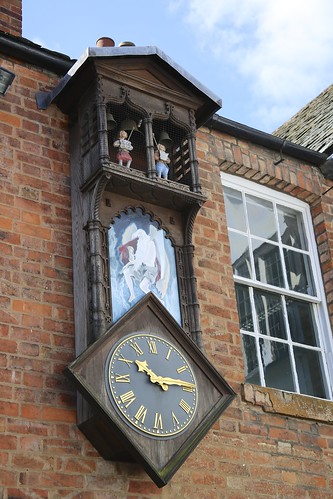 Once we’d finished looking around the exhibition and reading about the excavation via the interactive display of the King’s bones, we moved on to look around the rest of the Guild Hall as despite living in Leicester I’ve never actually looked around it.

Across the courtyard is the entrance to a chamber and the Great Hall. At the time we were there is was filled with chairs as apparently the Guildhall was going to be used for a wedding that day.

From the Great Hall we took the stairs from the rear up to where there was a bedroom and then another room with old chests and other old furniture. It reminded me a little of the other Guildhall I’d seen before in Coventry. 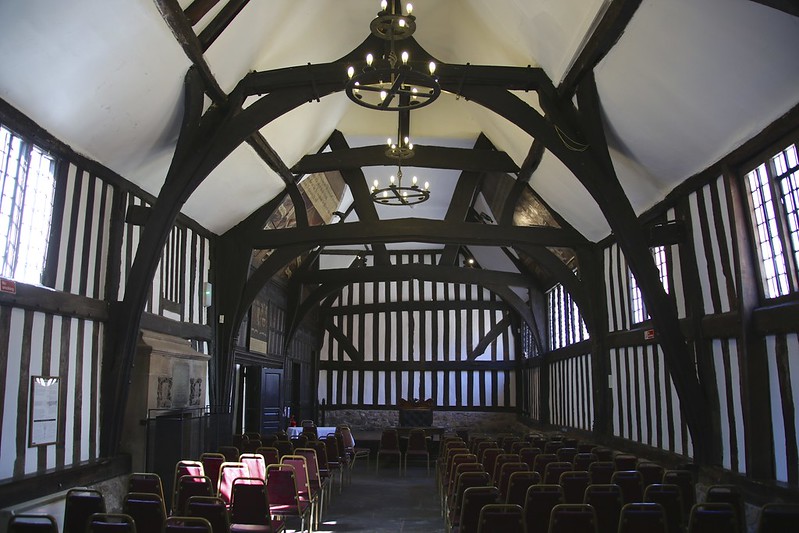 Next to this is then a library with a relatively small number of books – I’m sure I’ve got more books than them at home, but none as old as these. From there it is then a short staircase back down into the courtyard. We walked from there through the next archway into the cells. There were a few cells that you could look in, and also a torture device known as a Gibbet. 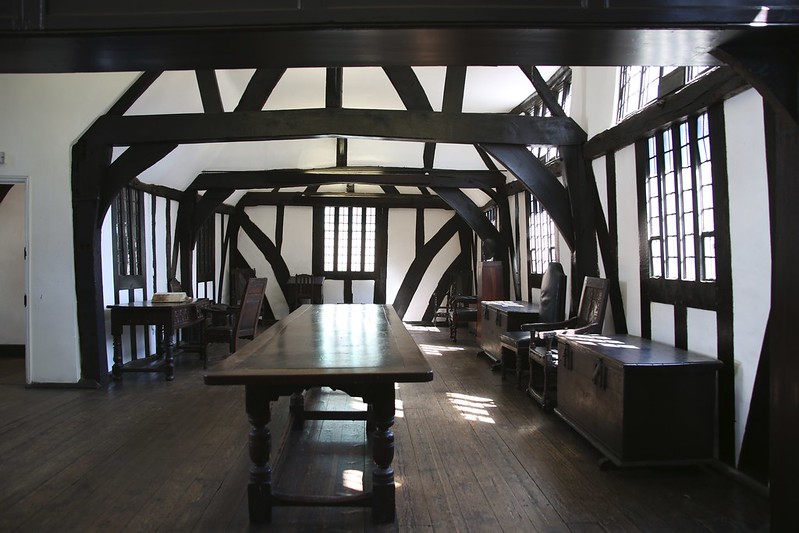 There isn’t really that much to see in the cells so we wandered back out into the courtyard and had a look at some of the pieces they have there. On one of the exterior walls is a massive clock known as the “Leicester Automation Clock”. It is a replica built from parts of the original and extensive notes that were available describing the original. There is also an old water fountain dating from around 1922 which is sculpted to look like Æthelflæd (Ethelfleda), the daughter of Alfred the Great and defender of Mercia. In 918AD, Æthelflæd had repelled the Danes from Leicester, hence her importance here. 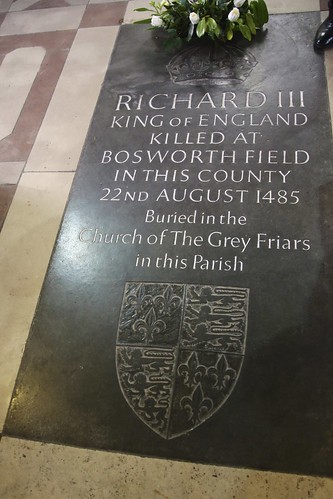 It was then time to go over to the St. Martin’s Cathedral Church. A few years previous the King Richard III society had paid for a memorial slab to be placed near the altar in the cathedral, one which describes his final resting place as being nearby in the Greyfriars church.

This was the first time I’d been in Leicester’s cathedral as well – surprising considering how many I’d visited to photograph. This one is a little unusual as far as cathedrals go, and that is because it was built as a church and later became a cathedral. It also has no pews for people to sit at.

As part of the King Richard III they have a person standing at the memorial stone who will talk about the King to anyone who wants to listen. 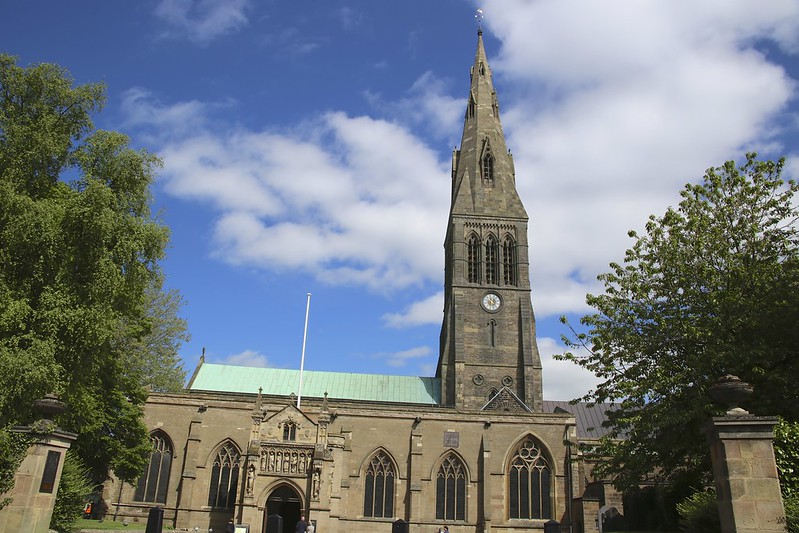 We didn’t stay there long though as we knew that there would be a talk at the dig site every half hour, on the half hour. So we left the cathedral behind us, taking a few exterior photographs as we went and walked over the road to New Street. From the outside you’d never be able to tell that behind the green gates was the burial place of a King. As Leicester City Council will be expanding the King Richard III exhibition to include the burial site at Greyfriars they have left a tent over the part of the carpark where the open trench from the archaeological excavation remains open. 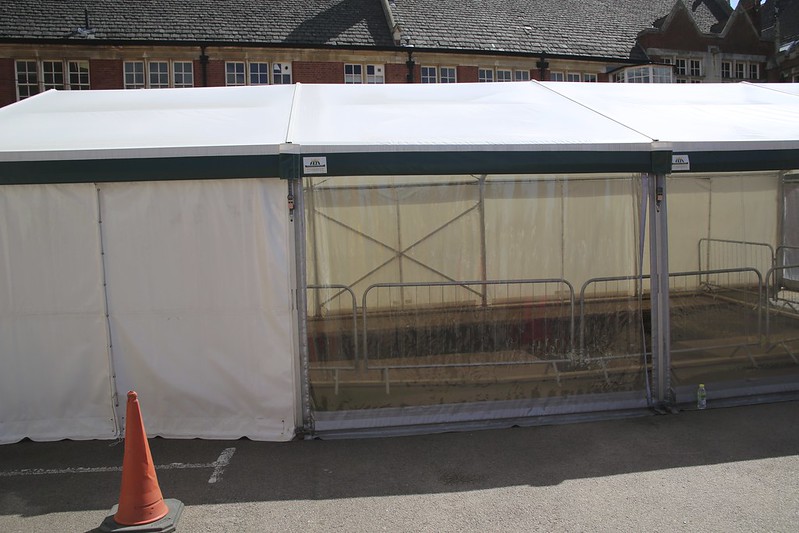 The first trench they dug just happens to have been the area where they found the bones of King Richard III and will soon have more permanent protection rather than just the tent. It seems the rest of the car park will remain used by the Council as the other two trenches where they uncovered parts of the Greyfriars building have now been filled in and parking spaces painted back in. 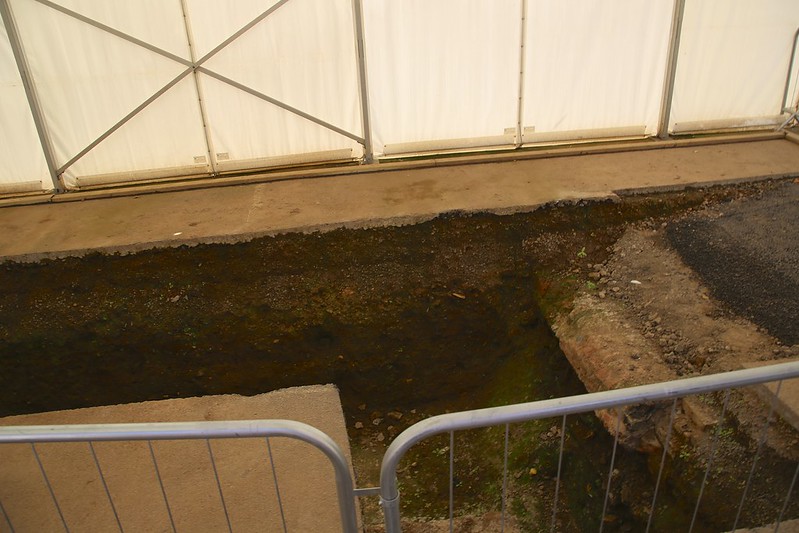 This then brought our tour of King Richard III sites to an end at the same spot the King was once buried. It is expected that the final resting place of the controversial Richard Plantagenet will eventually be inside the cathedral in Leicester.