"In the grim darkness of the 41st millennium, there is only war…"

Once again the Scions of Pluto were deployed into conflict. In previous battles they lost against Adeptus Mechanicus and Death Guard Forces, won against them on their second skirmish, and then narrowly lost in their most recent battle against the Death Guard. This time they were defending a primitive world, with Alpha Century dropping in to destroy crucial objectives and spread their mechanical ways.

As luck would have it, most of the Adeptus Mechanicus forces deployed in a single sector - the least defended of them. The majority of the Ultramarine forces readied their weapons for combat, whilst Sgt. Magnus Marcellus moved into position half-way between two objectives. He was hoping his presence there would lend some support to Lucis Sulla, a Reiver. Meanwhilst, the unnamed scout charged Delpha-0.4343, a Sicarian Infiltrator. 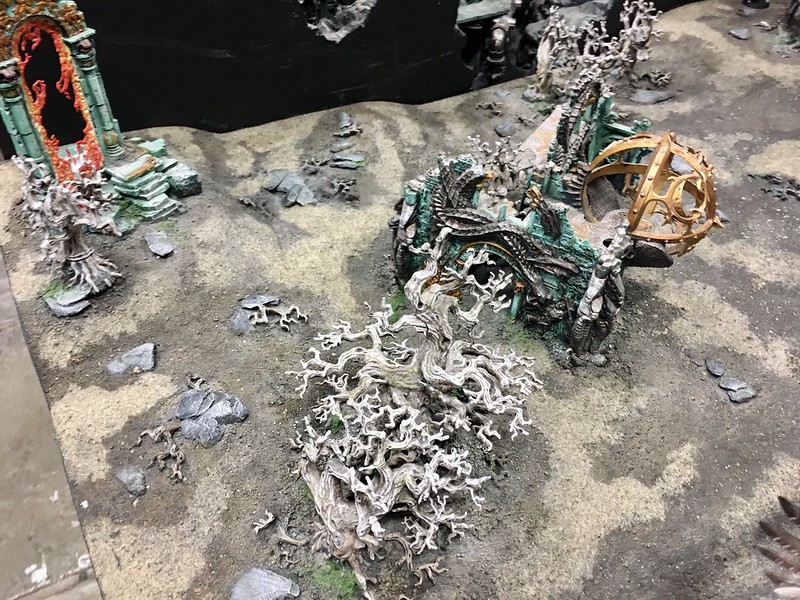 Alpha Century were quick off the mark with a decisive shot, and Actus-110 sniped at Occius Oranius, and killed him outright. This was an early victory point for the Adeptus Mechanicus forces. Although the battlefield was small and with a shortage of cover, the Scions of Pluto had already lost their range. In retaliation for his fallen brother, Commodus Tarentus fired an overcharged plasma rifle at Xor-XXVII; but could only wound him. Another Skitarii Ranger, armed with a Galvanic rifle and Omnispex then took a turn to shoot; but missed his target. Cassius Nerius didn't fare much better, shooting at Ix-99 he missed. It seemed the shots were getting worse; but then Xor-XXVII fired at Commodus Tarentus, and killed him: earning them another victory point.

At last it was the turn of Sgt. Magnus Marcellus, and he inflicted a flesh wound on Rho-575. The Scions of Pluto just couldn't kill the Alpha Century with saving re-rolls, and radiation affecting leadership and toughness. Rho-575 then shot back at Magnus; but missed. Ix-99 shot at Cassius; but fortunately this Reiver was able to roll and save himself from the shot.

Two of Alpha Century's number who has charged Lucius then began their melee combat. The first one was able to inflict a wound, and then the second one inflicted another wound, killing Lucius as a result. To end this first blood bath of a round, the Alpha Century successfully destroyed their first objective for another 2 victory points.

In the second round all of the Scions of Pluto readied their guns - they wanted to be ready for another onslaught. Magnus was charged by another two from Alpha Century which meant he was out of the shooting battle. Actus-110 took a shot at Cassius, and wounded him; whilst Cassius was shooting Ix-99 who in turn was able to save himself. Things were already looking bad for the Scions, even though the other Skitarii ranger shooting Cassius was unable to wound him, nor could Rho-575.

Varius Chronus, one of the weakest units in play, shot at Ix-99 and was able to inflict a wound. However the celebration didn't last long as Ix-99 shot back at Chronus and wounded him in return.

Kor-97/mk24, one of the two who had charged Magnus, tried to fight; but missed. The other made an attempt; but Magnus dodged the blow. Magnus, being proficient in close-combat had four attacks on Kor-97; but all were saved. Across the battlefield another close-combat fight was taking place, and Sygex-7 killed the unnamed scout. Morale amongst the Ultramarines was low; but they were not yet broken.

In the third round the Adeptus Mechanicus were finally able to take the iniative to move first. IX-99 charged Chronus, and Cassius in turn charged Ix-99 to lend some support to his comrade. The Scions of Pluto used their first command points to take a decisive strike, which allowed Cassius to fight Ix-99 first, and inflicted a flesh wound. Ix-99, having charged Chronus, tries to attack him; but misses. Magnus then made another attempt at attacking Kor-97; but once again failed to do anything more than inflict a flesh wound. The radiation saturation was not helping. Kor-97 then used his pistol to strike back at Magnus; but even at that close range he missed.

The Scions of Pluto still had three units left in the battle; but their morale was broken. With four of their brothers out of action, and the leadership of effects of Kor-97 on on the rest; it meant not one of them could pass their nerve tests after Magnus became shaken. The Ultramarines must have been shellshocked though, as they forgot they could reattempt their failed nerve tests.

The fourth round could only be a blood bath with the entire Ultramarine force unable to act against the invading force. It started with another of the Alpha Century charging Cassius, and Xor-XXVII charging Magnus. With all units now in close combat, no shots were fired. With all units shaken, it was impossible for any of them to become unshaken - this allowed Alpha Century to do whatever they needed to secure victory as they destroyed another objective. The battle was over, and Roboute Guilliman would have been ashamed of his Scions; but Alpha Century were intact, an almost flawless victory with nothing but flesh wounds inflicted. It was an impressive feat.