I've not had much luck racing half marathons. In October 2015 I set a PB of a little under 91 minutes, and since then I've not been able to race that pace again. In the winter of 2015/6 I trained hard and was able to get my 10 mile time down enough to believe I could do a sub-90 time, maybe even sub-89. With this in mind I booked to do Coventry Half Marathon at the last minute, but for the first time in years got flu - I don't mean a bad cold, I mean actual flu which leaves you barely able to move from the energy it saps from you. Needless to say, I couldn't race. A few days later I was starting to recover so decided that I'd enter the Milton Keynes Half for the first time, hoping that I'd recover enough in time to get a decent time. I didn't.

Fast forward a few months and I entered the Shrewsbury Half, though this time found it to be a slow and painful race due to an ankle injury I'd sustained in Russia. By the time I had another go at the Leicester Half Marathon I'd still not fully recovered. As my next half I decided to have another go at entering Coventry. This time I made it there, but it was a day with winds so strong that a pacer got blown over, and they were having difficulties keeping the cones up. It didn't go to plan, so I entered the Robin Hood Half for later in the year. This time the wind wasn't too bad, but the weather was unusually warm for that time of year and that combined with it being difficult to get water meant I just couldn't push as hard as I felt I should have been able to - even though just a few weeks previous I'd set a new 10 mile PB that gave me the potential for sub-88 time.

Okay, maybe I don't respond well to strong wind or heat - so I figured that booking a winter half marathon to finish the year on would be a good idea. Surely nothing could go wrong with that? Wrong! The downside to having a winter race is that it can be cancelled or delayed due to bad weather - in this case heavy snowfall and icy roads meant it had to be postponed until the following February. Unfortunately this put it into the wrong point of training when I'd be working on building up the miles ready for the Manchester Marathon, not at a time I'd be working on pace.

I decided the best thing for me to do would be to treat this as a training run. I'd lost some speed over the winter anyway so wouldn't quite be ready. I did however need to work on building speed back up ready for Manchester as my training runs thus far had been slower than target pace. Doing a steady run of around 07:00/mi seemed like a good target for today. My good friend, @miss_gen, suggested I do a few at 6:40/mi and see how it goes.

I got to Willen Park an hour before the race, and met up with @joannasbarlow and had a quick chat before she joined the queue. I also got to meet @BigCarlRunning briefly, but he seemed busy. I stood around waiting for the race to start and eventually found a place to stand waiting for the start. I was far enough back that I thought I'd be in about the right place for the pace I intended to run at. I noticed I was a few people in front of the sub-90 pacer, which wasn't intentional… I figured he'd quickly overtake though as I was told he wasn't very accurate and got an 85 minute time last time. 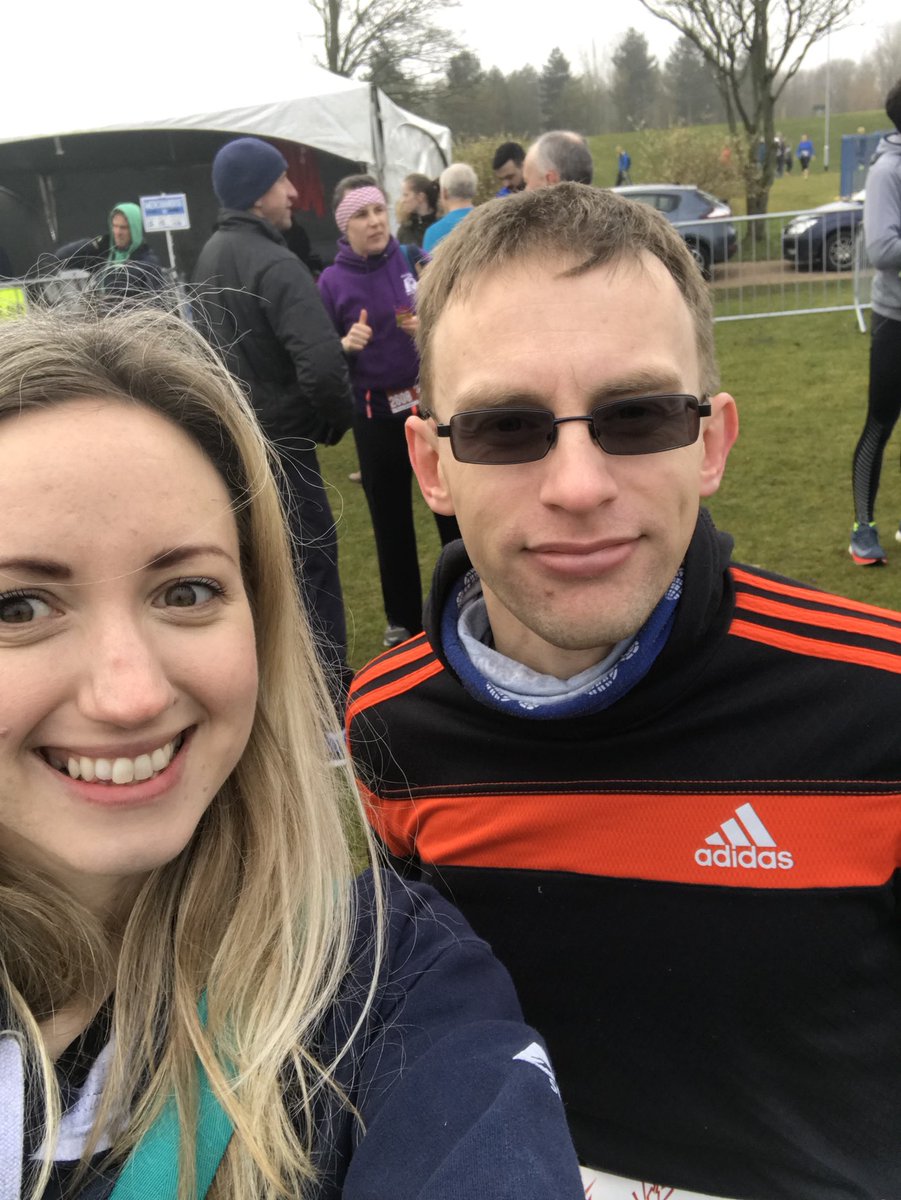 There were signs for the race on various walls, and they included the phrase "last race before Christmas". I hoped not, things would need to go seriously wrong if that was true.

Early on in the race there were some low posts sticking out of the ground that we had to be careful of - it was that crowded it would have been easy to miss them and so some volunteers were shouting out warnings to people as we reached them. These first three miles passed by quickly, in fact they passed by too quickly as the split timer indicated I'd done it in 19:21 at an average pace of 6:27/mi. That was a mistake.

Just after passing the three mile point I started to get a stitch. I tried to run with it for as long as I could but it was feeling more and more uncomfortable. I'd had the same last time I'd ran in Milton Keynes and is the only other time I've had it in a race - at least this early on. Having only covered 5K, I started to walk. This wasn't the plan at all - I'd been going too fast, and now I wasn't even running.

It started to ease off so I started to run again and soon caught up with those I'd been running just behind earlier. This walking break had only lost me around 10 seconds. I could make them back later if I wanted to - I still had what Gen said in the back of my mind.

The path we were taking was entirely hard surface. We crossed bridges over canals frequently, and for the most part these were the hills we faced. Nothing too bad at all really. Though saying this, there were some hills that seemed to really drag on, and I think these may be the points where I walked later in the race. At mile 6 I walked briefly for the second time - I'd just done another 3 miles in 19:32 and was ahead of schedule. I'd only lost ten seconds from walking, despite both walking breaks being in this split. If I carried on like this I realised I'd be on target for around 86 minutes. Impossible. I know I'm not yet capable of that and so my legs would likely explode before then. I could probably hold it for 10 miles as I have more or less done that in training, but I knew even if I pushed for it I'd lose it in the last three miles. That wasn't to be the case though - my legs had been given the opportunity to rest which meant mentally it'd now be very difficult to not let them rest again and again.

Over the next three miles my average pace dropped considerably, though I'd only been overtaken by the one person. Everytime I took a walking break I made an effort to catch up with whoever I was running behind before even if it took a mile to get back there. I was now four minutes slower than my previous two splits - my mind had pretty much switched off and I was forgetting to fuel like I'd intended. At this race the water stations are at miles 3, 6, 9, and 12. I'd grabbed a cup and took the smallest of sips at mile 6, but didn't think about taking on more fluids at mile 9. It would probably have been a good idea as the sun was now shining, and the weather warming up. I really shouldn't have kept my hoodie on.

The tenth mile was my hardest mile in the race - I'm not entirely sure why but I walked for a good portion of this. I think partly it's because this is where the long dragging hill was that I mentioned earlier. If I do this race again I need to get to this point remaining focused, and perhaps then I can tackle it better. It did however lead into my fastest mile of the race as we neared Ouzel Valley Park. This mile is mostly down hill so it was literally no problem to just leave the legs on auto-pilot and let them hit whatever speed they naturally wanted to run at. With this descent it meant we were now on the homeward stretch - every step would be a step closer to the finish.

I did some quick maths in my head and realised (incorrectly) that it was no longer possible to get sub-90 so I didn't feel the need to starting pushing. I eased off, or at least thought I had, and walked whenever I wanted. Which was quite frequently as it happened. I was sure I hadn't seen the sub-90 pacer pass me though as I knew they were all wearing the red event t-shirts.

The last mile felt slow, and I felt it wouldn't have been too much of a problem pushing harder. I didn't, that wasn't the goal, and if I wasn't going to get sub-90 I didn't see the point this time. Taking it easier would avoid impacting my training runs over the next week. I was however going faster than I thought. Even when the downhill sections turned to hills I kept a fairly steady level of effort - letting the terrain cause most of the changes in speed instead. That is until I saw the knee high posts in the floor and realised I was very close to the finish. I couldn't remember how far away the finish was, so wasn't really sure if it was worth picking up the pace or not. Instead I left it until the finish was right in front of me. I saw the time tick from 01:29:00 to 01:30:00… that was it. I'd unintentionally come close to getting that elusive sub-90, yet not committing myself to it meant I watched as it slipped away. I felt there was no point in speeding up too much as it wouldn't achieve anything… I just felt it'd be nice to let myself run faster for a few seconds.

As I crossed the line I realised the timer indicated I'd gone over by ten seconds. It wasn't a bad time, yet being so close to that goal again left me with some regret. I should have listened to Gen - she's the expert runner who can run these distances far faster than I can. When I got home I looked up the official results and realised my official time was 90:02. I'd been THREE seconds off achieving a three year dream. It was a mistake, but perhaps if training goes well over the weeks to follow I can risk racing Reading Half Marathon properly, and put everything into that one race without it affecting Manchester.

This official time put me in position 94 of 1,636 finishers (first 6%). One interesting thing that ResultsBase shows is that when taking age into account, at age 21-29 I might have got 1:29:41 - what a tease they are! I enjoyed this race enough to be considering doing this one again in December - I'd like to see if I can get that sub-90 there when I'm really pushing, or if pushing hard just makes me slower overall. Only time will tell…