Breakfast here was similar to the previous hotel in Marrakech at the start of the adventure, though here they’ll cook omelettes and such after 07:00. I’d already finished by this time though. 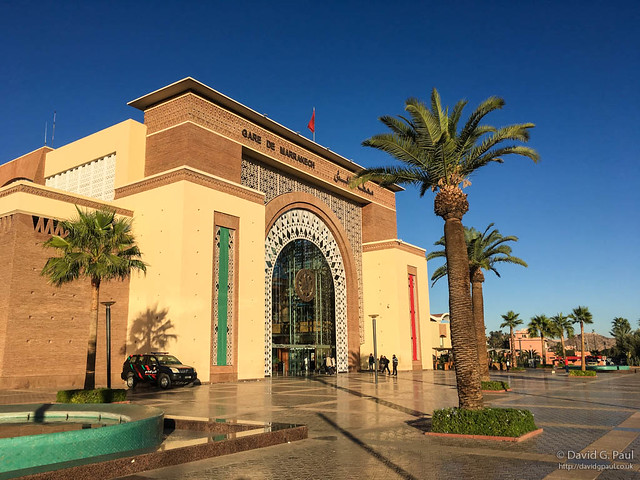 At the train station there is a large departures board, and that combined with my ticket indicated where I needed to go. To be sure I asked before boarding, and then found compartment two on the first class carriage. With these trains the seats are also assigned numbers so you know exactly where to sit. The others in the compartment didn’t speak English, so I decided the journey would be spent between reading and looking out the window.

Trains in Morocco are far cheaper than in the UK, and I’d argue that they’re just as nice if not better. If anything they’re more spacious. Each compartment in first class has just six seats, and mine was at the window with a table.

Once the train had left the city of Marrakech behind, a few minutes behind schedule, it was mostly a barren landscape. Occasionally there was a small settlement that could be seen in the distance, a sign of plant life, or even a shepherd. Mostly there was nothing.

Along the way there were a few stops; including in Casablanca. The closer the train got to the city, the more litter that could be seen dumped on the sides. It looked very different to Marrakech. It looked newer, and more European. That is until you get to the sea where it’s more industrialised.

If I’d stopped in Casablanca like I’d considered then I can’t see me having needed more than thirty minutes to see the mosque before being ready to leave again. It was the right decision to not stop there.

As the train left Casablanca I had my lunch, though found the cheese I’d bought from the supermarket to be nowhere near as nice as what we’d had at the Kasbah. The journey from then on was in constant sight of the sea, and civilisation.

The train arrived in Rabat a few minutes late. With the journey taking close to five hours, a few minutes late is nothing really. Those staying on the train would have a much longer journey ahead of them to Fez – the former capital.

Immediately it was obvious that Rabat is as different to Marrakech, as Marrakech is to Imlil. Where Marrakech has some character from the old buildings and the winding souqs of the medina, Rabat feels like a western city. It has a tram system and busy roads. It could easily be a large city in France. 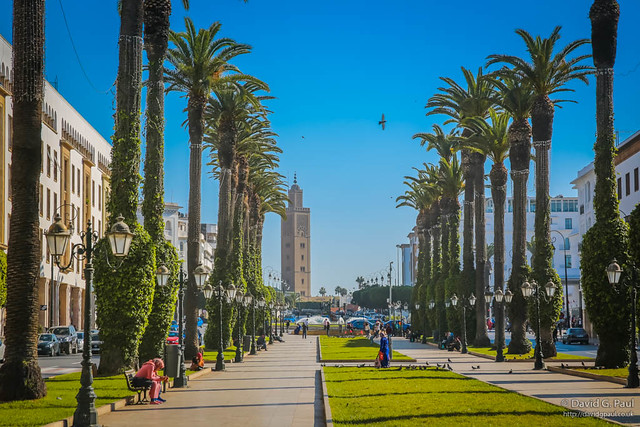 From the main road I found the medina quite quickly, and then navigated my way through its alleyways. Here it was cleaner, it seemed newer, and none of the sellers I passed were being pushy. I noticed some people here wearing a red fez, something I’d not seen in Marrakech, though I suspect here it’s due to the proximity to the city of the same name. 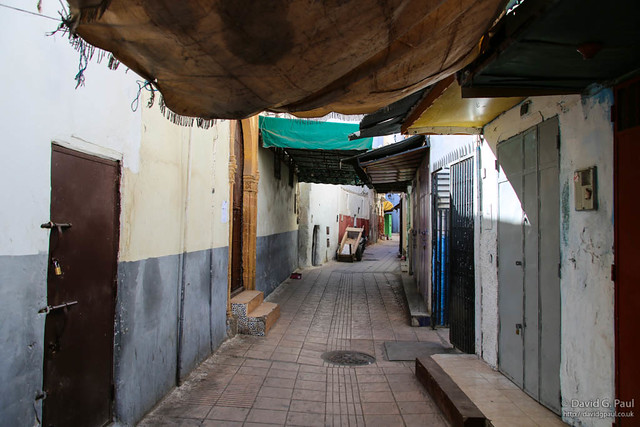 When I found the Riad I was staying at, I knocked and a Moroccan lady answered the door. She’d been cleaning the floor, but paused to check me in and get me to fill in the paperwork. Once I’d done that she shown me to my room and then disappeared.

The room had large wooden doors that looked ancient, and had big bolts to use when locking up. The ceiling was even higher with wooden slats, and a small alcove between the roof and the door. The window had a mosaic either side of it, with windows that could open but were protected by an iron grill. This combined with the only curtains in the room being ones tied back either side of the door created an image of Arabian majesty. You could imagine hundreds of years ago someone relaxing on cushions, smoking a hookah pipe.

I dropped my bags off, and took what I’d need for a day of sightseeing. When I came to put the padlock on the door I found that with it on, the door would still open! I went downstairs to ask what to do about it, and the French proprietor had arrived. He demonstrated to me the correct way to lock the door, so I thanked him and left.

I made my way back to the main road that passes the train station and found the Assouna mosque. I photographed that, and then began looking for the entrance to the royal palace grounds. I walked west, and photographed the gate known as Bab Rouah before turning back. I then walked south until I spotted Chellah and decided to visit that first. 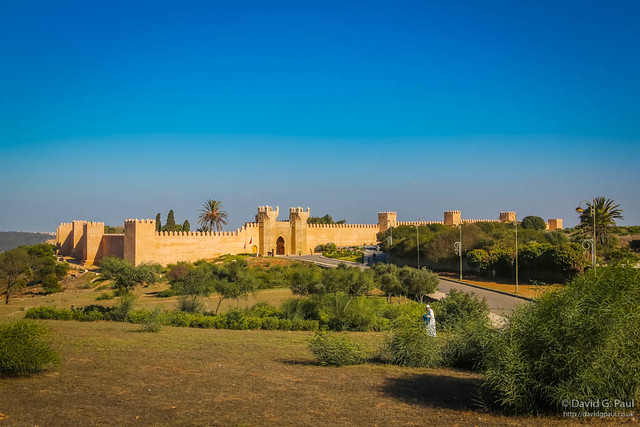 From the outside, Chellah looks like a castle; but it started life as a small settlement called Sala. When the Roman Empire arrived they transformed the area and built walls – ruins from this time can be found all over the interior of this site.

In the 7th century the Muslim Arabs took control of the city that was mostly in ruins. After this time the mosque was built, but little more than the minaret now remains. The rest of what became the necropolis contains various ruins, and also the grave of Abu al-Hassan; a Moroccan sultan of the Marinid dynasty who ruled before the Saadiens. He had died in the High Atlas Mountains after being exiled, but was buried here.

It cost 10 dirhams to enter, and after getting my ticket I turned and tripped over a cat. It was not happy. It seems Chellah is home to many stray cats, just like many parts of Marrakech’s medina.

The main thing to see here are the ruins, and these took me twenty to thirty minutes to get around. A large tour group of two coaches had arrived just behind me so I tried my best to stay ahead of them so I could try and get the photos as free of people as possible. 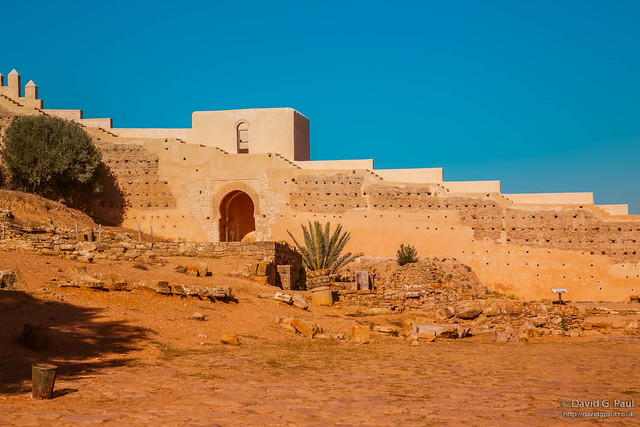 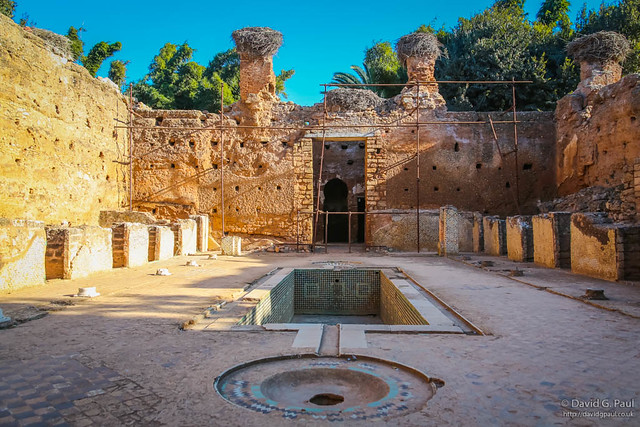 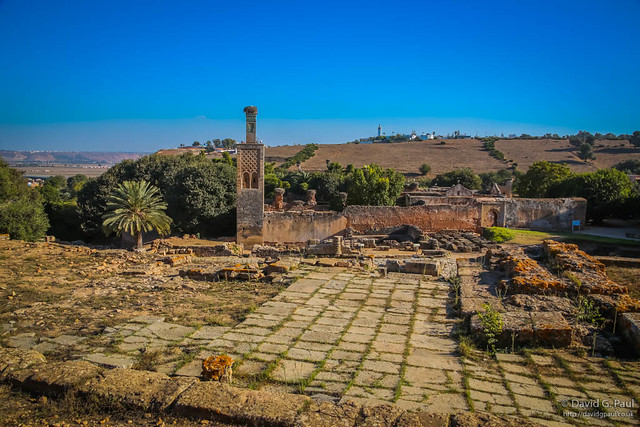 I don’t think the ruins are that good, but considering how cheap they are to visit I think they’re still worthwhile if you happen to be in Rabat. I was there just to tick off another capital rather than specifically to see anything. There are gardens too, but again they’re nothing special – at least at this time of year. The ones in Marrakech are bigger, and better.

The most intact part of these ruins is the minaret which as with many major landmarks in Morocco, has storks nesting atop it. These ones are closer though, and you could hear the clacking of their beaks.

Once finished I had another go at finding the entrance to the royal palace, but again couldn’t find it. I’d walked literal miles in looking for it, so finally decided to give up completely and try to visit the Hassan Tower before sunset.

It was quite a walk, and I could feel a week’s worth of walking in my legs. When I got there I found the entire complex is surrounded by a wall with its entrances protected by ceremonial soldiers on horseback. Amusingly the horses stand on a sand pit instead of on the brick floor – obviously to make it easier to clean up after them. 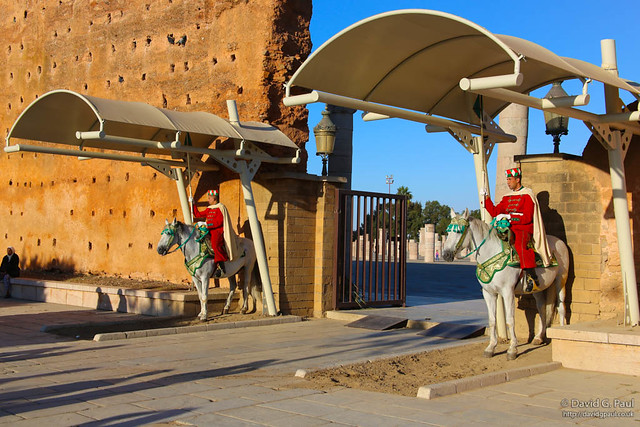 Inside there are many columns in the open air, and on the left is the Hassan Tower. This tower standing on it’s own may seem odd, but it was once to be the minaret of a large mosque with this tower being intended as the tallest in the Muslim world. It was never completed.

Sultan Abu Yusuf Yaqub al-Mansur commissioned this building, but after his death all work stopped. The tower itself had reached a height of forty-four metres, but was only half its intended height. It was this sultan who had converted Chellah into a necropolis, and had started reconstruction of the Kasbah of the Udayas. 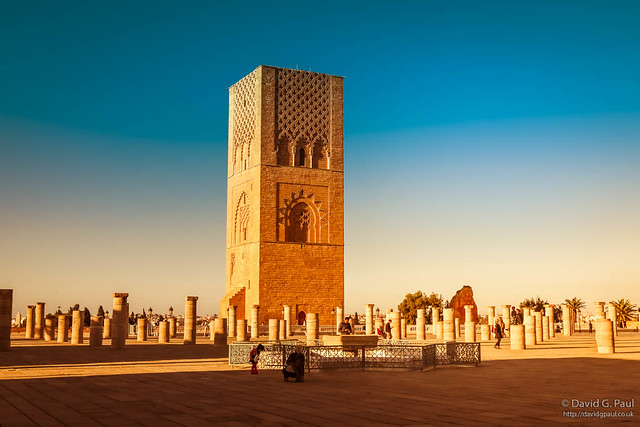 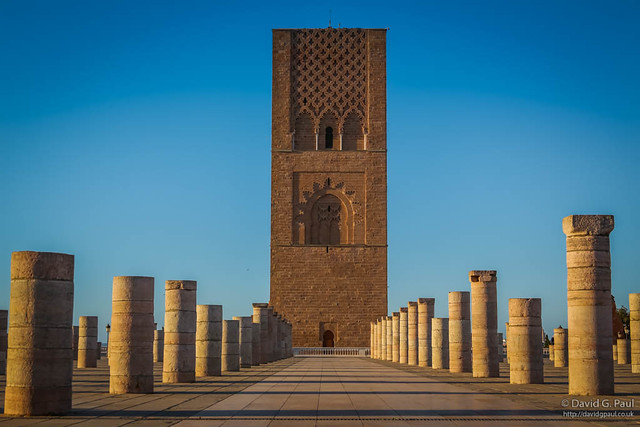 On the opposite end of this site is the Mausoleum of Mohammed V. This appears to be two buildings connected by a corridor, with one of the buildings open to the public. Between the tower and the mausoleum are many pillars, which themselves are ruins of the Rabat mosque.

During my time visiting, the tower was closed, but tourists were allowed to enter the mausoleum. Through the gates are some stairs that lead up to a viewing floor which can be entered on any of the four sides. On each side is a ceremonial guard, and a queue of people trying to get inside. 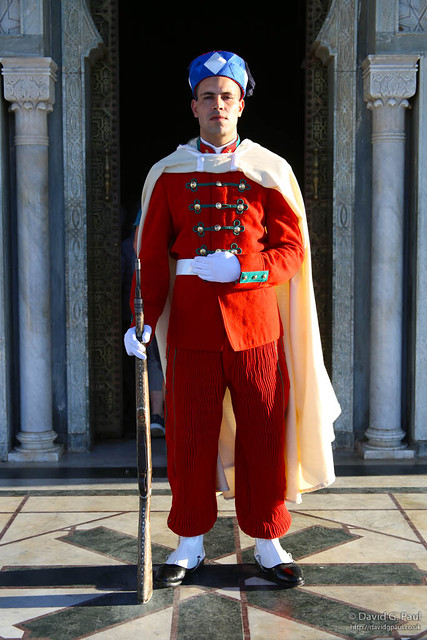 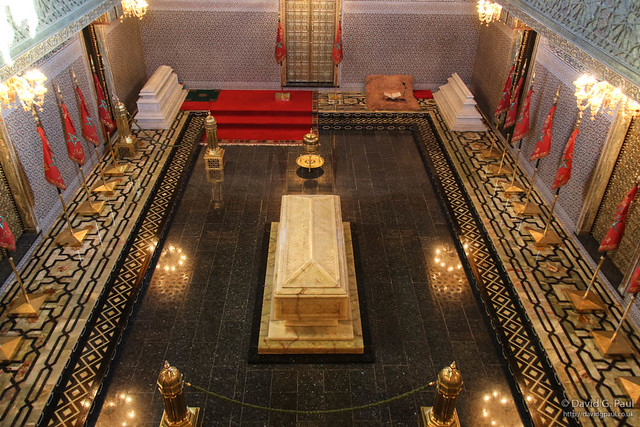 I’d now seen everything I could before sunset, so would only have the Kasbah of the Udayas left for the morning. I didn’t really know what to do, so thought I’d check my offline map to see what food places were about – perhaps there’d be somewhere to eat pizza in about an hour or two.

I found one about five kilometres away so decided to walk there to pass the time. Finding my way there wasn’t too difficult, even as the sun was setting. I noticed that the closer I got to the pizza place, the more western it felt. It could be because of the nearby university. 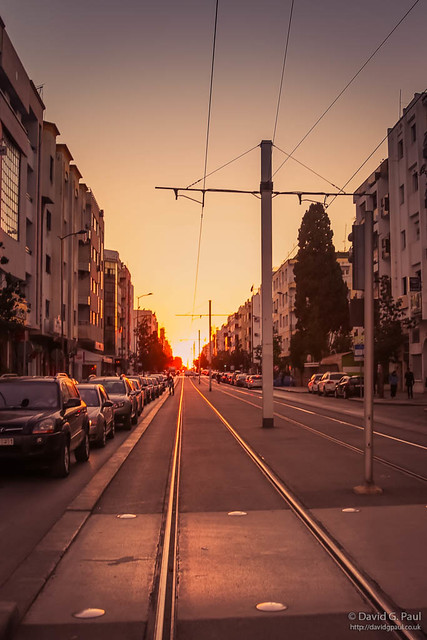 I ordered a Hawaiian pizza, and some cookie dough ice cream, along with a couple of drinks. This with a tip came to around 140 dirhams so was easily my most expensive meal of the entire trip – it was the equivalent of almost £30!

During the time it’d taken for me to eat, the sun had set and darkness had fallen over Rabat. The walk back to the medina was a lot quicker than the outward journey, and somehow I found my way back without use of a map.

Inside the medina was another story. For that I needed to use my map to find the Riad. It was a lot busier now – additional people were selling in the middle of the alleyways, and people were moving slowly either side of them. Once off the main alleyway it was darker, but still lit well enough to find my way back to the Riad where I could finally relax.