I slept better than any night before, but then I didn’t have much for breakfast as today was boiled eggs. Fortunately I’d got cereal bars with me so had one of those before packing my bags for the day. This journey would be the easiest one yet, or at least should be.

The sun was shining so a definite day for wearing sunscreen. To be honest it’s a requirement everyday in the mountains due to the altitude, but it’s something I managed to miss on the first day.

Today’s trek started off with a descent down to the river, and then a climb on road surface to a radio tower. It was a big difference after the trails we’d hiked across so far, but it wasn’t exactly tarmac. 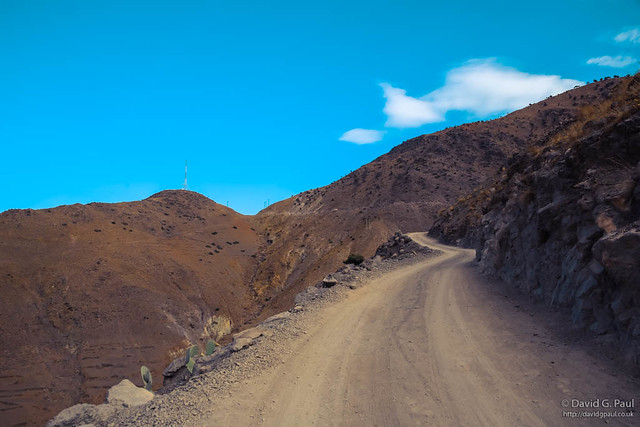 This first climb wasn’t that bad; it was for the most part easy. We passed another football pitch along the way, and for a time our guide was talking to a local who was walking in the same direction.

At the top, beyond the radio mast, we stopped to rest on the hillside until the mules caught up with us. The local that had been talking to Hassan climbed onto the top of a passing vehicle on the road which eventually leads to Imi Ourhlad.

Our descent was trailing the mules the entire way down. Whenever a mule tried to go the wrong way it was hit by a stick until it had diverted back onto the path. It can’t be a nice life being a beast of burden like this. They had carried our luggage and food supplies since Imlil, and in each case had arrived ahead of us.

I liked to think that one of them was named “Bill” after the pony in The Lord of the Rings. I could imagine what the long journey on foot from Rivendell to at least Moria must have been like in that fictional story. Without the peril of course, though you do have to watch your footing. 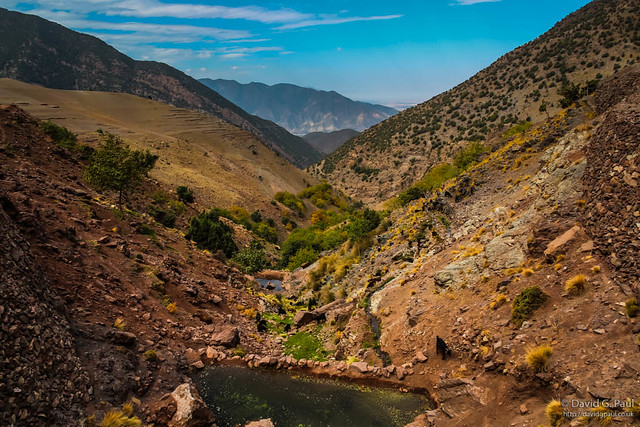 The sun was at full strength as we were approaching midday. It was hot, but I kept my hoodie on to protect my arms from the sun, and my cap to protect the back of my neck. Despite my best efforts I was already burnt.

Eventually the trail runs through the village of Imi Ourhlad where it runs along what appears to be a cross between a mostly dried up river, and their dumping ground. A lot of the initial buildings here were as red as the sand and were how I pictured older Moroccan buildings in my mind before the trip.

At midday we stopped at a shop for drinks, and relaxed there for an hour. I paid 30 dirhams towards the drinks which to be honest is very cheap. It was nice to be able to drink a Coca Cola for a change.

When we set off it felt warmer than before. We continued along the riverbed which was a putrid combination of rotten apples, donkey droppings, and water. When this reached a stream I jumped from rock to rock to avoid my feet getting wet, which is no small effort with a heavy backpack. 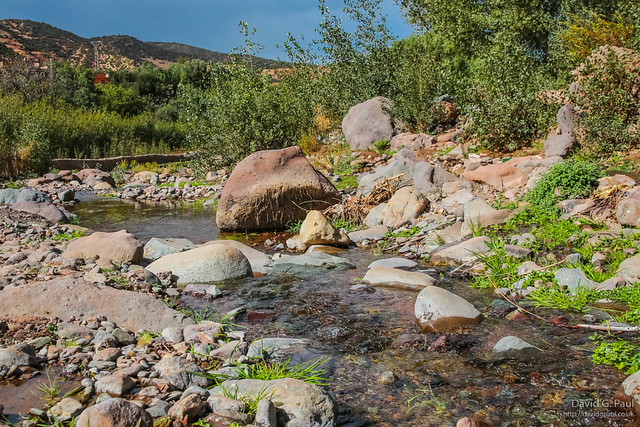 The climb then felt very hard. I felt far too warm and was struggling to concentrate. If I took my jumper off I’d cool down, but then my arms would be unprotected and the sunburn would get worse as I wasn’t convinced the factor fifty sunscreen was working.

I kept reminding myself that instead of keeping my head down, and concentrating on the climb that I needed to look up and take in the surroundings occasionally too. Behind me I could see the road in the valley, and plenty of cars using it. It had been a brief glimpse of civilisation before returning to the mountains.

After thirty minutes we reached the top, and from there most of us ran to Imska. It was a slow pace to start with, but once we hit the road I decided to run as fast as I dared to with my camera in my hand. It was nice to run from the downhill trail onto the road, and I managed to get Hassan to work hard to stay in front. I wondered how it would have been if I’d not got my camera and backpack on me – he probably had a lot more speed in him.

The gite in Imska was nicer than the last, though the facilities not as good. After arriving we sat on the terrace for tea, and then shortly after some lunch. The terrace here overlooked a valley where we could see another part of Imska on the other side. 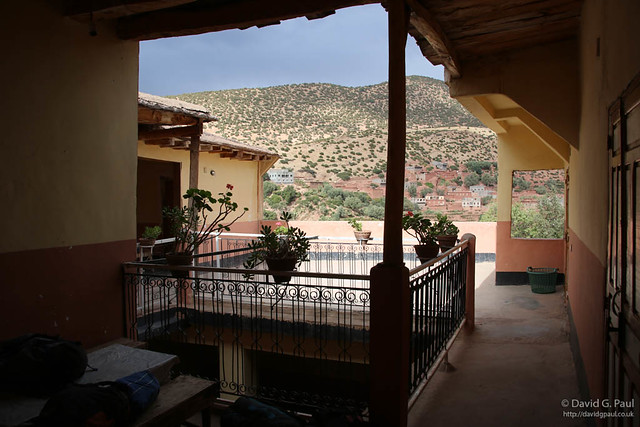 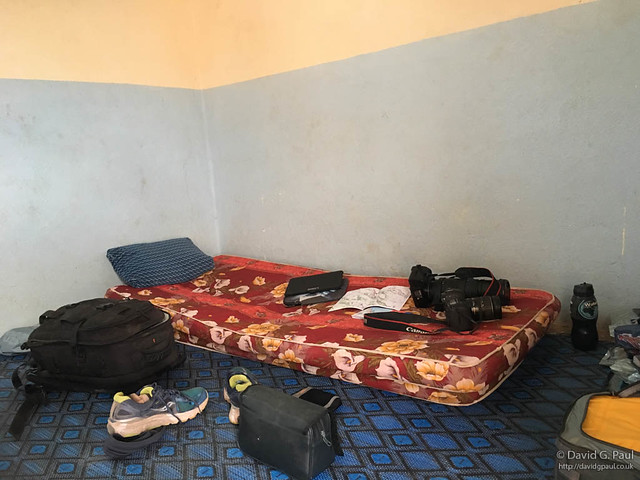 From this terrace we could see a green woodpecker, but it was gone before I could get my camera. Whilst waiting for our eventual village walk, I decided to take a shower. This wasn’t quite as bad as the last one, but instead of the hot water cutting out it was the cold water. It might scold, but somehow it doesn’t seem as bad.

The shower head was a little broken as it’d spray hot water out of the side in one direction, and cold water out of the other side. Nothing would spray through the actual nozzles. It’s a different sort of challenge, but I think the people there have bigger problems. 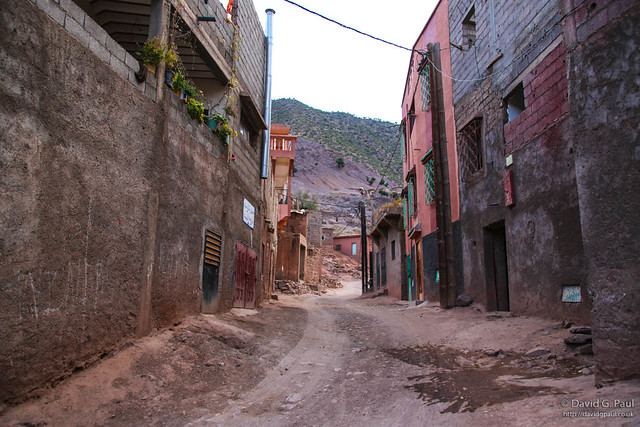 The remainder of the afternoon was spent talking with the guide, and convincing him that people had been to the moon. He’d never heard of Neil Armstrong or the Apollo program. It sounded laughable to him that people could leave this planet. I guess there is a limit to what information they can get there, and he’s not yet been able to afford a visa to go on holiday outside the country.

As dusk approached I went to see what the chef was cooking as I was sure I could smell chips, or as the Americans would call them – fries. My nose hadn’t deceived me – sure enough he was sitting their and frying potatoes using the equipment he’d been carrying on the back of the mule for the past few days. 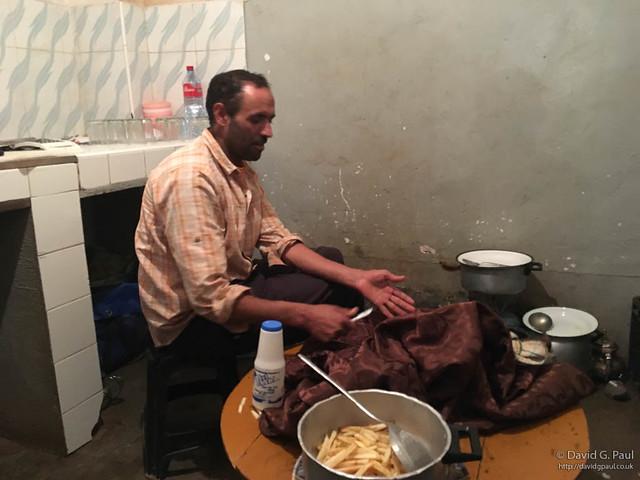 Later in the evening these were served with spaghetti and chicken to produce a very filling meal. It was certainly a surprise! We thanked them for the meal, and sat talking as a full group for one last time. In the morning the muleteer and the chef would be off on their own to drop our bags off at the Kasbah du Toubkal, and we wouldn’t be seeing them again.

I listened to the French being spoken and understood it, but didn’t feel confident enough to reply in French. Even though my Spanish is almost non-existent there were times when the first word that sprang to mind was Spanish instead of French, maybe because of my travels over the past few years; so perhaps English was for the best.

The night ended by finishing of the game of crib we’d started earlier in the day.