I got up at 06:30 for a shower and then started getting what I’d need for the day ready. It’d been a mostly sleepless night due to noise from someone in the room above until 02:30. Breakfast was a very basic continental style, though I suspected it may be the best breakfast for at least a few days. I decided it’d be best to eat lightly since we’d soon be running.

When getting ready, I realised I’d misjudged how much I could fit into my adventure pack, and struggled to fit everything into it. My only chance was to put the excess into a dry bag and hope it wouldn’t get left behind.

We left the hotel at 09:00 and began our journey south to Imlil. Once we’d left Marrakech behind us, the type of buildings changed considerably and in Asni you could see the reduction in prosperity. Before reaching the mountains we also saw camels alongside the road.

An article I’d read on the plane had described Imlil as being like Kathmandu. It’s not. It doesn’t have the same feeling of over-crowdedness, and doesn’t have backpackers at every turn. The village is situated in the Imlil valley, with a stream which made it remind me more of Aguas Calientes in Peru. 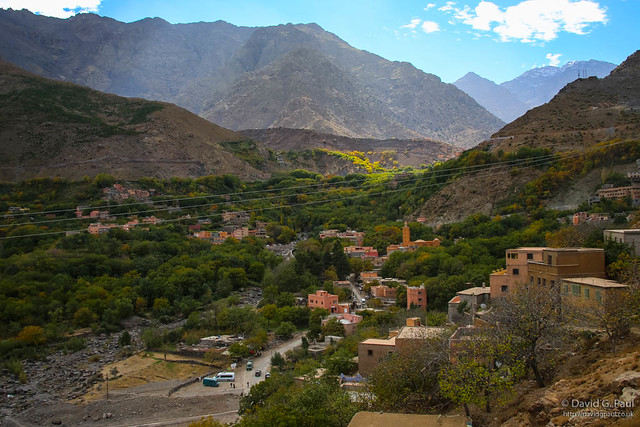 We met Hassan there who would be our guide for the next few days in the High Atlas Mountains. Our main luggage went with Lessem and Mohammad who were taking it by mule to a gite situated in another valley. Mohammad would be our chef for the week, and Lessem would be looking after the mules. These three would form our support crew for the adventure.

The path from Imlil winds as it slowly ascends to a pass between mountain peaks. When we started we were at 1,700 metres above sea level, and at the pass we’d be at 2,400 metres.

Along the way we stopped at Hassan’s house for twenty minutes to have some Berber tea – which contains mint and sugar. Served with this was a plate of mixed nuts. Hassan jokes that Berber tea is Berber whisky due to its colouration – it’s something the locals often refer to it as. 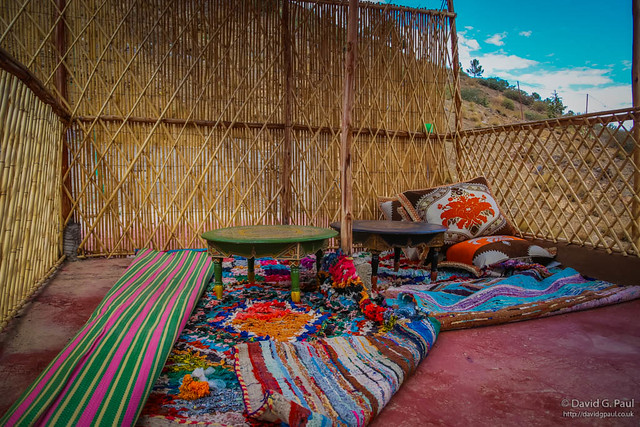 It’s name comes from the local populace of the High Atlas Mountains, the Berber. These are a people that are spread out across much of the northern countries of Africa, and their name is derived from the Egyptian word for outlander.

Whilst in the cities of Morocco they speak both Arabic and French, a lot of the Berber settlements in the mountains would predominantly speak Berber — of which Morocco has at least three variations of. Those that are lucky enough to go to school may later learn French. 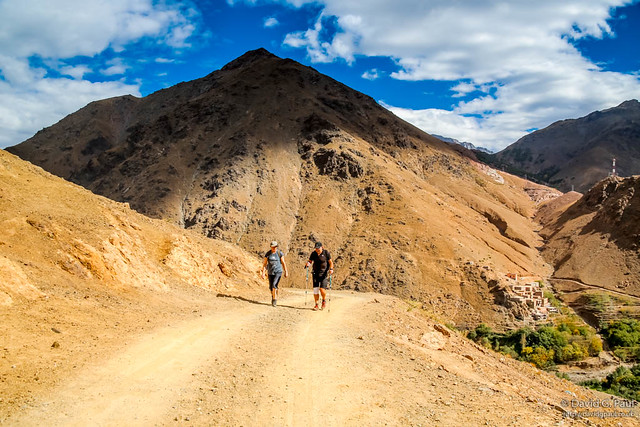 It was under 4.5 miles to reach the top at Tizi h’Mzik, but it took time due to the steepness and winding of the path. At the top they often serve lunch, but with the wind it meant they’d be serving it in the gite we’d be staying in later. Leaving it until later is actually better for the mules anyway as it means they don’t have to be unloaded.

I didn’t run much of it at all, only a few moments of the ascent. I stopped a few times for the others to catch up, and felt the heat of the sun beating down on me. 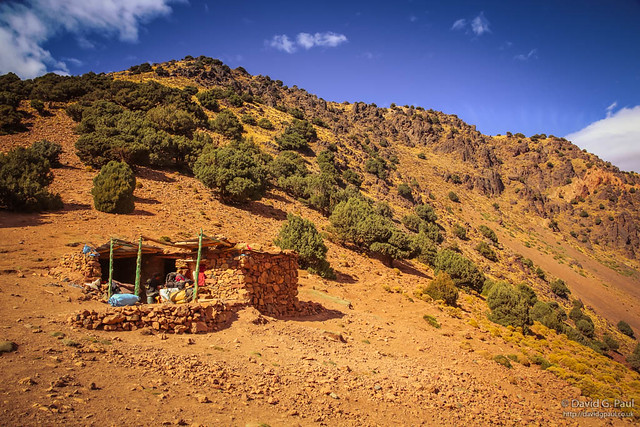 Whilst resting at the top I sat and had a flapjack and some water, and then set off with Hassan to run some of the remainder of the trail. The ground is loose and uneven, there are sharp turns, and many things to keep an eye out for. I was keeping one eye on the landscape to see what there was to photograph, so found myself stopping frequently when I spotted something.

I think without my camera backpack I’d have found this considerably easier, but I wanted it in case I needed it. Lack of concentration meant I took some slopes and corners too quickly which made me slide into trees along the path.

Eventually I decided it would be better to walk. Before this we passed a couple of cyclists on one uphill slope. I can’t imagine how difficult it’d have been to cycle on this path – in places even walking didn’t feel that easy.

When we stopped at a refuge for the walkers to catch up I realised just how dusty the track was. I was filthy. 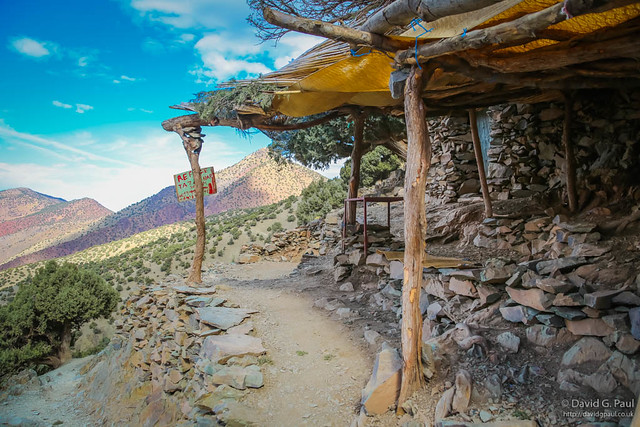 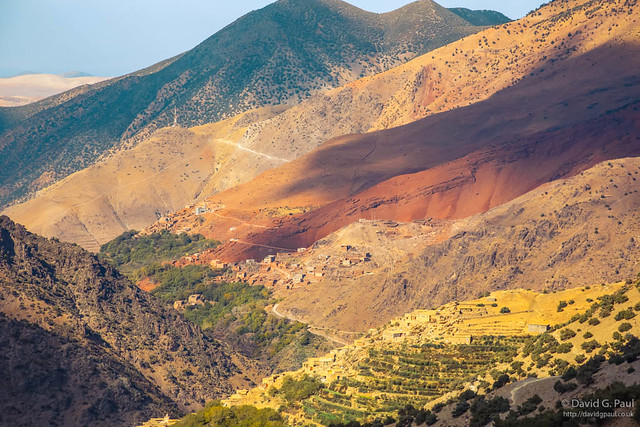 It didn’t take long to run from the refuge to the gite in Tizi Oussem. This valley looked very different to the last one, and the colours varied greatly as we progressed through the hills. The last stretch had to be walked as we’d encountered some slow moving mules.

In the gite there is a dusty open plan terrace which overlooks the valley, and some stairs leading down to the living quarters. There are two bedrooms that consist of five mats on the floor, a lounge, and a very basic washroom. At first I thought we’d be sleeping upstairs in the open, as I’d thought the downstairs bit was someone’s house. 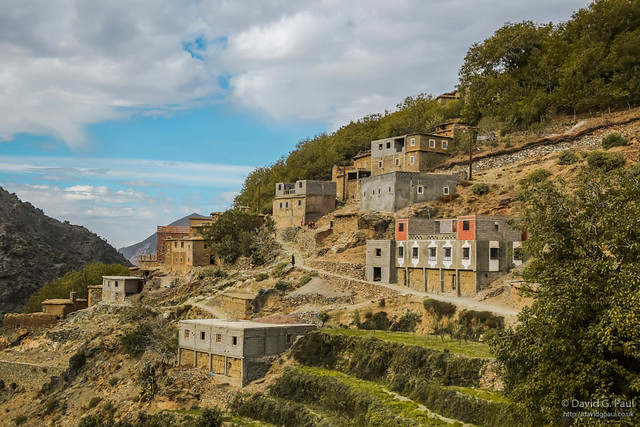 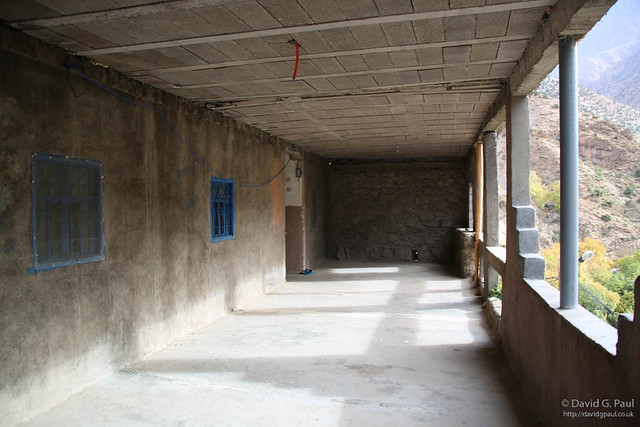 Whilst Mohammad prepared a salad for us, I drank some more Berber tea that was served in the lounge. When lunch was served there was little I could eat other than the rice. The meat served with this was mackerel, and as I don’t eat fish or seafood I passed on that too. Sometimes not being very keen on most common parts of a salad is not helpful. 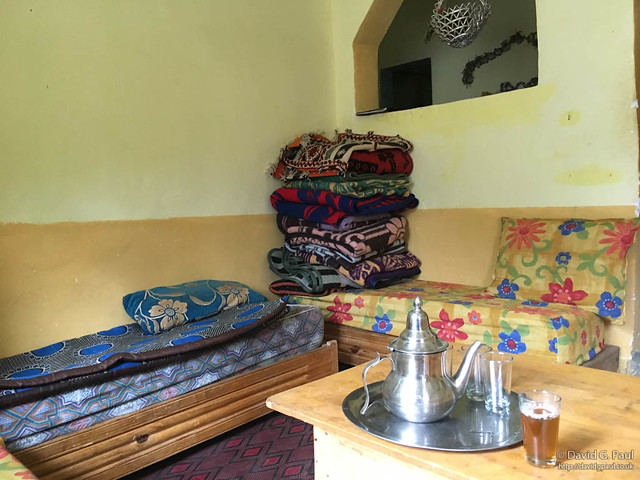 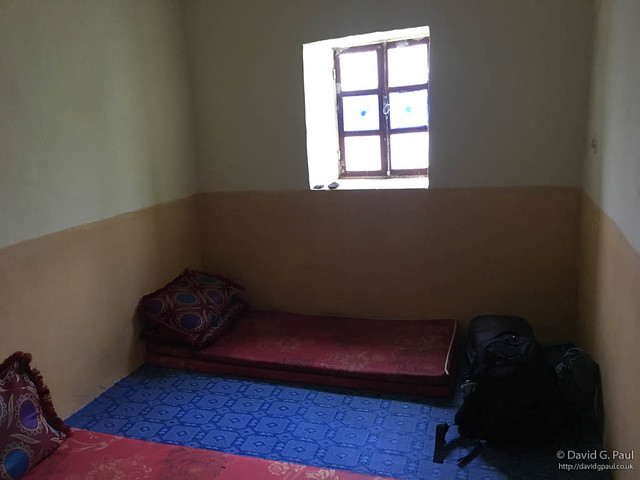 I emptied some of my backpack into one of bedrooms and then went to use their hammam. This ramshackle building has an antechamber where you can undress, and then a second room where the floor is heated by a log fire underneath. It heats a tin of water in the middle of the room which you can add cold water to from a tap in order to get some water at the right temperature for washing with. You then use the two tubs inside the tin to pour the water over yourself. You just need to be careful where you stand as the heat from the floor will burn your feet – except around the edges of the room. 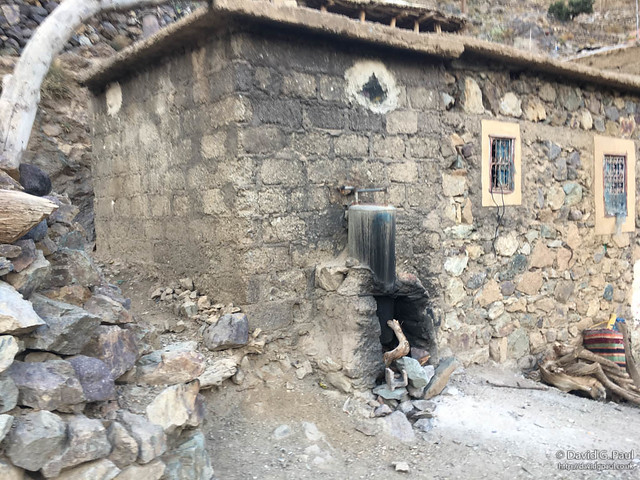 The custom of hammams is an old African one, but evolved during the Roman occupation to include a cold plunge pool. In this case it was a more traditional Berber hammam.

With only thirty minutes before sunset we went for a walk around the village. The others were giving the children stationery and sweets until we were invited into a house for a drink. We felt we should accept this Berber hospitality, so followed him to his home, and sat in the kitchen. 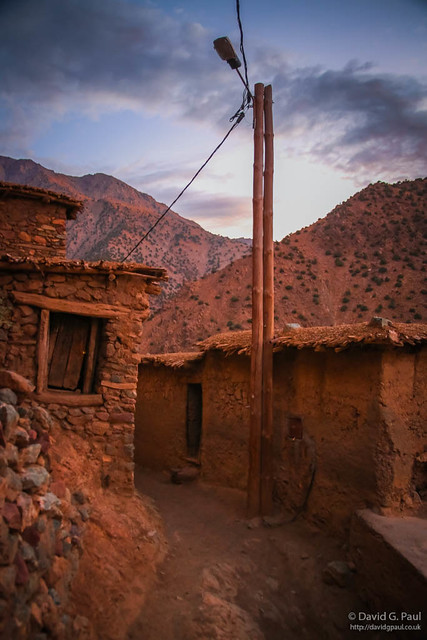 The kitchen isn’t one like you’d see in England – it’s a separate stone building with a roof made from the branches of juniper trees. At the far end of the room is an alcove with a chimney, and a log burning to heat a pot.

We sat on the makeshift chairs, and he brought a small table to us. On this he placed a pot of coffee, a plate of walnuts, and a large piece of homemade bread. 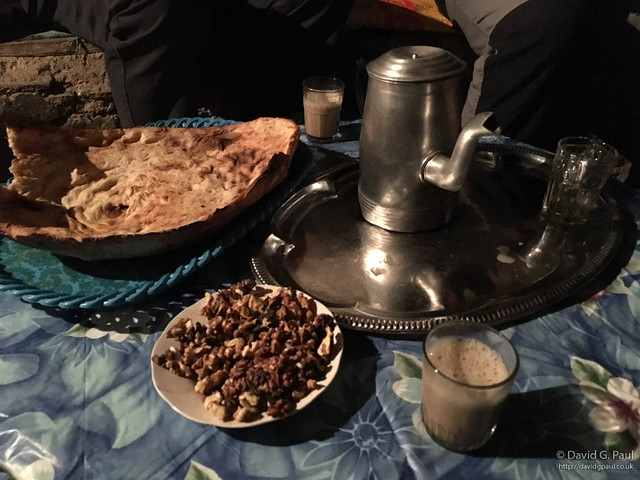 As we talked there were two cats that were going in and out of the kitchen, seeking some attention. They were for the most part ignored though. The owner of this property told our guide about an abscess one of his family had in her mouth, and asked for more hydrocortisone cream.

None of us had any, but John thought some aspirin may help so offered to get it from the gite. Most medicines you have to be careful giving to people as you can’t know if they’ll be allergic to them, or even if they’ll misunderstand the usage instructions.

Whilst we were there the sun had set and night had fallen quickly. To get back to the gite we had to use the lights on our mobile phones as torches. A little while later they served us dinner – it was a soup starter, followed by tagine. This is a Moroccan dish served steaming hot in an earthenware pot containing in this instance potato, beef, carrots, olives, tomatoes, and aubergine. They then served us a glass of pomegranates for dessert.

It had been a long day and I found myself setting my sleeping bag up not that long after. My legs hadn’t been used to hill climbs like this, and now they wanted a rest.