On the last full day of this trip we had to drive back to Salt Lake City so got up early so we could be on the road as soon as possible. It was a long drive to Salt Lake, and we still wanted to see a viewpoint in Snowbird, and to see the Mormon temple in the city.

The drive was just under four hours with just one short stop to top up on fuel, and to use the washroom there. Once we’d dropped off our bags we then headed out in search of the Snowbird resort we’d been given tickets for.

Finding the resort wasn’t that straightforward to start with as the satnav wouldn’t direct us there, but got us some of the way. From there we used the offline maps on my phone to direct us the remainder of the way up into the mountains around Salt Lake City.

As we got higher the temperature began to drop and I started to question my choice of wearing shorts and a shirt to a ski resort. It may not have been the best decision to make. When we got there we couldn’t find any parking so decided to use the valet parking – it was expensive, but the tickets for the tram were going to be free so it didn’t really matter.

Inside the Snowbird ski resort we soon found our way to where the ticket office was located, though to our surprise the lady who had offered us the free tickets in San Francisco was standing at the top of the stairs and spotted us. It turned out she’d done an extra day of volunteering there and by chance we just happened to bump into her.

We thanked her again for the tickets and headed over to the ticket booth where we handed over some ID and was presented with the reserved tickets. The tram as they call it is actually what in England we’d call a cable car. It amused me that in comparison to this, what they called a cable car in San Francisco was actually a tram.

We weren’t the only tourists boarding the tram as it’s possible to take a ride up there for US$20 per person. Tourists enter the tram first, and then following this the skiers and snowboarders eager to get to the slopes pile in afterwards like on a busy London underground train. 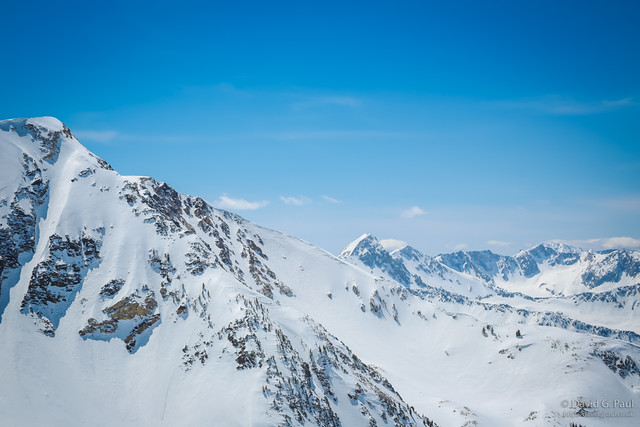 At either end of the tram there is a permanently open window which makes it easier for taking photographs out of. As we got higher though I soon found that a cool breeze blowing through the window was just too cold so instead I tried to stay warm.

At the top we disembarked last and wandered around the summit building taking photographs of our surroundings. Up here the wind was almost non-existent and the sun was warm which meant that walking around in shorts and shirt wasn’t actually that bad. My friend though was still in a thick coat and a woolly hat.

Outside on the deck there are a few tables so we sat and had our packed lunch before continuing to explore. The place was busy with people using the slopes, and watching them was pretty fascinating – especially with how fast some of them were able to turn. 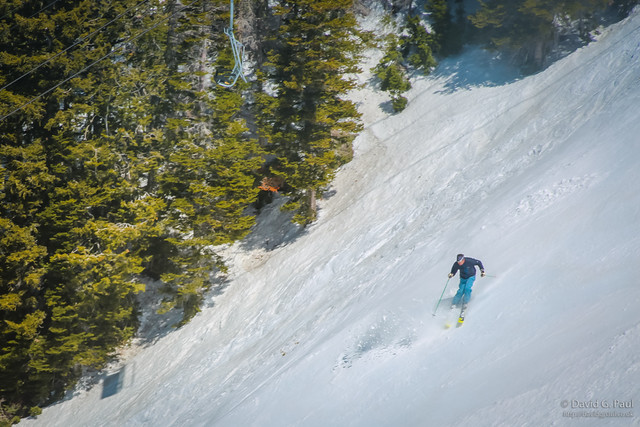 When we decided we’d taken enough photographs we headed back down to pay the US$16 for the valet parking and to collect our car. From there we drove to the Temple Square which has a number of religious buildings surrounding it, and in particular the mormon temple we’d been told about. The parking though was a little on the expensive side at US10 even though we only needed it for less than an hour.

Whilst wandering around we noticed an incredible number of wedding photography sessions happening, and we wondered about the quality of some of their shoots when we could see they were clearly shooting towards the sun.

The Salt Lake Temple is a relatively impressive structure for a modern church, though it’s one we couldn’t go inside. Instead we wandered around outside looking for what interesting photographs we could take. 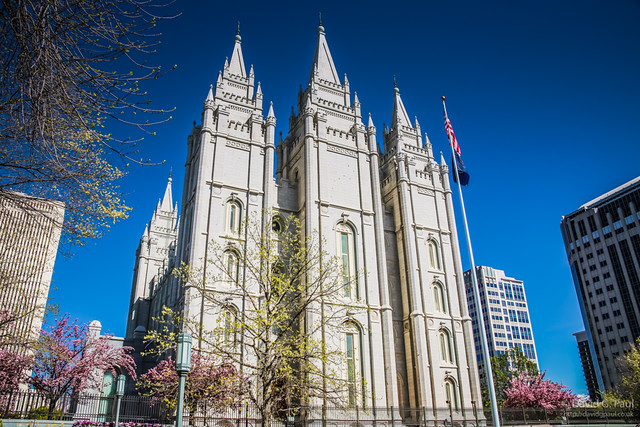 When we returned to the car we found the parking machine wasn’t working, and the parking attendant disappeared. He obviously realised the complications of this as he’d left the barrier open so people could still leave. Unable to pay for the parking due to this we headed on to the airport, filling up with fuel one last time on the way.

Once we’d dropped off the car we called for the airport shuttle and that’s when the fun began. The hotel told us to wait by passenger pick-up six and the shuttle would be along shortly to pick us up. Time passed and there was no sign of it, so my friend called the hotel again and was told to wait a little longer.

It was getting cold though as the sun dipped closer and closer to the horizon. The waiting and telephone exchanges happened for ninety minutes before we spoke to another airport shuttle driver and they told us that airport shuttles can’t stop at where we waiting. They thought that the hotel had probably meant door six instead. This was a completely different area, but eventually after almost two hours of waiting we were able to get a shuttle to the hotel.

For the evening meal we ate at Amelia’s restaurant again where I had one last steak. Back at the hotel I then packed as well as I could ready for an early start the next day.