We knew that there was little left for us to cover in Zion, particularly with my friend’s fear of heights limiting which paths we could take. With this in mind we knew we could have a fairly late start to the day. The breakfast at this hotel was probably the worst we’d had – typical that it was the place we were at for the longest amount of time.

When we got to Zion we decided to pay US$20 parking so we could park closer to the visitor centre, instead of using the free on-road parking further back. This time we didn’t have to queue for the shuttle for long at all and was soon at the “Big Bend” stop to have another go at photographing “Angel’s Landing” with the sun now in a better position.

This didn’t take long so we hopped straight onto the next shuttle and took it back to a stop with a washroom before heading to the start of the Sand Beach Trail. This trail is supposed to take around five hours to complete, though we completed it just under two hours. We did however miss out about a mile of it as you can start from two different places.

The hike was incredibly warm, and was also hard work plodding on through endless mounds of sand. For a good portion of this hike there was no shelter from the sun either which meant the heat was relentless and unforgiving. This trail is also used by horses which was evident not just by their hoof prints, but also by what they’d left behind frequently on parts of the path.

Once this hike was over I’d had enough of hiking and didn’t really want to do any more this trip; especially when it didn’t really serve a purpose. I sat down on the benches at the end of this trail and poured the sand from my shoes – it was incredible just how much of it I’d picked up along the way. 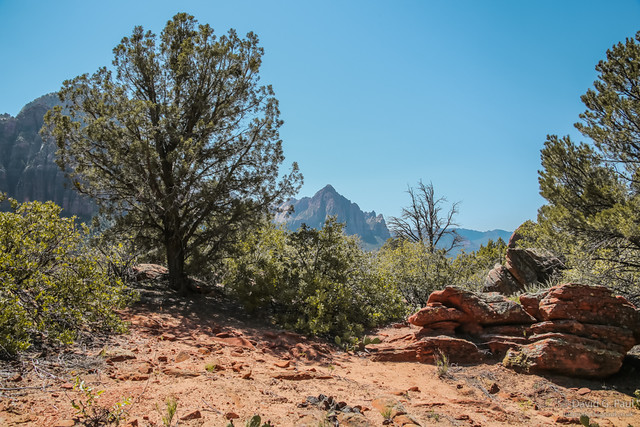 The next few shuttles to turn up at this stop were full so we decided to sit under the shelter and eat lunch before taking one to The Grotto. From there we took the Grotto Trail back to the Lodge and looked around the gift shop there. There wasn’t really anything of interest to me though so we took the next shuttle to Canyon Junction.

The video described Zion as unique with nowhere else like it in the world. I think it’s uniqueness is a combination of both the reds of the iron deposits in the mountains combined with the greens of the trees along the Virgin River. Either one of those alone is not unique and can be seen in many places, though together they’re not so common.

We dropped off our bags at the hotel and then headed back out, earlier than usual, to find somewhere to eat. On the other side of town we found a restaurant called Stage Coach Grill where I had chicken, as is often the case, and finished the meal with an amazingly large slice of chocolate cake.

We hadn’t covered as many miles today, but we’d been out in the desert sun for a lot longer. Zion Canyon was now done, but our time staying in Hurricane was not yet over.