Our original plans we’d made before we started this trip, had marked this day to cover some of Bryce Canyon and some of Zion. However, in reality as we’d already finished Bryce all we needed to do was to travel to Zion.

After breakfast we paid for the B&B and continued our journey. What I found surprising though was that the place cost us over US$280, when the quoted price of US$210 plus taxes should only have been about US$235.

The drive to Hurricane where we’d be staying for the next few days was under two hours away. The hotel wasn’t yet ready for us to check-in so we just left our luggage there, and drove back to Zion National Park.

Unlike the other parks, this one doesn’t allow people to drive through so we had to park up on the road and walk to the entrance. It was already very warm by this stage, so we applied some sunscreen before heading over.

Zion Canyon National Park, along with Bryce Canyon and the Grand Canyon form some of the most impressive canyons in the country; if not the world. It was also Utah’s first national park and has been a destination for tourists for over one hundred years.

Inside the park it was then a forty-five minute queue in the midday sun in order to board a shuttle bus. We decided the best thing to do would be to take the shuttle to the furthest point, and work our way back over the course of the next few days. 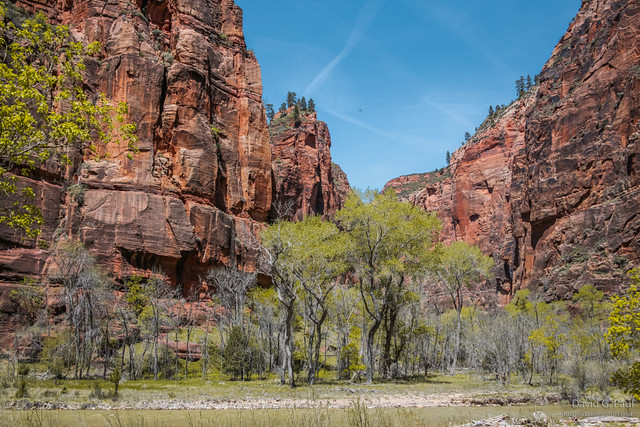 We got to Temple of Sinawava at 13:35 and stopped there for lunch using some of the supplies we’d bought the day before. This stop should have two walks available – the riverside walk and from this “The Narrows”. However the latter of these two was currently closed due to a high water level.

This walk is 2.2 miles and as a guide is supposed to take about 1.5 hours – however even with many photograph stops it didn’t take anywhere near this. In fact, it only took us around fifty minutes. The views weren’t that amazing considering what we’d seen in Yosemite, so perhaps this was a contributing factor to what made the trail so quick. I probably wouldn’t normally call it a trail however as this was a tarmaced path.

Once we got back to the start we boarded the free shuttle to get back to the previous stop, Big Bend. This stop is only a scenic stop from which you can see “Angel’s Landing”. This didn’t take long so we were soon back on the bus heading to “Weeping Rock”.

At weeping rock the trail is less than half a mile, though is still supposed to take half an hour. We had this done in about ten minutes inclusive of the time it took to photograph the weeping rock at the end. The weeping rock is where water has seeped through the rocks so that droplets fall in front of a ledge below it.

The next stop was “The Grotto” and here we decided to go for a longer walk. We started off with the Grotto Trail which eventually provides access to the trails for the lower and upper “Emerald Pool” trails. The combination of these trails should be around two hours, but we covered them in half that time. The pools weren’t that impressive however as the water was a murky brown from the sediment, and very little water was flowing. 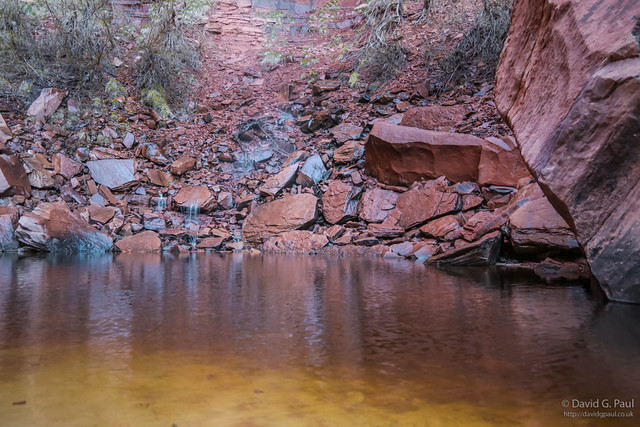 We got back to the visitor centre at 17:20, and drove back to Hurricane. The temperature by now had reached 83 degrees Fahrenheit, and the water in the car felt like it wasn’t far off the temperature of tea. After we’d checked in to the hotel we went for food at JB’s Restaurant where I had “Parmesan Crusted Chicken”, and a blueberry cheesecake for dessert. This was one of the cheaper meals we’d had as this one with a very generous tip came to only US$40 – even after we’d pointed out to them they’d missed the salad off the bill.