I’d been keen on going for a run, but I decided in -2 degrees Celsius weather that shorts and a t-shirt wouldn’t be enough. Instead I slept until it was time to head over to the main building for breakfast. This time it was yogurt with pieces of apple in, and french toast with raspberry jam on the top.

As we didn’t have much left to do in Bryce we weren’t in any rush to get going. When we finally left we first stopped by the general store to get enough supplies to last us for the next few days and drove on to the canyon. Instead of carrying on to the end we instead turned off towards Bryce Point so that everything we’d see today would be new. 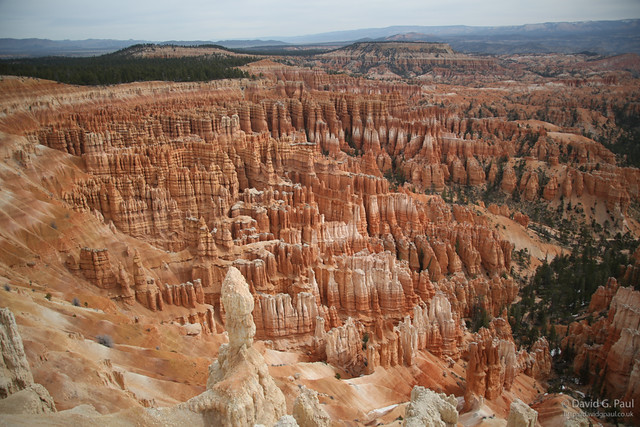 After what we’d seen of Bryce Canyon the day before, the view from Bryce Point wasn’t that impressive in my opinion, and neither was that from Paria Point or Inspiration Point. From the last of those there were some slightly different views however.

By this point it was around 11:30 and the car park for Sunset Point was full. After one complete lap of the carpark we eventually found a space on the second lap. We thought from there we were heading towards Sunset Point however we found ourselves at Sunrise Point and at the start of a different trail. We walked part way down the trail before deciding to head back in search of the Navajo trail.

At the start of the trail we could see that part of it was closed at the point where it should come up through “Wall Street”, but we decided we’d go the otherway around the route to see how far of this 1.3 mile trail we could manage. 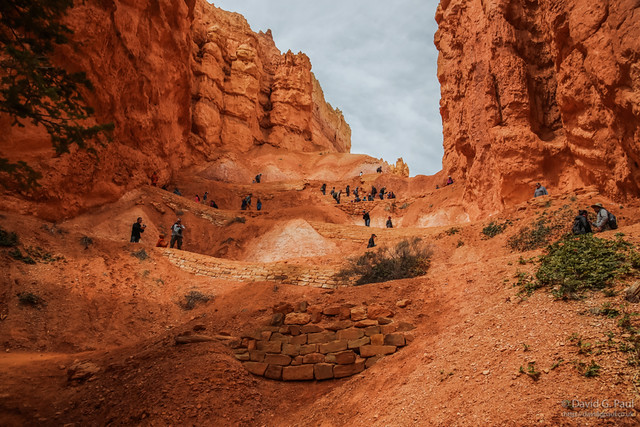 Fairly early on the trail descends through a narrow valley with many switchbacks before continuing along the bottom and along a dried up stream. Eventually after almost 1.2 miles we reached the other end of Wall Street and where the route was blocked off. It meant that most of the trail can be done, but you have to do almost double what it would normally be.

The route back up out of the canyon is harder work, especially when reaching the switchbacks but we took our time as we’d now seen everything we wanted to in Bryce Canyon. In fact, we’d seen almost everything that we could do with the trails that were passable.

On our way out of the park we came across a turning for Fairyland Canyon, though it was a very similar viewpoint to others we’d seen. One thing I did notice here though was that if someone was to park up there they could walk along the rim all the way to Rainbow Point and back without paying for entry. It’d be a very long walk though.

On our way back to Panguitch we stopped a few times looking for trails and viewpoints we might have missed, though even in Red Canyon it didn’t seem like there was much else to see. 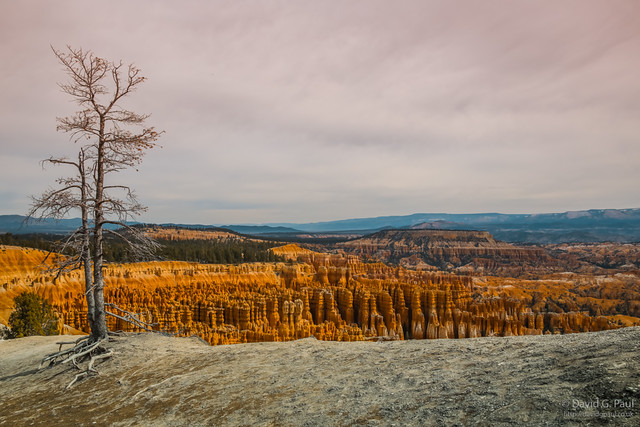 Back at the B&B I decided I’d got for a run, and headed out into the mid-afternoon heat. It’s amazing how much harder it is to run when you’re at altitude, but despite wanting to stop before I’d even done a mile I’d finished eight miles in a couple of minutes over an hour. For the rest of the afternoon I relaxed until it was time to go out for food.

For our evening meal we’d planned to eat at a place near Bryce Canyon which was a twenty minute drive away. When we got there though we found it’d be a forty-five minute wait so we decided it’d be better to go back to Panguitch and eat there. We found a small diner called Henri’s Drive-in which served burgers and other similar fast food. It was quick, and cheap, but maybe not the best tasting meal of the trip. As it was a bit on the small side I also got a cake from the nearby general store to fill the gap.

Another day had passed, and on the following day we’d be making the drive to Zion National Park – the final national park of our adventure.