Sunrise in Torrey was earlier than it was during our stay in California, and would have been the perfect opportunity to go for a morning run – however I overslept and missed my chance. Instead I went for breakfast before our drive to Panguitch, which was interrupted by a couple of stops to try and find somewhere to buy lunch to take with us. Eventually we were able to get some ready-made sandwiches for US$1.99 each.

When we reached Panguitch we dropped off our bags at the B&B. My friend was finally able to get a replacement memory card for his camera, and a replacement charger for his laptop – both to replace ones that had been stolen from our car in San Francisco.

Along the way to Bryce Canyon National Park we took some photos in the Dixie National Forest at Red Canyon National Park. This area has some impressive rock formations, though none as good as the ones we’d seen in Arches National Park, or even in Monument Valley. One difference here though is that you could drive through some of the stone arches over the road. 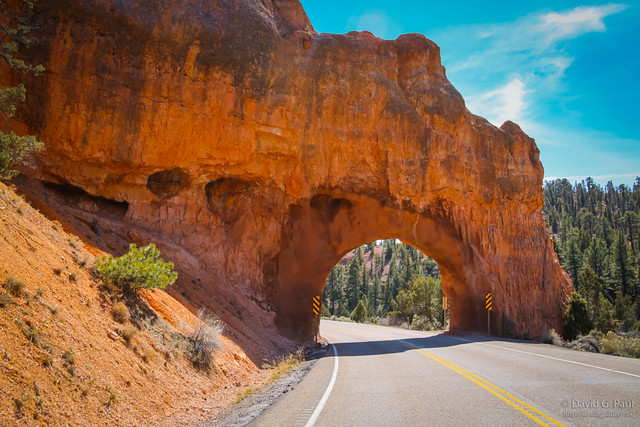 When we entered the Bryce Canyon National Park we first drove to the very end, which is 18 miles from the entrance. The entrance fee for this park was US$30, and would be good for a week – more than enough to cover our time there.

At the car park for Rainbow Point, situated 9115 feet above sea level, we wandered around at first to take some photographs, and then sat outside to eat the lunch we’d brought with us. It wasn’t as cold as it had been, but it was just bordering on needing to sit wearing a jumper.

The snow here was tougher than in Yosemite National Park, but for the most part wasn’t as deep. However, in places the snow was deep enough to cover a fence which we walked across to try and make it onto one of the trails in this area. Being able to walk across a fence without climbing isn’t a particularly common event in England. In this part of Utah it seemed like it may be fairly common as it was now early April, and a lot of the snow had actually gone but was still deep enough in places for this. The Yovimpa Point was still easily accessible via a path however. 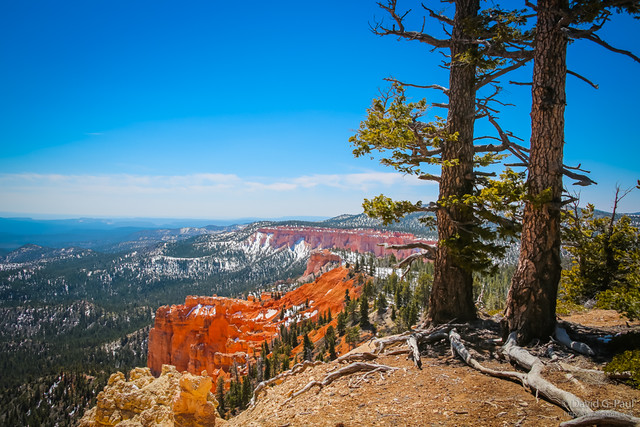 On our drive back from Rainbow Point we stopped at every viewpoint we could all the way to Swamp Canyon Point. At the Ponderosa Canyon viewpoint we walked a short way along the Agua connecting trail, but turned back just before we got there. It was enough though to get a different view of the valley.

At the Natural Bridge viewpoint we saw yet another arch, but unlike the ones in the Arches National Park, this one we had to look down on. Finally, when we made it to the Swamp Canyon Point we set off on a four mile hike along the Sheep Creek connecting trail.

To start with this trail went downhill and was quick going, but once we reached the campsite and the Hoodoo marker the terrain became more difficult. After this point it crossed the dried up creek, and the trail wound around the valley. In places we had to climb over fallen trees, and duck under others. At altitude, and in the increasing heat it started to become harder work though before we knew it we’d covered the four miles in 1hr50. 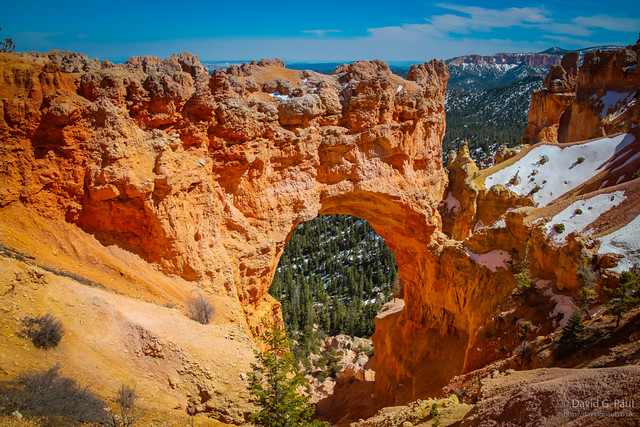 It was almost 18:00 by this point and we knew we’d got a thirty minute drive back to the B&B so we decided that we’d do the rest of the viewpoints the following day, and would drive back. Once there we spoke with the owners as we’d missed them earlier when we dropped off our bags, and then headed out to the Cowboy Smokehouse for dinner.

For the second time on this trip we’d chosen a restaurant that specialises in barbecue meals. However, after twenty minutes nobody had taken our order. When another group who had arrived ten minutes after us started to be served my friend got up and spoke to another member of staff to complain.

We were assigned a different waitress and she did a great job – I ordered pulled pork with a side of fries and beans. This arrived twenty minutes later, and once combined with their homemade barbecue sauce it quickly rocketed into becoming one of my favourite meals of the trip so far. With drinks and a tip, the meal only came to US$42 between us which is a little less than most of the evening meals we’d had so far.

For the remainder of the evening I relaxed back at the B&B and pondered whether I’d be able to go for a pre-sunrise run in the morning in what was forecast to be -2 degrees Celsius.