After a long night it was a later start to the day than we’d planned, and whilst having breakfast a thunderstorm with hailstones had begun. I realised this meant I wouldn’t be getting to see the Golden Gate Bridge from a viewpoint as I’d hoped, but at least this wouldn’t affect seeing a second world war era submarine – the USS Pampanito.

I drove us through the rain and decided we wouldn’t be parking in the same parking lot as last time. Instead we parked further down the road in a multi-story that was a little closer to the submarine. Despite this, and running to it, we still managed to get soaked by the time we made it to the ticket office.

The entry for the submarine was only US$20 each, and we were the only ones there. Despite this apparently being their busiest day of the week normally it seems the rain had put everyone else off visiting as we were the only ones onboard. This meant it was great for taking photographs as we took the audio tour around. 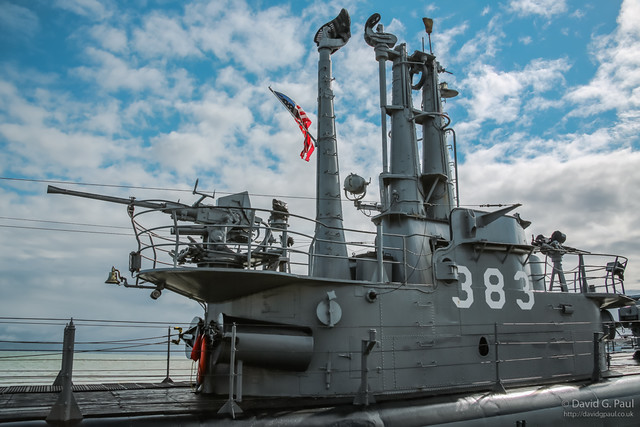 The tour starts in the aft torpedo room, and proceeds from there into manoeuvring room, the engine rooms, the crew’s mess and galley, and also the control room. The tour then exits through the forward torpedo room, and out onto the deck. 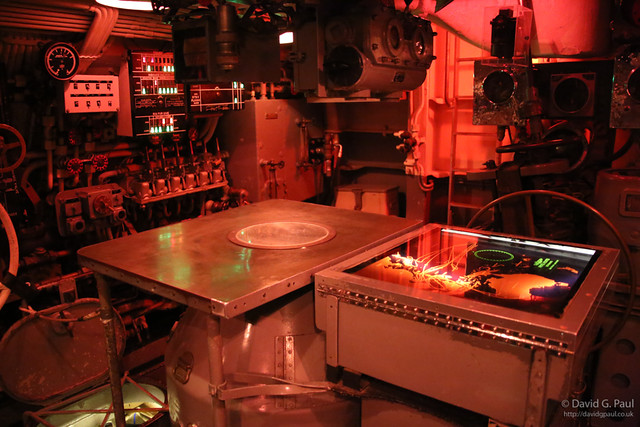 During this submarine’s operation it had been part of a pack along with the USS Growler which was the submarine I’d been on previously in New York City. It’s tour of duty had been incredibly successful, and since 1975 has been a museum ship.

Whilst we’d been on the boat the sun had come out and this was drying me off quickly. The attendant for the ticket booth had also disappeared in this time and now people were walking onboard without paying.

As we had some time left over, and as the sun was shining, we decided we’d pay the toll to drive over the Golden Gate Bridge in an attempt to get the photographs I wanted of the bridge. Along the way though I noticed that there were a few places where we could see the bridge from. In both of the places we stopped, I went off and took a couple of pictures of the bridge. From the second stop I also had to cross a field and a beach in order to get close enough – but it was enough and meant we wouldn’t need to cross the bridge after all. 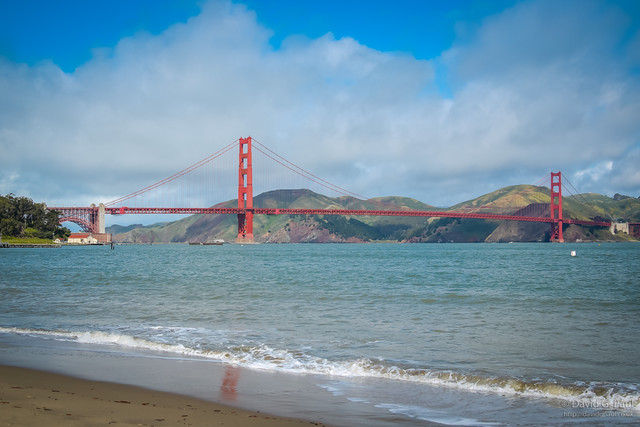 As we’d now finished everything we wanted to do, we headed back to the hotel to pick up or luggage and drove on to the airport. The check-in for this was relatively quick, but whilst I was checking in my friend disappeared again. Fortunately we met up on the other side of security.

By now it was past midday and we were in need of food. It wasn’t great, but we did manage to find a place to get a sandwich as we waited for our flight out of San Francisco. Whilst we were waiting my friend helped a couple out with some painkillers, and got talking to them. They’d overheard him talking about his equipment being stolen, and told us that they’re volunteers at a place up in the mountains that has a good viewpoint. They offered us free access for when we arrived in Salt Lake City. Unfortunately we wouldn’t have time immediately, but we thanked them, and let them know that we may have time when we return in a week.

The flight to Salt Lake City was an easy one, and in first class it was also a comfortable one with a choice of snacks and drinks. As I’d not had nachos in a while I decided to go for a packet of those whilst I watched some video on my laptop.

When we arrived at the airport it was raining heavily, so after baggage collection we made a dash across the road to the car rentals building where we picked up our car for the week – a Nissan Sentra. This wasn’t the one we’d booked but we decided after our San Francisco experience it was worth paying the extra to get one which would hide our luggage better. It would have cost an extra US$45, but having flown with United Airlines meant we only had to pay an extra US$15 per day.

The drive to the hotel was quick and easy, and the the hotel lobby was well furnished. This was our cheapest hotel for the two weeks, yet it was also the best one so far. Hopefully breakfast in the morning would keep up our opinion.

For the evening meal we ran across the carpark through the rain to the nearby Ramada where they have an attached restaurant, Amelia’s Grill and Bar – named after the famous aviator Amelia Earhart. I decided on the Bourbon BBQ Chicken which was chicken in a BBQ bourbon sauce, topped with cheese and bacon, and accompanied by a jacket potato, carrots, and broccoli. By the time we’d finished eating the rain had turned into sleet – hopefully not a sign of what weather we’d be experiencing over the next week.