Breakfast at the hotel in San Francisco was considerably better than what we’d had in Oakhurst. Though not only did we have it later than the previous days, we also left the hotel considerably later than we had in Yosemite in an attempt to avoid rush hour traffic.

Eventually we found a car park outside of pier 39 which advertised a day rate of US$37 which was actually only twelve hours. As it was 09:45 we knew that if we left Alcatraz on the last boat we’d probably have to run back to the car to meet this time.

To start with we headed up Telegraph Hill to Coit Tower via quite a few steps. This tower is named after San Francisco’s first female fire fighter and was built solely as a viewpoint. To go up to the top it cost US$8 per person but from there you could see downtown, the Golden Gate Bridge, and Alcatraz Island. 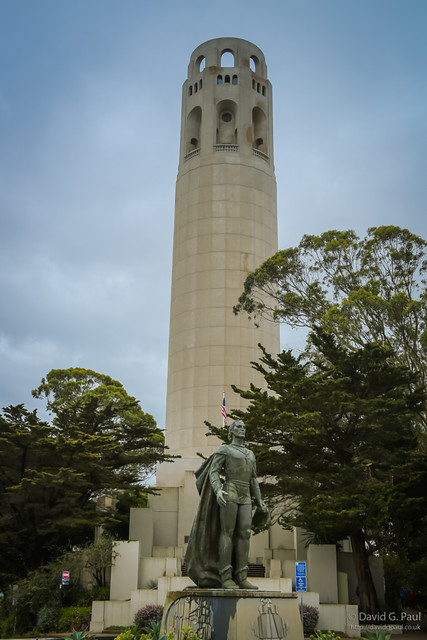 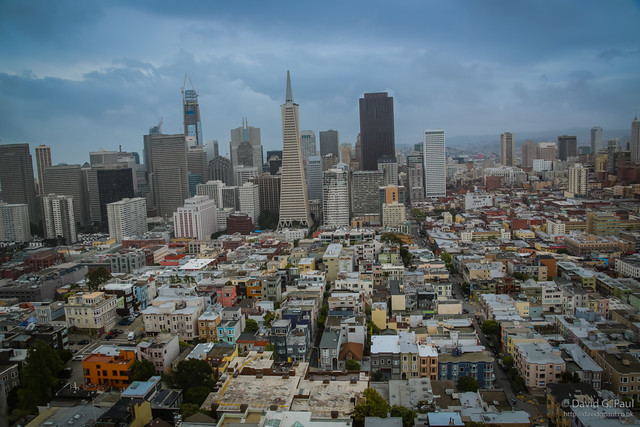 We had planned to go to the USS Pampanito in the morning, but we’d forgotten about this and instead headed further into the city to walk through Chinatown and photograph the Dragon Arch. This area did genuinely feel very Chinese and in places reminded me of Beijing and Xi’an. 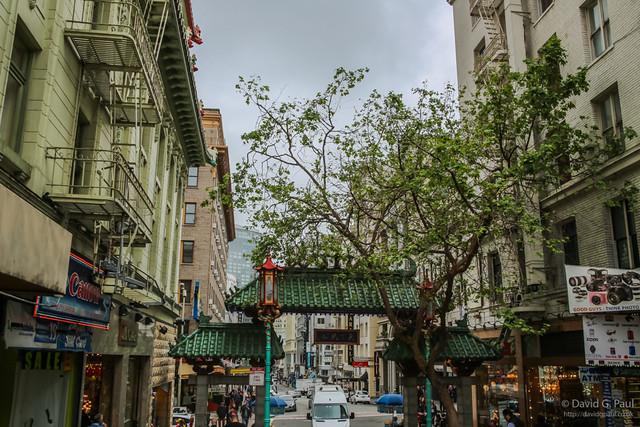 As we weren’t far from Union Square we decided it’d be worth visiting this as well. As I’d got offline maps on my phone it meant this was easy to navigate to. We noticed that in Macy’s they had a Cheesecake Factory – a place we recognised from television. As we wouldn’t be eating until late we decided it would be a good idea to go there for some of their famous cheesecake before continuing on. I went for a large piece of cheesecake that included bits of Snickers bar as topping. 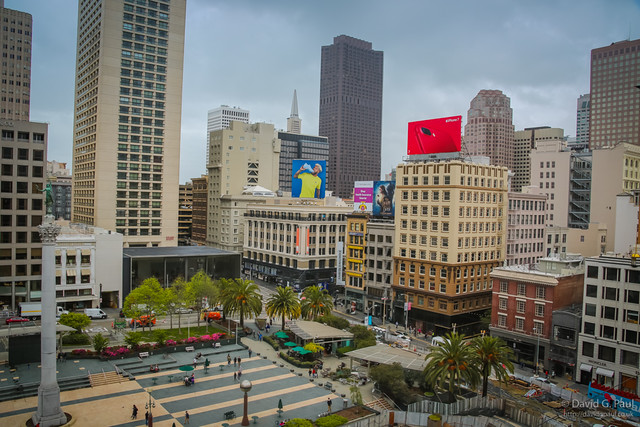 After this our plans weren’t that fixed, and we decided to head towards Columbus Avenue and see where we ended up. I thought it’d be good if we could make it to Fort Mason as there was potential for a good view of the Golden Gate Bridge, though my friend wasn’t feeling great so we sat inside a church for a while before heading back to the car so he could get his sunglasses.

Once my friend had his glasses we doubled back on ourselves and headed in the direction of Fort Mason, but time was now against us. It was this point that we had also realised we’d forgotten about the submarine we’d planned on visiting, so I went on ahead and found out the opening times for the next day before continuing on.

We got as far as the Historical Maritime Park when we decided we couldn’t make it the rest of the way in time so decided I’d run on ahead and attempt to get the photographs I wanted to save time. To start with I walked fast, but then when I got there I found the view of the bridge was terrible – mostly due to the fog. 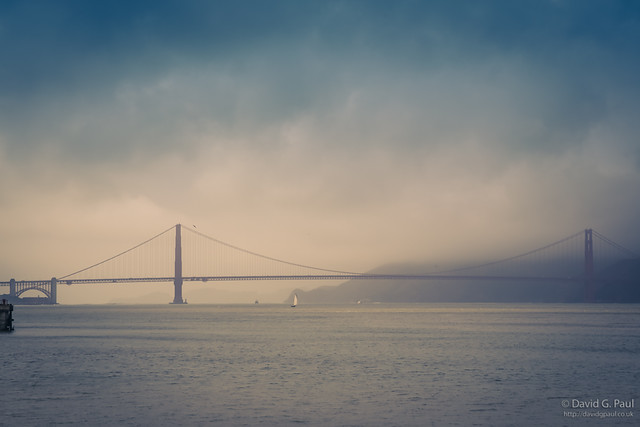 As I was now running short on time I decided I’d run out to the viewing point on a pier to see if I could get a better view of the bridge. From a certain point of view I could – I could see more of it, but it was still shrouded in clouds. As I was now getting extremely low on time I ran back to the Historical Maritime Park where I’d left my friend.

It was now mid-afternoon and we’d got just over an hour until we needed to be at pier 33 for the Alcatraz tour. We hadn’t yet however had a proper lunch so we went to the Boudin Bakery which are famous for their sourdough. I decided to go for their turkey and avocado sandwich without the avocado and it tasted really good. As this was a quick lunch it then gave us more time than expected to get to the pier so we went back to the car one last time so my friend could change his shoes. 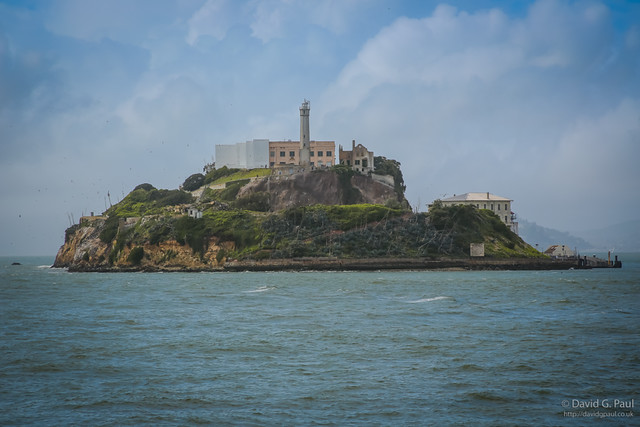 We boarded the boat for the island at 16:15, and only twelve minutes later we’d made it across to the island’s pier. We were greeted by National Park Service guides who then led our group of thirty around the island.

Our tour started in the gatehouse where we were told that Alcatraz Island was first used as a fort with a dry moat and drawbridge to defend against attackers wanting to gain access to the gold in San Francisco during the gold rush. This of course is where the Golden Gate Bridge gets its name from – it spans the gateway to the gold of San Francisco. They never experienced an attack and the island was later converted into a prison upon the orders of President Abraham Lincoln.

After the prison closed due to the amount of money that would have been required to bring it up to standard, it was briefly occupied by native Americans and some buildings knocked down by the government. It was then turned into a national monument however and is now run by the park service to maintain it for future generations to see.

On the other side of the gatehouse we went up the ramp to some destroyed buildings. From there we accessed the first area that was exclusive to the behind-the-scenes tour – the area alongside the power station. At the side of this there is an archway under the road which says to “blow your horn” so that anyone walking out the doors won’t be unexpectedly hit by cars. On the other side of this there is a tunnel that was built by labourers from the prison. At the far end of this the park service has knocked through into another building which is a workshop. 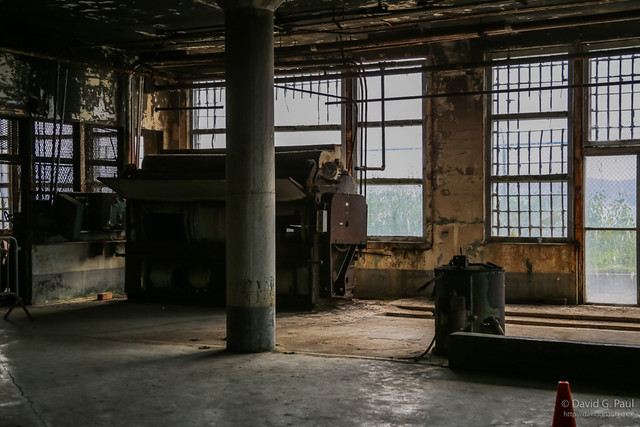 The next off-limits area was the officer’s garden which overlooks San Francisco and Angel Island. From there we headed up to what was formerly the citadel, but later became the main prison building after all but it’s cellar was levelled and rebuilt. Inside here our first stop was another off-limits area that was situated through the visitation area and up some stairs to a chapel. This chapel also doubled as a theatre on some nights, but it was evident that this was also occupied by native Americans after it’s closure.

In “A block” we were then taken to some stairs down into the cellar where the original solitude cells were located. In the later years of the prisons life these cells were closed down due to humanitarian issues and was moved into “D block”. It was said that these cells would drive prisoners insane due to the darkness and the sound of rats amongst them. The cells under the main building were in a place that would once have been the dry moat around the citadel – some of the only remains from that time. Whilst we were there they turned off the lights that the NPS had fitted to demonstrate what it would have been like down there. It was dark. Very dark. In this place there wasn’t even a feint hint of light which is what often helped to drive prisoners mad. 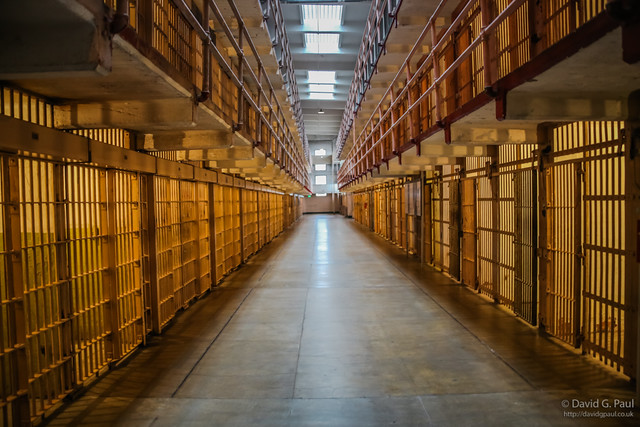 We then started an audio tour of Alcatraz starting from the shower block where another of the murders had taken place. This audio tour took us all around the prison and told us about the history, the functions, of the rooms, and what life was like here.

Following this we then went to two talks – one which covered the prison break attempt of one prisoners, and then another that covered details about the number of people involved in another prison break attempt. We left during this one as we decided it’d be better to get the 20:40 boat and get back in early enough for food.

We got back to the parking lot at around 21:15, and went straight to top up the car parking for a couple more hours – costing us another US$15 to do so. When we got back to the car I opened the back of the car up and noticed that there was glass all over the floor – then I realised the window had been smashed. My friend’s camera bag had been left in the back, hidden by the tinted windows – but the thieves had smashed the side windows first and had obviously then seen his bag and subsequently smashed the back to get it.

My friend no longer felt like going for food, and was suggesting we should drive back to the hotel; though I was insisting we should phone the police and the car rental company first before moving anything. As we were discussing this we were approached by someone visiting from New Jersey to see if we needed help. We explained to him the situation and he quickly dialled 911. It took him several attempts to get through – so a good job it wasn’t an emergency. After he’d explained what had happened to them they said they wouldn’t be sending anyone out, and we should dial 311 to report it for the purpose of insurance.

My friend dialled the number we’d been given and they emailed him a form to fill in to report the incident. Following this we called the car rental company to tell them what had happened, and after giving us an incident number it seemed they expected us to carry on with the car having a smashed window. So I drove us back to the hotel – seemingly one of the longest twenty minute drives of the week whilst my friend, in shock, spoke to his cousin on the phone about what had happened. As I drove back glass continued to drop from the rear window both into the car and onto the road – it didn’t seem like a great idea to be driving this.

When we got back to the hotel we warned the reception that our car may spill glass out into their car park, but they didn’t seem bothered by it – nor did they want to help us. We emptied the car in the pouring rain of anything left in there of value. Over the hours that followed my friend tried to make a list of what he’d lost, and began to pack for the upcoming flight. By the time he’d done it was gone midnight and all we’d eaten was a couple of biscuits.