With a long hike planned for the day, our second day in Yosemite was another early start. We’d decided to set alarms for 06:30 to give that little extra time in hope we could get breakfast early and get on the road that little bit sooner. It worked out that we got on the road ten minutes earlier, and by the time we got to the start of the trail up to the Upper Yosemite Falls it was a little passed 10:00.

The start of this trail zigzags up the side of the mountain for some time before eventually straightening out a little. It eventually crosses a number of waterfalls, though even with the amount of meltwater we were encountering they weren’t too difficult to pass without getting wet. I was in shorts and t-shirt, and carrying a 10kg pack with one litre of water along with camera equipment. This made the climb harder work as it meant I was getting warmer quicker, though even though we’d had a brief stop by this point, we were making good time. 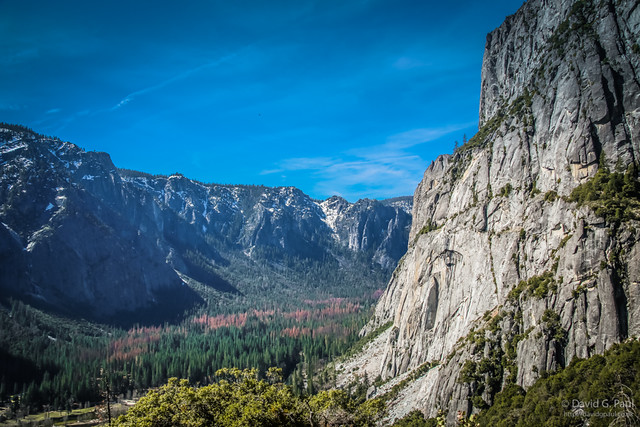 After passing these waterfalls the path then goes back down until you approach Yosemite Falls. Here, depending on the wind, you’ll get a little wet from the spray being blown around – but it wasn’t bad enough to warrant waterproofs. It was a little refreshing. 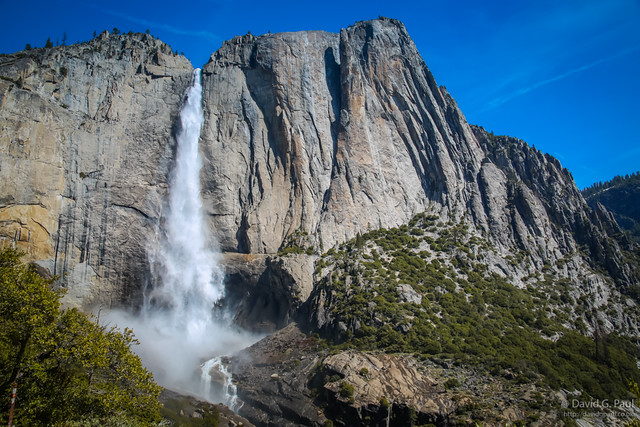 This area is a great spot for photographing the upper Yosemite Falls and is possibly the best view of them. We stopped here for a while which gave me the chance to use my tripod and capture some of the rainbow arch that appeared through the water. Once passed there the climb continued on to the top, a lot of it without shade, and eventually through streams and snow. We’d taken our time though, and reached the top in 2hr45. 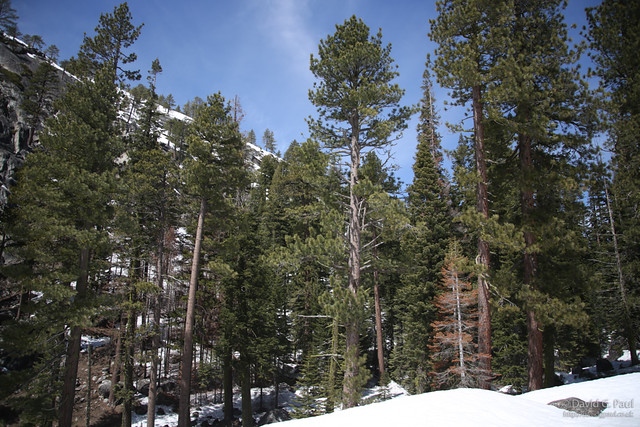 The snow across the last part was quite deep, but the viewpoint area itself was clear of it. A few people were sitting around at the top, but not many were going down to the Yosemite Falls Overlook. These steps were narrow and had a handrail you could cling to in order to avoid falling to your death should you slip. My friend’s fear of heights didn’t help him there, but he made it down. The overlook however wasn’t really worth the effort as you can’t see anything.

Back up the stairs we went looking for the trail to Yosemite Point, but we decided the path was inaccessible without better equipment so we sat and ate lunch. We were after all in shorts, t-shirt, and trainers – not the ideal clothing for hiking across snow.

After lunch we found an alternative route down to the bridge across the falls, and for the most part managed to stay dry despite the snow. Once over the bridge the climb became far steeper, and was actually very difficult in trainers. My friend went on ahead, so far in fact that I eventually lost sight of him. I was slipping down in the snow frequently, and on one occasion had to backtrack to pick up my lens cap that had been knocked off my camera. Eventually he waited, and I caught up with him – though it was difficult to not show how angry I was about it. If I’d injured myself when sliding in the snow I’d have been on my own – nobody else was in sight.

From there we continued the climb at a slower place and eventually reached the top where we found a rocky outcropping that was free of snow. This was Yosemite Point and had a good view the Yosemite Valley and Half Dome. 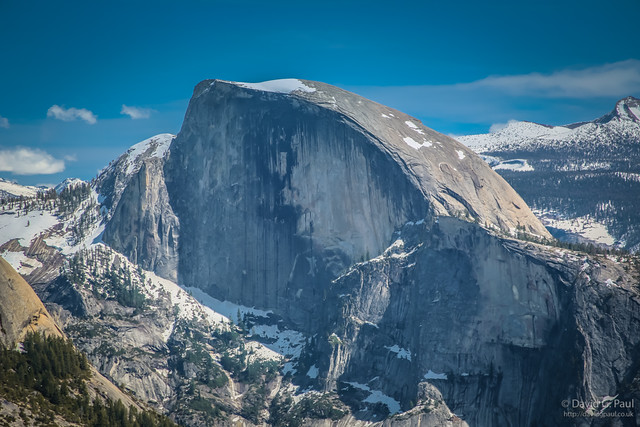 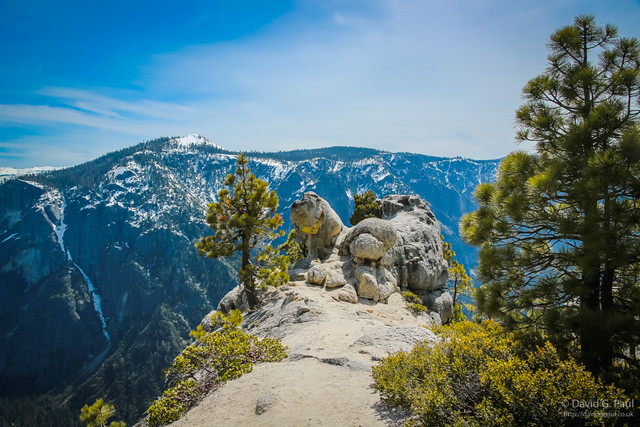 Our route back down was much steeper, though we tried our best to keep to areas where people had left footprints in the snow previously. By this time my feet were feeling very cold from the amount of snow that had gotten inside my shoes whilst traipsing across the snow. Even though I was wearing shorts and t-shirt the rest of me wasn’t anywhere near as cold. On this descent my friend slipped on a rock, and grazed his arm – leaving a trail of blood.

Back across the bridge we then paused and looked back at where we’d been. To look at it, it was incredible just how steep it actually was and to know we’d climbed and descended it in the snow. From there we climbed back up to the path down the mountain, crossing the streams we had done previously.

The descent was slow, partly because my friend isn’t keen on heights and so looking down was not doing him much good. We paused a few times as our feet were getting sore from the dampness and the amount of walking we’d done. I also ran out of water eventually and was starting to feel dehydrated.

As we got near to the bottom I slipped on a rock and jarred my neck, though by the time we got to the bottom at 17:05 it had eased off. From there it was a short walk back to the car, from which we drove back to the Yosemite store to buy food for tomorrow’s lunch.

It took 1h20 to get from the store to the hotel, and after dropping off our cameras we headed over the the Sweetwater Steakhouse. I went for the New York steak – it wasn’t bad but there was a lot of fat in the meat which meant although it was sizeable there was quite a bit left over. This with a drink they kept refilling came to $60 with tip.