I slept quite well, at least better than I normally do at the start of a trip. I awoke once at 02:00 and thought it was light out. I looked at my phone, and then my laptop and it didn’t make sense that there was light coming in through the window. I then realised it was the light from the corridor, and fell asleep once more until 05:00.

This time when I woke up I decided that although it hadn’t been long since the marathon, I’d go out for a four mile run to loosen my legs. It was still dark when I left out, and a little cold, though there was still the occasional car about. To start with I ran along the pavements on the same side as the hotel, looking at what buildings there were as I passed. I’d decided it’d be a good idea to see what food places were around for later in the day.

Although none of the pavement was particularly well lit I eventually ran out of pavement so decided to turn back and go the other way passed the hotel. Going in the opposite direction I noticed that a new hotel was being built, but also that there was a nice-looking barbecue place over the road – a potential place to eat in the evening.

After a quick shower I went for breakfast, though this was incredibly basic – as American places out on the road often are. I was then able to quickly sort out my camera and what I’d need for the day and we were on the road a little after 08:00. Only twenty minutes later we joined a queue which seemed to not move forever, however in reality we were going again after about fifteen minutes. It seems the queue was something to do with single file traffic whilst they were performing some logging.

We found the park entrance was forty-five minutes from our hotel, and the permit for entering although US$30 would be good for seven days. It was then a long drive down into the Yosemite Valley, though once you’ve passed through the long tunnel the places for stopping become frequent.

One of the first stops along this drive is a great viewing point for imposing rock face of El Capitan. The backdrop to this includes other sights of note such as the iconic Half Dome, cathedral rocks, and Bridalveil Falls. El Capitan can also be seen from at least one other stop, and at this later one you can get a little closer should you wish to. 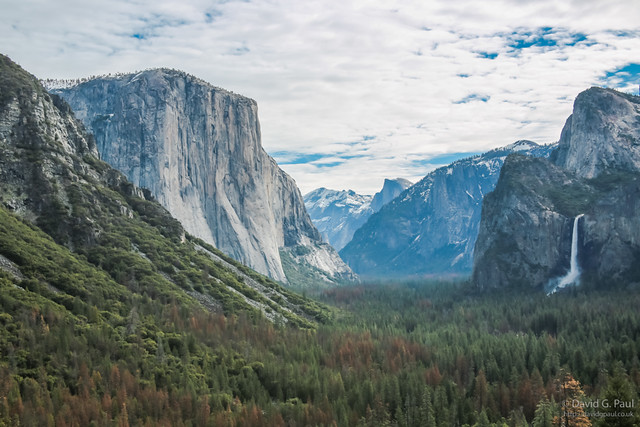 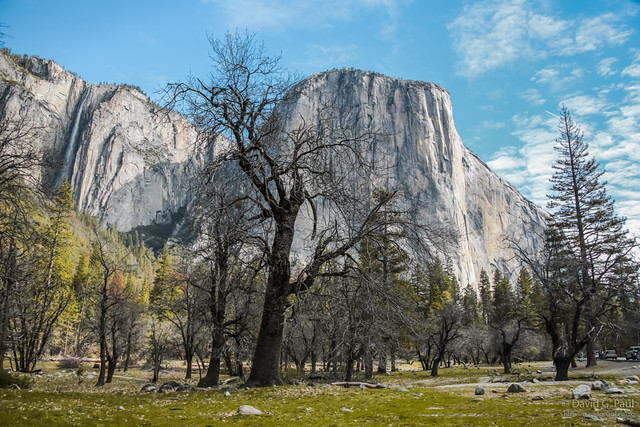 Most of the places to stop after this are either viewpoints for waterfalls, or are camping sites. Eventually we did park up and went on our first hike of the day. For this we walked along a closed road section and reached a crossroads where we could either go to Mirror Lake, or do the Misty Trail. We decided on the latter.

The Misty Trail can be considered to be a relatively tough trail, especially on legs that had been for a post-marathon recovery run. Some parts of the path are quite steep, but once you’ve crossed the bridge at the bottom of Vernal Falls the path also becomes uneven and rocky. As this trail goes on it also becomes a little damp – damp enough in fact that a coat is recommended. 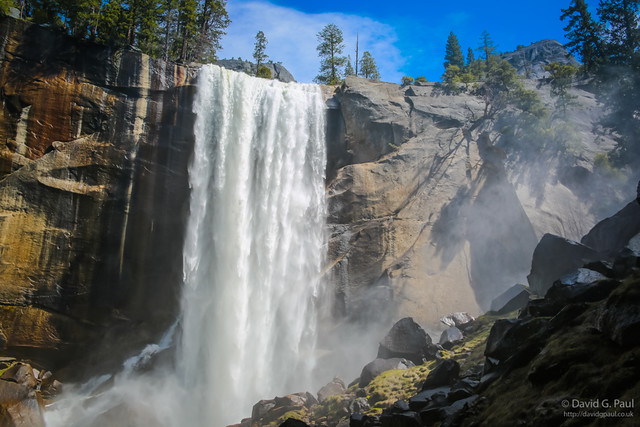 Once you reach the point of the trail where the wind blows the mist across the path, you then encounter a cave as well – I found this area to be particularly cold as the water vapour cools the air considerably. The path then gets steeper and even wetter. For those that aren’t keen on heights, after this point the path does have a handrail – so this helped my friend get to the top. 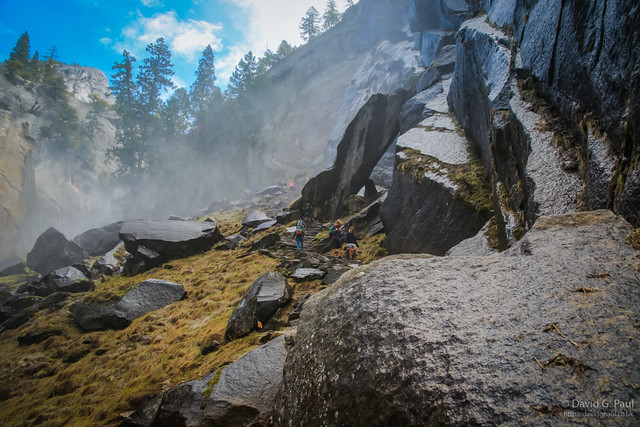 Once you reach the point of the trail where the wind blows the mist across the path, you then encounter a cave as well – I found this area to be particularly cold as the water vapour cools the air considerably. The path then gets steeper and even wetter. For those that aren’t keen on heights, after this point the path does have a handrail – so this helped my friend get to the top.

At the top of the falls there is a rail around the edge to stop you going too close to the edge, and also to stop you going into the water due to it being fast flowing. We spent a few minutes there taking photographs back along the canyon, but if my friend hadn’t had tired legs there was also the option to carry on walking to Nevada Falls. This however would have added a few extra miles on to the journey, and my friend was also getting hungry.

Once we’d made it back to the car we set off looking for a place to get some food. The map suggested a couple of places as an option but detours meant we weren’t taking the most direct routes there. Eventually we decided the best option was to use the Yosemite Store and buy things for making lunch with. Rather than eat this in the car park there, we drove on to the car park to Yosemite Falls and ate there instead.

After lunch we went for a walk to the Lower Yosemite Falls, and once again got wet from the wind blowing the spray from the waterfall across the path. This was another area where there was still a considerable amount of snow about, even though it was now in the low twenty degrees Celsius. At the waterfall I was careful, and managed to keep my camera and me mostly dry – even risking some longer exposures on the shots. 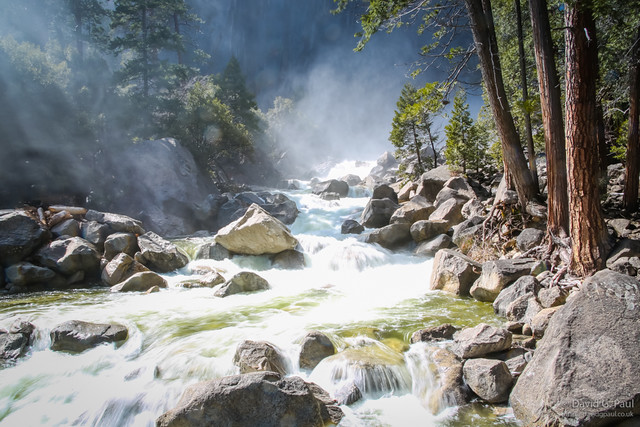 We then thought we could quickly do the Upper Yosemite Falls as the map suggested it was only a couple of more miles and didn’t indicate and level of difficulty. On the way to the path though we asked a ranger how far it was and was told the trail takes about seven hours on average but can be anywhere between five to ten. We certainly didn’t have time for that, so instantly made the plan to do that as our hike for the following day.

As we still had some time left we decided to loop back around to where we’d come from and hike across to Mirror Lake. The signs though for this are completely wrong – at one point it says 1.2 miles and approximately half a mile later it said one mile. In reality it was more like two miles across uneven terrain so does take close to an hour to get to.

The Mirror Lake is a fairly scenic area, and finally gave me an opportunity to use my new lightweight tripod – proving that it was not just worth the purchase, but worthwhile me carrying it along on these hikes. 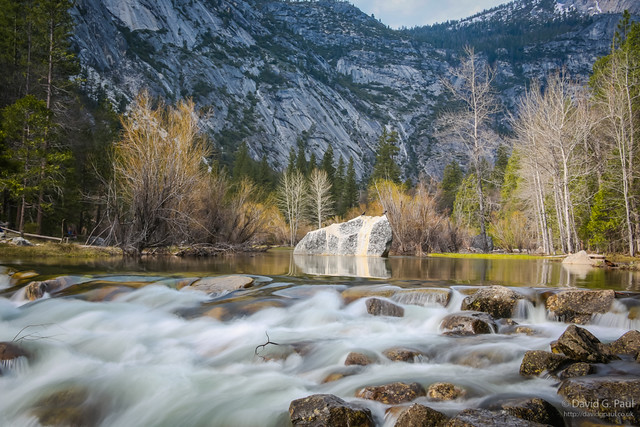 By the time we’d arrived back at the car we’d covered 12.2 miles during the course of the day, but then had almost two hours of driving to go to get back to Oakhurst. When we arrived back we filled up with fuel ready for the next day, and then went over to eat at Alice’s BBQ. I went for a BBQ chicken special with beans and fries. It wasn’t too bad, but I’ve certainly had better barbecues elsewhere.