The pick-up was once again at 08:00 meaning we’d miss the breakfast for the second day running. Unfortunately my ear still hadn’t improved meaning that I thought I would have to miss this day’s worth of diving. I had this horrible feeling that if I dived I would cause irreparable damage to it. However, when we were picked up by the guide (a different one this time) he insisted that if I take it slowly and stayed as high as I could then it may be okay. His reasoning was that he’d had similar before and that time it was just inflammation in the ear from frequent equalising when doing multi-level dives.

For today’s cenote diving we headed to Dos Ojos where we’d use the same entry point for both dives. Each dive would be different though as there were two different lines for us to take. The name, Dos Ojos, is spanish for “Two Eyes” and refers to the two cenotes that are connected by this cavern system.

The Dos Ojos system is one which has featured in various TV programs and is still being explored to a degree despite what is known so far as being 82km of caves with 28 cenote entrances. It is known to exit through to the ocean (this was determined via the use of tracking dyes), though no human has yet followed it all the way through.

This cenote was about 40 minutes away from the dive shop and once there we were briefed on the entry and the plan and then assembled the equipment. Before entering we also brought down the second air tanks so that we could make a quick changeover after the first dive. After entering the water I found my BCD was leaking air and wouldn’t keep me afloat on it’s own – it was taking quite a bit of my own effort to stay afloat on the surface. When I spoke to the guide he looked at the BCD and the tank and couldn’t figure out what was wrong with it and suggested I should dive anyway. 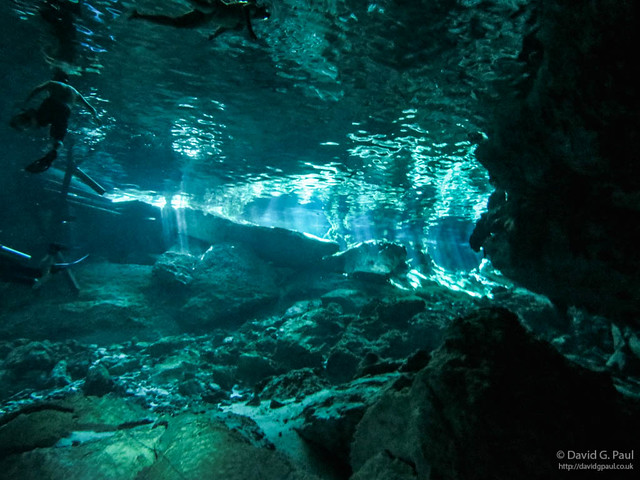 To me, diving when your equipment has a known fault is just crazy. Yes, I could probably have gotten away with it but it’s not worth the risk in case the fault gets worse. Instead I exited the water and the guide from the previous day was on hand to help and was able to fix the BCD. I don’t know what was wrong with it other than being told it was “faulty” but after taking a tool to it he was able to fix it. Sure enough when I entered the cenote I was able to inflate the BCD correctly.

The first line we took allowed me to try and stay higher than on the previous day’s dives and although I had some issues with my ears they weren’t as severe as the previous day. Half way through this dive we reached what is known as “The Bat Cave”, and the other cenote entrance before looping back and exiting where we’d entered. Again my face was covered in blood, and again it was determined to be a nosebleed. On the surface though I noticed that I more or less had working hearing in both ears. 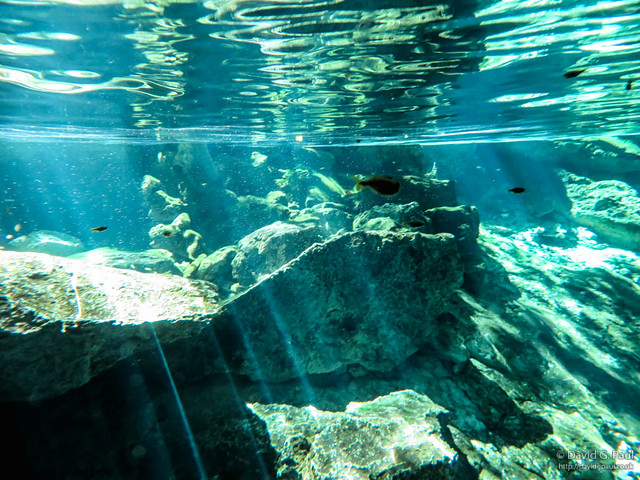 After swapping over the air tank we again entered the cenote and took the second line out. This time there were some tighter gaps between rocks and stalactites where I had to be careful not to snag any of the hoses on them. This line is called the “barbie line” as at the far end of it there is a toy barbie doll and alligator tied down to a rock. I enjoyed this dive far more than the previous dives. I was more in control, and was able to work on technique whilst trying to keep my air usage to a minimum. Amazingly I didn’t even have an issue with my ears on this dive either but that didn’t stop me from finding I had a nosebleed yet again upon surfacing. 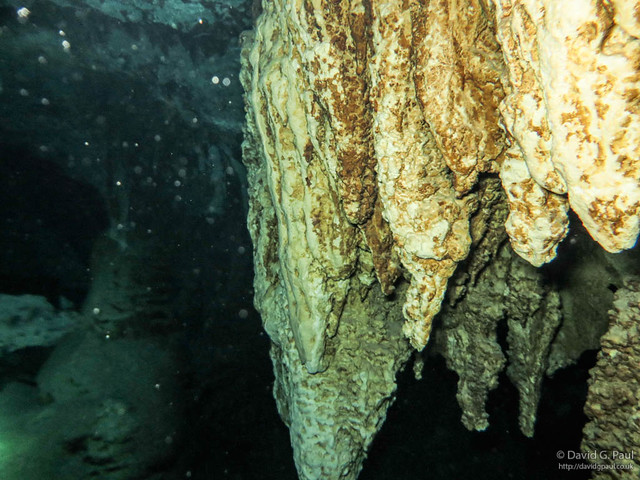 For the next 20 minutes my hearing seemed pretty good, but by the time we’d packed all the equipment away and had lunch I’d noticed that the sounds had started to become muffled in my right ear again. By the time we were back at the dive shop it wasn’t far off being equally as bad as the previous day, just without the sensation of them being filled with water.

Once we’d paid we were then taken back to our hotel where we then stayed for the next few hours – again relaxing in and by the pool until we thought we should plan what to do the following day. Unfortunately when browsing on the internet we didn’t really find anything so we headed out into the city to have an evening meal.

After the meal we noticed an portable tour kiosk over the road so went over and checked what they had to offer. We then booked a snorkelling session in Puerto Morelos for US$89 which would last the majority of the day, but did include lunch. At least it wouldn’t be any more torture for my ears, so maybe they’d then get chance to heal and return to hearing normally.