Waking up at 04:30 is never a nice thing to have to do, but in Mexico this is 3 hours before the sunrise at this time of year. It had been an interrupted sleep though as many people passed talking loudly at around 00:20. Not helpful really.

Upon checking out of the hotel they handed us the pre-packed breakfast we’d requested the night before and went outside to wait for the tour bus. This arrived 10 minutes late and then for the next 30 minutes continued around the city collecting the other members of our group – all Spanish, and not one person on the bus capable of speaking English. We’d been warned it would be cold in the morning, but still we carried on wearing shorts and t-shirts and it wasn’t that bad really.

The drive through the countryside and into the mountains was dark, windy, and bumpy. Every so often (a couple within a mile) there would be a severe speed bump in the road which made progress slow as the driver dropped to below 10mph for each one. Eventually the sun started to rise and illuminated the mist that was rising from the trees in the valley below us. This area really reminded me of my time in Peru and Ecuador – it had a very South American feel to it.

As the drive continued we passed people walking to work carrying machetes and eventually we descended down into the mist and to a cafe which I think was in a small town called Ocosingo. By this time it was 07:50 so we were given 40 minutes to have breakfast. There was food available to buy, but since we’d taken breakfast with us we did attempt to have it. The pack-up consisted of a ham sandwich with lettuce and onion, and a cheese sandwich with lettuce and onion. Sadly I’m not that keen on onion and even after removing it I could taste it. There was also an overripe banana, and an under-ripe orange along with a bottle of water. I attempted to eat the banana but it was that ripe it wasn’t really edible. Fortunately I’d got a croissant with me also that I’d bought the other day so had one of those also.

The cafe staff all had facemasks on, presumably to help prevent them from catching colds and the such, but they weren’t actually wearing the masks right (they weren’t covering their noses) so wasn’t really sure. After a late return from one of the tour group, we then carried on towards Agua Azul (a Spanish name meaning “blue water”), and along the way we went through a military checkpoint where one busload of locals had been emptied out of their coach for it to be inspected. 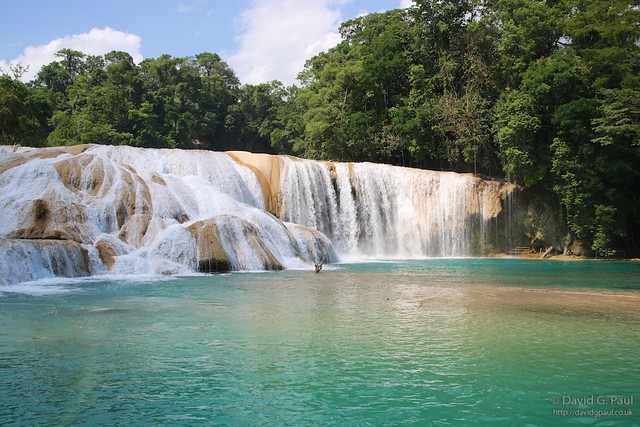 We arrived at Agua Azul at 10:10 and was given 1hr30 to look around, and if we wanted to, swim. The water here is a clean blue colour and flows over many different waterfalls at different levels creating a large number of different sized pools that you can swim in. The falls range from 3 metres to 30 metres and there are over 500 there in total. Around some of them they also have a coast guard keeping an eye over the people swimming. As far as I could tell whilst I was in the water before leaving there didn’t seem to be any fish. I assume it’s the flow of the water that keeps the water clean, and mostly free of algae. 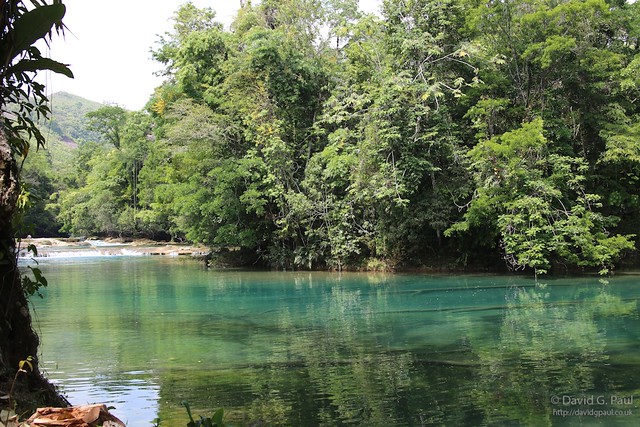 By the time we’d finished doing some photography though there wasn’t a great deal of time left. I had a brief paddle in the water about halfway down the falls but couldn’t really spend any proper time in it. On the way back we looked around some of the market stalls, though the quality of a lot of the items wasn’t brilliant. I was tempted by an ornament until I found it was actually badly chipped. The weather had heated up and was looking to be a very warm day if it continued to warm up until lunch time. 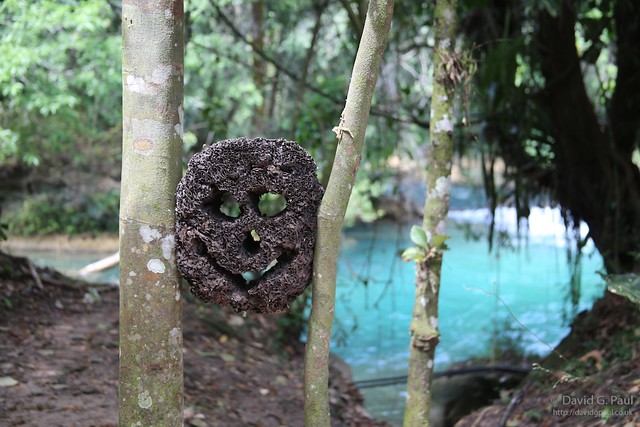 We could have had some lunch at the falls if we’d been given enough time, but there wasn’t time to do it all. Ideally we needed at least another hour to an hour and a half there to get a proper swim and food in as well. We knew we’d be getting into Palenque in the early afternoon after the early pickup so it made no sense why we weren’t there longer.

Again, the same person was late back to the tour bus, but we then continued on to Cascadas de Misol Há (in the Ch’ol language this means “waterfalls”) and arrived around 12:50. At this one we only had 35 minutes to look around. To start with we looked at the waterfall from the front, watching tons of water pour down from 35 metres above. Afterwards we followed another path that went behind the waterfall, across some algae covered rocks until we got to a 20 metre cave where you could look at the waterfall from the other side. Anyone wanting to enter the cave needed to pay 10 pesos. As we were short on time I didn’t get to go in unfortunately. 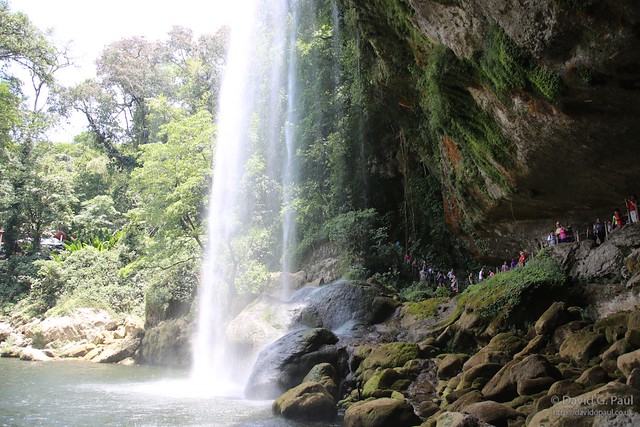 Back at the bus I realised how much warmer it had gotten since we had arrived. I ate a belgian bun for lunch and then we drove on for another 30 minutes until we were dropped off in Palenque at the Hotel Maya Tulipanes. By now the indoor temperature had risen to 32C, but outside it was 37C and 89% humidity, with the weather still getting warmer. To try and cool off a little I went for a swim in the hotel’s pool.

Some time later we went out to look around the town but didn’t really get far. We looked at a few nearby restaurants to see what meals were available and then headed back in the opposite direction and along the main road to where we found a supermarket. I bought a bottle of mango juice to take with me to the ruins the next day and headed back to the hotel to drop it off before going out for dinner. 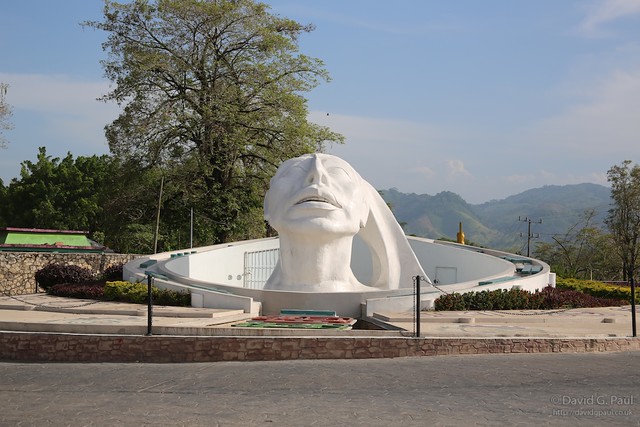 For the first time this trip we opted to have a starter – this was Chicken Tacos which came with a lot of lettuce covered in sour cream. For the main course I then went with grilled chicken with fries and vegetables. Unusually, at this restaurant they specified a suggested tip, and when giving change they had already taken the suggested tip out of the change which seemed a bit presumptuous.

By 19:00 we were back in the hotel and the room hadn’t really called down massively, but it was now bearable and potentially cool enough to sleep in later if we kept the air conditioning going on full.

Whilst back at the hotel I made use of their Wi-Fi to book a tour of the Uxmal ruins for the Sunday – a day we had nothing planned for. A few hours later it was finally chance to get some more sleep.