To continue our journey we now needed to take a domestic flight to Tuxtla. We got up at 06:45 and had a quick breakfast before being picked up at 08:00 by our guide. It was a quick journey to the airport, taking only 15 minutes, and within a further 30 minutes we’d checked in our cabin baggage and made it through to the departure gates. Unusually for security this time I had to remove both of my camera bodies from my backpack to go through the x-ray machine.

At 10:05 they began boarding the flight, and just after 12:00 we had landed in Tuxtla. It was very quick collecting baggage, but we tried to sort ourselves out before going through to arrivals as we knew we’d need sun screen for this next part of the journey. The driver didn’t speak English, but luckily one of the other passengers did a little so was able to translate a few words which helped us to understand a few of the instructions. We had been pre-warned though that this would be the case and had been assured that this wouldn’t matter. Not being able to give us instructions did seem a bit of an issue though, if he’d written down what he meant in Spanish we could have translated it, or drawing pictures may have helped.

We then set off for Sumidero Canyon, located in the Chiapas region of Mexico. In the UK it is illegal to use a mobile telephone whilst driving, though in Mexico it appears it is not as the driver briefly spoke on his phone whilst hurtling around numerous bends of a winding road at speed. 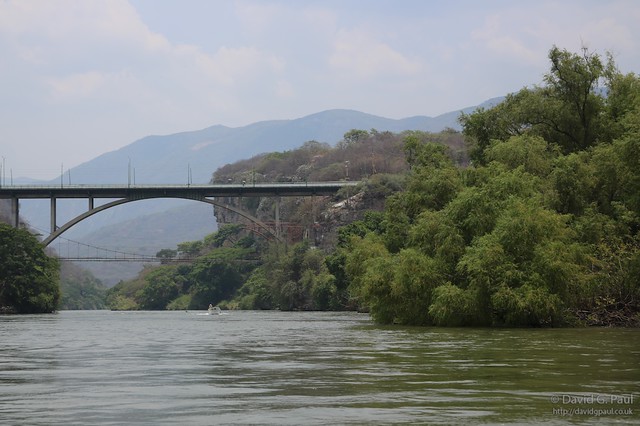 We boarded the small boat on the Rio Grijalva at 13:00 and for the next two hours we were on a tour with no English speaking guide again. For the first part of the journey the shore was quite flat, but eventually as you pass under a road bridge across the river (which we’d driven over earlier) it turns to high canyon walls. 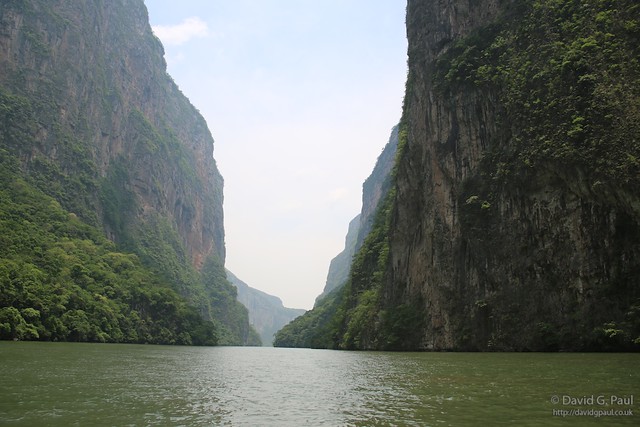 We made a few stops along the way – to see a crocodile, vultures, the highest point in the canyon, and a statue of the Maria de Guadaloupe. We saw quite a few other birds such as pelicans and cormorants, but we didn’t slow down or stop to see them. 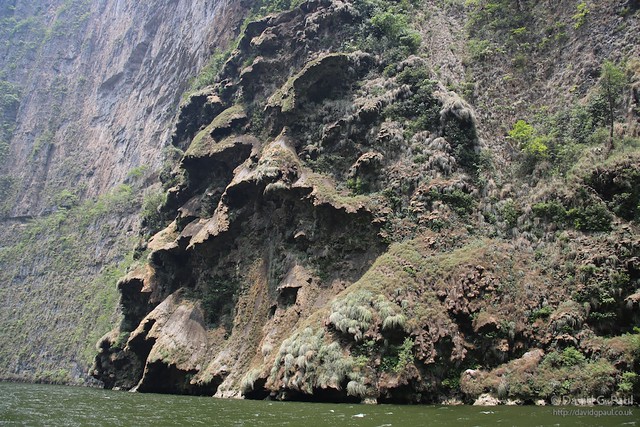 On occasion when the boat stopped the guide gave a description of the area, or some other sort of information, but I couldn’t say what he was saying as he only spoke in English. At two of the stops there was an awful lot of talking going on, but we had no idea what we were being told. So much for not needing an English speaking guide on this day, and being told we wouldn’t miss anything by not having one. 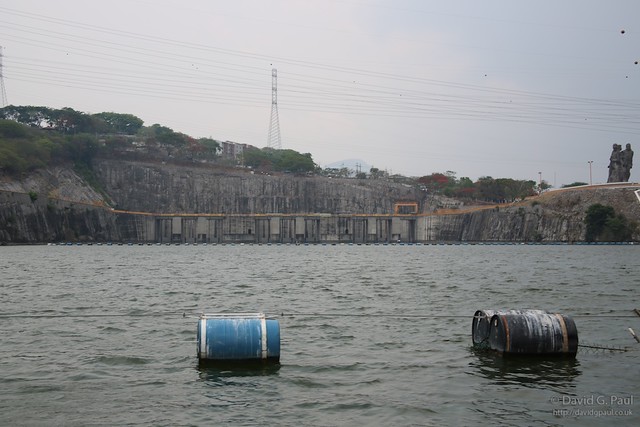 Eventually we got to the Chicoasén hydroelectric dam which meant we could go no further. At this point it was halfway into the tour and another boat was there selling cans of something which was a dark brown colour called “Indio”, and also packets of doritos. Although it was now 14:00 and we hadn’t eaten yet I didn’t really want to trust the food from a boat. Nothing on it looked particularly clean and when travelling abroad it’s important to be sensible about what you eat (even though I’d still recommend trying the local delicacies). 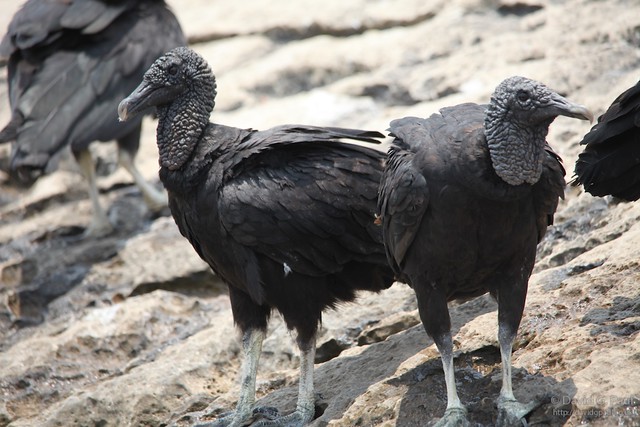 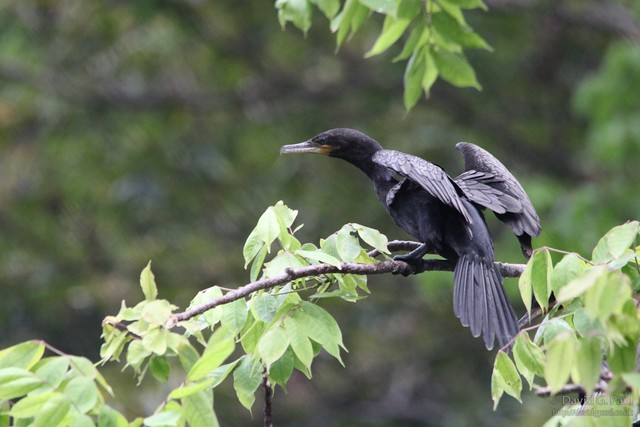 On the way back we got about a quarter of the way before stopping briefly to allow us to photograph pelicans, egrets, cormorants and herons on the shore. This was a brief stop and shortly after it started to rain – we then didn’t stop again until just before the moorings where a hat was handed around to give the driver a tip. I wasn’t really that impressed with the quality of the tour as the driver wouldn’t slow down for any wildlife we saw, and didn’t even make much of an attempt to ensure both sides of the boat got to see the same things as you would expect on other tours. Based on this I didn’t tip the driver as much as I would have normally.

Once back ashore it was then a 5 minute drive to the centre of a small city named Chiapa de Corzo. This city was originally named Chiapa de los Indios, but was later renamed after a politician. Although initially a Spanish settlement, and later left to the indigenous peoples and the Dominican friars, the site of this city was settled upon far earlier. It is believed that it was settled on at least as early as 1400 BC, and is of archaeological importance as it shows evidence of an early Mixe-Zoque-Olmec culture, before the split from Olmec civilisation. 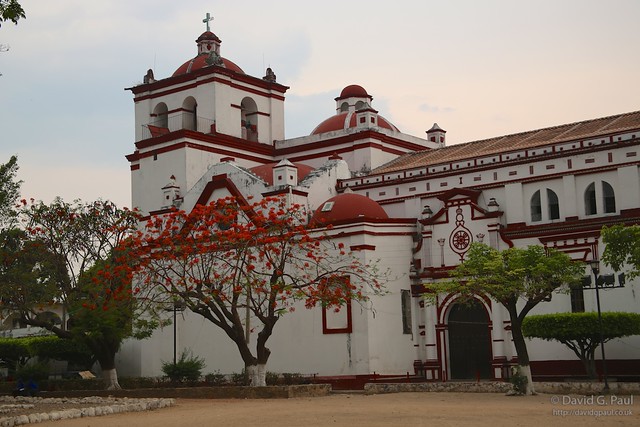 Once there we had until 16:00 to look around (so around 50 minutes, though it took quite some effort to determine that was what the driver was telling us). To start with we wandered over to the Santo Domingo church and looked around from the outside – it appeared that the church was not open. We made our way back to the main plaza and looked in some of the shops. Having not had anything to eat or drink since breakfast we both bought a drink from the corner shop, and then a Duo Snickers from one of the other stores. The price difference is quite amazing – the bottle of Fanta I bought was only 8.50 pesos, whereas the Snickers was 23 pesos (equivalent to 96 British pence)! 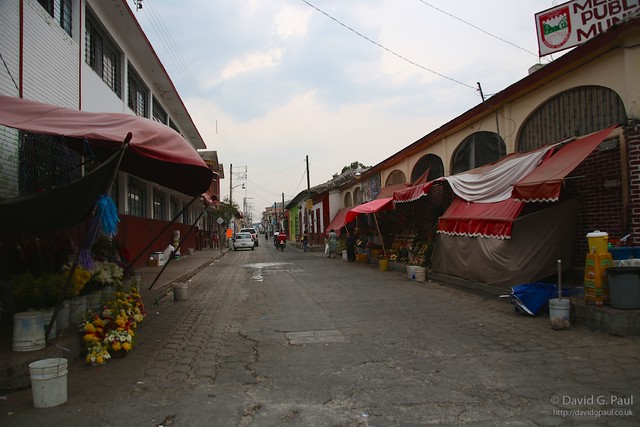 After sitting down for a time we then wandered around the plaza some more, taking photographs of the clock tower and the La Pila Fountain, until it started to rain again. This time it was far heavier than when we were on the boat so we headed for cover. Eventually we decided to head back to the coach 10 minutes early.

Once everyone was back we headed off along a road into the mountains. This road weaved around the edge of the mountain as it took us higher and higher, but eventually we could no longer see down into the valley below as the rain got heavier and the clouds descended below us. Along this road there were various signs, which people familiar with the highway code would know indicate that you’re not supposed to overtake. It seems our driver, and many other drivers didn’t seem to realise what this sign meant, nor that you shouldn’t straddle both lanes and overtake in heavy rain on a winding road with a very long drop on one side.

Finally we arrived in San Cristobal de las Casas at 17:00 and dropped off the Spanish family that was in the same coach. Shortly after we made it to our hotel, Rincon del Arco. The city has a very obvious Spanish colonial feel to it with it’s cobbled roads around the centre of town and the general architecture of the buildings with iron balconies and red roofing tiles.

After dropping off our bags we headed out to look around the town and to find a restaurant to finally get some proper food. In our attempt to find the road we’d seen earlier with restaurants all along it we came across a plaza with a church that was high up – we asked for directions to the Zocalo and soon found the road we had been looking for. 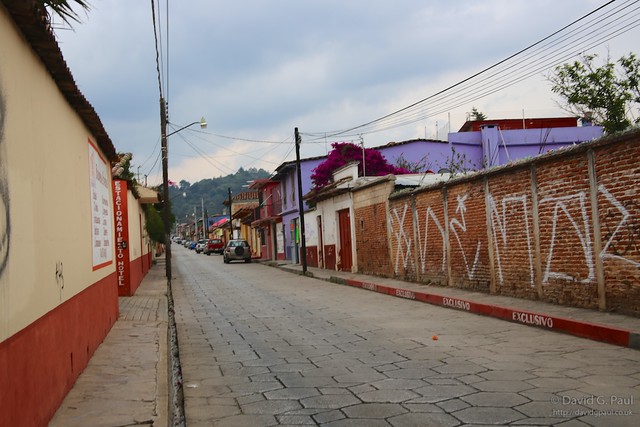 After looking at several restaurants we decided on Cafeteria del Centro which was through an archway into a small, hidden square. Looking at the menu the most appealing item was the Pechuga Empanizada (breaded chicken breast) which I had with a bottle of Coca-cola for 105 pesos.

Over the road from the restaurant we visited the supermarket to get a large chocolate doughnut for dessert, some water for the next few days, and also an extra cake for the next day just in case we couldn’t get lunch. As we walked further up the hill we eventually found another shop selling snickers bars so bought a few extra of those too, also in case of any days without lunch. By the time we got back to the hotel it was 19:15 and time to relax.